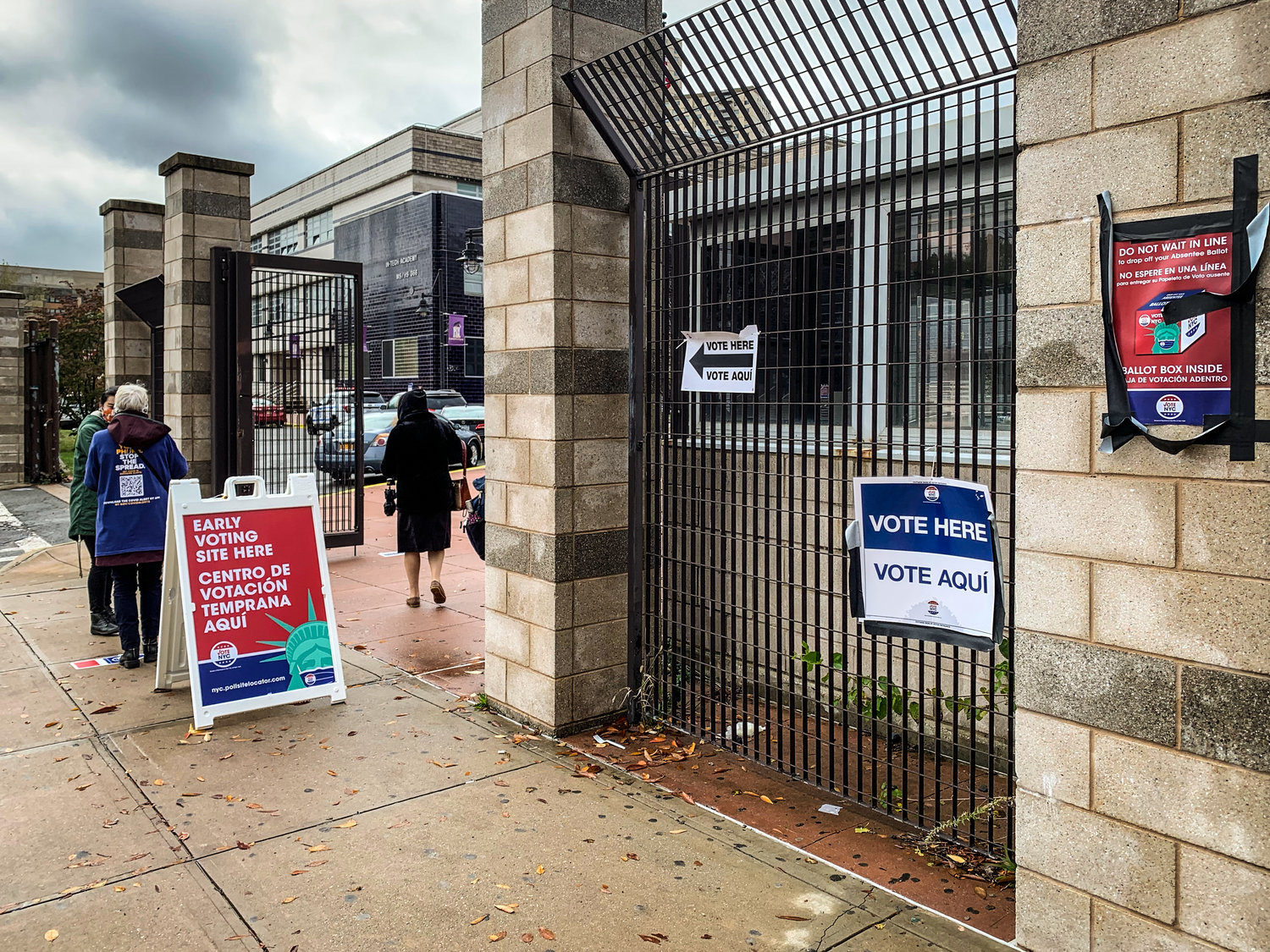 IN-Tech Academy saw thousands of voters over a week of early voting — part of more than a million who turned out early in New York City. That prompted election officials to expand hours while activists called for more locations in future elections.
HIRAM ALEJANDRO DURÁN 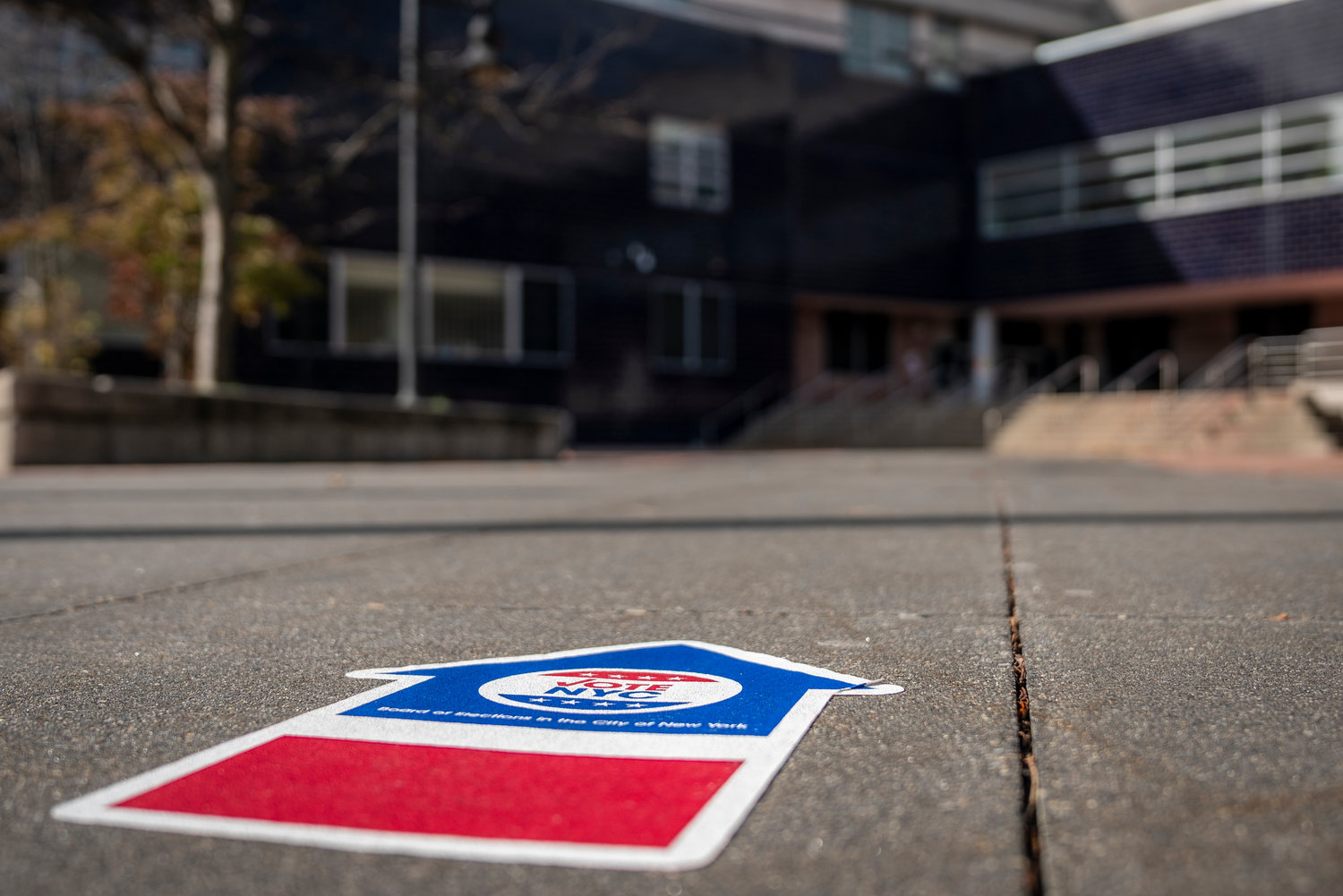 It was New York’s first major election with early voting, and it didn’t go to waste. More than 100,000 people turned out to vote early in the Bronx, including thousands at IN-Tech Academy on Tibbett Avenue.
HIRAM ALEJANDRO DURÁN 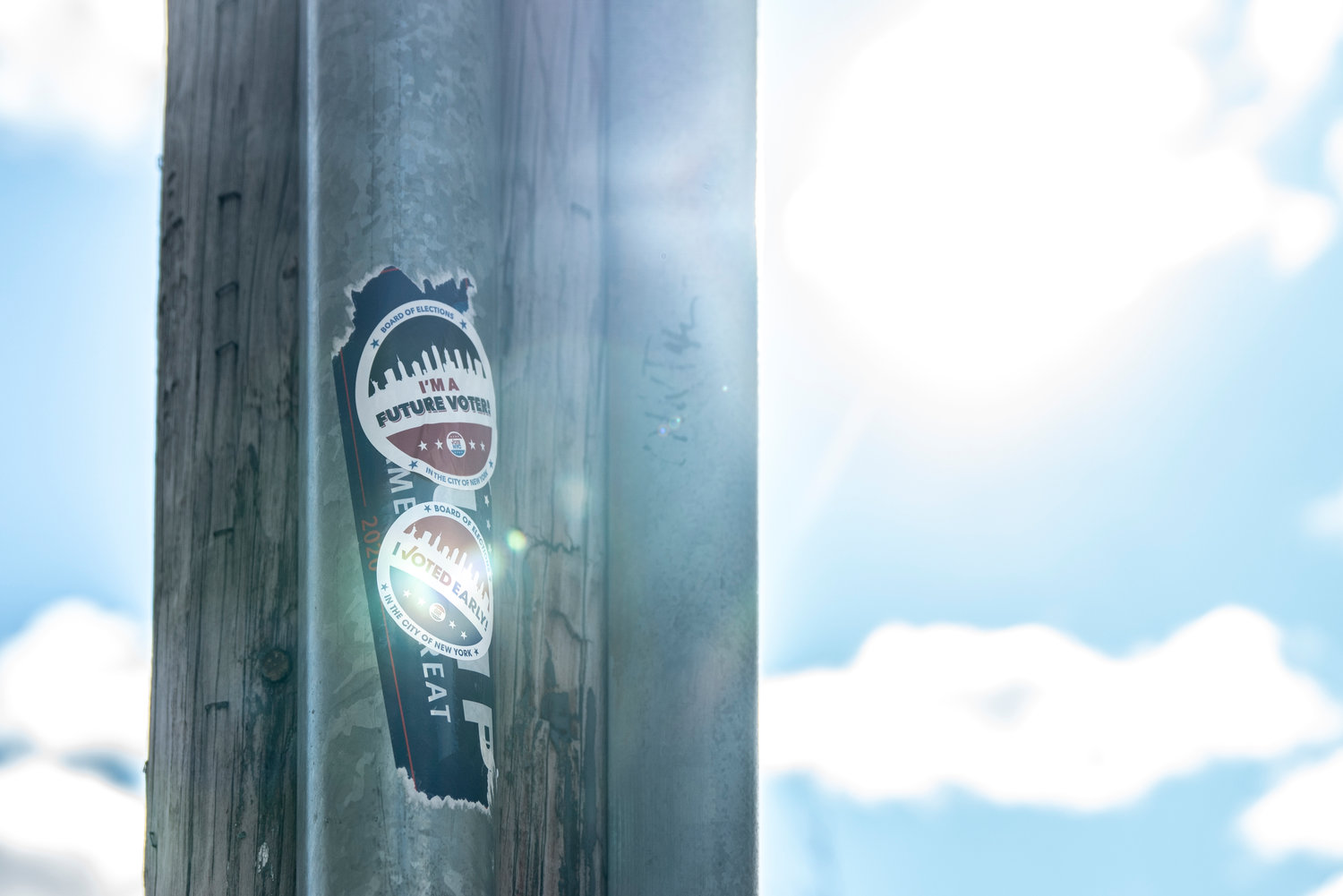 While horror stories of hours-long lines dominated social media, voters at IN-Tech Academy, for the most part, enjoyed a speedy voting process. More than a million voters turned out to vote ahead of Election Day — so many that weekend hours were extended to allow more people to get in and out of the polls.
HIRAM ALEJANDRO DURÁN
Previous Next
By KIRSTYN BRENDLEN

For the first time in New York’s history, voters cast ballots early in a presidential race. And it’s a process that has become more eventful than anyone could have guessed.

Last fall, the state conducted an early voting trial run, but without a big-ticket election on the ballot, it may not have been a good bellwether for what was to come: The pressing importance of early voting in a presidential election that’s happening in the middle of a pandemic.

Election officials urged voters to cast absentee ballots during the June primary, especially with much of New York still under economic lockdown orders because of the coronavirus. The elections board ultimately sent seven times more ballots than in “normal” years.

Some voters, however, didn’t receive their absentee ballots in time, or didn’t receive them at all. The rules governing ballots received after Election Day were changed last minute, and the elections board finally started counting ballots days after they were scheduled to, delaying results and frustrating voters and officials alike.

As absentee ballots began arriving in parts of the city last September, similar concerns started to arise: Some people found their neighbor’s ballots in their envelopes, leaving them confused about what they were supposed to do. Postal officials said they expected to struggle delivering all the election mail.

And some federal officials — including President Trump himself —  openly doubted whether mail-in voting was safe at all, despite historic low numbers of fraud in past mail-in voting.

So with coronavirus cases falling, New York instead turned to early voting. For many voters in this part of the Bronx, the hotspot was IN-Tech Academy on Tibbett Avenue, where a little more than 40,000 people were assigned to cast their ballots ahead of Election Day. It was ultimately one of the less-crowded locations in the city. Monroe College on Grand Concourse, where some Kingsbridge Heights voters were assigned, had 20,000 additional voters assigned there. In Manhattan, more than 100,000 people were assigned Robert Wagner Middle School in the Upper East Side as their early voting location.

On a cold and rainy afternoon two days before early voting ended, there was nearly no line at IN-Tech. Voters walked quickly in and out of the school, exiting with “I voted early” rubber bracelets and stickers.

Carol Greif said she hadn’t waited at all.

“This is my home, this is my country,” Greif added. “I’m hoping for a better four years.”

Carol Li, a first-time voter, said she traveled to IN-Tech after hearing reports of long lines in other parts of the city. But, while she said the inside of the building was a little crowded, it only took her a few minutes to get in and out.

“I feel like I wouldn’t have come on the day of, because it would have been so crazy,” Li said.

It was a little crazy in other parts of the city, where crowds looking to get a head start on voting stood in cold and rainy conditions for hours in lines wrapping around and blocks — all of which eventually found itself plastered on social media. Gov. Andrew Cuomo and Mayor Bill de Blasio both criticized the city’s election board for being unprepared while determined would-be voters sat on folding stools and shared umbrellas.

One IN-Tech poll worker said she moved as many as 8,000 people through the booths in the school’s library over the course of six days.

“I kind of suspected it would be really crowded on the day,” said another voter, Andrea Anthony. “I worked this morning, I took the afternoon off just to do this.”

As she scanned her ballot, Anthony noticed the counter on the machine reporting her as the 1,871st person to use the machine that day.

All told, Anthony said, the entire process of voting took about 15 minutes. “I feel fortunate.”

On Twitter, some local accounts asked followers to report wait times on each voting day.

Most days, relatively short wait times were reported — about an hour maximum. Even on Oct. 24, the first Saturday of early voting. That day, nearly 15,000 people voted early in the Bronx, and almost 94,000 voted early across the city.

By the seventh day, the elections board announced more than 800,000 people had cast their votes.

Although IN-Tech experienced what appeared to be a smooth week, activists and elected officials are calling on more early voting sites and further accommodations in future years. While a 40-minute wait might feel short for some, it can be prohibitive for others with disabilities, as well as older people, or even those waiting with small children.

No matter what the obstacles are, many voters will move heaven and earth to ensure their ballot is cast. Like first-time voter Saphira, who visited IN-Tech last week.

“Within my 30-something years, you know, I’ve never voted,” she said. “I just didn’t think it was something of a big deal until this year. The virus going around made such, such a huge impact.”