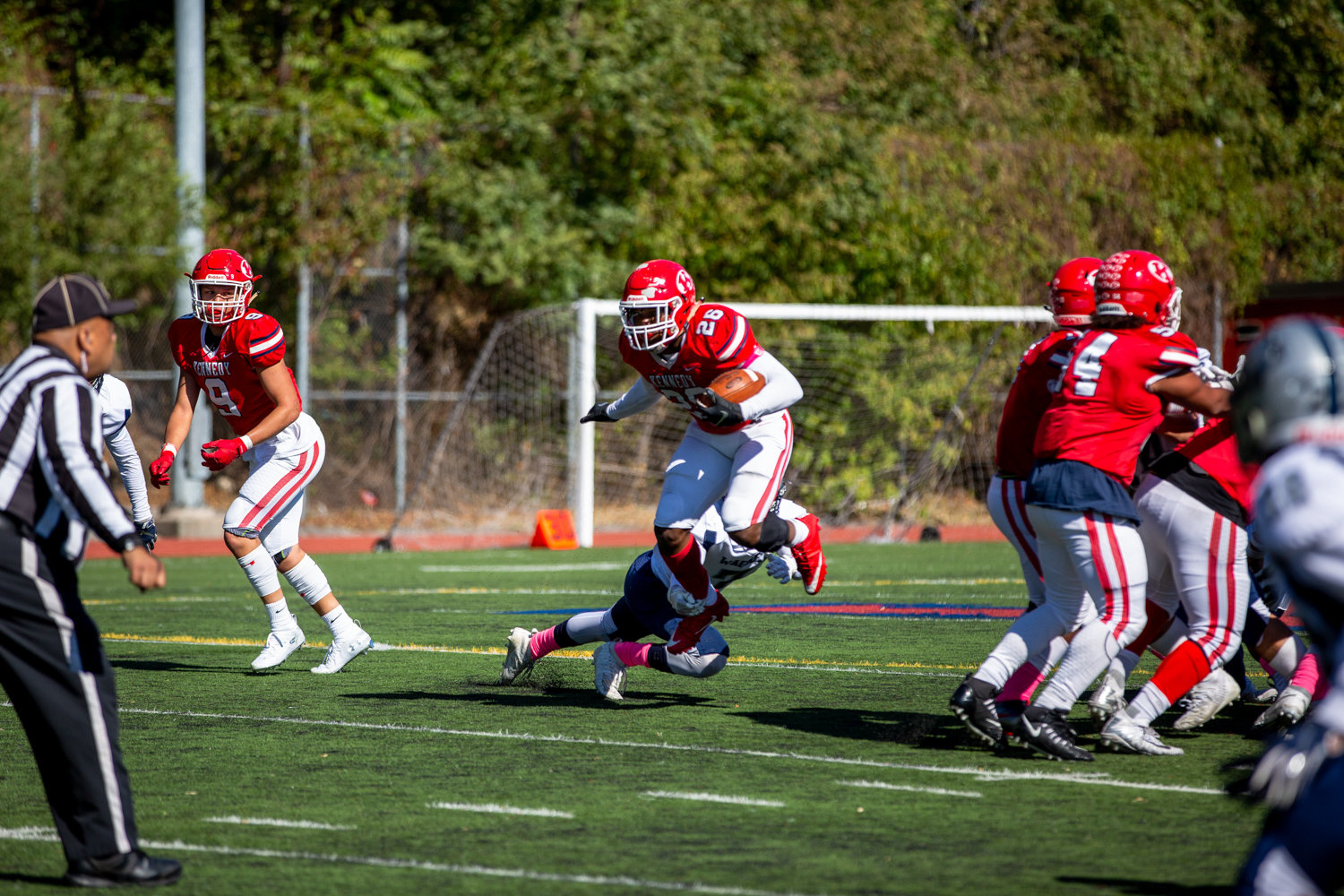 Kennedy’s Emmanuel Nkwocha runs over a hapless Wagner defender during his 267-yard, three-touchdown day in the Knights’ 36-20 win.
EIAN KANTOR 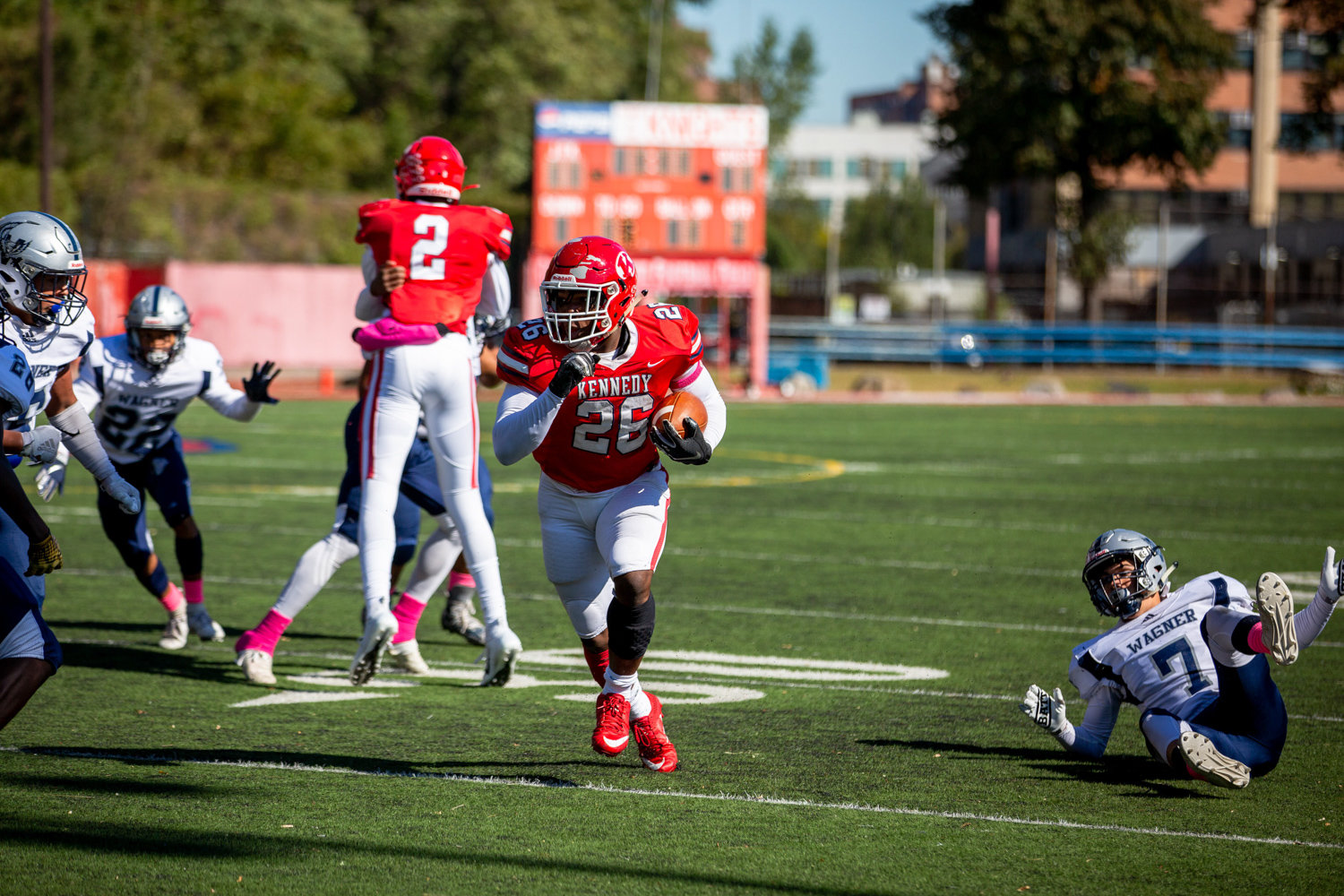 Kennedy’s Emmanuel Nkwocha finds a gaping hole in the Wagner defense during the Knights’ 36-20 victory over the Falcons last Saturday.
EIAN KANTOR
Previous Next
By SEAN BRENNAN

It was a message from his junior running back, Emmanuel Nkwocha.

“He texted me at five in the morning and told me he was nervous about the game,” Vega said. “This was going to be his first time starting on offense. So I told him, ‘Listen, just be you. Just be great.’ And he was great.”

Kennedy was already behind the eight ball even before Saturday’s kickoff as two mainstays in the Knights’ vaunted backfield — Chris Boadi (fractured foot) and Karamogo Sylla (ankle injury) — were sidelined, leaving Nkwocha to handle most of the heavy lifting.

But by the end of the Knights’ first offensive drive, Nkwocha was no longer nervous about his starring role. Instead, it was the Wagner defenders who were apprehensive as Kennedy’s bruising back ran around, through and over Falcons’ defenders all afternoon. That was en route to a robust 267-yard, three-touchdown day as Kennedy routed Wagner 36-20 to run its record to 6-1 on the season.

“I felt like I had a lot on my shoulders because we were without Chris and Karamogo,” Nkwocha said. “Coach told me there was going to be a lot on my back. So I thank God for my coaches because they got me right for this game. I was mentally prepared and physically prepared.”

The same could not be said for Wagner’s defenders.

Their nightmare began on the first drive of the game when Nkwocha — all 6 feet and 200 pounds of him — capped an eight-play, 74-yard scoring drive with a 19-yard touchdown run for a quick 6-0 Kennedy lead.

On Kennedy’s next drive, however, Nkwocha fumbled on the 1-yard line, a miscue which only made him more determined. So when the Knights got their hands on the ball a third time, Nkwocha rumbled 27 yards for a second score on a fourth-and-8 to put the Knights up 14-0 after the two-point conversion.

All day it seemed like Nkwocha toyed with Wagner’s defenders as it usually took several of them to bring him down.

“He’s a tough guy,” Kennedy quarterback Chaze Anthony Milton said. “He works in the weight room all the time, so it’s not surprising to see him drag two or three defenders down the field.”

Kennedy lost nothing offensively when Nkwocha took the occasional breather as David Obeng-Agyapong stepped in and delivered his own dominating performance.

A prime example came late in the second quarter with the Knights stuck on their own 6-yard line and facing a daunting second-and-34 for a first down. But Obeng-Agyapong simply took a toss from Milton, scampered to the right sideline, and raced 94 yards virtually untouched for a touchdown and a 22-0 Kennedy lead.

“It was a concern not having Chris and Karamogo but we have an abundance of athletes,” Vega said. That allowed Kennedy to move Obeng-Agyapong to running back.

“And he stepped up big,” the coach added.

It was one of those game-changing runs a player dreams about that came true for Obeng-Agyapong.

“You hear the crowd yelling and the coaches screaming ‘go, go,’ and all you’re thinking about is the end zone,” said Obeng-Agyapong, who rushed for 111 yards. “But without the blocks of teammates like Jose Rodriguez, Rafael Rodriguez and Michael Sarpong, I wouldn’t have been able to get where I was going.”

Wagner managed a touchdown just before the half as Kennedy led 22-6 at the intermission. But as soon as the third quarter commenced, Nkwocha was back at work taking a handoff on first down and racing 52 yards for a score and a 30-6 Kennedy cushion.

And yes, he did run over a few more Wagner defenders.

So does it feel as good to trample an opposing player as it does to score?

“Yeah,” Nkwocha said, laughing. “It kind of does.”

Currently sitting in fourth place in the 16-team City Conference, the Knights now turn their attention to their Oct. 25 game at first-place Curtis. But Vega tried to downplay the PSAL’s showcase game of the week.

“I don’t know how good we are yet,” Vega said. “But we’ll find out Friday when we go out to play a very tough Curtis team on Staten Island. We’ll be ready to go.”

Obeng-Agyapong, however, said the Knights are ready for the ultimate Curtis challenge.

“We’ve been working toward this week since last offseason,” he said. “We’ve been lifting and working out since last December, so I know we’re ready for Curtis.”