Despite signage on Kelly Commons, the vehicles keep coming 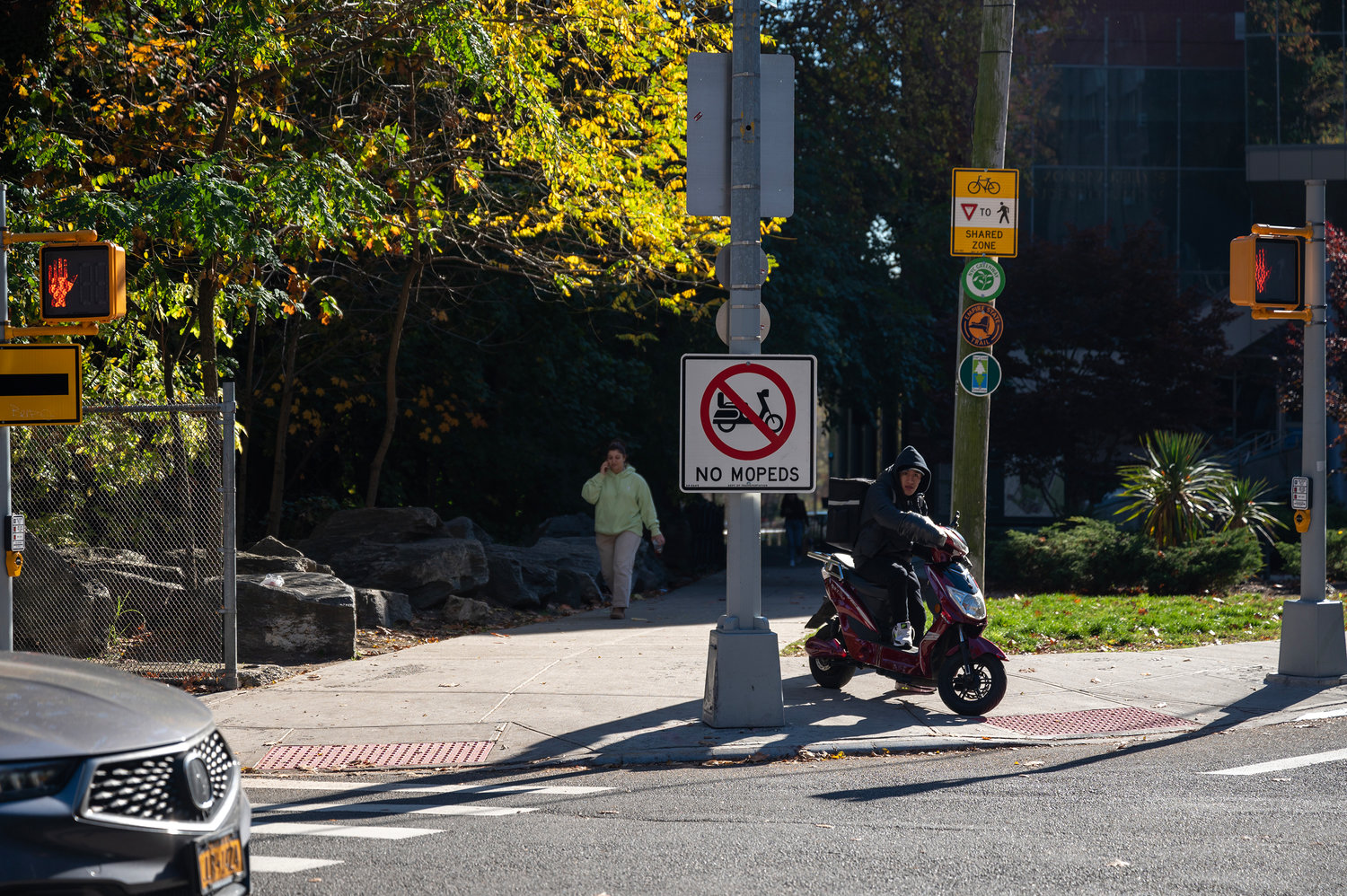 A delivery driver riding a moped on the pathway near Manhattan College’s Kelly Commons is oblivious to the “No Moped” sign that was recently put up there.
Hiram Alejandro Durán 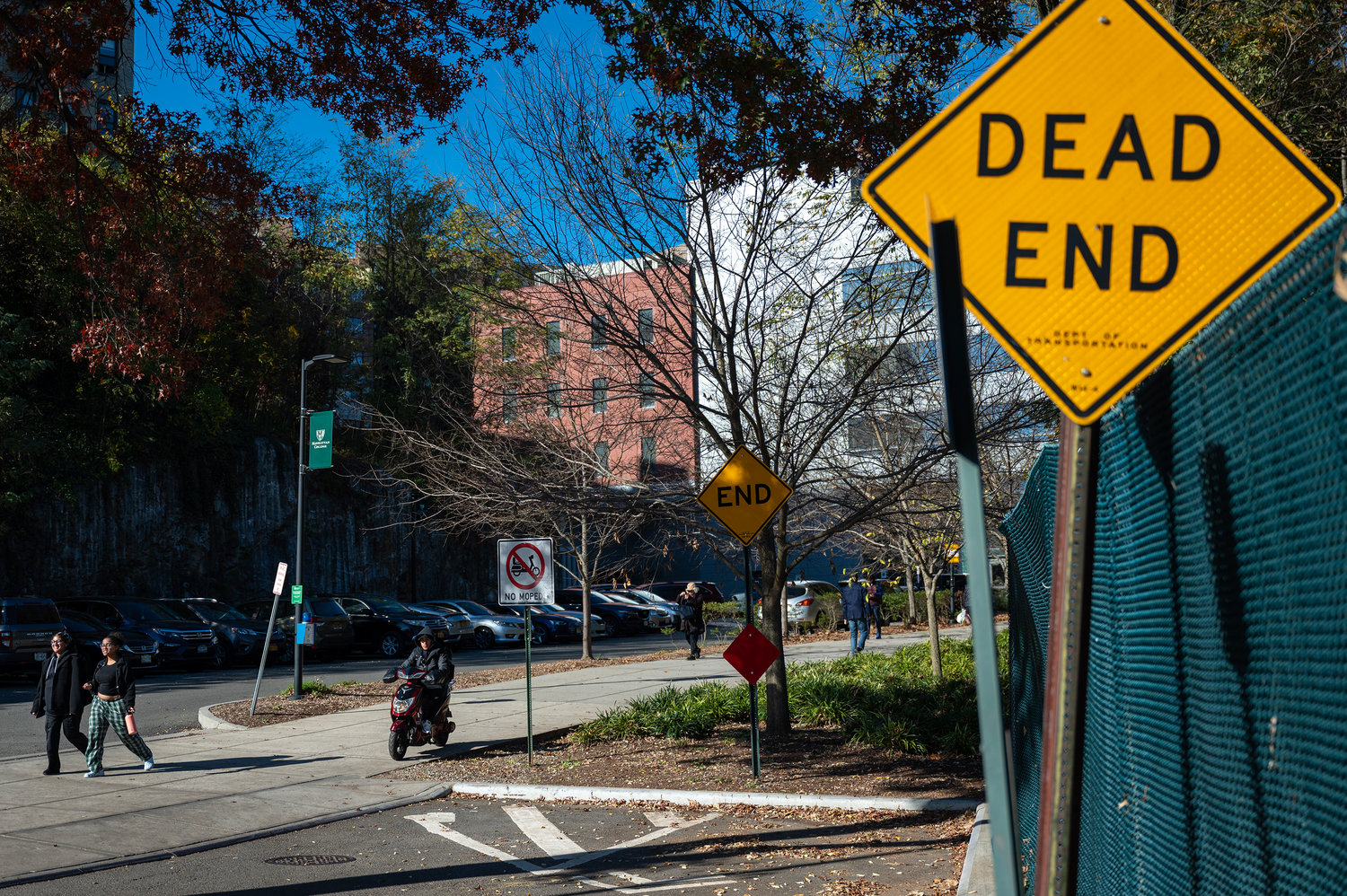 The signage on the pathway near Manhattan College now has signs that warn against moped usage and the end of the pathway’s access to mopeds.
Hiram Alejandro Durán
Previous Next
By Stacy Driks

It was persistence on Assemblyman Jeffrey Dinowitz’s part to ensure the pathway near Manhattan College, Kelly Commons building was safe. But even though there is a sign there now warning against the usage of mopeds, it seems like it will take some time to get the word out to drivers.

When summer ended and fall classes were preparing to start up, the city’s transportation department’s Bronx interim commissioner Keith Kalb was made aware of the pathway near Kelly Student Commons that allows mopeds, bicycles, other motorized vehicles and pedestrians to share the same path.

The board of Waldo Gardens has complained about the dangers of sharing the path. Joan Kaufman, the board chair of Waldo Gardens, led the charge to install caution signs., but it took some time.

“They (DOT) told us they don’t make a sign saying no mopeds, I mean — what’s the big deal?” Dinowitz said.

In a letter sent to Dinowitz, Kalb claimed they don’t have a sign that would benefit his request.

Through research, the assemblyman’s office found that on the West Side Highway in Manhattan, there are similar signs. In fact, they specify no e-bikes, motor vehicles, and e-scooters.

“Once we showed them that, it was much harder to say no,” the assemblyman said. “We got it put up.”

The agency’s Bronx engineering office reviewed the case, and through their evaluation, the sign in Manhattan isn’t a candidate. Instead, installing a “No Moped” sign on each end of the pathway was more appropriate.

There are now “excellent signs on both ends,” Kaufman said.

Allegedly, couriers were zipping through, passing by women with baby carriages and students.

Two signs on each end of the path state mopeds are not allowed. And there is an “End” sign as well. It is similar to a “Do Not Enter” sign signaling drivers that they are strictly prohibited from entering the street.

“This signage is important because the pathway is a heavily used cut-through to connect Kingsbridge and Riverdale,” Dinowitz said in his weekly digest.

“There has been a growing problem of speeding mopeds that put pedestrians at risk.”

Ironically, there have been heated debates over whose life is most at risk. One professor at the college claims that this pathway is the safest. Many of the mopeds are couriers doing their job. Accidents can happen on Broadway, which would be the alternative route to travel now, they said.

In the first week of November, the sign was installed. However, the sign does not seem to be doing the job everyone thought it would at least not in the early going. This can be for many reasons and not necessarily purposeful for breaking the transportation rules.

It became a habit, as most couriers traveled down the pathway since COVID.

“Unfortunately, I did not see a difference in the motorbike traffic — I think the one sign near Irwin (Avenue) was a little too high for a biker at a lower level to take notice of while driving,” Douglass said.

Kaufman is furious that the hard work Dinowitz did and her fight towards this during the summer — did not pay off. She believes law enforcement needs to step up now.

Yet all the police said when The Riverdale Press reached out to them in September about traffic agents visiting the site was that residents should call the 50th Precinct. And from there, they will pass on the message to their colleagues in various precincts.

Waldo Gardens residents, specifically the nine board members who met with The Press in August, believed that Manhattan College public safety department would take care of the issue and push forward with the assemblyman’s claim.

The Assemblyman believes there should be enforced. He believes if couriers start to notice traffic agents, it might get people out of the habit of traveling down the path.

Dinowitz told The Press that mopeds are a problem in many areas, not just between Manhattan College Parkway and Irwin Avenue.

Speeding mopeds, e-bikes, and even cyclists were considered dangerous to passersby on the pathway.

Debbi Dolan, who has led nature walks in Van Cortlandt Park for the past decade. wrote a letter to the editor to The Press in September explaining her experience with sharing the pathway.