No more school for longtime teacher 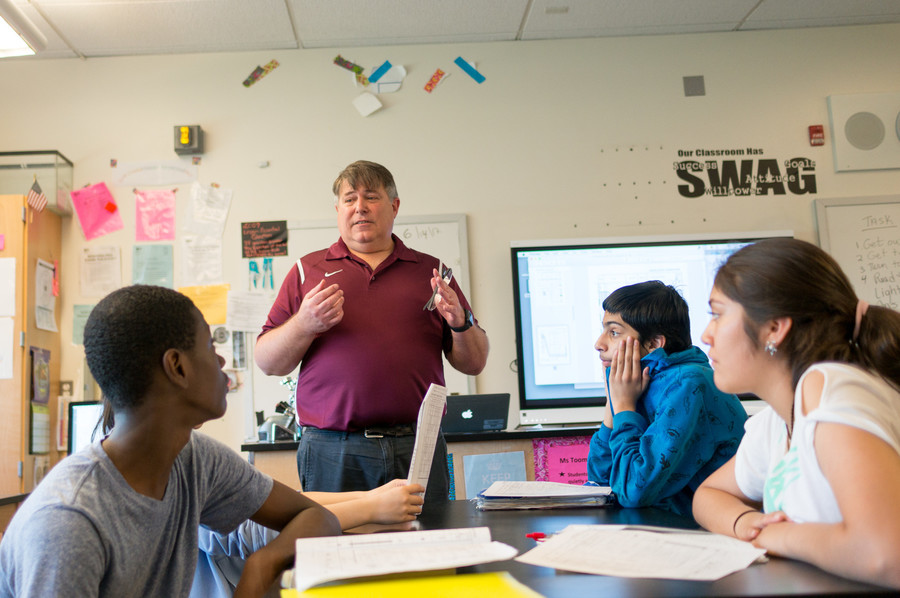 Michael Halpern reviews topics that will be on the New York State Regents exam for earth science. After 32 years, Halpern is retiring from P.S./M.S. 95 Sheila Mencher. He is the nephew of the late Sheila Mencher, who the school is named after.
Julius Constantine Motal
By Lisa Herndon

It was the day before the earth science Regents exam, and Michael Halpern gives his students some final tips before taking the test.

This Regents exam is a bittersweet one for Halpern as, after 32 years of teaching at P.S./M.S. 95 Sheila Mencher, he is set to retire.

“I’ve probably cared about the building more than most people,” said Halpern, who over the years has taught a wide variety of subjects like history and science. “I’ve been in it, and I’ve seen it for most of my whole life.”

Halpern himself is a graduate of the school. And, so was his mother. His grandmother was a member of the parents’ association.

But Halpern’s ties to the school go even deeper — Sheila Mencher, a former school board member to whom the school was named after in 1995, was his aunt. He even met his future wife Pam, a former fellow teacher, while working there.

Education is “the family business,” joked Halpern, 55. It also was a career he swore he would never enter. When he attended P.S./M.S. 95, he wasn’t the best student academically.

After college, Halpern pursued a career working behind the scenes in sports television in the 1980s. Unable to find a full-time job in the field, he learned about a chance to work in television production with the school district in 1985.
To get the job, Halpern needed to earn teaching credentials since part of the job included teaching students part-time as well as producing videos.

The job wasn’t just teaching, Halpern said. It was making social and emotional connections with students he enjoyed the most. When the education department closed its studio in 1991, Halpern moved into teaching full-time.
He taught at I.S. 137 The Angelo Patri School, which has since closed, and went to P.S./M.S 95 in 1995.

Many of his former and current students praised Halpern as a committed and caring teacher who brought out the best in them, finding fun and innovative ways to get his lesson across to students.

Abdullah Abid, a rising senior at Stuyvesant High School, said Halpern inspired his interest in science, answering his many questions on the subject. When Abid was accepted at Stuyvesant — a specialized public high school located in Manhattan – Halpern was one of the first teachers he informed.

Halpern also challenged Abid and his classmates to think deeper about potential ethical dilemmas that would arise from scientific breakthroughs and to consider both sides of an issue — a philosophy Abid still carries today.

Abid recalled a class discussion when the students were discussing cloning and creating organs for patients who needed transplants.

“Mr. Halpern had no obligation to teach us about ethics in science that day, but he did out of his own love for science,” Abid said. “His lesson, on approaching difficult issues by examin(ing) both sides’ arguments is one that I have taken to heart in any debate or discourse that I have taken part in since then.”

Another former student, Hannah Kimerling, said Halpern pushed his students to do their best in everything they did.

“He taught me responsibility, the importance of teamwork, listening skills, patience and helped me to find new and enjoyable experiences,” said Kimerling, an incoming senior at DeWitt Clinton High School.

Halpern also supervised Kimerling at the Mosholu Montefiore Community Center where she spends the summer as a lifeguard.

“What stood out to me was that out of all my teachers and classes that I took (at the school), his class was always engaging,” Kimerling said. “He always made sure that everyone understood the topics being taught, and did his best to relate what we were learning to our lives.”

Carlie Morabito, a 2008 graduate, remembers Halpern as a teacher who has creative ways of getting his lesson across to students.

“I remember we were learning about Ancient Greece, and he said in order to learn about the people, we had to learn about their myths,” said Morabito, now a camp and after-school programs supervisor at the community center.

“After learning a bunch of myths about the gods and goddesses, we had to make trading cards. It was like our class’s version of Pokémon, except with the Greek gods.”

Peggy Chen, a current student, said she initially thought the course would not be useful and maybe even boring, but Halpern’s teaching style brought the topic to life.

“I find it really cool that I can now identify some rocks,” the eighth-grader said.

Principal Serge Davis, who worked with Halpern for nearly a decade, praised Halpern’s “ability of cultivating a love of science” in his students. More than 90 percent of Halpern’s students had passed the earth science Regents exam.

“It’s a true testament to his ability as a teacher and his willingness to share his knowledge,” Davis said.

Davis did not know Mencher, who died in 1993, but spoke of her legacy of service she brought to the school. Halpern, he said, continues the tradition.
Mencher also was a former parents’ association president as well as a teacher at the school. She went on to become a school board member, but never forgot her roots at the school. Halpern said his aunt made sure P.S./M.S. 95 had funding to support the school’s programming. After Mencher’s death, what had been called The Van Cortlandt School was renamed The Sheila Mencher Van Cortlandt School.

Although he is no longer teaching, Halpern said he plans to remain involved with students. He will continue work he started at the Mosholu Montefiore Community Center in 1991 by becoming its the youth services director. There Halpern will develop program and training staff for all after-school programs, the baseball league and fitness center.

He’s ready for the next chapter of his life, that building at 3450 Dekalb Ave., a key part.

“It always feels like it’s a part of me,” Halpern said of his years at P.S./M.S. 95.
“It’s definitely home. I’ve probably been in this building more than any place I’ve lived.”