No objections: These teens have their day in court 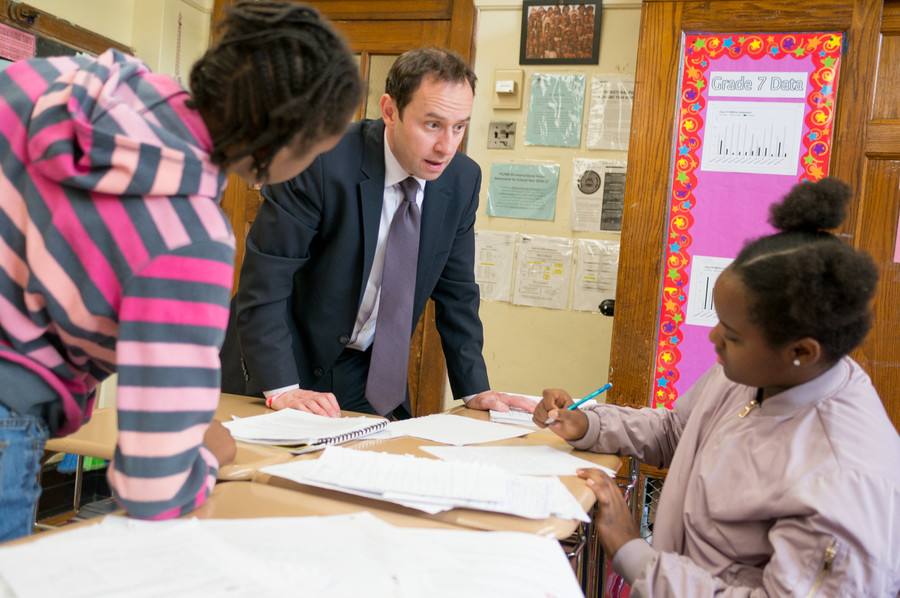 Attorney Daniel Padernacht, a Sheila Mencher P.S./M.S. 95 graduate, gives pointers to the defense on how to improve their performances for the Thurgood Marshall Mock Trial Competition that took place on May 12.
Julius Constantine Motal 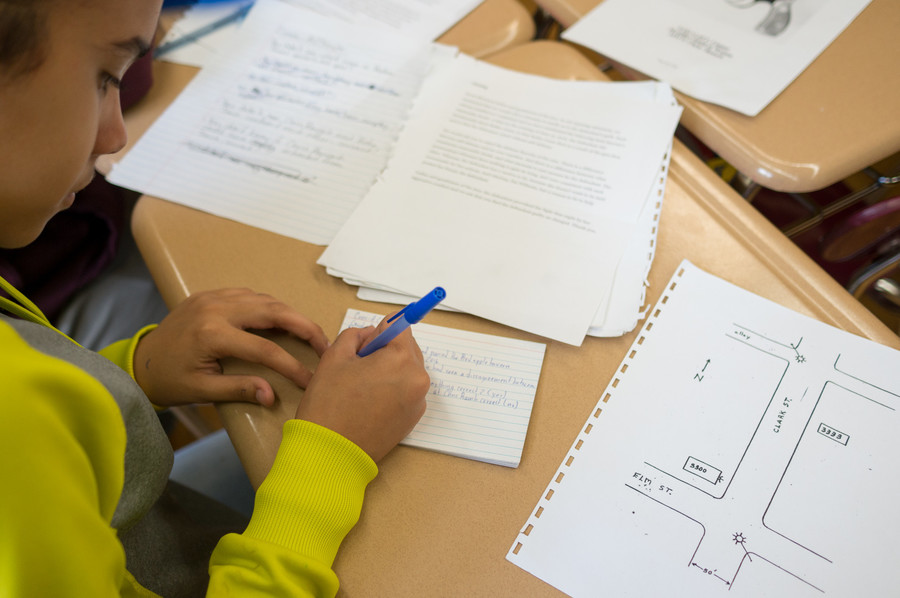 Sheila Mencher P.S./M.S. 95 students who played the role of prosecution attorneys will argue Chris Rausch deliberately shot the deceased Robin Jones. Rausch, played by one of the students, is charged with second-degree murder.
Julius Constantine Motal 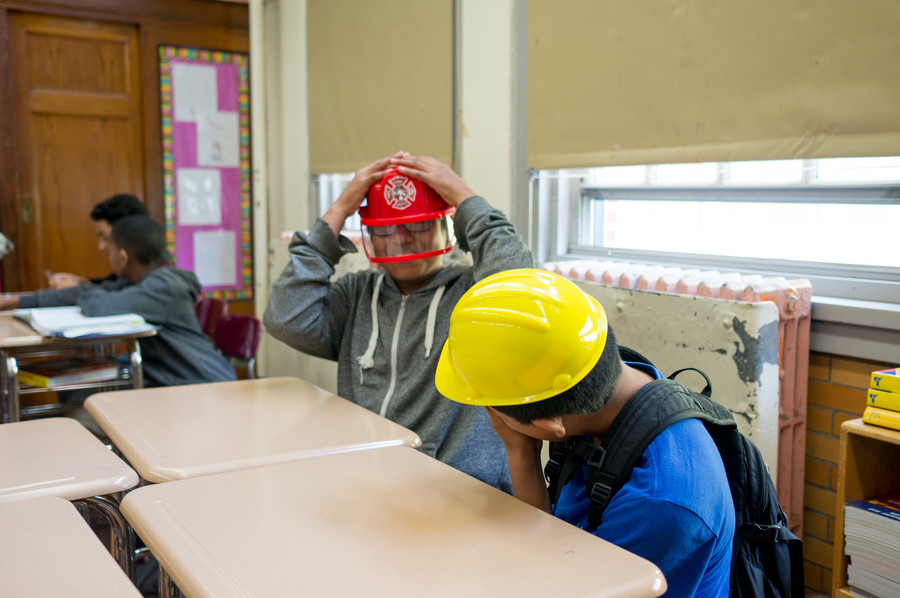 seventh-graders get into character as they take part in their last practice session for the Thurgood Marshall Mock Trial Competition. Some of the props included a police badge, firefighter’s hat and construction worker’s hat.
Julius Constantine Motal
Previous Next

In addition to learning the case, they have to get up and present the case, and that in of itself is a challenge because they get nervous. They forget what they want to say.”
By Lisa Herndon

It was the day before the trial of Chris Rausch, charged with the murder, in the second degree, of Robin Jones.

The shooting was self-defense, her lawyers said. The prosecution, however, claims it was murder with intent.

“All rise and come to order for the Honorable Diomarys Escano,” court officer Daniel Padernacht said. “We are here for the People vs. Chris Rausch. Please be seated.”

Anyone visiting this particular courtroom might find something odd, however. The defendant, witnesses, even the attorneys weren’t the people you’d expect them to be. In fact, they weren’t even adults. Instead, they were seventh-grade students from Sheila Mencher P.S./M.S. 95 in Van Cortlandt Village.

It was the day before they all were set to take part in the middle school division of the Thurgood Marshall Mock Trial Competition on May 12 at the Bronx County Hall of Justice. They worked with attorneys who volunteered their time to serve as coaches, and who offered final suggestions during the last practice session.

“It’s really fun, especially when we are arguing with each other and call ‘objection,’” said Benjamin Boateng, 13 who played a defense attorney. “I really want to be a lawyer when I grow up. So, this is an experience for me. I get to work with actual lawyers. So, one day, when I actually become a lawyer, I know what to do.

Classmate Jessica Anugwo, 13 ,who acted as an attorney for the prosecution, also plans to become an attorney.

“I wanted to join because my mom is like a lawyer,” Anugwo said. “I like asking questions and proving people wrong.”

Jaylynn McDougald, 12, who plays the defendant, said the competition “sounded exciting” and wanted to try it out, especially since the experience would be included in her transcript for when she applies to high schools.

Students really got into their roles. Clement Nunoo, 13 who played arresting officer Sam Connor, had a fake police badge on his shirt and mirrored sunglasses, which he removed with great flair just before he testified about arriving on the scene and smelling fresh gunpowder.

Another student, who played a construction worker and was a witness, came to the stand holding his hard hat. Another, who played a firefighter, carried his hat as he spoke before his peers. The attorney volunteers purchased nearly all the props for the class.

Yet, it was simply calling out “objection” that seemed to be the best part of the trial for many of them.

Lawyers object when they feel the other side is asking a question improperly or behaving inappropriately, Nunoo said.

“With objections, it takes them off of their train of thought,” Alex Williams, 13, said. When a team objects, it forces the other side to “think of something real quick” in order to respond.

They learned a lot from their coaches, local attorneys who volunteered their time. Padernacht, a real estate attorney and chair of Community Board 8, also is a P.S./M.S. 95 graduate.

This was his first year volunteering and said watching the teens perform their parts and seeing their excitement as they got into their roles was the best part of working with them throughout the school year.

“I’m just really proud of the kids and how far they have come in just a short amount of time,” said Padernacht, who took on the role of a court officer during the final prep session.

“They have absorbed so much. They’ve been able to take what we’ve taught them and really put it into practice.”

For fellow volunteer Diomarys Escano, working with students is a way to give back. And it’s a nice change of pace to her workday where she regularly works as an attorney. Escano and Padernacht gave the students background information on the law, the role of evidence, and tips on how to conduct themselves as attorneys during the trial. Escano played the judge during the final prep session.

The students sharpened their research and critical thinking skills, social studies teacher and adviser Matthew Pansy said. During the school year, participants visited the courthouses in the Bronx and even sat in on trials.

“It’s definitely matured them, and it brings out their leadership skills,” Andrea Faulkner, the school’s program coordinator, said.

“In addition to learning the case, they have to get up and present the case, and that in of itself is a challenge because they get nervous. They forget what they want to say.

“The ones that excel at it put on a magnificent performance.”

Although the Thurgood Marshall Mock Trial Competition has been in existence for more than a decade, this is only P.S./M.S. 95’s second year in the program. In addition to the group of 15 seventh-graders, the school has 30 eighth-graders who also will take part in the mock trials.