Despite CB8, Dinowitz protests, city ready to start work in the coming weeks 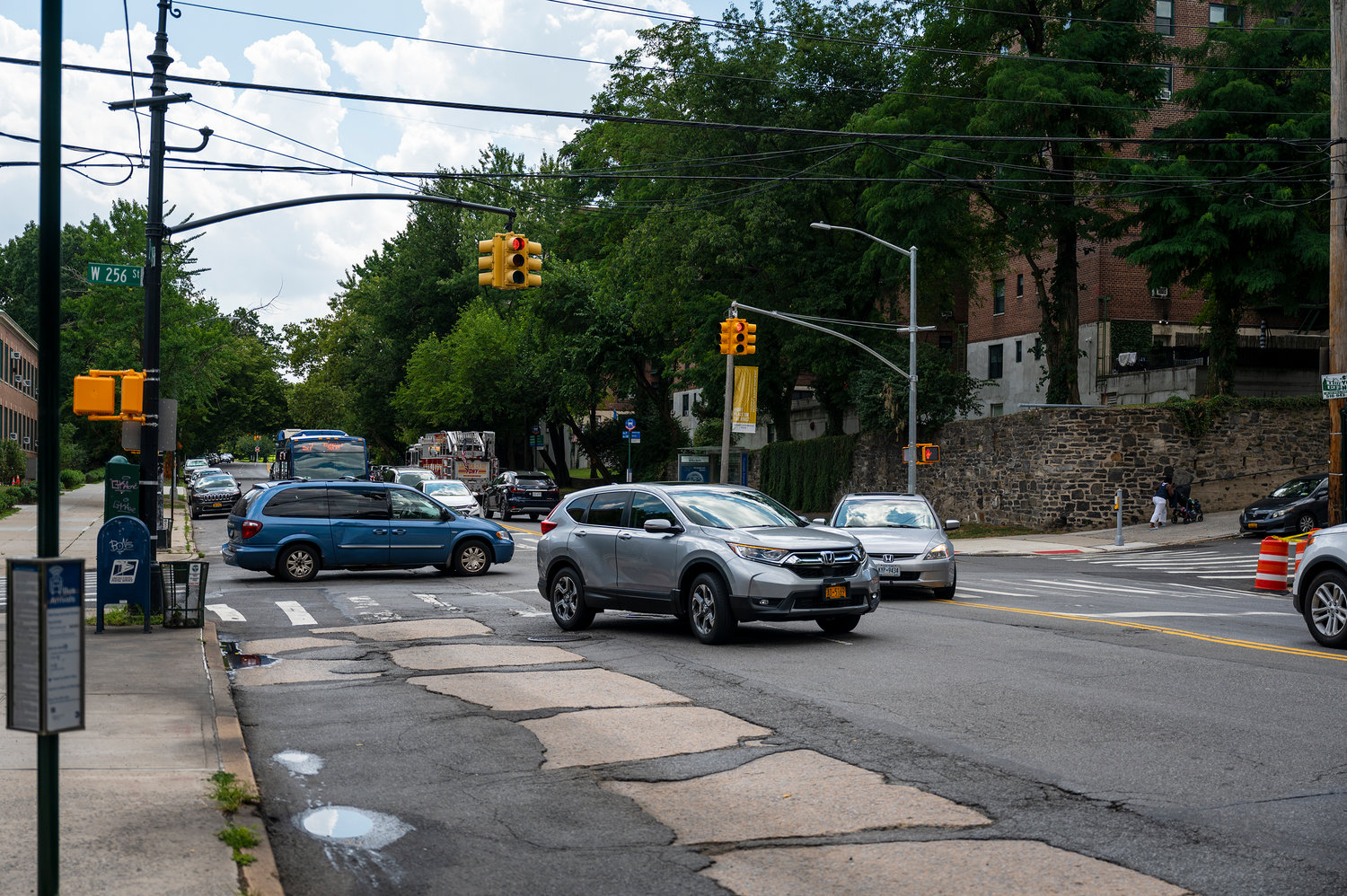 Stretching from West 254th to West 263rd streets is the intersection where the city’s transportation department says is burdened with a high number of traffic accidents and collisions. Their prediction is that by narrowing the road, those numbers will decrease. However, some in the community beg to differ.
Hiram Alejandro Durán 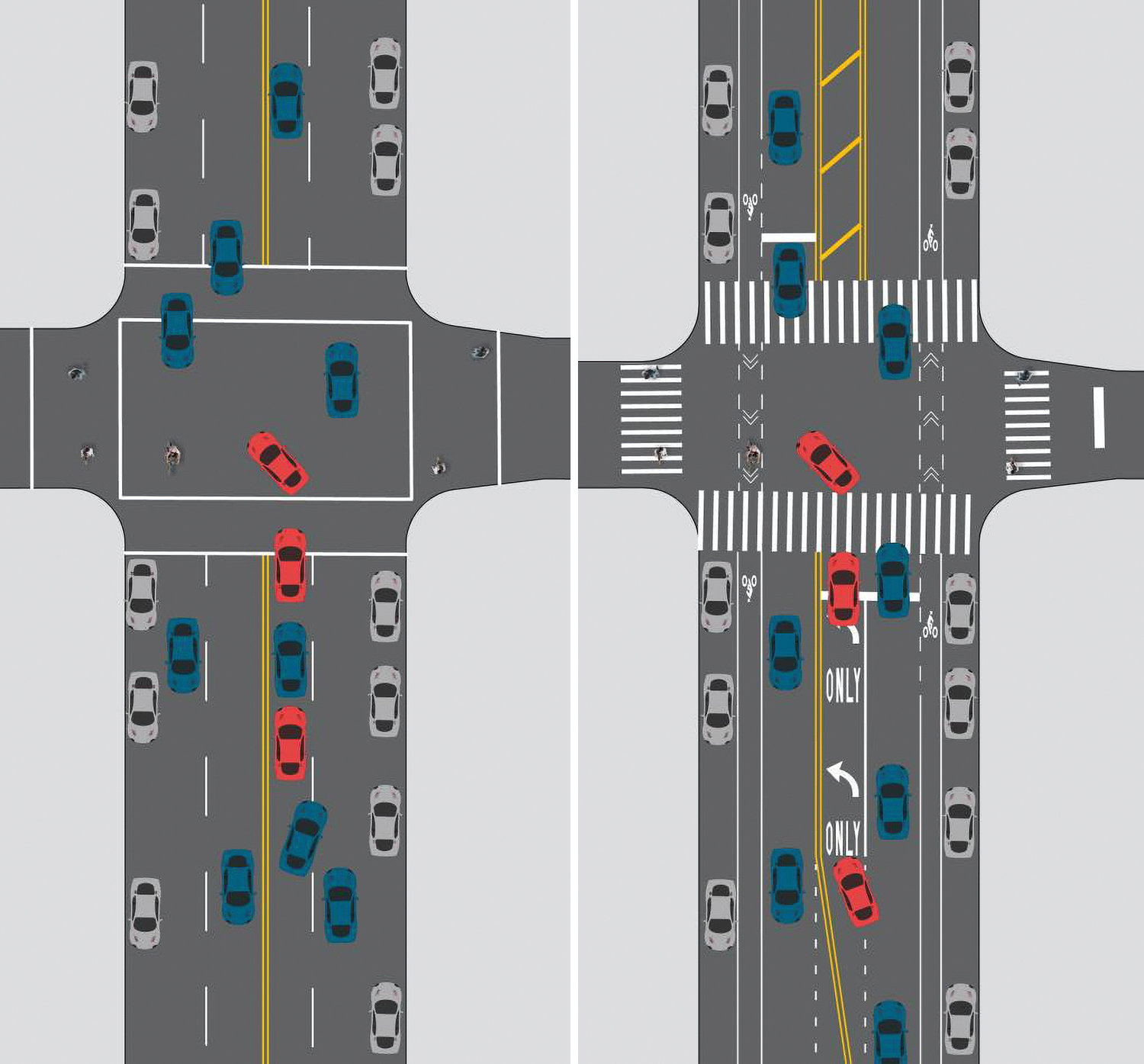 A diagram, left, shows the current status of Riverdale Avenue. There are two travel lanes in both directions, north and south, allowing drivers to make left-hand turns. The right diagram is the proposed plan for the narrowed roadway, planned for late summer or early fall. The city’s transportation department plans to narrow Riverdale Avenue from four travel lanes to three, while adding bicycle lanes on both sides despite opposition from Community Board 8.
Courtesy of NYC Department of Transportation
Previous Next
Want to join the discussion?

Community Board 8’s traffic and transportation committee meets with representatives from the city’s transportation department and officials from the Metropolitan Transportation Authority on Sept. 15 at 7 p.m. to talk more about plans to reduce lanes in North Riverdale.

To join the conversation on altering Riverdale Avenue, visit the CB8 website (tinyurl.com/BronxCB8) for more information.

Community Board 8 says no. Local officials say no. But the city’s transportation department remains a yes. And in the end, when it comes to narrowing Riverdale Avenue, it’s only their vote that counts.

DOT says it’s moving forward with a plan that will change how cars travel a stretch of the major North Riverdale thoroughfare between West 254th and West 263rd streets. And it could happen before the summer ends.

“This project will deliver designs that have proven to reduce speeding, calm traffic, and slow turning drivers on a street where there has been multiple fatalities in recent years,” DOT spokesman Vin Barone said. “We look forward to improving safety for all road users on Riverdale Avenue while creating an important new connection for the borough’s bike network.”

The plan is simple: Turn four traveling lanes into three. The middle lane will allow drivers to make left-hand turns only. At the same time, DOT will add bicycle lanes in both directions, next to the parallel-parked cars.

It’s a plan that has been in the works for at least the past couple years, but when news broke DOT was moving forward with the narrowing, at least one state lawmaker called it an ill-advised project.

“I don’t think DOT should do the road diet at all, frankly,” Assemblyman Jeffrey Dinowitz said. “As far as I know, they never observed traffic conditions during school arrival or dismissal hours.”

Nearly a hundred people voiced their own opinions during a CB8 traffic and transportation committee meeting last March, a mix of objections and support.

DOT isn’t beholden to the community board, itself purely an advisory body. Still, Dinowitz said, that doesn’t mean its members should be ignored.

“My job is to represent the views and interests of the people in our community, that’s who this ought to be about,” the Assemblyman said. “But instead, we have ideologues who are making decisions about our neighborhoods as if we have the same access to mass transit as they do in Lower Manhattan and western Brooklyn.”

The Assemblyman had his own plans for Riverdale Avenue. He fought for left-turn signals for northbound traffic on West 256th and West 259th streets.

“Those requests (fell) on deaf ears,” Dinowitz said in an Aug. 1 press release.

Even CB8’s chair, Laura Spalter, said she wanted to know how the DOT came up with their studies, which led them to make their road narrowing decision in the first place. She requested such data as what hour of the day they recorded problems on the road, or perhaps even the day it was done.

Yet, Spalter was left empty-handed until July. But when DOT did finally respond, it was not what she expected.

“I was very upset when I saw the study, because this was not a study,” she said.

Spalter shared four screenshots with The Riverdale Press she said demonstrate the current travel times, and the proposal for Riverdale Avenue.

“We had many questions that were not answered,” she said.

Also seemingly left in the dark was the Metropolitan Transportation Authority, which runs a shuttle along Riverdale Avenue to transport Metro-North Railroad riders. The MTA never even heard of the “road diet” project, Spalter said she was told through email.

“It is absolutely ridiculous that DOT didn’t even talk to the MTA before coming up with this road diet plan,” Dinowitz said.

“This is yet another example of DOT ideologues operating in silos trying to apply a one-size-fits-all plan to a community which just isn’t the same as what they are used to in other locations.”

But the MTA eventually did meet with city officials, approving the road plan. It was an agreement Spalter said she also was never looped in on. For her, it was yet another example of agencies ultimately ignoring the community board.

Other groups — like the Riverdale Main Streets Alliance — fears for the safety of anyone on or near the local streets. The group — led by Damian McShane — wants more than just a road repainting. In fact, the alliance commissioned a report in 2016 with a similar proposal in mind.

But narrowing Riverdale Avenue was only a small part of a bigger plan. The association aimed to repave the entire street and replace curbs.

“I think to some degree we’ve been painted as the drivers to this, but this road diet is not the end,” McShane said. “We see it as only the beginning of what needs to happen.”

But Dinowitz doesn’t believe DOT’s plan makes any safety improvements. In fact, the lawmaker says it could create even more danger for pedestrians and drivers alike.

And while there are indeed accidents and fatalities on this particular stretch, Riverdale Avenue is hardly alone, Dinowitz said. There are other streets in greater need of attention.

Since the proposal in March, five crashes have been reported along the 10-block radius, injuring three. But between 2019 and 2020, DOT reports 86 crashes on that part of Riverdale Avenue, injuring one cyclist, seven pedestrians and 14 motorists.

Two pedestrians and a motorist were killed.

CB8, however, has had its eye on West 238th Street and Bailey Avenue, where double-parkers, speedsters and pedestrians who chase after buses without looking for incoming traffic have been an issue. Like Riverdale Avenue, it’s not far from Yonkers, and has both the Bx10 and Bx3 lines traversing it.

However, Riverdale Avenue is a major artery with at least five bus routes — three of them express — and a Metro-North shuttle. Dinowitz insists there will be substantial traffic if the four lanes carrying all that within this corridor is reduced.

And as for bike lanes, would it even work if there is no bike network?

“But to be honest, I don’t think this is about creating a usable bike lane to help our community members get around more easily,” Dinowitz said. “I think this is more about making it harder for people in cars, and bike lanes are the DOT’s excuse.”