No surprise to some residents DOB is paying attention 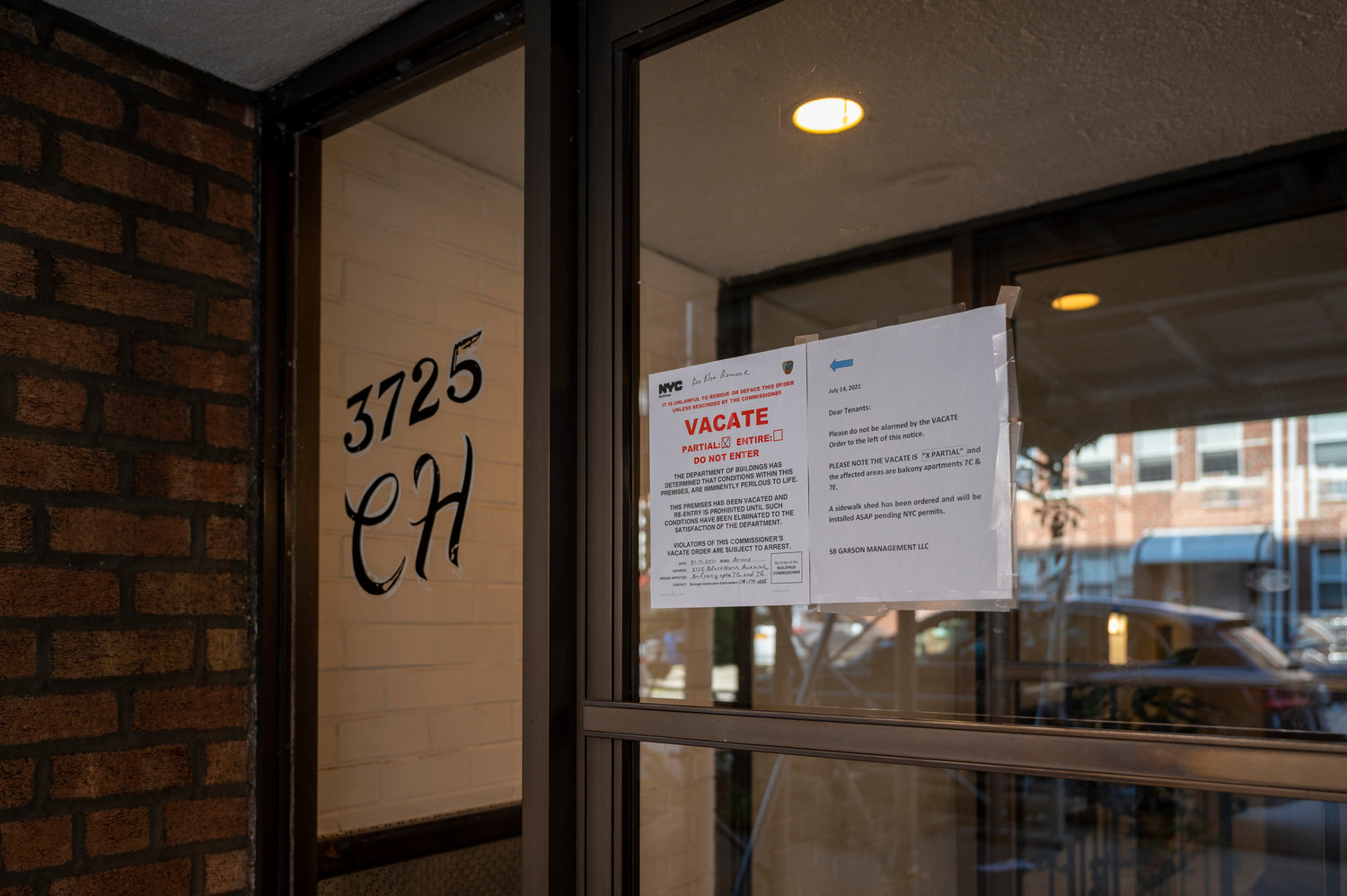 Residents from two seventh-floor units at 3725 Blackstone Ave., were told by city buildings officials to stay off their balconies out of fear they could be injured by falling bricks from the structure’s roofline façade.
HIRAM ALEJANDRO DURÁN 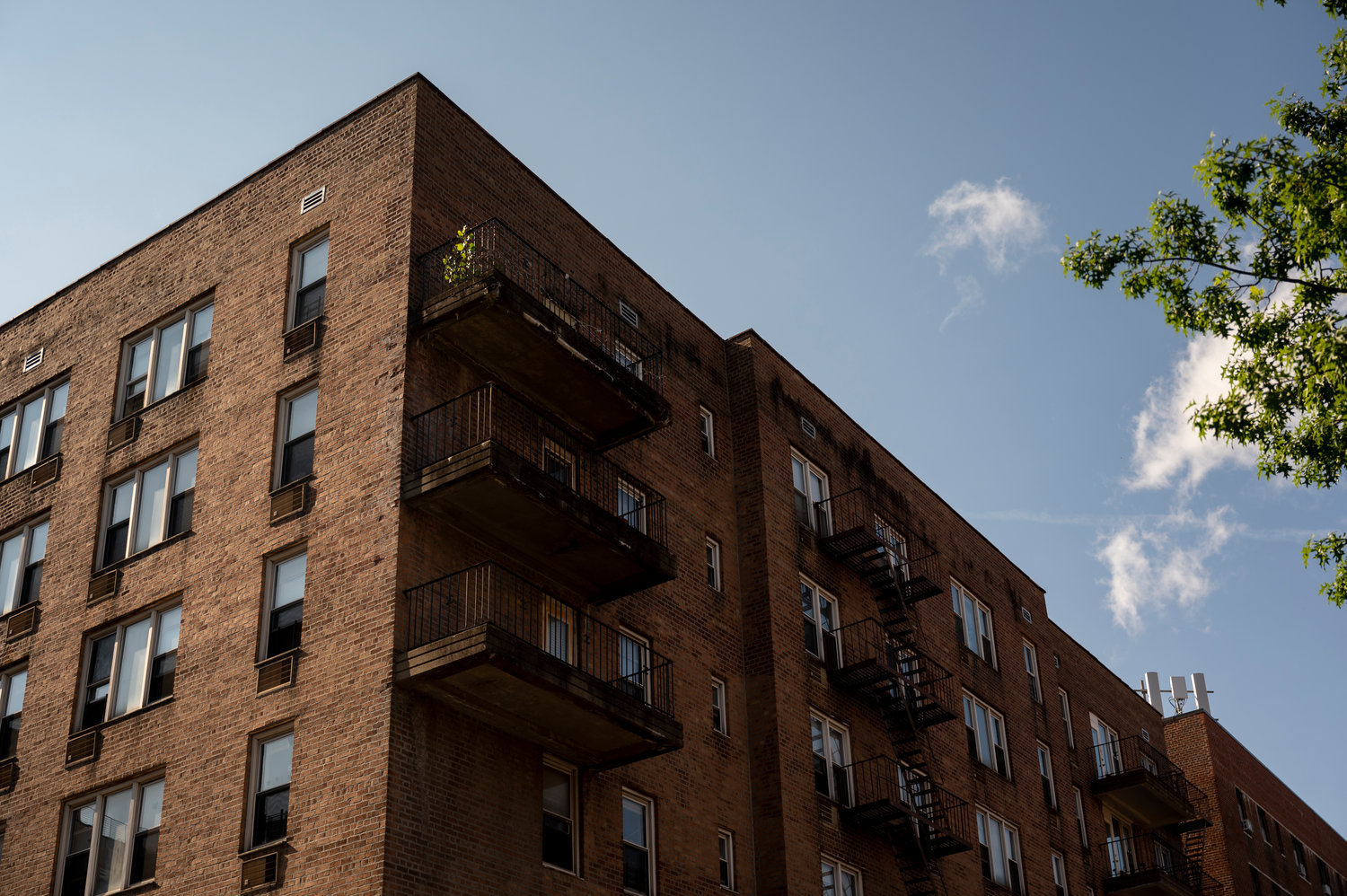 There have been a number of complaints filed against 3725 Blackstone Ave., over the years. But it was a crumbling façade along the roof line that forced city officials to tell two seventh-floor residents to stay off their balconies.
HIRAM ALEJANDRO DURÃN 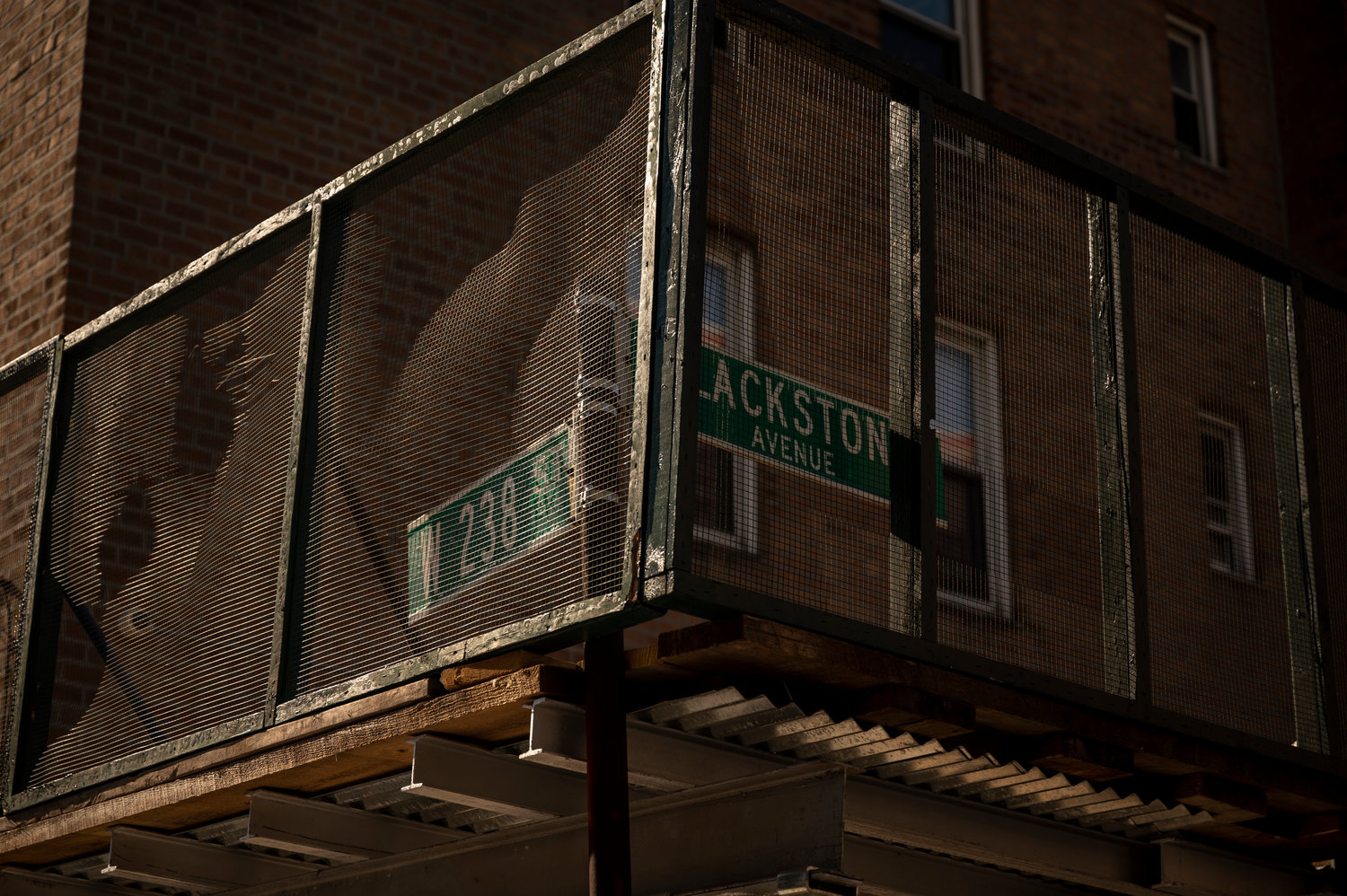 A sidewalk shed shrouds street signs at the intersection of West 238th Street and Blackstone Avenue where a building with a crumbling roofline façade has forced two top-floor residents to stay off their balconies.
HIRAM ALEJANDRO DURÃN
Previous Next
Support journalism

This week was a solemn one in the Surfside community just outside of Miami. Estelle Hedaya was the 98th and final victim of a condominium building collapse last month that still has building officials there puzzled on how it happened.

Seeing that devastation on television every day for the past six weeks can certainly take its toll. And it might even cause some hearts to race if they walk into their own building — even here, a thousand miles away — to find an evacuation order on their own door.

Closer inspection, however, revealed the evacuation was only for two units on the top floor. And even then, it was only for their balconies. Buildings department officials cited crumbling façade along the roofline of the apartment building, and feared some of those bricks could fall and hit someone enjoying the summer sunshine on their patio.

Disaster averted, but that hasn’t changed Daniel’s mind. He’s fed up with the building he lives in — and the management company that oversees it.

“They are probably the worst management group I’ve ever had to deal with, and I’ve been renting property for several years now,” said Daniel, who wouldn’t give his first name out of fear his landlord might retaliate. “Since the day I moved in this building, I’ve had problems with the management.”

After making numerous complaints — and speaking with neighbors about various problems in the building — Daniel says he’s not the least bit surprised about this latest incident at 3725 Blackstone.

“They don’t pay attention to these issues and problems, and then all the time they get worse,” he charged. “In the end, it turns out to be a violation. Sometimes a serious one like this one with health and safety hazards.”

The landlord at 3725 Blackstone, SB Garson Management, posted its own sign on the door next to the vacate order explaining it was only for two balconies on the top floor, and not for the whole building, and asking tenants to “not be alarmed.”

Garson has owned the 42-unit, seven-story building through its current limited liability corporation since 1996, according to city property records. But it appears some version of the management company has operated on the site at least since 1977, less than a decade after it was first constructed.

The Yonkers firm reportedly owns 11 commercial and real estate properties across New York City and Westchester County. They did not return a request for comment.

In 2014, Garson lost a $14.7 million lawsuit after a maintenance worker in one of its Manhattan locations severely injured his right hand in an accident, leaving most of his right arm deformed, according to published reports.

“For me, it could be a small problem and they’ll turn a blind eye all the time,” Daniel said. “It got to a point where I just gave up and I’m going to move out soon.”

And he’s positive others in the building share the same sentiment as he and his family.

“Some people like me want to move out but are stuck for whatever reason,” he said.

Daniel alleges he’s had to deal with rodent and insect infestation in the building in addition to loud noises coming from a neighbor’s apartment late nights. He says there have even been floods in the lower levels of the building.

After complaining to the management company about a noisy neighbor in confidence, Daniel says Garson outed him, escalating that conflict between the two even more.

“It has caused me and my wife so much distress, anxiety, and our health has deteriorated because we can hardly get any sleep,” Daniel said.

The buildings department visited 3725 Blackstone on July 14 after someone called in a 311 complaint, according to DOB spokesman Andrew Rudansky.  The claim was that “bricks were falling off the building.”

Garson was ultimately hit with two violations — each carrying a penalty of $1,250, and a demand the façade get repaired, and that a sidewalk shed is installed at ground level in the meantime. Garson installed the sidewalk shed within days.

Inspectors noted the parapet wall of the roof level had noticeable cracks. They also found the building’s chimney and two balconies on the building’s seventh floor were also starting to show serious signs of wear, Rudansky said.

The partial vacate order prevents the use of both balconies until repairs can be made.

Daniel wasn’t amused by the note the management company left next to the vacate order, saying it downplayed to seriousness of the violations.

“That’s what they do when there is a violation from the department of buildings,” he said. “They play it down like it’s not a big deal.”

The buildings, which sits between West 238th and West 239th streets, has been hit with similar structural violations in the past. The buildings department cited the landlord in 2014 for a crack on 3725 Blackstone’s exterior. It was part of some 40 complaints collected over years.

“In order to resolve the two violations, the owner must make repairs to the exterior of the building and remove the padlock from the fence leading to the fire escape,” Rudansky said, noting a separate violating claiming one of the fire escapes was blocked.

“If the property owners fail to resolve these violating conditions, they can be issued additional enforcement actions by the department.”