However, Jeffrey Dinowitz did spend a lot more money to keep his Assembly seat 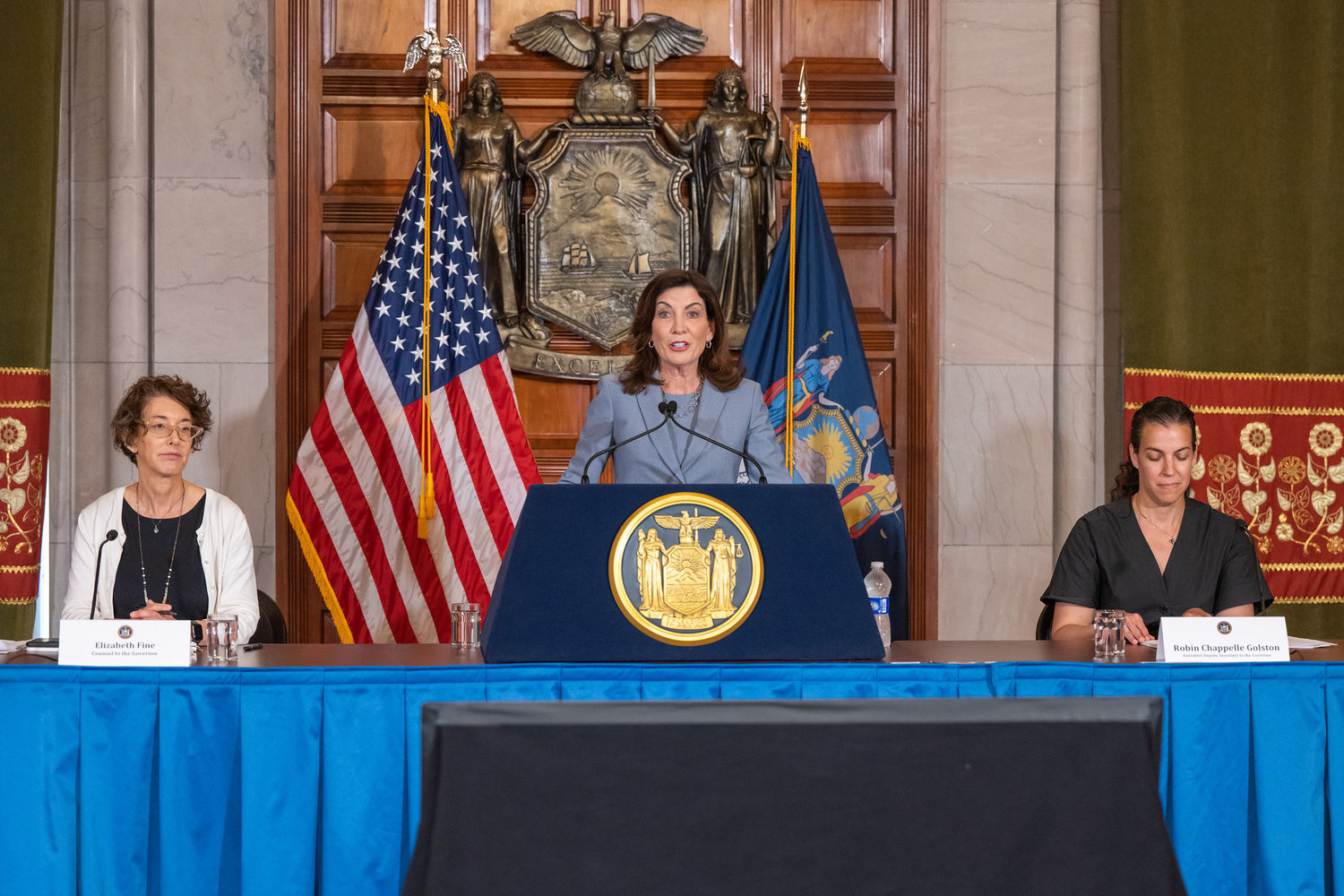 Gov. Kathy Hochul cruised to victory in last Tuesday’s Democratic primary where she managed to win every single county in the state.
Courtesy of Office of Governor Kathy Hochul/Darren McGee
Fast fact

Jeffrey Dinowitz’s campaign spent $177,878 this go-around versus Jessica Woolford compared to $64,852 in the last election versus George Diaz Jr.

With the Democratic nomination in her pocket, Hochul has now firmly secured her position as the frontrunner in this race.

In November, the governor will be facing off against Lee Zeldin, a current Long Island congressman who won the GOP ticket last Tuesday. Zeldin, who has been the party’s standard bearer since he announced his candidacy in April of last year, outperformed Andrew Giuliani, Rob Astorino and Harry Wilson to secure the nomination. Zeldin finished 20 points ahead of Giuliani, who came in second.

And while Giuliani was decisively defeated throughout most of the state, he did manage to get a plurality of votes in all of the city’s boroughs, save Manhattan.

The Democratic primary for lieutenant governor played out much the same as the governor’s race. Current Lt. Gov. Antonio Delgado, who is Hochul’s running mate, won the Democratic nomination with over 60 percent of the vote. Ana María Archila got a quarter of the votes, while former New York City Councilwoman Diana Reyna got 13 percent.

There was no Republican primary for lieutenant governor, as Alison Esposito is the only person running for the position.

This article was written as part of the 2022 NY State Elections Reporting Fellowship of the Center for Community Media at the Craig Newmark Graduate School of Journalism at CUNY.

In the 2020 Democratic primary, a little more than 16,000 people came out to vote for either George Diaz Jr. or Assemblyman Jeffrey Dinowitz in the 81st assembly district race. In last Tuesday’s primary, which was a showdown between Jessica Altagracia Woolford and Dinowitz, there were around 9,000 voters. That was about a 60 percent decrease in turnout.

That dip in voting could be seen at poll sites: As of 4:40 pm last Tuesday, only 240 people had checked into the Riverdale Y location, which served three election districts — a small fraction of the total voting population in the area.

A number of factors may have played into these low numbers. Unlike in 2020, this primary was not during a presidential election year where turnout usually swells. Also, thanks to the state’s chaotic redistricting process, there are now two primaries this election cycle — which no doubt added another layer of complexity to the voting process and possibly confused voter-fatigued New York residents.

Competitive races do usually bring out more voters, but that was not the case in this primary,  which ended up not being too competitive in the end.

Almost two out of every three votes went to Dinowitz. Woolford got only 37 percent of the vote — about the same cut as George Diaz got in his 2020 loss to Dinowitz.

Yet Woolford ran a much more committed and structured campaign than Diaz did. She received big-name endorsements, drew a sizable number of contributions, and had the backing of the Working Families Party, which has one of the largest grassroots mobilization operations in the state. Still, she got only 1 percent more of the vote than Diaz did.

One factor for that may be that Dinowitz’ team took Woolford seriously, pumping significantly more money into this primary than the one in 2020.  Dinowitz’ campaign spent $177,878 this go-around versus $64,852 in the last election.

And according to disclosure reports that go back to 1998, four out of the top five largest campaign expenditures came in this primary — including $74,358 for campaign mailings in the lead up to Election Day. In that single expense alone, Dinowitz spent more money fighting Woolford than he did Diaz.

The SuperPAC Common Sense New Yorkers also injected last-minute money into the race, sending out flyers calling Woolford a “dangerous, reckless socialist” who “pledge(s) to defund the police.” It should be noted that Woolford was not backed by the Democratic Socialists of America, unlike several other members of her slate.

That said, a WFP-aligned SuperPAC also sent out mailers on Woolford’s behalf, which Dinowitz said blamed him for the deaths at the Twin Parks fire months ago.

As for who won which neighborhood, a voter map from Atlasizer.com tells us a lot.

(The site compiled data from the planning department and the board of elections and does not yet include absentee votes.)  Dinowitz took just about every neighborhood in the 81st assembly district except for Kingsbridge — where Woolford still only had a slight edge.

Still, the blocks she won are some of the poorest in the district, where the median household income is around or under $40,000, like the Fort Independence Houses. That comes as no surprise as Woolford is from Kingsbridge and her campaign messaging was centered around uplifting underserved communities.

But the data shows that Woolford struggled to get her message out to every corner of the district. While walking in Kingsbridge, one would regularly see Woolford’s campaign posters taped up in shop windows. Outside of that neighborhood, less so.

While Dinowitz managed to hold onto his seat, the same cannot be said for his down-ballot slate members. If the election-night results stand, then three out of four of Dinowitz’ slate members — Sara Liss, Johanna Brujan Edmondson and Bill Weitz — will have lost their bids for the district leader and state committee positions. Only Michael Heller scored a victory in the male state committee race.

Dinowitz’ crew was largely defeated by an opposing slate, composed of candidates with some serious organizing bonafides, aiming to use the power of these positions to combat voter apathy in the district.

If this winning slate is serious about getting more residents out to the polls for the general election, then they definitely have their work cut out for them.