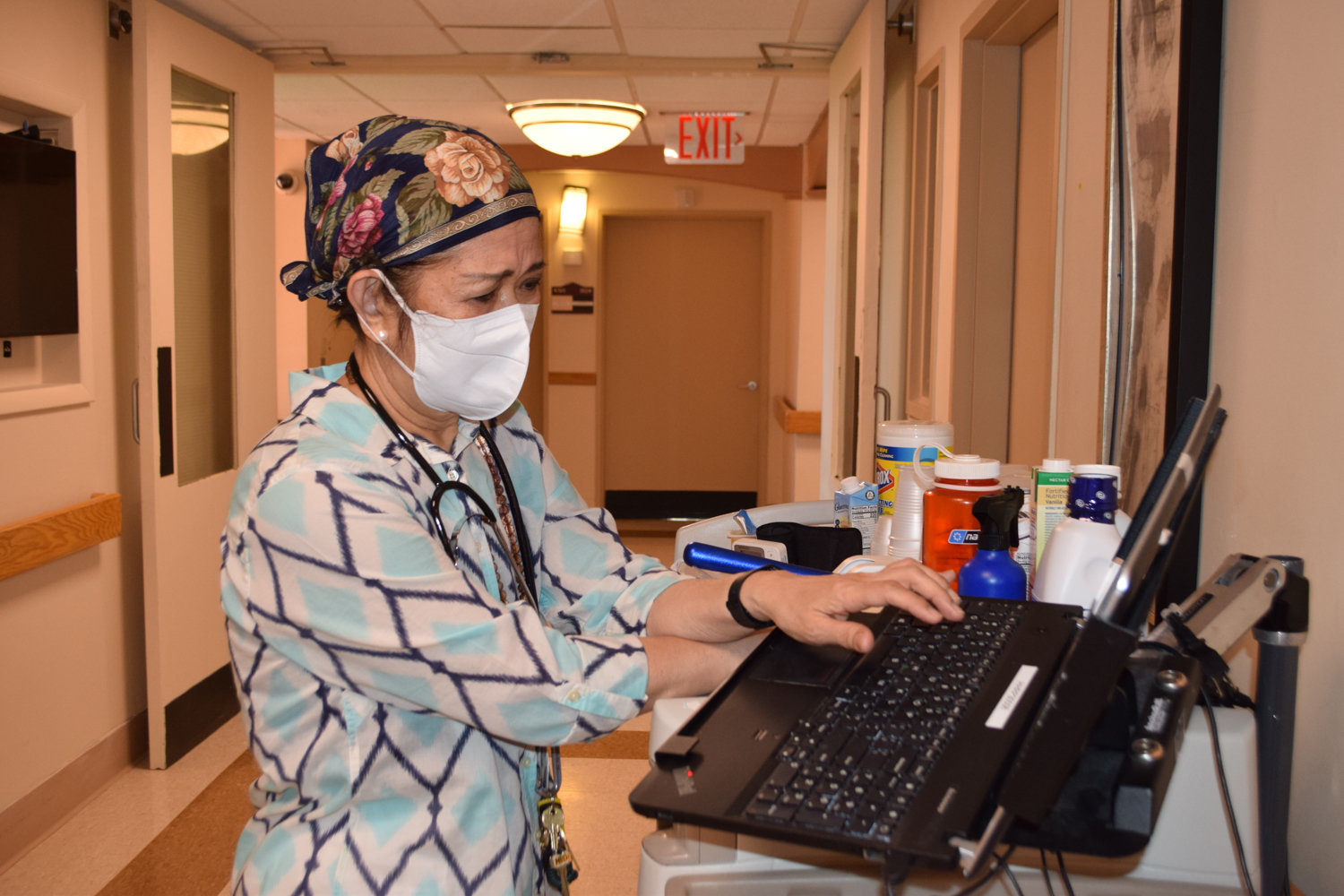 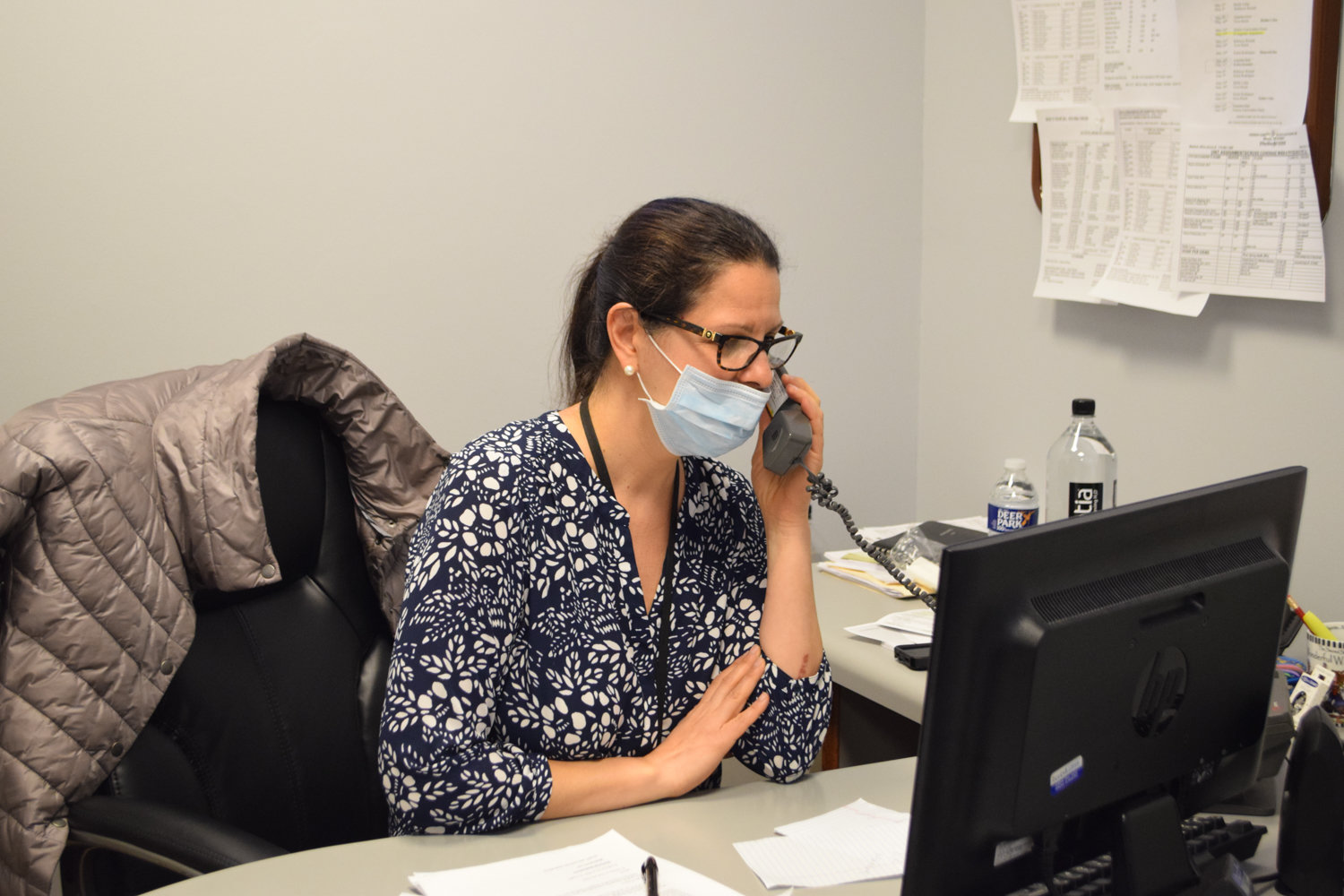 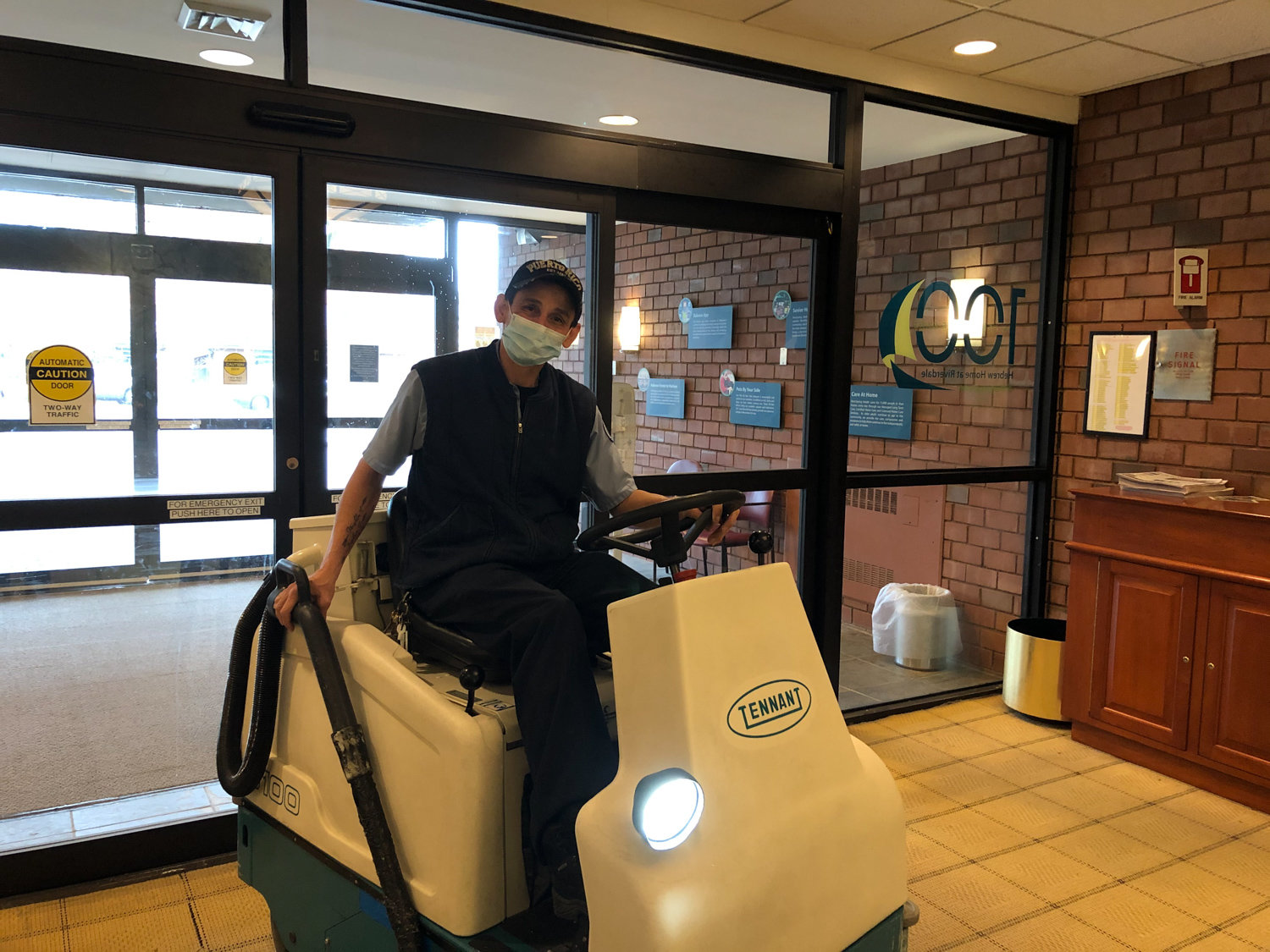 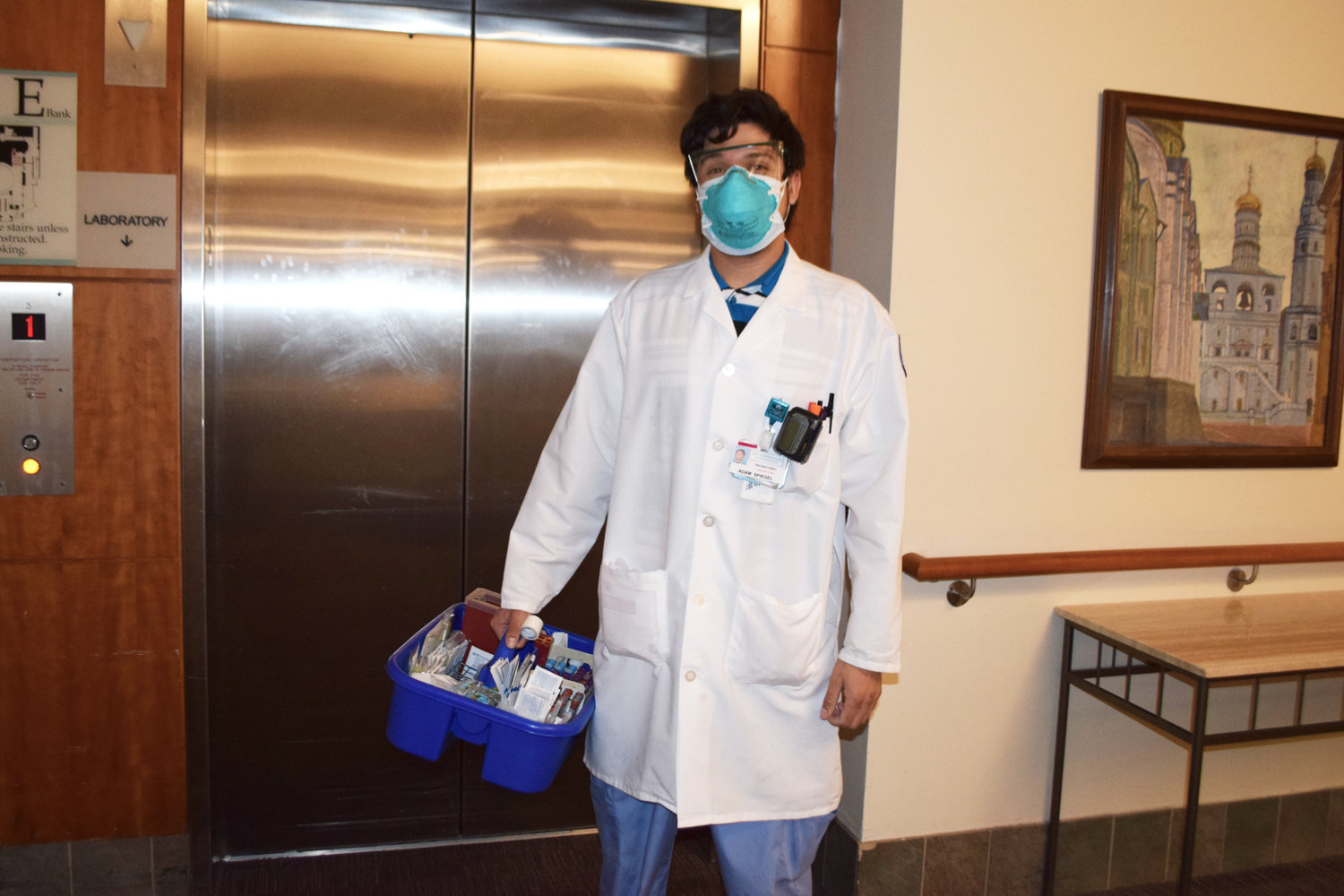 Officials at the Hebrew Home at Riverdale are denying a news report earlier this week claiming dozens more residents at the facility died from COVID-19 complications than what the nursing home has reported to the state.

“The suggestion that the other deaths at the facility were all COVID is baseless speculation,” the Hebrew Home said in a statement to The Riverdale Press. “COVID tests were not even available to the Hebrew Home or to other New York state nursing homes.”

What was true from the report is that the Hebrew Home had to build an additional morgue facility, chief executive Dan Reingold told The Press. But that’s because funeral homes were delayed as long as several days when it came time to pick up a body.

“The funeral homes were completely overwhelmed,” Reingold said. “The head of our maintenance department, who is just a wonderful, deeply committed, great guy, said ‘Hey, you know, I can build a morgue.’”

Faced with either overloading the home’s existing morgue — which had space for just six bodies — or renting a refrigerated truck like other nursing home facilities, Reingold decided the maintenance head could re-purpose the existing space to hold 14 additional bodies.

“He recognized that they had the plumbing and infrastructure to build a dignified place that we could keep people’s remains until such time that the funeral home could come,” Reingold said. “And that’s what we did, and I’m proud of it. It was an incredibly kind thing that he came up with.”

As of May 11, the home had reported 10 confirmed COVID deaths, and eight suspected to be from the coronavirus. More than a dozen other residents believed to have contracted the virus since March died in hospitals. Those numbers aren’t included in the state’s public tally.

“We categorically deny that there was anything done here to cover up anything,” Reingold said. “We have a full-time professional medical staff here … and we rely on their medical judgement and their medical decision making — including the cause of death. And there is no interference, or pressure, or conversation with them about that.”

All of that has come with “no guidance” from the federal or local government.

Gov. Andrew Cuomo this past weekend walked back a previous directive that allowed hospitals to discharge patients back into nursing homes, even if they were still sick. Under a revised executive order, hospitals can’t return patients to a facility like Hebrew Home until they no longer test positive for the virus that causes COVID-19.

“We’re proud of the things we’ve done in reaction to this,” Reingold said. “We stand by our commitment to transparency.”

As the coronavirus pandemic continues to play out, the nation has heard horror stories from doctors and nurses in hospitals struggling with high numbers of patients, sick staff members, and an inadequate supply of gowns and masks to keep everyone on the front lines safe.

But another kind of medical facility is entering the public eye — nursing homes — and some observers say it should have been front-and-center from the beginning. More than 5,400 people have reportedly died in nursing homes from confirmed or suspected complications related to COVID-19, and the state is now providing facility-by-facility data on a daily basis.

The confirmed number of COVID-related deaths in nursing homes is a little more than 10 percent of the state’s overall death toll, Gov. Andrew Cuomo shared during his daily coronavirus briefing on Sunday. Compared to other states — like West Virginia and Minnesota where 8-of-10 deaths are in nursing homes — New York has kept those numbers down, Cuomo said.

Yet, that doesn’t include suspected cases that attracted widespread attention, especially on May 6, when the state added 1,700 presumed deaths to a tally already in the thousands. Presumed deaths include those that could be reasonably attributed to COVID-19, even if the person was not tested before or after they died. Those numbers only include deaths that occurred within the facilities, not residents who were moved to hospitals and later succumbed there.

In the northwest Bronx, as of May 10, Schervier Rehabilitation and Nursing Center on Independence Avenue had four confirmed COVID-positive deaths and another 36 suspected. St. Patrick’s Home on the southern edge of Van Cortlandt Park had 23 confirmed deaths, and 14 suspected.

Those numbers drew immediate criticism — both on how the nursing homes operated, and a now-rescinded state policy releasing hospital patients back into nursing homes, even if they were still testing positive for the coronavirus. But nursing home workers and administrators say it’s just impossible to keep up with the demands of the pandemic as the virus invades their facilities.

“From the beginning of March through the middle of April, the nursing home industry was pure hell,” Adam Geller, the administrator on at Park Gardens Rehabilitation and Nursing Center, wrote in a Point of View piece last week in The Riverdale Press. “One way or another, COVID-19 made its way into many — if not all — of the nursing homes in New York City.”

Park Gardens, on Broadway, had four confirmed deaths and two suspected as of May 10.

The coronavirus arrived in North Riverdale at the beginning of March when both SAR High School and SAR Academy closed down after a student’s father tested positive for SARS-CoV-2, the virus that causes COVID-19. The student, her older brother, and her mother all later tested positive, but fully recovered.

Days later, the Hebrew Home at Riverdale — just blocks from the school’s campuses — closed to visitors in an attempt to prevent the virus from spreading through the state’s largest nursing home.

“It became pretty clear to us that people from the outside coming in would pose a threat, because of lack of testing and so on and so forth,” said David Pomeranz, the Hebrew Home’s chief operating officer. “We were pretty conservative about it, and pretty early on decided that stopping visitation would make a lot of sense.”

The home also started taking the temperatures of all staff members, as well as everyone who stepped foot on campus, including delivery drivers or those making maintenance calls.

“However, that only does so much, because sometimes people are asymptomatic, they don’t have fevers, and they can be carrying the virus,” Pomeranz said.

As more tests became available — evolving into rapid-testing kits that could provide results within minutes instead of  days — Pomeranz was hopeful that Hebrew Home would be able to use those tools as a way to open its doors for some visitors on campus, while testing more staff members and residents.

“We’ve always had the proper PPE for our staff,” Pomeranz said of personal protective equipment, like gloves, face masks and gowns. “That’s not been something that we’ve been without. We have a very aggressive purchasing leadership. We worked closely with New York-Presbyterian and created COVID recovery floors, and they helped us with PPE when we did that.”

Even so, he said, staff members were often changing their masks, gloves and gowns multiple times a day as they cared for patients, and the stock of those supplies diminished quickly.

“You really don’t ever feel like you have enough,” Pomeranz said.

Something the virus doesn’t do as it infects nursing homes is discriminate, said Kelly Barrett Sarama, a supervising attorney at the Center for Elder Law and Justice in Buffalo. Homes with five-star ratings — calculated by the Center for Medicare & Medicaid Services — were just as susceptible to high rates of infection and deaths as low-rated centers.

Nursing homes are often understaffed, Sarama said, which often leads to poorer quality care. Staffing rates took an even bigger hit early on in the pandemic as nurses and aides called in sick, or even tested positive for the coronavirus, forcing them to take time off.

“There is definitely a recipe for disaster here,” Sarama said. “I don’t think it was necessarily possible for all nursing homes to be prepared. Given the whole system, given the lack of PPE that’s available, given the lack of emergency protocols and procedures that were clearly not in place — unfortunately, it seemed to be a system of triage in managing this crisis instead of a system of preparedness to manage crises.”

As of May 8, the Hebrew Home had recorded 25 deaths, said spokeswoman Wendy Steinberg. That’s more than the seven confirmed and seven suspected COVID-related deaths reported through the state health department at the time, because it also includes 11 residents who died in the hospital after testing positive. Health department reports only include those who died at the nursing homes themselves.

As of May 10, the Hebrew Home had 10 confirmed deaths on campus, and eight more believed to be related to the coronavirus.

Current social distancing laws make it impossible to conduct most traditional funerals and mourning ceremonies, Pomeranz said, so families are unable to grieve for their lost loved ones as they may like to.

Hebrew Home staff members have improvised, in what Pomeranz describes as a “moment of pause, a sacred pause.”

“We go to where the body was when someone had died, or if they had been transported to the morgue, and we talk about that resident,” he said. “We involve staff who knew them. We have our own sort of mini-prayer service for them, so we’re kind of standing in for the families.”

While thinking about reopening was hopeful, the Hebrew Home is not planning on opening for visitors and normal business any time soon, Pomeranz said.

Some scientists have warned about a second wave of infections in the fall, and Sarama said all nursing homes should “zoom out” to see which of their practices worked to reduce infections, and which didn’t.

“I would say, I guess, the best thing for facilities to be doing is operating like everyone who is in and out of the facility has COVID-19,” Sarama said. “Yes, absolutely, taking temperatures, and monitoring, and making sure all kinds of safety precautions are in place.”

CORRECTION: David Pomeranz is the chief operating officer for the Hebrew Home at Riverdale. A story in the May 14 edition misspelled his name.