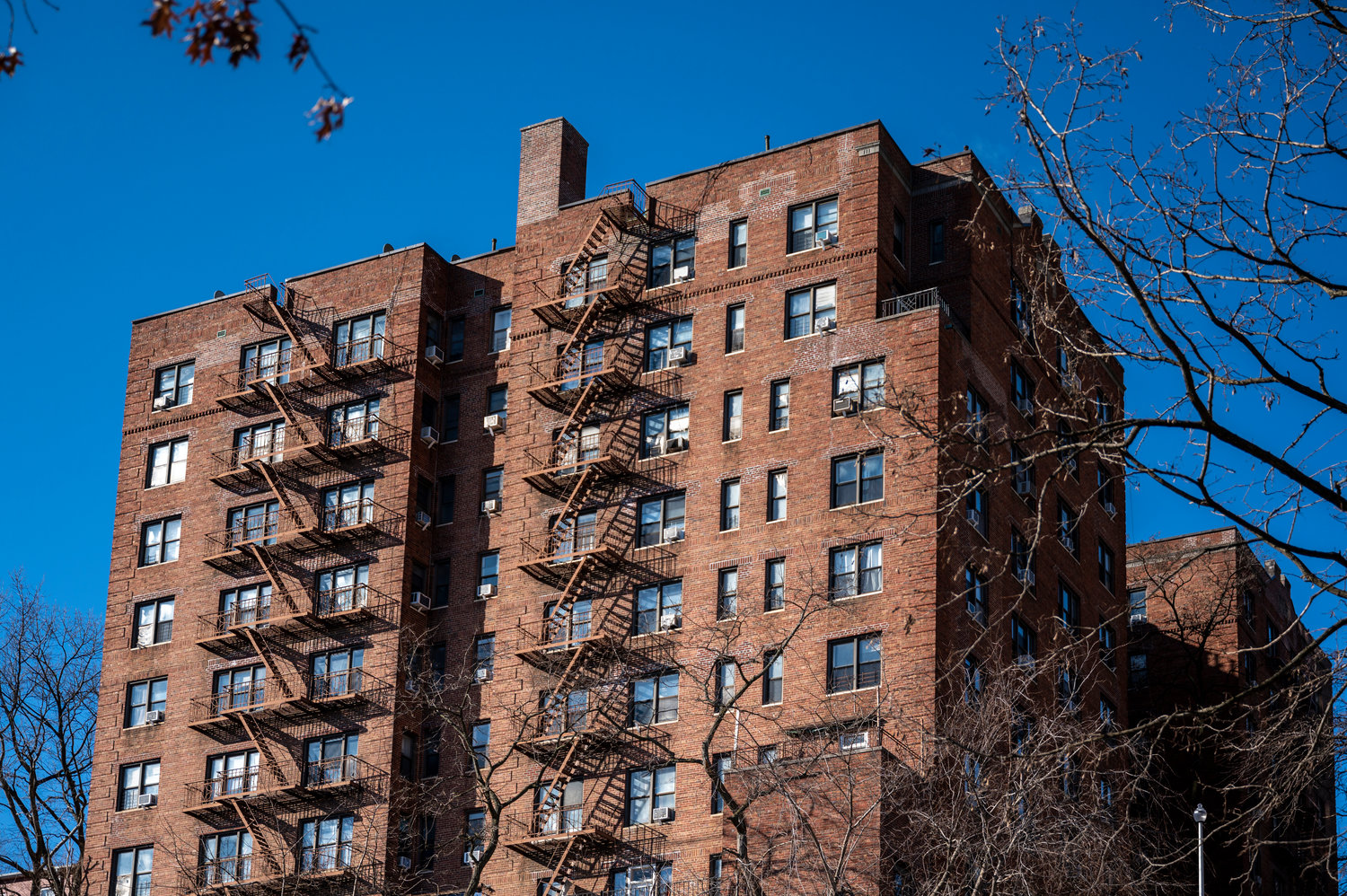 There may be a lot of interruptions physically coming to campus in the wake of the coronavirus pandemic, but one thing still remains true since the beginning of the academic year at Manhattan College: The ‘good neighbor’ policy is still in effect. That means zero-tolerance for large gatherings among students, according to the dean who put it together. But residents of 3660 Waldo Ave., say some students living there continually violate the policy.
HIRAM ALEJANDRO DURÁN 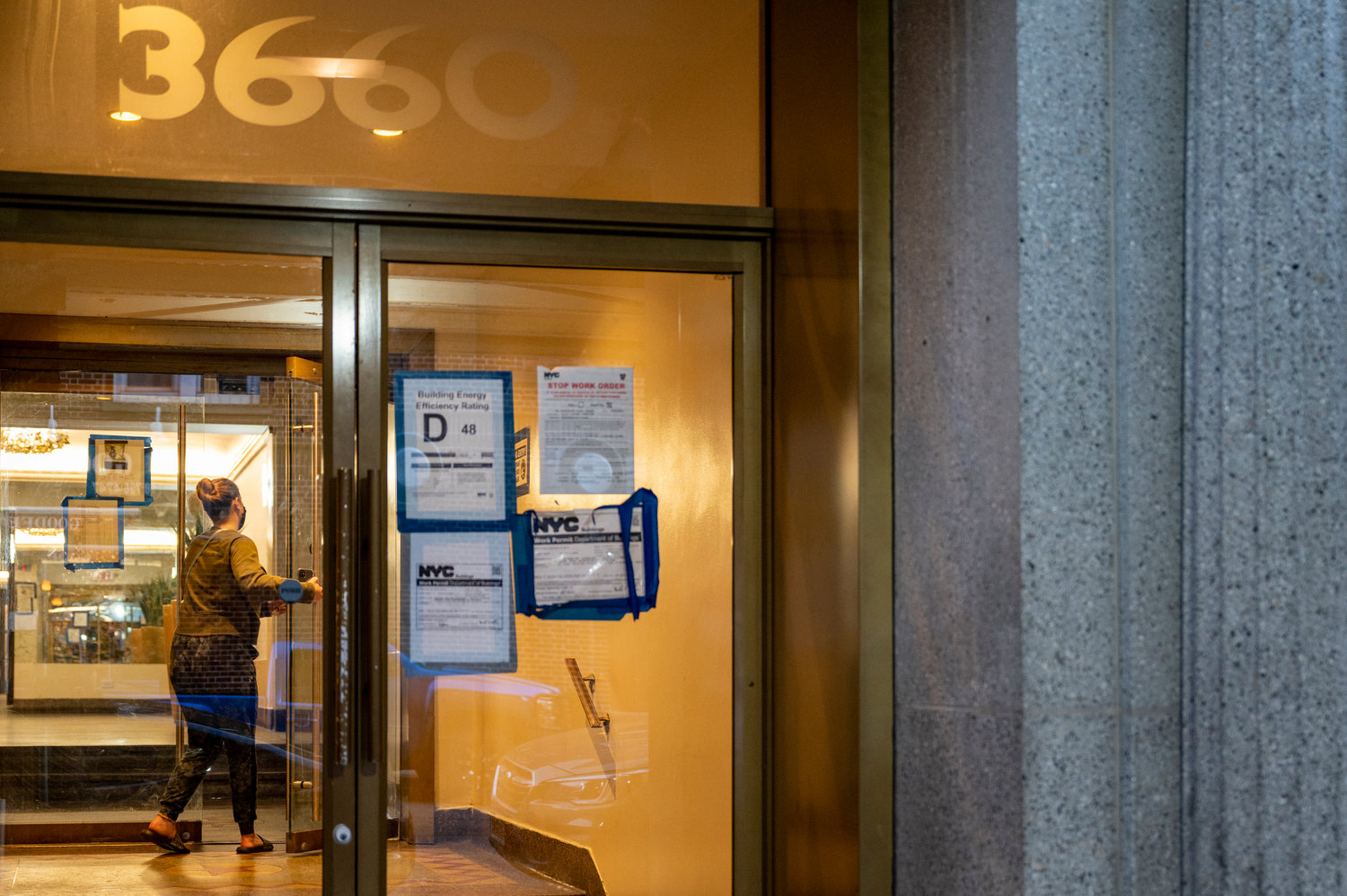 The Majestic at 3660 Waldo Ave., is a popular building for Manhattan College students to live in off-campus. But some neighbors believe at least a few of the student apartments are posing a danger to others from partying and other unsafe practices.
HIRAM ALEJANDRO DURÁN 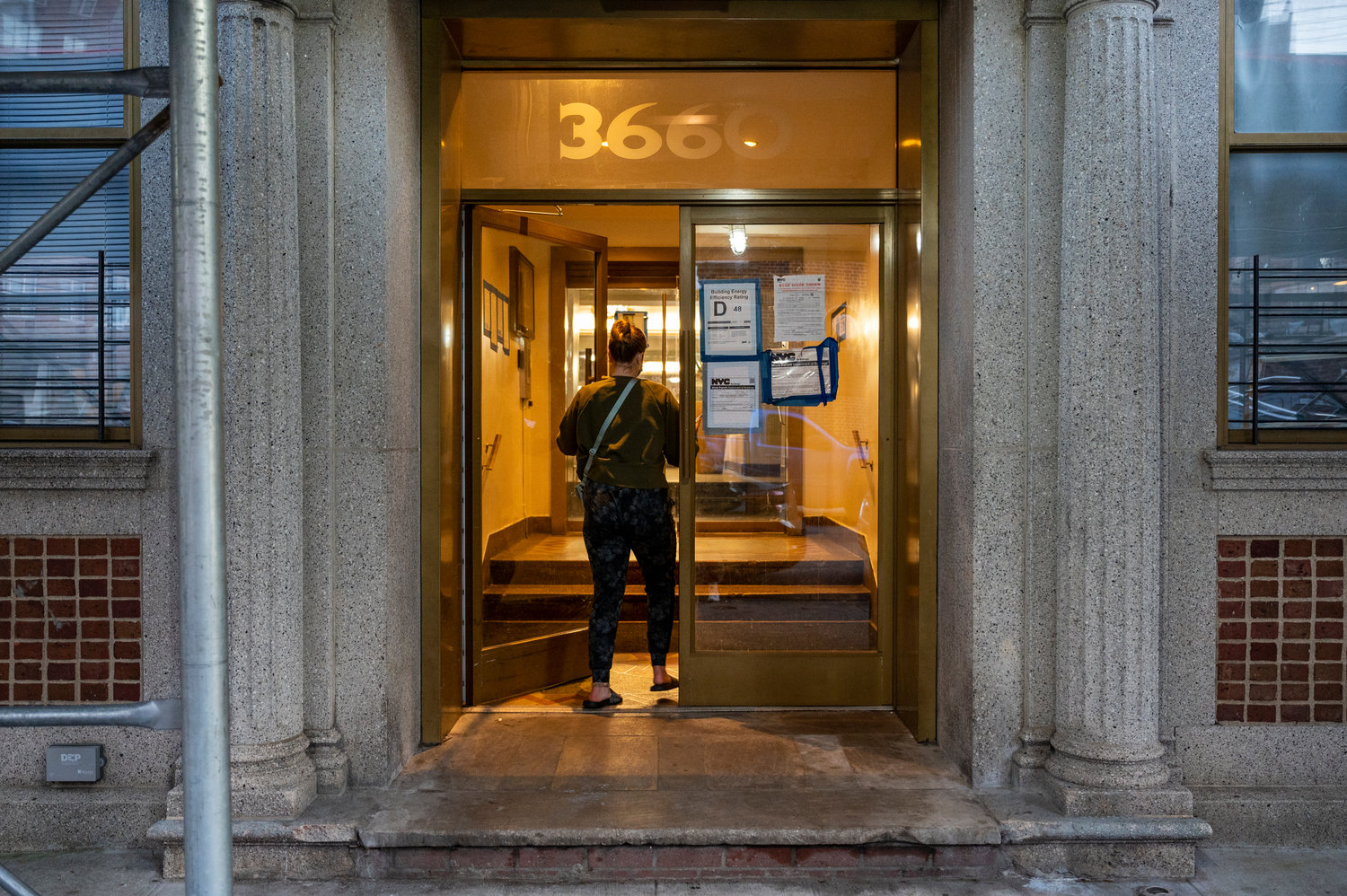 Partying is usually expected in buildings where college students live, like at 3660 Waldo Ave. But during the coronavirus pandemic, concerns are less about noise and more about the danger partying could pose to neighbors concerned about the spread of the coronavirus.
HIRAM ALEJANDRO DURÁN 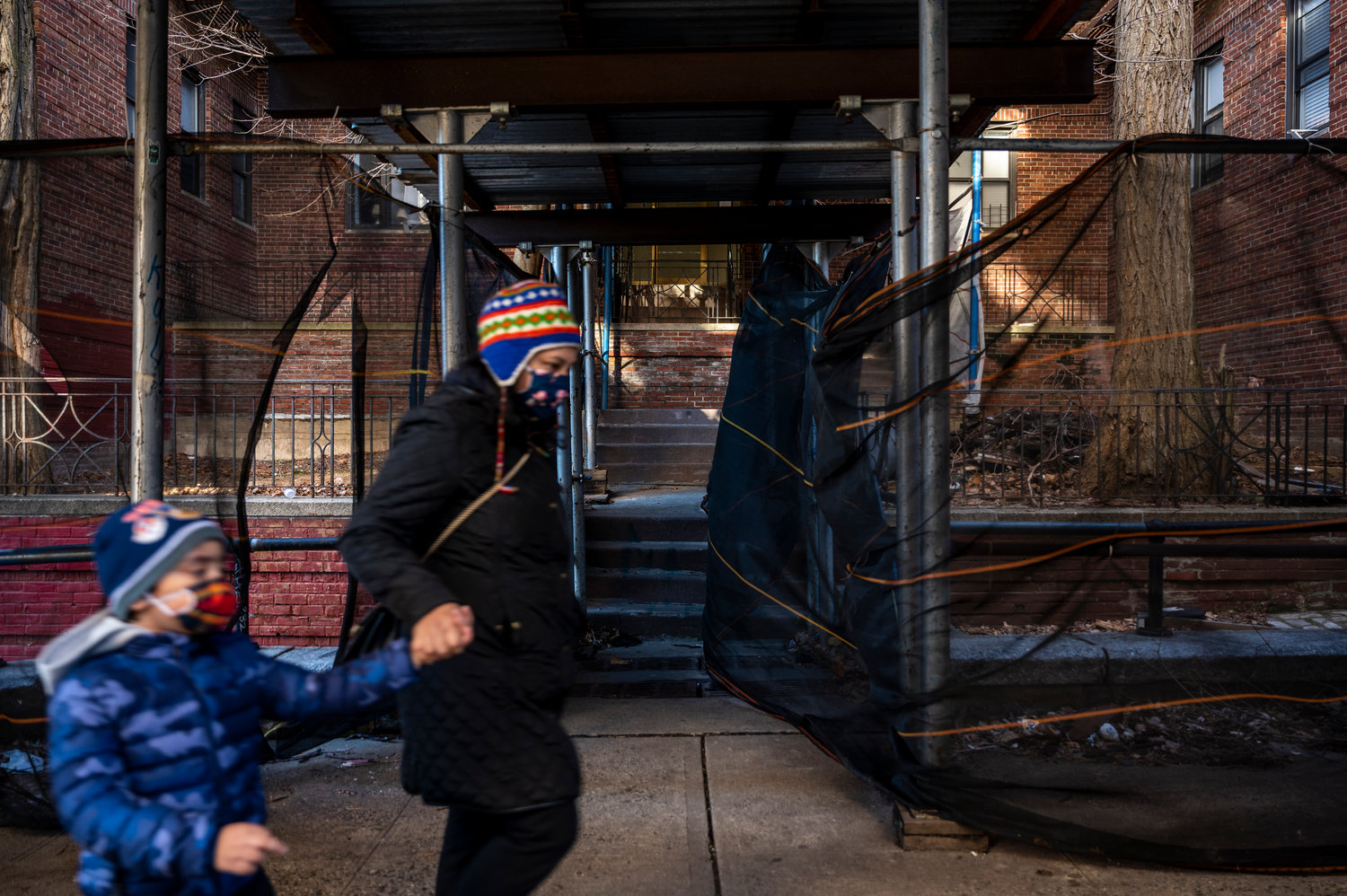 The step street beside 3660 Waldo Ave., is a well-known nuisance in the neighborhood. But the building’s residents have another potential problem much closer to home — and much more dangerous: college students partying during a public health crisis.
HIRAM ALEJANDRO DURÁN 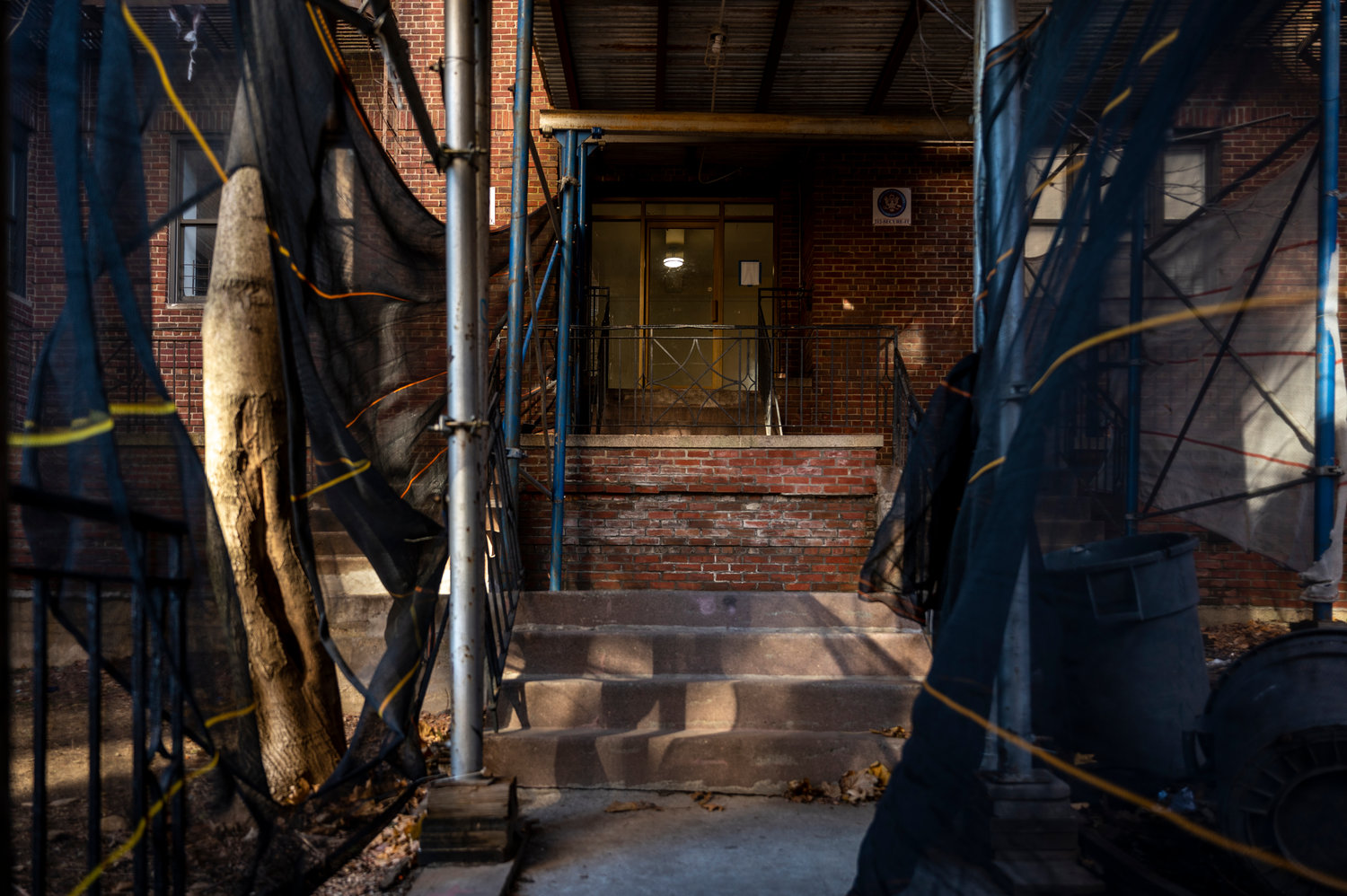 For once, residents of 3660 Waldo Ave., aren’t complaining about the noise of college students partying in the building. Rather, they’re concerned about the danger those large gatherings could pose for neighbors in the wake of the coronavirus pandemic.
HIRAM ALEJANDRO DURÁN
Previous Next
By ROSE BRENNAN

‘Twas a few nights after Christmas and all through the house, a party lasted for hours, awakening even the smallest mouse.

That was the case one evening in The Majestic. The building at 3660 Waldo Ave., is popular with Manhattan College students wanting to live off campus. And according to some of their immediate neighbors inside the building, some student apartments are infamous for causing a racket at all hours of the night.

This is no surprise for The Majestic — a party from time to time is part and parcel for college students. But in the coronavirus pandemic era, parties aren’t just disruptive to the non-college population of the building: They can be dangerous.

One party was especially egregious the evening of Dec. 27, according to Majestic resident Miriam Bendayan. It started around 7 in the evening, but didn’t end until 2:30 the next morning — after she called police.

While the noise was certainly a contributing factor in why Bendayan rang the 50th Precinct in the first place, it actually wasn’t exactly her main concern. Instead, she was more worried about a large group of people gathering without masks in a small, enclosed space like an apartment for several hours — which could be the perfect super-spreader event for an unwelcome guest: the virus that causes COVID-19.

“They stuck together for seven hours,” Bendayan said. “I’m not calling about the noise. We’re used to that.”

Worried about the danger from her neighbors not wearing masks, Bendayan reached out to those who run The Majestic, simply asking for a sign reminding people to wear masks when not in their own apartments. But those efforts were fruitless.

“Management never put up signs,” Bendayan said. “Every building that I know (where my friends live), there was a sign about masks and distance in the elevator. Our building (and) the management, they don’t give a damn.”

But Bendayan isn’t alone in her concerns about safety in the building — especially when it comes to the college students who live there. Kathleen Mannion has chronic obstructive pulmonary disease, which puts her at high risk for a virus that attacks the respiratory system. And she worries buildings like The Majestic could be next in a troubling trend she’s seen in the news.

Before the academic year began, Manhattan’s dean of students, Esmilda Abreu-Hornbostel, authored an open letter to the community in The Riverdale Press, informing them of the college’s “good neighbor” policy. Repeat offenders of off-campus partying could be labeled “nuisance residences,” she said, meaning students could be barred from living there in the future.

“We will have zero tolerance for large gatherings, on or off campus,” Abreu-Hornbostel wrote at the time. “Students who are facilitating events that could spread the virus, and students engaging in behaviors that intentionally put others at risk, will be subject to appropriate discipline.”

However, according to Bendayan and Mannion, the student behavior at The Majestic continually violates the policy. Fed up with the partying and the potential danger it posed, Bendayan called the college’s public safety department. However, she wasn’t exactly reassured by their response.

The officer she called said they “are not responsible for the students off-campus,” Bendayan said. “They pay rent in the building, and they’re not the ones that should be called.”

Mannion called both the college and 311. Both of her efforts were in vain as the college reportedly told her to talk to her landlord, while 311 offered very little other help.

“It’s very frustrating,” Mannion said. “And I’m really afraid. I have COPD. I have a lot of issues. We can’t be treated this way.”

According to Abreu-Hornbostel, public safety can’t go onto private property like The Majestic and take a report because they don’t have jurisdiction off-campus, unless the building is college-subsidized like Overlook Manor — which, coincidentally, is right across the street.

But if the college’s public safety unit can’t interfere in complaints about off-campus partying and other potential violations of the school’s “good neighbor” policy, who can? Abreu-Hornbostel urged neighbors to call 311 or the 50th Precinct. Once those complaints are registered, both will confer with the college so it can investigate further.

And even if the college’s public safety officers don’t have off-campus jurisdiction, they can still assist in identifying potential nuisance apartments and discipline students who violate the policy.

Public safety officers “can take the report and they can work with the precinct, triangulate those 311 calls,” Abreu-Hornbostel said. “If the neighbor gives us good information, we can find out if they are indeed our students.”

Once students are positively identified, the college can take disciplinary action ranging from written warnings to suspension or even expulsion.

But Abreu-Hornbostel doesn’t want the focus to be punitive. She’s more committed to ensuring any students who live off-campus are good neighbors, especially in the midst of a public health crisis.

And her devotion to the well-being of the community goes beyond that: Abreu-Hornbostel actually lived here as a child, and wants to ensure her students have a part in making the community welcoming and safe for all who live there.

“When I first came from the Dominican Republic to the United States, I landed in Riverdale,” she said. “That’s where I first saw snow. That’s where I first fell in love with the little black squirrels. And so, for me, I have a particular interest in making sure that everybody feels safe and happy in the area.”