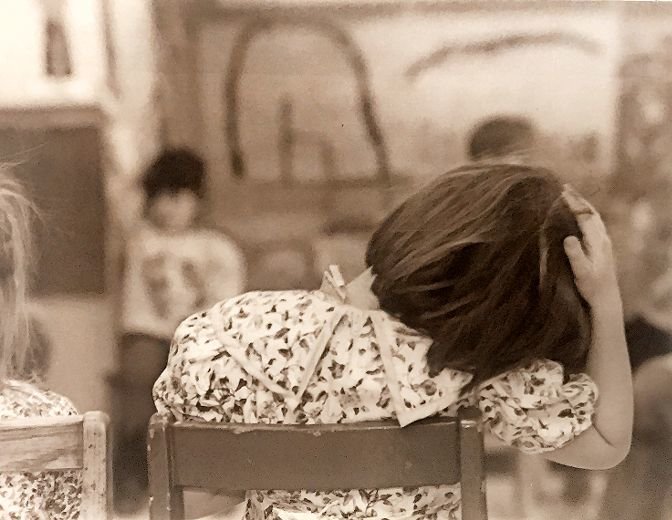 Samantha Lewin, 5, holds her head as her Kinneret Day School kindergarten class relives the Oklahoma City bombing tragedy in a story that published on May 4, 1995.
GEORGE M. GUTIERREZ / File
By ELIZABETH TROSTLER

EDITOR'S NOTE: This story was originally published on May 4, 1995, and was reprinted as part of the 70th anniversary of The Riverdale Press.

Five-year-old Rachel Deadman could not bring herself to draw a picture of a scene after the bombing in Oklahoma City. Instead, she chose the moment just before it happened.

“The bomb didn’t blow up the building yet. The timer is running,” said the kindergartner at Kinneret Day School as she pointed to her crayon drawing of a colorful office building, still intact, with a car parked just out front.

But it did happen. On April 19, a car bomb devastated the Alfred P. Murrah Building, killing more than 100 people — some of them children who attended the day care center on the second floor.

People who knew the routine of that day care center thought the children would have just been sitting down to their morning meeting at the time the bomb went off, talking about the weather or singing songs.

At their own morning meeting, the students in Dorit Niven’s kindergarten class at Kinneret brought up the subject of the bombing. Many had heard about it on television, and some brought in newspaper clippings. Ms. Niven allowed them to talk, and even encouraged them to express their thoughts and fears.

“The building blew up by a bomb,” said Gideon Goren in answer to the question of what exactly happened. “And then the kids died,” he added.

“Many people died,” someone else said.

“And babies,” echoed a small voice.

“How did that make you feel?” Ms. Niven asked.

“Were you scared?” she asked.

“Yes,” they answered in unison.

“And now they are searching for the crook,” Gideon said. “They found only one. They need to find another one.”

“What do you think should happen to a person like that?” Ms. Niven asked.

“He should be killed,” said Tslil Landau, 5.

“He should be put in jail for the rest of his life,” said Gideon.

“He should stay in jail,” said Howie Wilamowski, 5. “He might trick us and say he learned his lesson, and then blow up another building.”

The children also talked about comforting the families. They talked about the help people gave each other by giving food and love, and by helping them begin to rebuild their lives. Ms. Niven said she stressed the idea that both neighbors and strangers helped the victims.

“I believe that whatever is brought up in school should be discussed to the best extent the children can understand,” said Ms. Niven in her quiet classroom, just after her students were taken outside to play, while the class pet Brownie — a light brown rabbit — hopped happily around the room.

Ms. Niven said the conversation sometimes touches on such topics as sex, drugs, and even AIDS. She said she never pushes the children to speak, and if the conversation gets too specific, she will listen, and then guide it to an easier topic. But she never ignores their needs or questions.

One year, Ms. Niven spent a lot of time talking with her students about the Gulf War, which she said led to an exciting lesson about flags.

And this month, the class has discussed the Holocaust, something she has done for the past 28 years she has taught at the school. That is also a difficult, emotional topic, but one she said the children sometimes need to talk about.

In addition to talking about what happened in Oklahoma City, the students drew pictures. Ms. Niven told them to draw anything they liked that had to do with the bombing.

Daniel Rovenpor, 5, drew a picture of the explosion itself. He used red and black crayons to depict a chaotic situation. And just behind the flurry of lines, he drew two people standing very still.

“I drew the building, and the people in the building dying, and all the blood,” said the little boy.

Five-year-old Samantha Lewin drew a picture of two people digging a grave for a young child. The two figures stood with shovels in the dirt, and a small, pink baby lay between them, waiting to be buried.

Sharyn Ioffe, 5, drew a picture of a young woman dressed in purple with flowing blonde  hair and a purple bow, standing alone. Greenish-blue tears dripped steadily from her eyes down to her feet.

“The mommy is crying because the babies died of an explosion,” Sharyn explained.

Ms. Niven said that most of the children were able to talk about the bombing without becoming visibly upset, but one student broke down after the discussion. He asked her if something like that could happen here.

“He was the only one who really took it a step further to make it relevant to us. If it happens there, why can’t it happen here? And unfortunately, we don’t have the answers,” she said. “It is a real fear we all have.”

Asher Abramovitz, the school’s principal, said he thinks the encouragement to express fears will help the students deal with difficult times when they become adults.

“Our approach to the school is not to close anybody’s eyes or hide anything,” he said. “If a kindergartner mentions anything in the class, we expand on it. We talk it out — through drawing, poetry, any way a child can express it — and it brings better understanding and much relief.”

Howie wants to make sure that the criminal won’t be able to strike again, so he drew a picture of the bomber being shot.

“The guy is getting shot because he did a bad thing,” said the 5-year-old, referring to his picture that hung on a bulletin board in the hallway. “He should get shot so he won’t do it again.”