One-way or highway? West 238th could get makeover 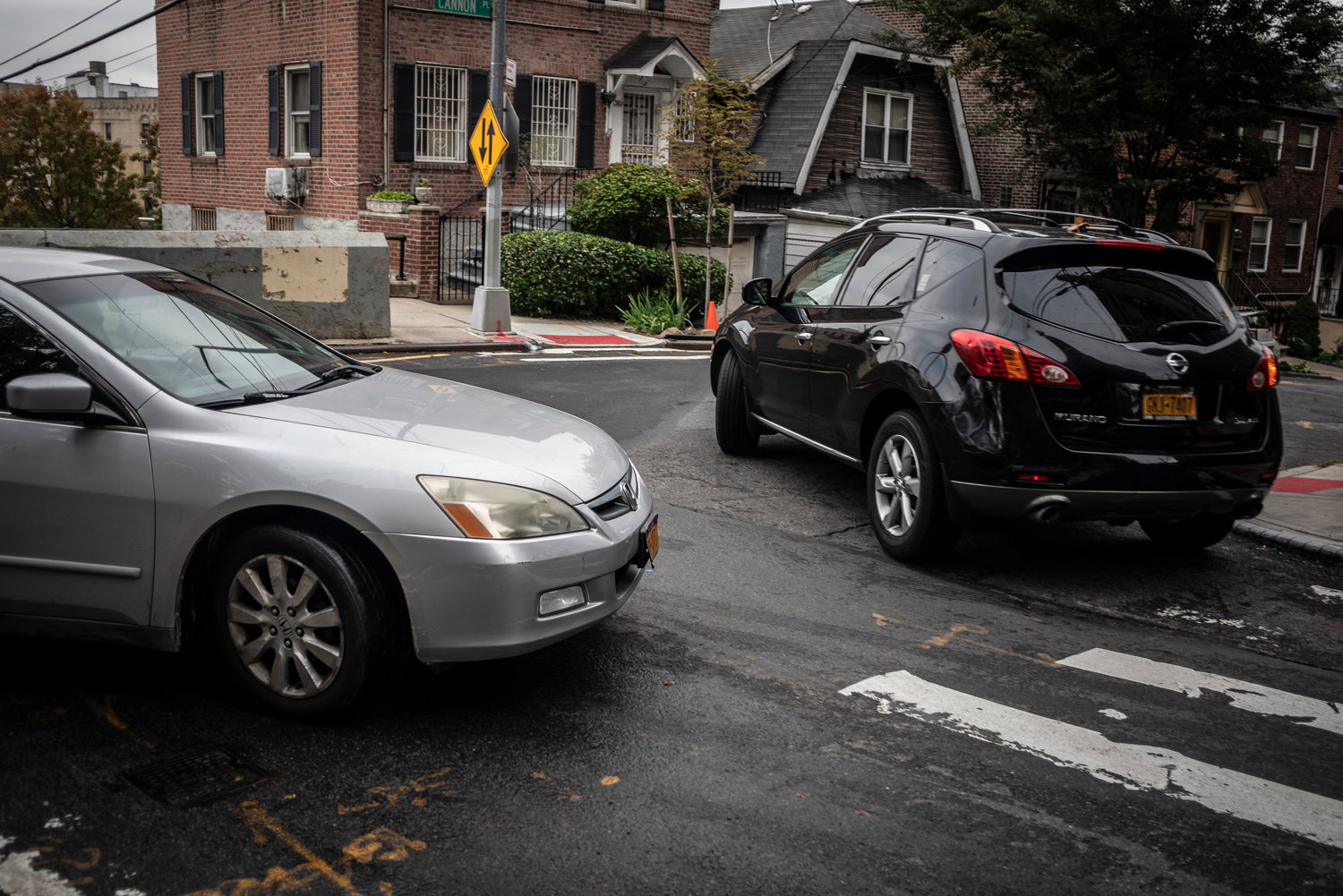 Two drivers barter for space at the mouth of West 238th Street between Cannon Place and Sedgwick Avenue. These three streets were at the center of a recent DOT study to convert this section of West 238th into a one-way street.
HIRAM ALEJANDRO DURÁN 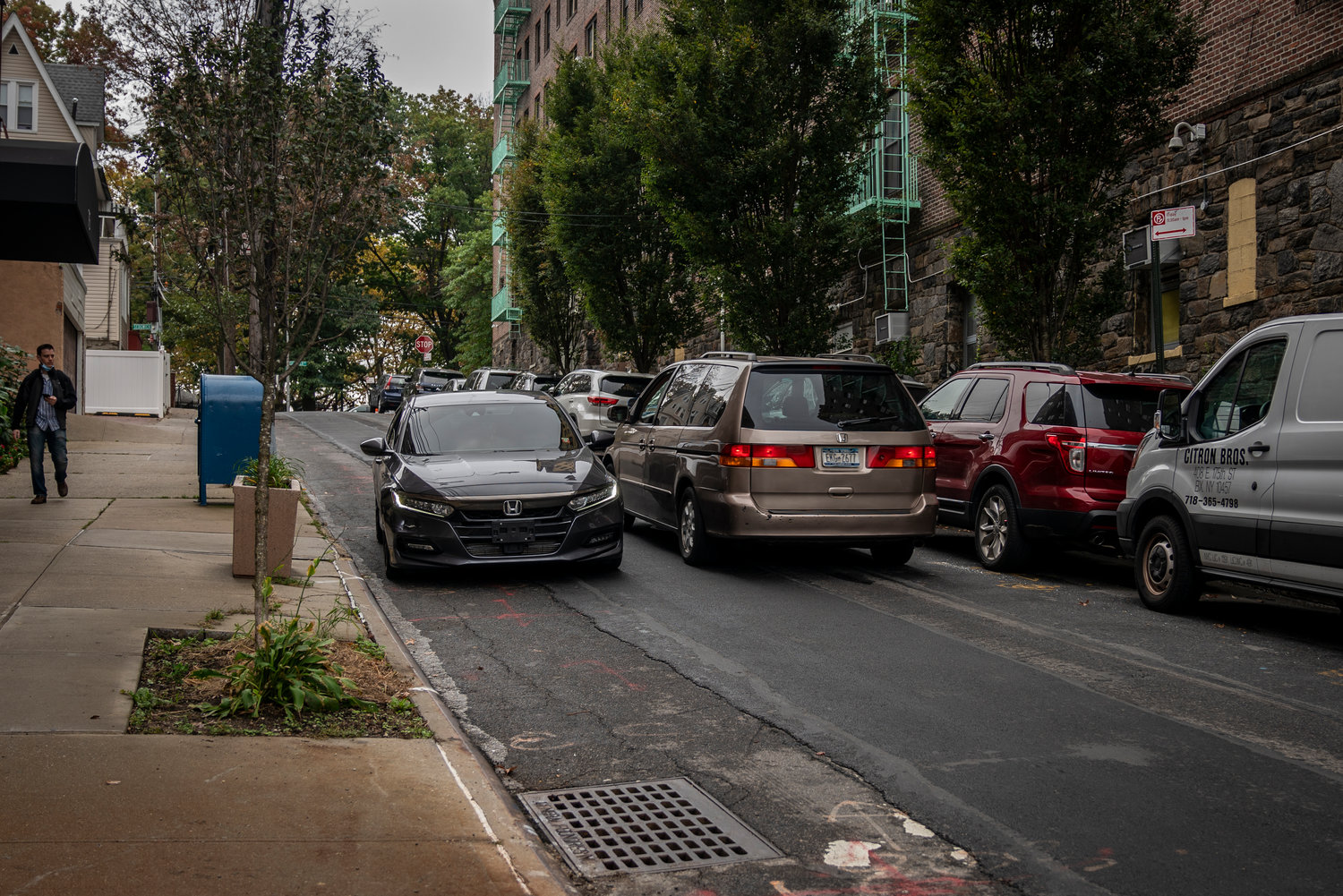 Narrow streets could be considered part of a neighborhood’s charm. But it also presents issues like traffic jams and potential for collisions, which is part of the reason why some want West 238th Street between Cannon Place and Sedgwick Avenue to become one-way.
HIRAM ALEJANDRO DURÁN 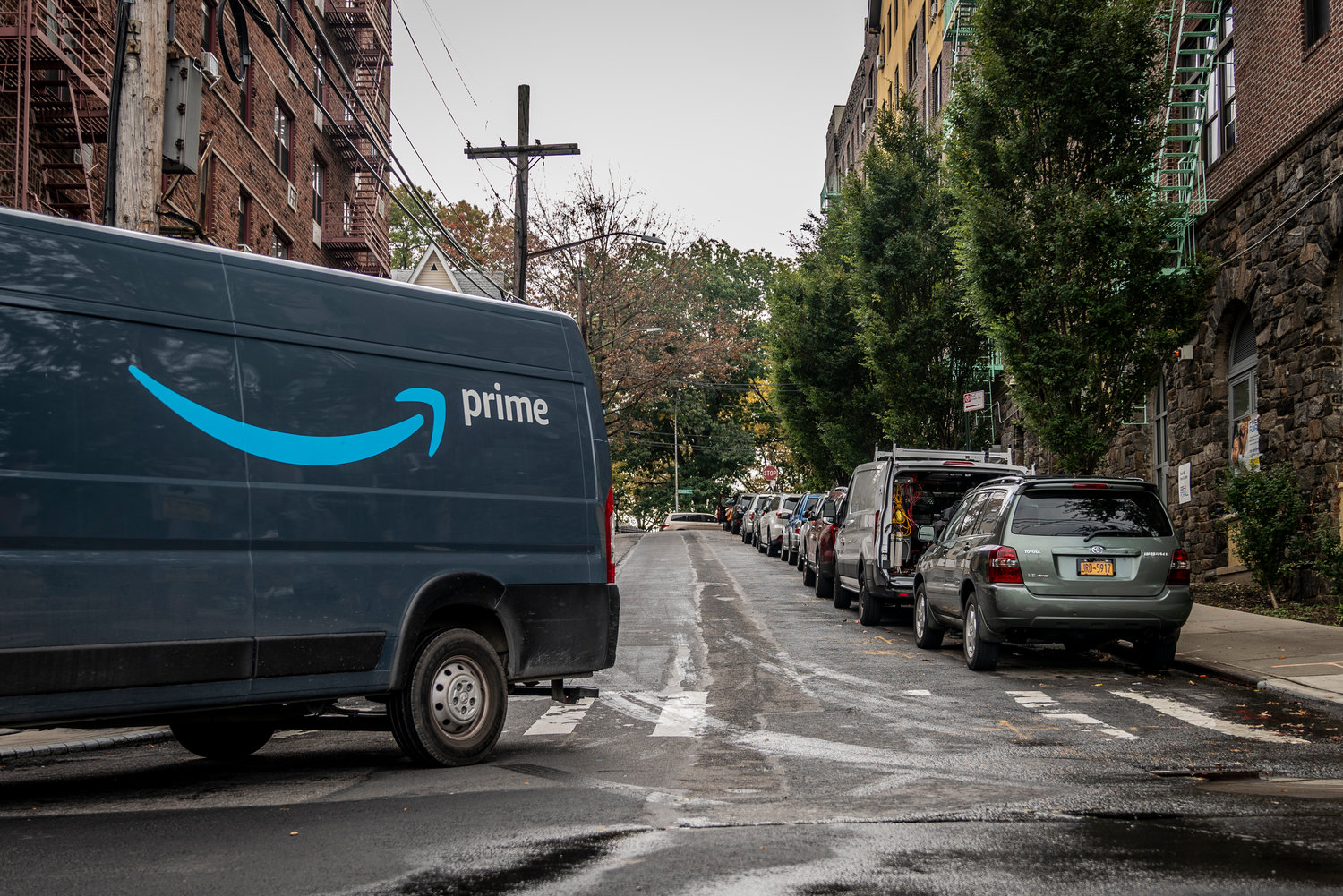 Some of the neighborhood’s narrower streets can only accommodate one direction of traffic at a time when cars park on both sides of the street. One of these streets — West 238th Street, between Cannon Place and Sedgwick Avenue — might soon actually become a one-way street, at least officially.
HIRAM ALEJANDRO DURÁN 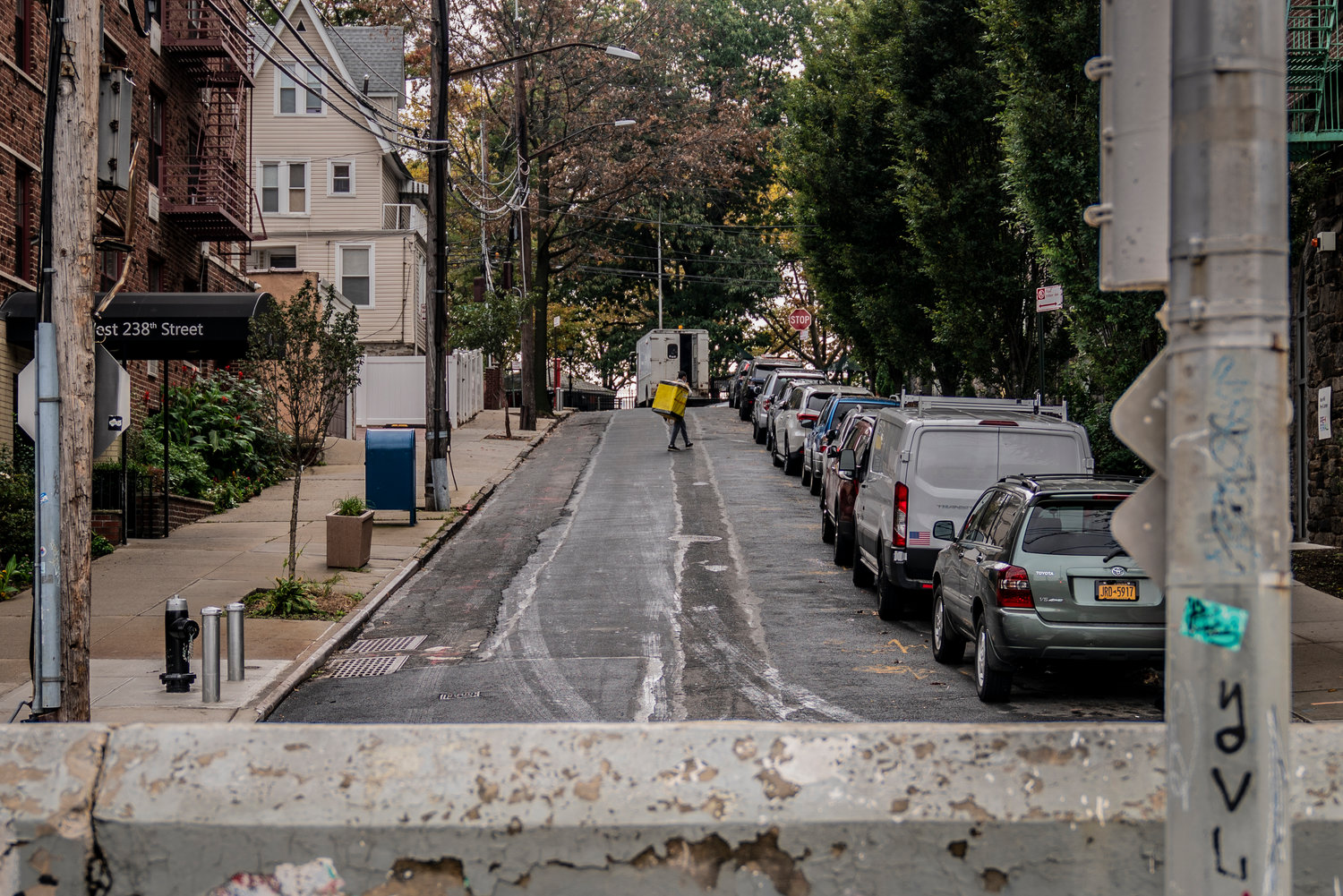 While the proposal to turn West 238th Street between Cannon Place and Sedgwick Avenue into a one-way street might have initially bypassed the community board, Bronx DOT commissioner Nivardo Lopez made it clear he wouldn’t even consider the conversion unless Community Board 8’s traffic and transportation committee was on board.
HIRAM ALEJANDRO DURÁN 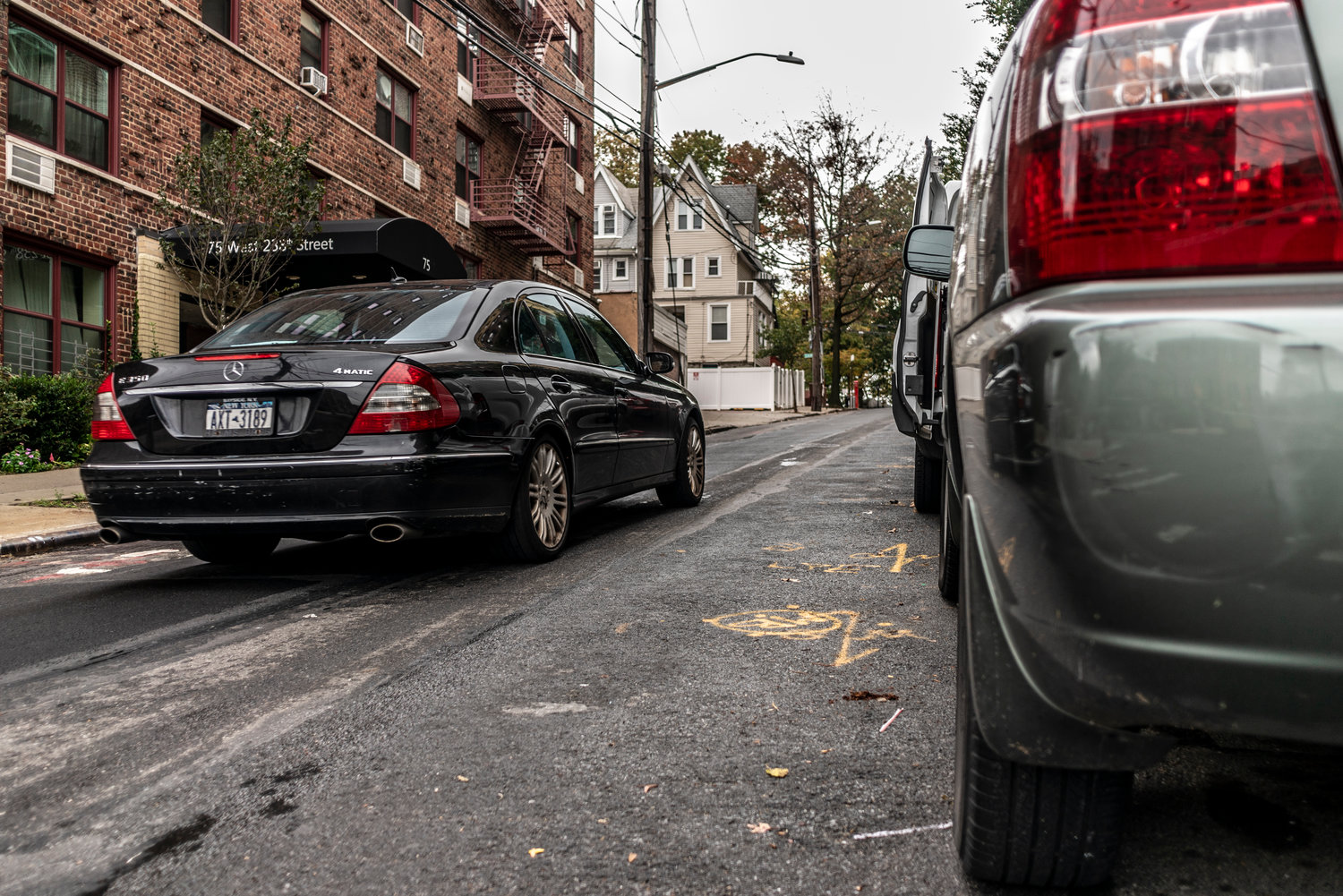 Community Board 8’s traffic and transportation committee is considering whether West 238th Street between Cannon Place and Sedgwick Avenue in Kingsbridge Heights should be converted into a one-way street. There’s no definitive timeline for when it might happen, as Bronx DOT commissioner Nivardo Lopez waits to gather various viewpoints.
HIRAM ALEJANDRO DURÁN
Previous Next
By ROSE BRENNAN

If there’s one thing this part of the Bronx is known for, it’s narrow streets.

Sometimes, parking on both sides of the street is so restrictive, it can really only accommodate one-way traffic — even if it’s a two-way street. But for one Kingsbridge Heights street, officially changing its traffic flow might be a viable solution.

The road in question is West 238th Street, between Cannon Place and Sedgwick Avenue, on the northeast side of the Shalom Aleichem Houses, which some neighbors say might be better as a one-way. And although drag racing might dominate Community Board 8’s traffic and transportation committee business as of late, it doesn’t mean other street issues are being forgotten.

Normally, a request to make a street one way would first go to the community board and then to the city’s transportation department. But not this time. DOT already is studying the possibility of changing the traffic flow of West 238th, which would allow only westbound traffic. It could complement nearby Giles Avenue, which is an eastbound one-way street just a block away.

DOT jumped the gun bypassing the community board, borough transportation commissioner Nivardo Lopez told the committee during a recent meeting. And that shouldn’t have happened. Now DOT is bringing the issue before the traffic and transportation committee for its input before considering any changes.

“Before we initiate any study for a one-way conversion, we would like to get a letter of support from the community board prior to any study, just so everyone is on the same page with regards to the request and the study,” Lopez told the committee. “Something got lost here.”

Still, there’s no hurry to make any changes to West 238th, Lopez said. In fact, the ball is essentially in the committee’s court.

“We informed the constituent who made the request that while we made a determination, we are now consulting with the board, and that we will move forward when the board gives us direction,” Lopez said. “I understand they should have no votes happening today. That’s totally fine. We’re not rushing to do this at all.”

Lopez also discussed the potential safety issues a narrow street might play. He didn’t dismiss those concerns, but he said the transportation department’s primary concern was evaluating the broader roadway network.

West 238th is not a hotspot for traffic accidents, Lopez added.

“We definitely don’t have any severe crashes or anything,” Lopez said. “This is not a section or roadway that popped up on our region’s priority list.”

Some at the meeting were unsure if turning this section of West 238th one-way was the correct answer. Committee vice chair Deb Travis noted the potential for traffic jams at West 238th and Sedgwick — a complaint Lopez is all too familiar with — and asked the best way to have traffic slowed. When cars are going too fast, she said, the potential for accidents increases.

The key, Lopez said, is more signs and street markings, but even more importantly, enforcement by traffic cops. To him, there’s no use installing signs if drivers ignore them anyway.

Buzz Roddy lives on that stretch of West 238th, and believes that while his street has problems, two-way traffic isn’t one of them. He’s actually more bothered by noise from the street.

“There are some minor traffic jams, but the problem is more with impatient people leaning on their horns,” Roddy said. “The traffic soon clears up. I have not seen more than the odd fender-bender over the 16 years I have lived on the block.”

However, if the city’s transportation department does move forward with changing West 238th, Roddy believes traffic should flow away from Sedgwick and Jerome Park Reservoir, not to it.

“The noise from the trucks driving in low gear up the hill is bad enough already,” Roddy said. “This would only make it worse.”

That works for DOT’s Lopez, who said the street had more traffic in that direction anyway.

CB8 doesn’t plan to weigh in on the West 238th issue anytime soon — at least not in 2020. When it does, the transportation department will be listening.

“We’re not doing anything at the moment,” Lopez said. “We have this study. We have this recommendation. But ultimately, we are going to take our guidance from the community board.