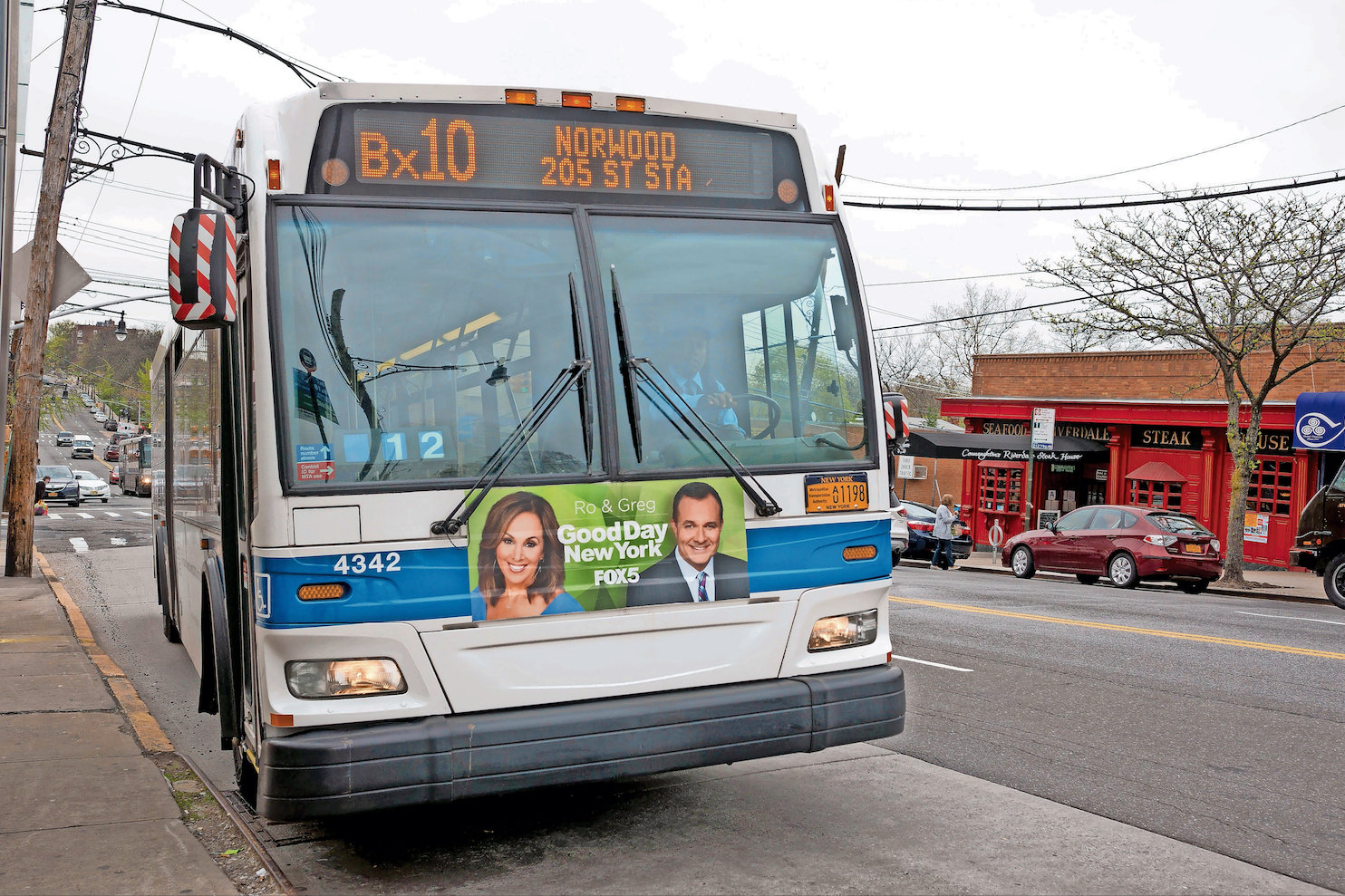 After months of not doing so, city buses began front-door boarding and fare collection this past Monday. With new barriers set up for drivers, the MTA hopes to recoup the tens of millions it says it’s lost from bus fares alone.
JULIUS CONSTANTINE MOTAL / File 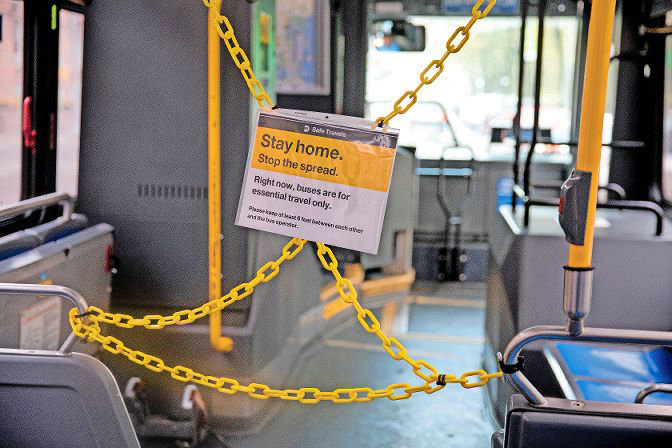 Barriers like these were put in place during the beginning of the American leg of the coronavirus pandemic. Now, they’ve come down to allow for more social distancing. Front-door boarding and fare collection returned to buses on Monday.
JULIUS CONSTANTINE MOTAL / File 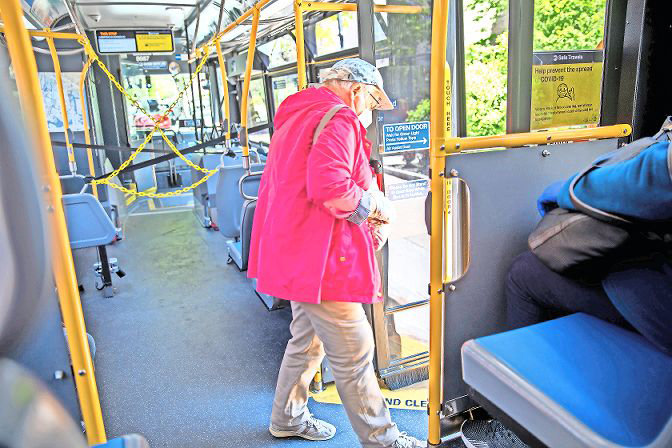 For several months, passengers could only use the rear door to board and exit city buses. But on Aug. 31, front-door boarding — and fare collection — resumed on buses throughout the city.
JULIUS CONSTANTINE MOTAL 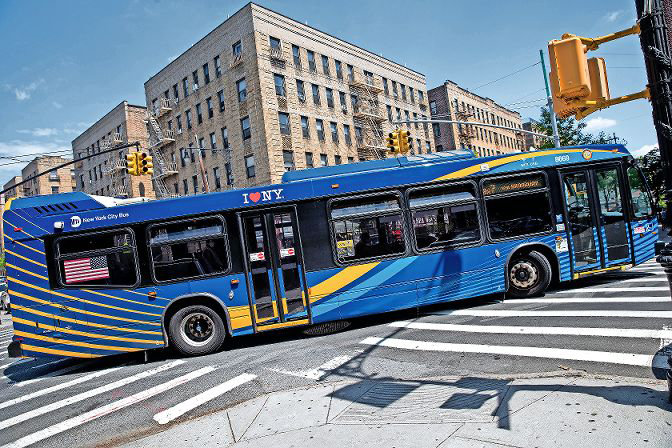 The MTA might pay a heavy price for the dip in ridership — and, on buses, fare collection — it saw during the coronavirus pandemic. If the federal government doesn’t supply the transit authority with $12 billion through the end of 2021, the state agency could be in serious trouble.
JULIUS CONSTANTINE MOTAL / File
Previous Next
By ROSE BRENNAN

Every cloud has a silver lining, even in a public health crisis.

In the midst of the widespread death and destruction of the coronavirus pandemic’s onset in the city, commuters — and simply those looking to just get around — could at least ride the bus at no cost.

But six months down the line, that’s not the case anymore. Fare collection and front-door boarding returned to the city’s buses on Monday, marking the end of the free rides.

The Metropolitan Transportation Authority suspended fare collection and front-door boarding on local and Select bus services at the end of March when the coronavirus pandemic was just beginning a prolonged attack on the city. Front-door boarding remained in effect on express buses and for physically disabled customers, though they weren’t allowed to sit in the first three rows in order to physically distance from bus operators, who were especially prone to getting sick.

“We are taking aggressive action to protect our thousands of frontline employees who are delivering a critical service to New York, moving the health care workers, first responders, utility workers and essential employees who are protecting us from this public health crisis,” MTA chair Patrick Foye said at the time.

Fare collection did remain in effect when payment boxes and off-board ticket machines were available. But largely, fares were not collected on city buses for the better part of half a year — a move that cost the agency tens of millions of dollars for service that is funded, in large part, by those fares.

With infection rates at lows not seen since the beginning of the pandemic, and the MTA seeing budget shortfalls in the billion, front-door boarding on buses has resumed. While there are obvious benefits at the fare box, reopening the front of the bus allows for up to 40 percent more space, MTA officials said, making it easier for passengers to socially distancing.

Returning buses to some sense of normalcy doesn’t come without its concerns, however. Especially from Dan Padernacht, chair of Community Board 8’s traffic and transportation committee, who remains worried about the safety of bus drivers. But his concerns go beyond the transmission of the virus.

“You’re now asking folks to pay fares again, so even pre-COVID, there’s always a risk of conflict between bus drivers and passengers,” Padernacht said. “Now, with the pandemic, I believe many people will be a little bit more sensitive or nervous on public transportation.”

As front-door boarding and fares return to city buses, the MTA might be facing bigger problems. Due to the unprecedented loss of bus ridership and revenue during the pandemic, the transit authority estimates it lost some $431 million. Not collecting bus fares alone cost the MTA $159 million.

Padernacht is less optimistic. He doesn’t think collected fare money will even come close to supplementing the MTA’s financial need, but it might make a “very small dent.”

While bus ridership is slowly rising — especially compared to the low ridership of March and April — Padernacht thinks it could drop again now that passengers boarding will have to pay. However, that loss might be recouped as many students are set to return to school by the end of the month.

“It’s interesting because they’re rolling it out with school,” Padernacht said. “Because of school, you will have an increase of ridership of the buses for students. I believe there will be a decrease in ridership for those who use the bus to go to and from work.”

While the city largely has the coronavirus pandemic under control, Padernacht is still hesitant about safety on public transportation — especially buses. In addition to mask-wearing and physical distancing, he believes ventilation is key to curbing the spread of the coronavirus on public transportation. And while keeping windows open remains an option for the immediate future, that won’t be the case as the winter months approach.

And when the air turns colder, walking might become less enjoyable, not to mention the added obstacles of snow and ice.

The combination of those conditions might lead to more people opting to take the bus. And to Padernacht, an enclosed, densely populated space is one of the worst places to be when the coronavirus is still a threat — and the city might end up right back where it started.

“Especially in the morning and afternoon commute hours, our buses are generally packed,” he said. “What (passengers) can do is wear a mask and be cognizant of others around them.”