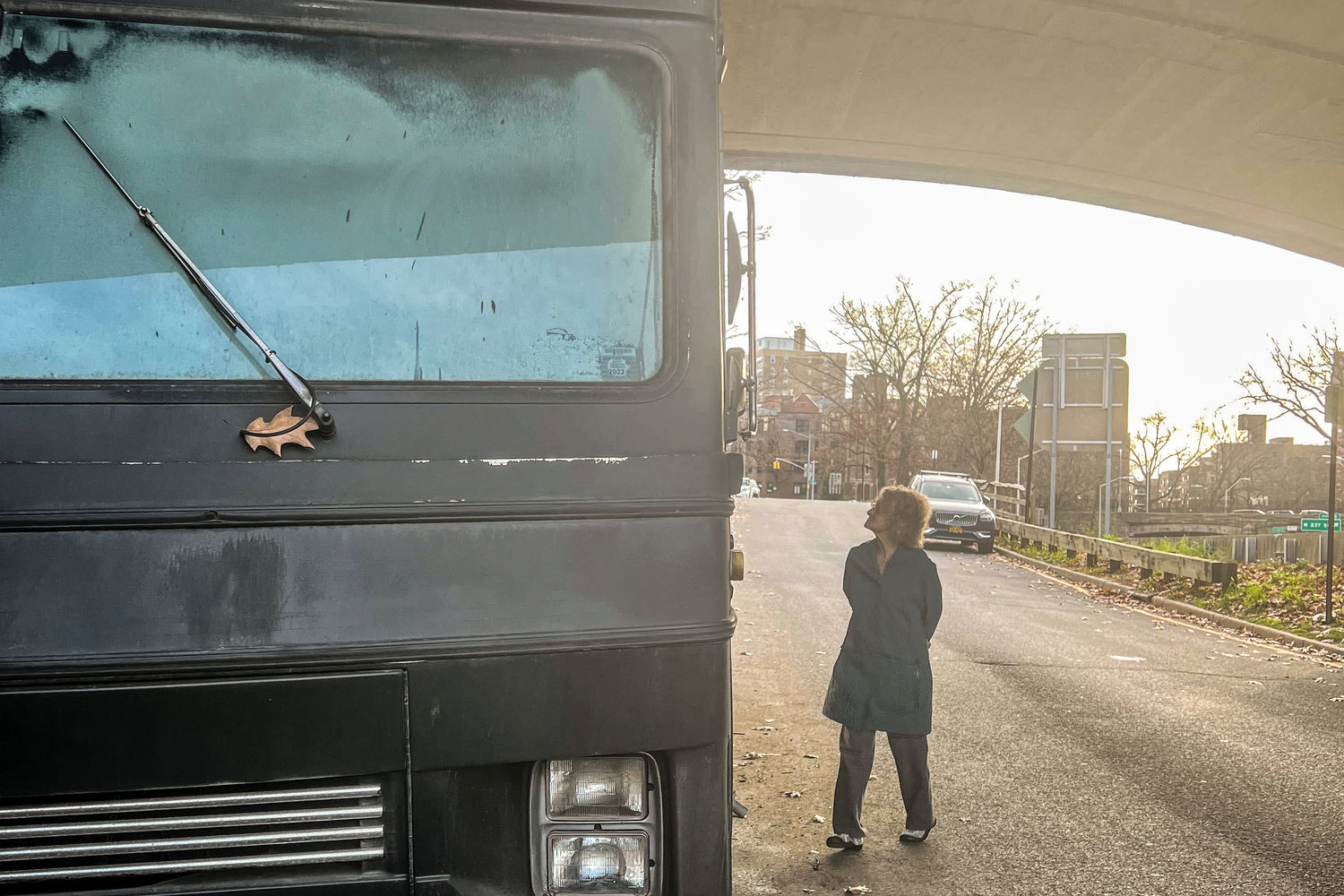 Judith Veder inspects camper on Henry Hudson Parkway East and Manhattan College Parkway. The camper with a Vermont license plate was allegedly parked under an overpass for months without being moved.
Stacy Driks 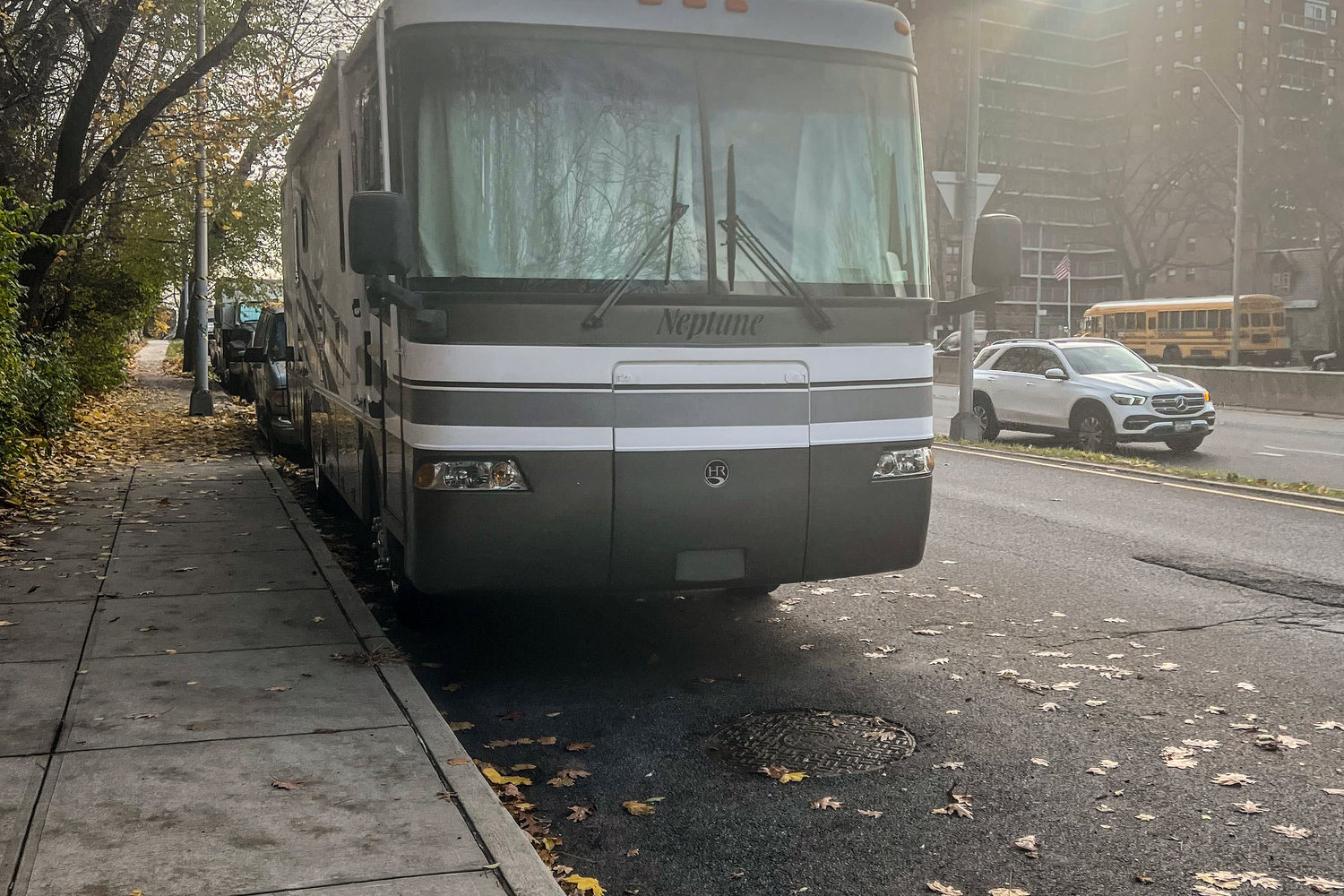 Camper located on Henry Hudson Parkway East between West 246th Street and West 250th Street has a Pennsylvania license plate and allegedly was parked there without moving for months.
Stacy Driks
Previous Next
By Stacy Driks

Living in Riverdale can be costly for homeowners as they pay for the quiet and safety of their neighborhoods. But for those who call Henry Hudson Parkway East their home, they don’t mind the noise nor the crime.

Just ask Judith Veder, who has been paying close attention to campers or RVs along the parkway for the past six months. These homes with wheels are allegedly parked for weeks, if not months in the same location where alternate-side of the street parking rules are not in effect and no parking signs are placed.

The Riverdale Press witnessed two campers, or motor homes, parked  on Manhattan College Parkway, a stone’s throw away from Bell Tower Park, and another between West 246th and West 250th streets.

These two campers are not registered in New York. In fact, one vehicle has a license plate says Vermont, and another a temporary paper plate in Pennsylvania that expires after Christmas Day.

New York has high registration fees as well as high auto insurance rates depending on the location, driver’s age, record, and type of vehicle. Registering a car in another state without paying those New York vehicle-related bills might be cheaper but it is also unlawful.

According to Progressive, the auto insurance company, it is illegal to park your vehicle for a long time in another location, even if you know or are related to the person you are staying with.

The repercussion can be a fine or probation.

They found Pennsylvania residents pay an average of $1,214 a year, while New York resident’s car insurance averages at $1,872 a year. New Hampshire drivers pay on average about $1,000 per year for car insurance.

“I would have asked him (camper owners) do you know there’s a law called the New York City storage law,” Veder said.

The city’s transportation department deems it illegal to park or store any vehicle in excess of seven consecutive days. This rule applies in all neighborhoods.

Veder filed several complaints with 311. They resulted in two campers being towed for a violation.

When officers are not handling an emergency situation, they visit the location of the complaint to monitor. If the officer determines the complaint is necessary after responding, the vehicle will be ticketed or towed, depending if the tickets total $101 in judgment debt.

“At the beginning, I thought someone abandoned it, but I have seen a person come by,” Veder said.

Another transportation law forbids vehicles from being left on public property for more than 48 hours without being in the vehicle.

In other instances, if the vehicle did not have license plates, it must meet the criteria of junk for the sanitation department to collect the metal. If the criteria are not met, the local precinct treats it as a vehicle with plates and they tow it at the owner’s expense.

As for one of the campers, Veder was concerned for the driver.

“It makes me feel a little guilty because I have what I need to live and maybe this guy doesn’t,” Veder said. “But he can be somewhere else — not in my neighborhood.”

On Manhattan College Parkway, a bridge creates a shelter for the vehicle’s owner.

While visiting the location, a man from New Hampshire claimed he paid $400 a month to park three vehicles in a parking lot.

He says he rents his cars through a peer-to-peer car-sharing app. He began to park it on Henry Hudson Parkway for free — since the camper was doing it.

Two smart cars with the “live free or die” New Hampshire license plate motto are  either being offered to rent or are being moved around every two weeks to warm up the engine and avoid a fine, according to a witness.

Some residents in greater Riverdale area own multiple vehicles but move them legally as required by alternate side of the street parking laws.

Veder claimed a Riverdale resident she knows has at least 10 old cars and an old yellow cab.

“This is Riverdale, there is very little street parking,” she said.