Out to pasture with some returning Vannie residents 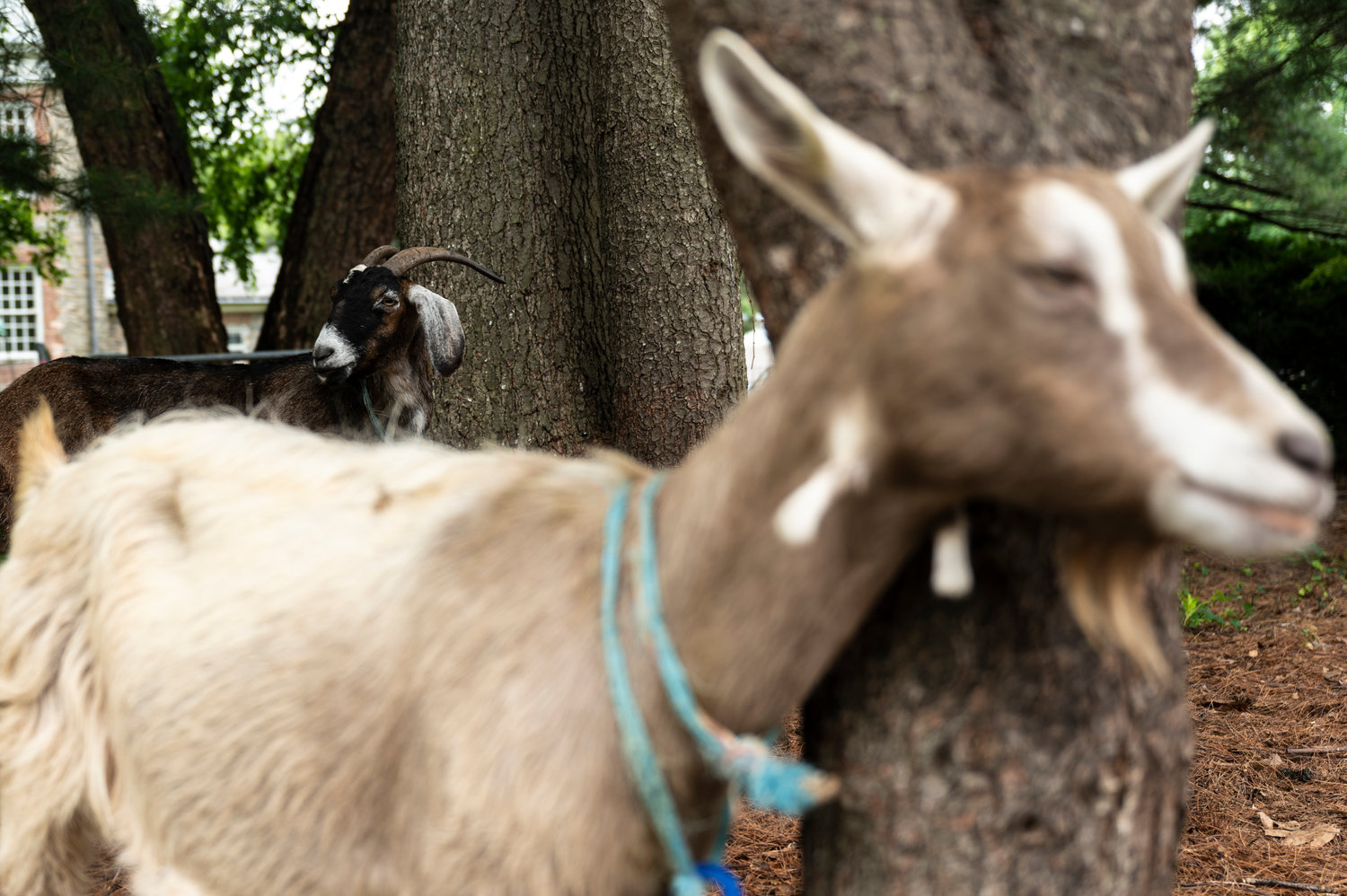 Taffy and Juliet, hanging out under shady trees on a sunny day, are two of the Van Cortlandt Park brought in for a summer of munching on invasive plants.
HIRAM ALEJANDRO DURÃN 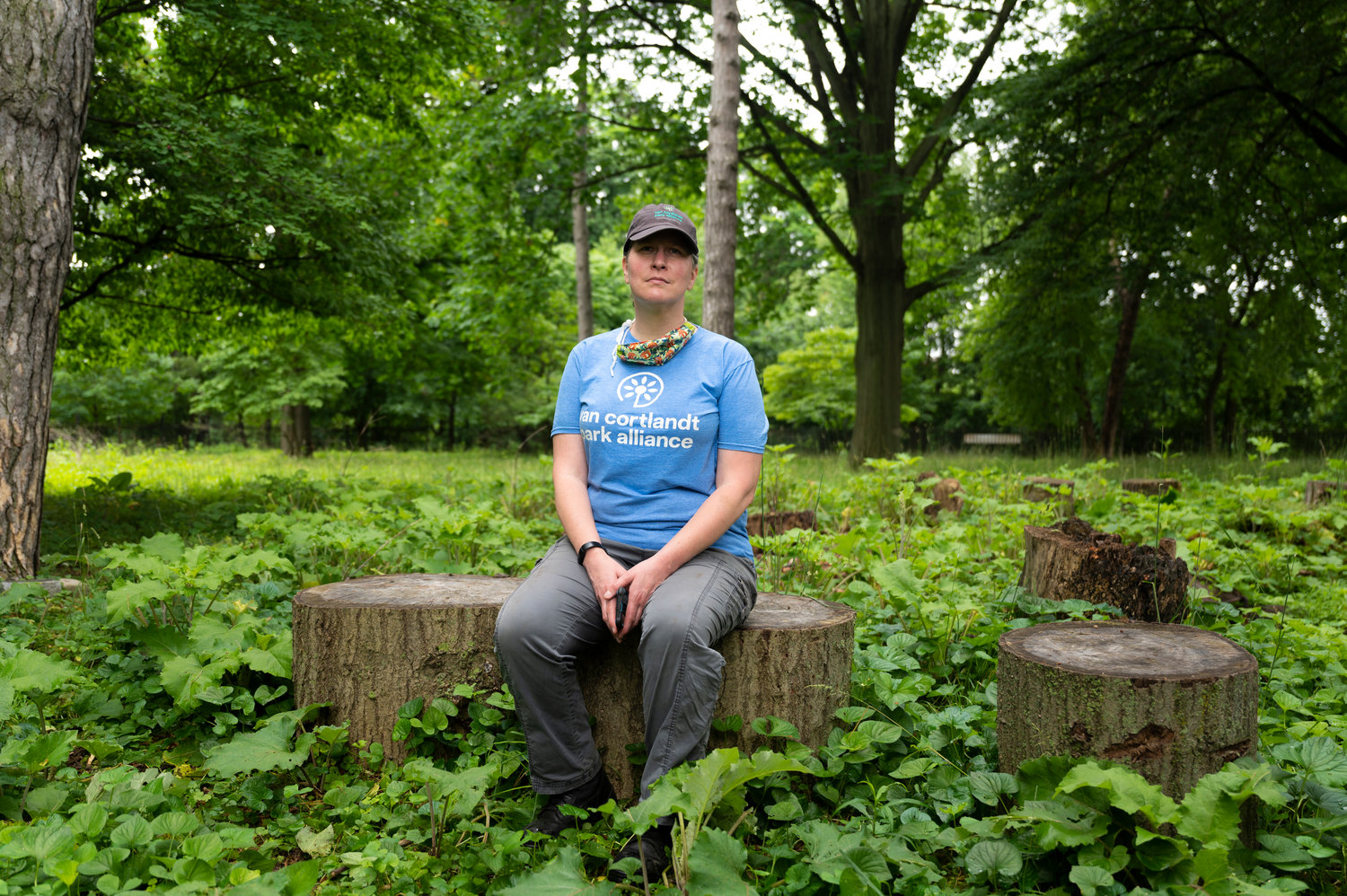 Christina Taylor, the programs and operation director for the Van Cortlandt Park Alliance, was one of the catalysts for bringing in goats to take care of invasive plants like burdock and poison ivy.
HIRAM ALEJANDRO DURÃN 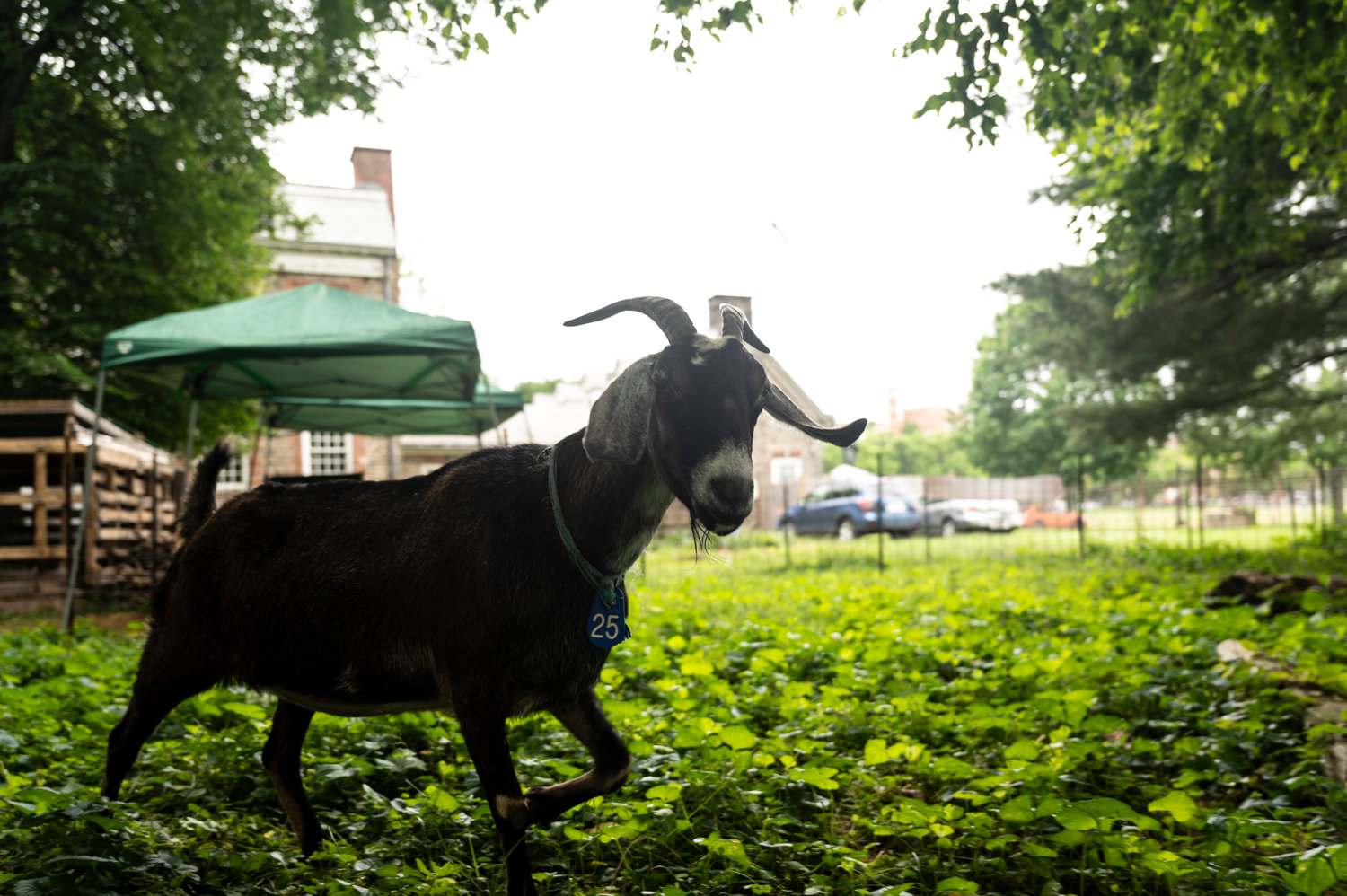 Juliet prances in the pasture where she wolfs down invasive plants like poison ivy and burdock. Poison ivy doesn’t harm goats, so Juliet simply sees it as another type of fresh, leafy green to feast on.
HIRAM ALEJANDRO DURÁN
Previous Next
By SOPHIA ROMANO

Maintaining the grounds at Van Cortlandt Park is not just a job for humans — at least not this summer. That’s because the park’s hardest-working guests — Taffy, Leo and Juliet — have arrived, continuing what has become a seasonal tradition of welcoming goats to gobble up all of Vannie’s invasive plants.

Working from their park enclosure nestled behind the Van Cortlandt House Museum, the goat trio probably didn’t think they’d be a big enough deal to have their own ambassadors. Yet, these three have attracted enough attention from passers-by and young children to warrant exactly that.

Bette Clark is one of those adding “goat ambassador” to her resume. She takes pride in her work for the Van Cortlandt Park Alliance — the non-profit that helps the city manage Vannie — volunteering as part of a special cleanup crew picking up trash around the park on Sunday mornings.

“All of this is part of educating the public about the incredible resource that Van Cortlandt is to all of us,” Clark said.

She believes the presence of Taffy, Leo and Juliet is an educational opportunity for kids. Many children raised in dense urban areas like the Bronx don’t encounter too many farm animals. The same is true with adults. Clark fondly recalls one woman who said the Vannie goats reminded her of her own farm animals growing up on her Jamaican family farm.

“There’s something about the natural beauty of the park that I’ve always wanted to share with other people,” Clark said.

The Vannie alliance first introduced the goats a couple years ago as part of its landscaping plan for the museum grounds in the hopes of beautifying the surrounding area. An herb garden was planted and stonework was put down, but there was one area of the property that always irked those who worked at the museum like Christina Taylor, the Alliance’s programs and operations director.

It’s located between the restrooms and the museum, on ground so uneven, the parks department is reluctant to send in their lawnmowers because they get damaged. It’s an area chock-full of poison ivy as well as burdock plants reaching up to six feet tall.

Originally, Taylor tasked high school interns to spend days removing the pesky plants only for them to grow back the next year. But Taylor realized goats were a better, more efficient way to maintain the area.

At first, such a prospect was just a laugh. But what started as a joke soon turned into a solution. The alliance connected with Green Goats, an organization that puts farm animals to work to naturally eradicate invasive plant life. The coronavirus pandemic created some hiccups in getting the goats up and munching, but Taffy, Juliet and Leo were ready to go once summer started.

But it almost ended before it could begin. It rained June 3 when the trio arrived, and it seemed none of them wanted to leave the truck they arrived in.

The handlers found a way to lead them under a tent to stay dry. But then Taffy caught sight of the plants beyond the shelter, and strolled out for a snack.

Since then, the trio have been no problem at all. In fact, the only issue the alliance has had with goats is that they’re just too friendly. Sometimes the goats will be eating away, but they’ll stop the moment they see people, walking over to say hello.

Adorable as this is, it’s not the work the goats are there to do. That hasn’t been too much of a problem with this summer’s group, however. Taffy, Juliet and Leo are quite content letting human visitors simply stand and watch them eat.

And ambassadors like Clark, help, too. They answer questions from those watching the goats, and ensure they keep back, since the animals are usually covered with poison ivy oil.

“I have a bunch of different hats,” Clark said. “But I have a free enough schedule now where I can make my own hours, which is what gives me the time to be a goat ambassador— which I think is, right now, my favorite job.”

She spends two days each week as an ambassador, rotating with three other volunteers.

But even on her days off, Clark checks in.

“If I see something is needed now that I know they need fresh water all the time, I might step in,” she said.

As for a day in the life of a goat? With shelter and lots of fresh greens to eat, Taffy, Juliet and Leo seem to be living the dream. They get up in the morning and eat until they’re stuffed. Goats are ruminant animals, so they have to chew their cud. Once they digest, they get up again to eat and repeat the cycle throughout the day.

As a therapist, Clark sees the therapeutic benefits of being around animals, and has noticed how different they are both from other people and other animals. She’s been able to use her background in working with children who have some social problems to better understand the goats.

“It’ll be an interesting learning experience and a challenge for me to figure out how to relate the best way I can to these goats,” she said.

While goats are not too similar to humans, they’re also not that far removed — they have distinct personalities.

Leo is the friendliest. He likes to nibble on humans as he does the fresh greens, and along with Juliet is quite social. Taffy is the older of the three, and far more reticent. Taffy also is more fearful and stressed, Clark says, but she writes this stress off as nothing more than a product of moving from their home to a new environment, and eating new food around different people.

Getting to know Taffy better is Clark’s goal, hoping to bond with her and help her feel more comfortable.