Wants to succeed Andrew Cohen, who terms out in 2021 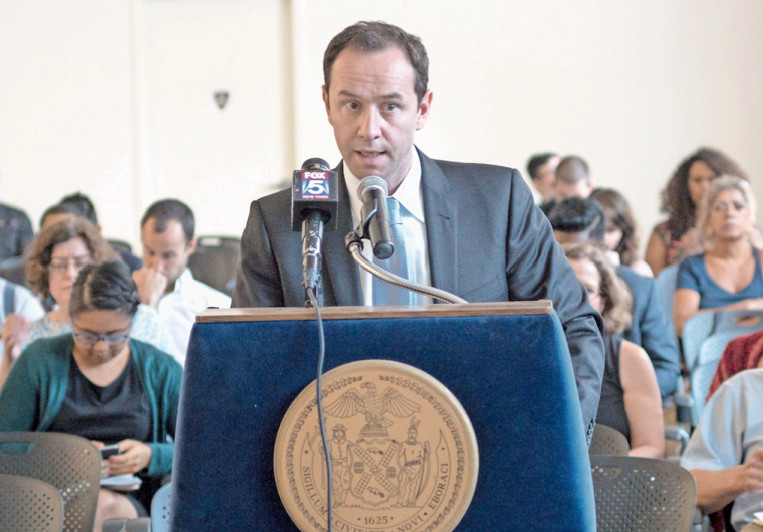 Dan Padernacht, a three-term chair of Community Board 8, is throwing his hat into the 2021 city council race in a bid to succeed Andrew Cohen.
File photo
By MICHAEL HINMAN

Andrew Cohen is all set to represent Riverdale and Kingsbridge on the city council until 2021. But for one would-be successor, there's no such thing as making plans for the future too early.

Attorney and former Community Board 8 chair Dan Padernacht officially announced his intention Tuesday to run for Cohen's seat, the first time he's sought public office since dropping out of a state senate race in 2010 that eventually led to the election of Gustavo Rivera there.

A second generation resident of Shalom Aleichem Houses off Sedgwick Avenue, Padernacht has never strayed too far from the neighborhood he grew up in, leaving only for college and law school. Despite success as a real estate attorney, Padernacht continuously finds himself drawn to public service.

"I enjoy helping people, and I enjoy serving the community," Padernacht told The Riverdale Press. "And as a councilman, I'll have a greater ability to do so."

And it's likely this particular race will require even more money.

Campaigns participating in the program can receive up to six times what was raised through more traditional means, as long as specific fundraising thresholds are met, and that raised money is limited to smaller contributions from individual sources.

Although he hasn't made a final decision as of yet, Padernacht plans to take advantage of the matching funds program, even if his future opponents don't.

There are a number of specific issues influencing Padernacht's decision to run like roads and youth, but he also hopes to build a better relationship between the city council and the form of local government that is close to his heart, community boards.

"The City of New York generally can use community boards much better than they do now," said Padernacht, who chaired CB8 for three years until stepping aside in 2017. "I think that many times, the city sees community boards as a hurdle rather than as a wealth of information. I think across the city, there's different views about community boards, and in my time as chair, I think our board worked well with elected officials."

But it needs to be a team effort between a community board and its local city council representative, Padernacht said. When that happens, "it's a good thing for the community."

It might be three years until the election, but Padernacht isn't the first to jump into the race. Candidates in four other districts already have begun to raise money for 2021, bringing in just under $20,000 so far.

"I didn't want to wait to let the community know that I'm running," Padernacht said. "It gives me more time to answer questions, and give people the opportunity to get to know me."

Read more about Padernacht's issue stances and his family's deep roots in the Kingsbridge community in the July 19 edition of The Riverdale Press.