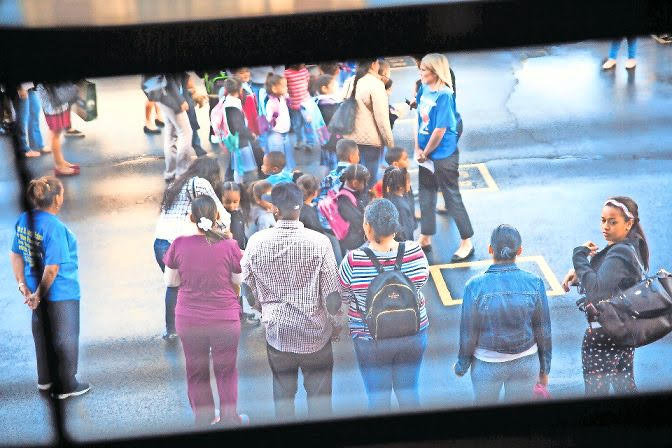 The Archdiocese of New York says it's closing 20 Catholic elementary schools, including St. John's School in Kingsbridge. Now its students must find a new home before the academic year in September.
JULIUS CONSTANTINE MOTAL / File 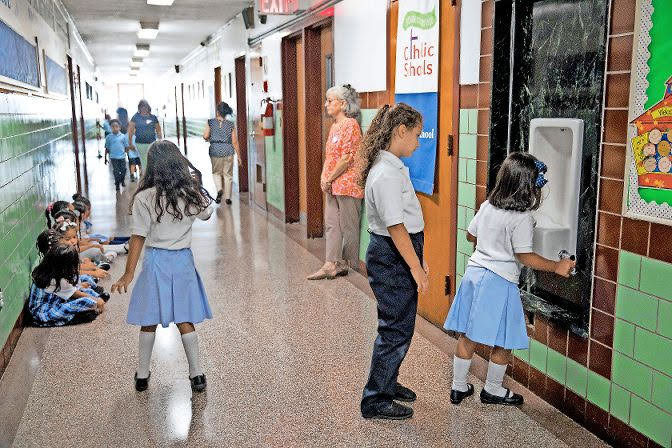 St. John's School was the only Catholic elementary school left in Kingsbridge. Now that its doors have closed, students and parents will have to look elsewhere — including "up the hill" — to continue their education.
JULIUS CONSTANTINE MOTAL / File 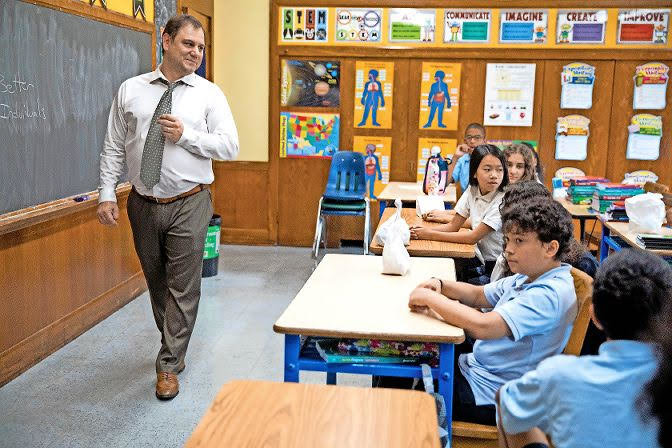 Due to the economic impact of the coronavirus pandemic, 20 schools throughout the Archdiocese of New York had to shut their doors. St. John's School in Kingsbridge was one of them, and its closure leaves only two Catholic elementary schools standing in this part of the Bronx.
JULIUS CONSTANTINE MOTAL / File
Previous Next
By ROSE BRENNAN

When the more than 260 students poured out of the doors of St. John’s School in mid-March as the coronavirus pandemic bore down on the state, they likely thought they would return soon. If not this academic year, then perhaps the next? At least by 2021, even in the worst-case scenario.

But it now seems that departure from the Kingsbridge Avenue school was the final one. St. John’s is one of 20 in the city and surrounding area the Archdiocese of New York has closed permanently.

The affected schools were not only in the Bronx, but also in other parts of New York City as well as Westchester, Rockland, Orange and Dutchess counties. In a letter to parents, Cardinal Timothy Dolan blamed the massive tuition revenue loss caused by the coronavirus pandemic, a loss that now impacts some 2,500 students and 350 faculty members.

St. John’s was among six schools closed in the Bronx, along with Nativity of Our Blessed Lady in Eastchester, Our Lady of the Assumption School in Pelham Bay, St. Luke School in Mott Haven, Sts. Philip & James School in Williamsbridge, and St. Thomas Aquinas School in West Farms. All 20 of the affected institutions were primarily elementary schools, although many taught students up to eighth grade.

“Children are always the most innocent victims of any crisis, and this COVID-19 pandemic is no exception,” Dolan said, in a release. “Too many have lost parents and grandparents to this insidious virus, and now thousands will not see their beloved school again.”

The pandemic had an impact on Catholic schools for several reasons, Dolan said in a separate letter to parents. Most of the affected schools were parochial, and their respective churches have not been open for religious services. This meant tithes couldn’t be collected, portions of which help fund the parish’s school.

In addition, many parents couldn’t pre-register for the upcoming academic year because they were furloughed or laid off due to stay-at-home orders as a result of the pandemic.

Adding all of that to a significant decline in new enrollments, it created the perfect storm for the schools to close, including St. John’s.

Many St. John’s parents are still reeling from what they considered a sudden and unexpected loss. Anisha Applewhite, whose son was supposed to enter second grade at the school, felt St. John’s could have been saved if the community had been called upon for help.

“Why wasn’t this information presented to us, if there was a problem with enrollment?” Applewhite asked.

“How come they didn’t reach out to us, so we could get the community together so we could support enrollment?”

Applewhite is finding the process of locating a new school to be more difficult than expected. She and other St. John’s parents do not consider sending their children to a public school an option.

“It’s no offense to the schools in the area,” Applewhite said. “Overcrowdedness is plaguing our Bronx schools.”

School overcrowding would already be an issue for any parent choosing a school for their child. But especially in the middle of a public health crisis which mandates physical distancing, overcrowding could be especially dangerous.

With public schooling ruled out, Applewhite had to consider other options. There’s one charter school in the immediate area she likes: Amber Charter School on Corlear Avenue. But the waiting list for enrollment is quite long, and it’s unlikely a spot will open up for Applewhite’s son before the academic year begins.

The archdiocese said it would help parents affected by the closings find other nearby Catholic elementary schools. There are two remaining in this part of the Bronx: St. Gabriel’s School on West 235th Street and St. Margaret of Cortona School on West 260th Street.

But there are still issues with enrolling in either of the schools. Many St. John’s parents would likely opt for St. Gabriel’s, as it is closer to their Kingsbridge neighborhood. But to Applewhite, her son having to go “up the hill” to continue his Catholic education is asking a lot.

“There’s no other option but shifting us to Riverdale,” Applewhite said. “At least if we had another alternative in the same area — maybe within half a mile — we’d be OK with that. Sending us up the hill (is) not fair.”

One option did exist at one point. Visitation School welcomed children for decades at West 239th Street near Broadway, but that church — and school — closed down in 2017. In fact, many of the students who had attended that school ultimately ended up at St. John’s.

Cost also could be an issue for displaced students and their families. Both St. Margaret’s and St. Gabriel’s have a steeper tuition than St. John’s. In the case of St. Gabriel’s, it’s nearly $1,000 more per year.

However, the archdiocese says it’s offering “transition aid” — as much as $1,000 — to each affected family at St. John’s, provided they enroll in a neighboring Catholic school.

But for now, Applewhite and other St. John’s parents are not going down without a fight.

She said protesting could be an option in the future, and the parents recently published an online petition to keep the school open. As of July 13, the petition attracted more than 130 signatures.

“These students deserve a sense of security of returning to their classrooms with their classmates,” according to the petition, “especially with the uncertainties of the new norm of schools.”