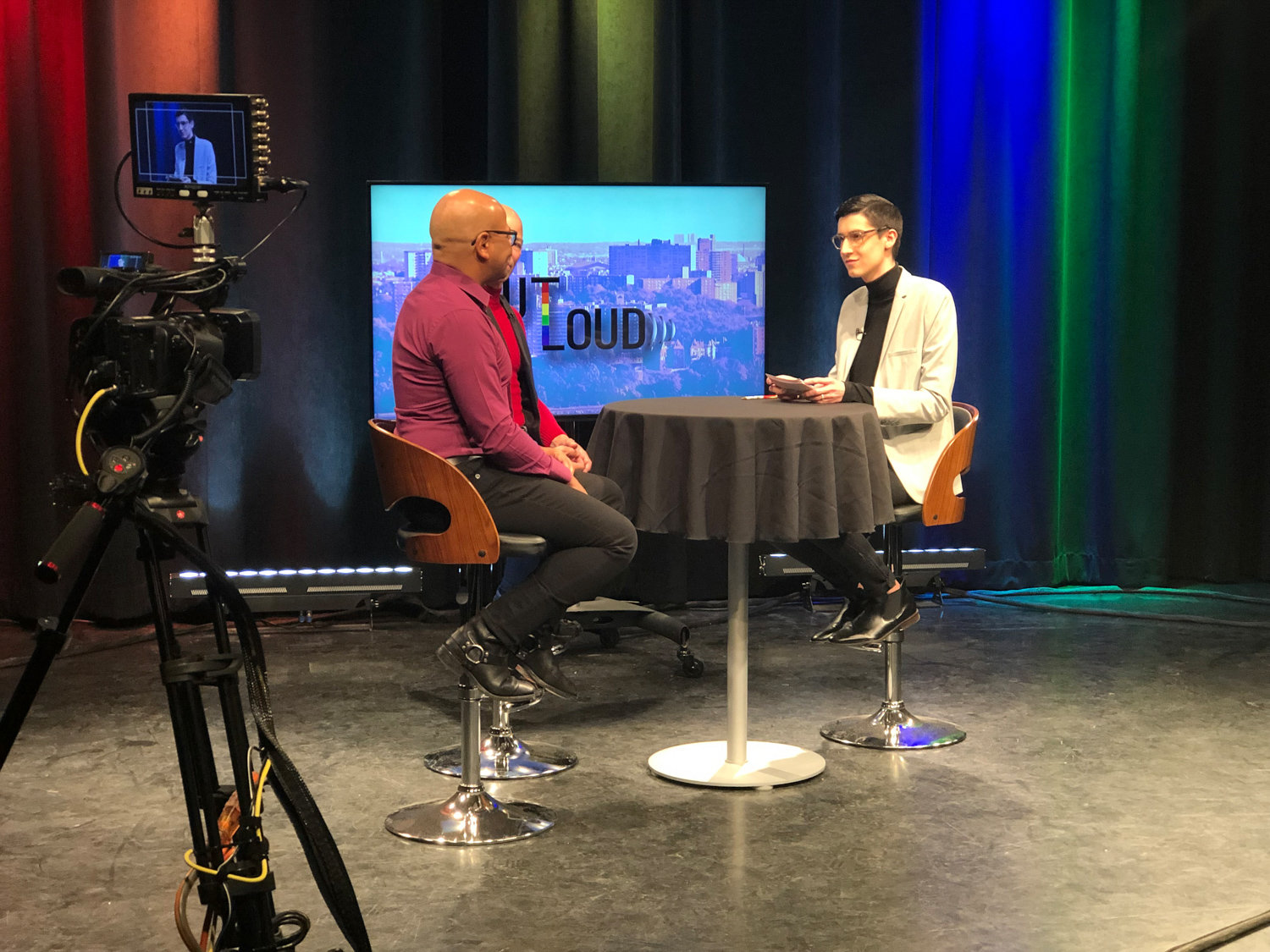 Anthony Parker, right, host of the monthly LGBTQ television show ‘Out Loud,’ interviews Arthur Aviles and Charles Rice-Gonzalez, left, of the Bronx Academy of Arts and Dance for his first episode on BronxNet.
Courtesy of Anthony Parker 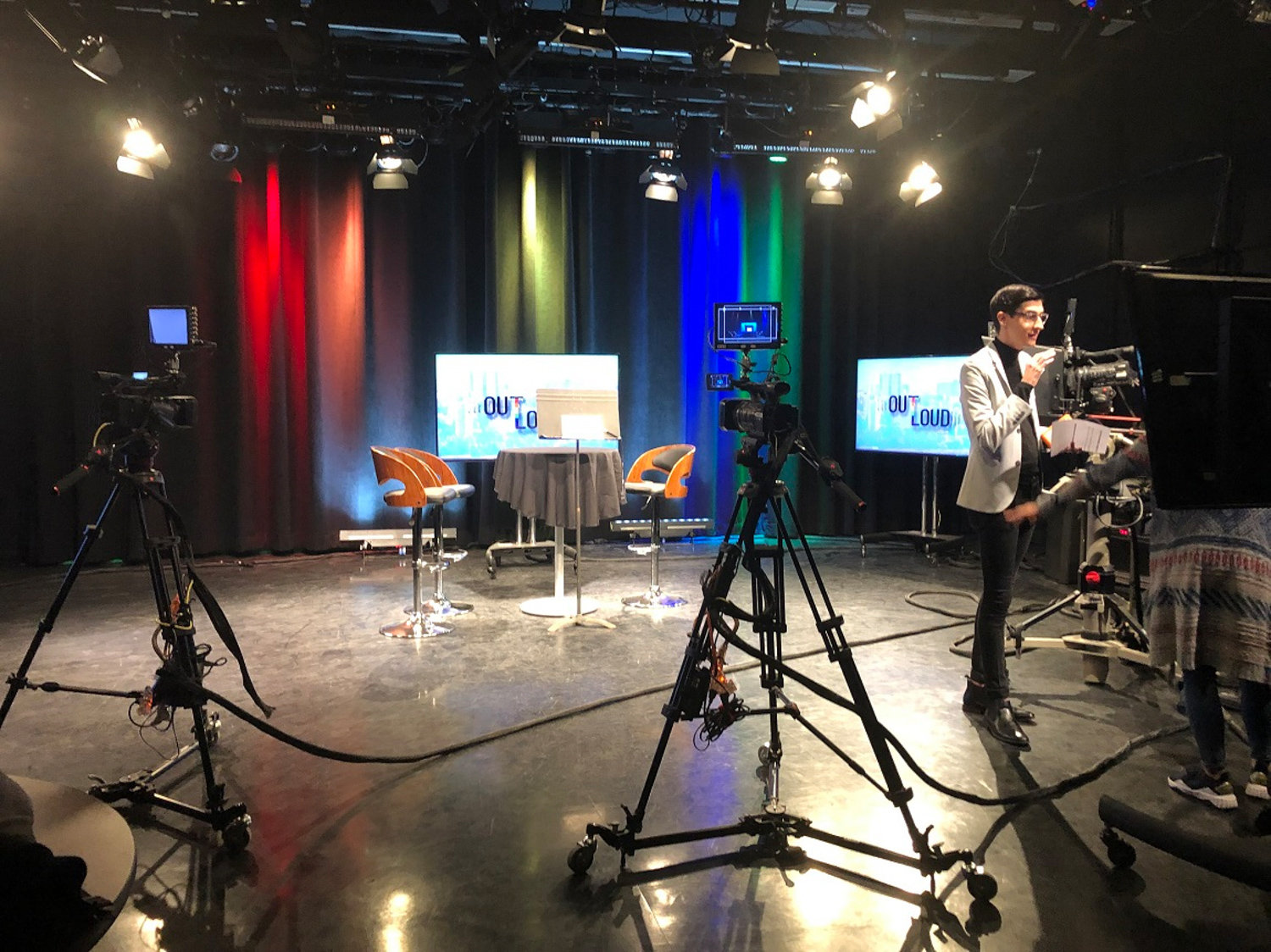 ‘Out Loud’ is a BronxNet monthly television show, which aims to spotlight various LGBTQ individuals from around the Bronx. Host Anthony Parker, right, writes and plans each episode.
Courtesy of Anthony Parker 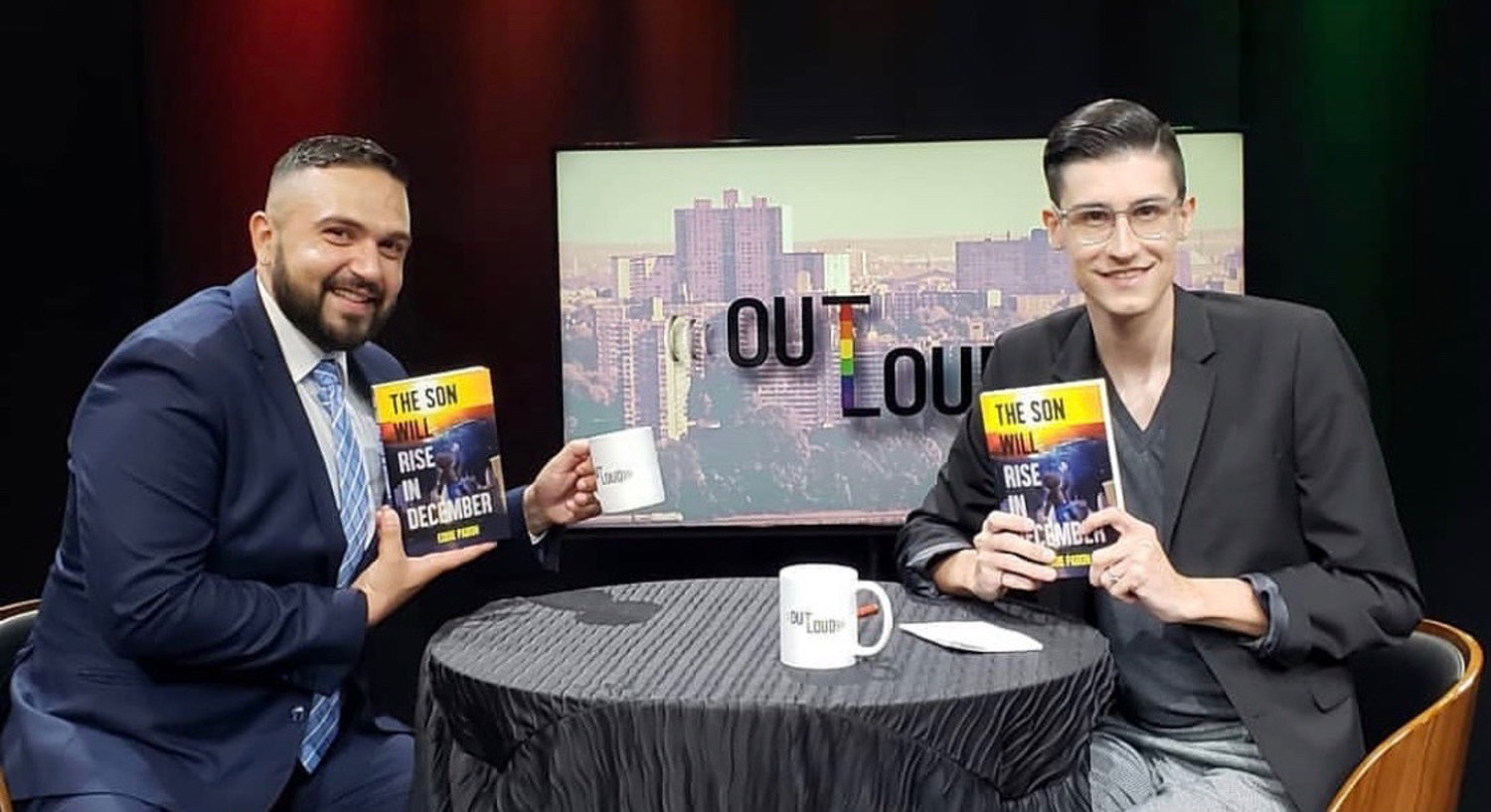 Anthony Parker, right, sits down with local author Eddie Pabon, left, to talk about his novel ‘The Son Will Rise in December,’ for the ‘Out Loud’ television program on BronxNet.
Courtesy of Anthony Parker 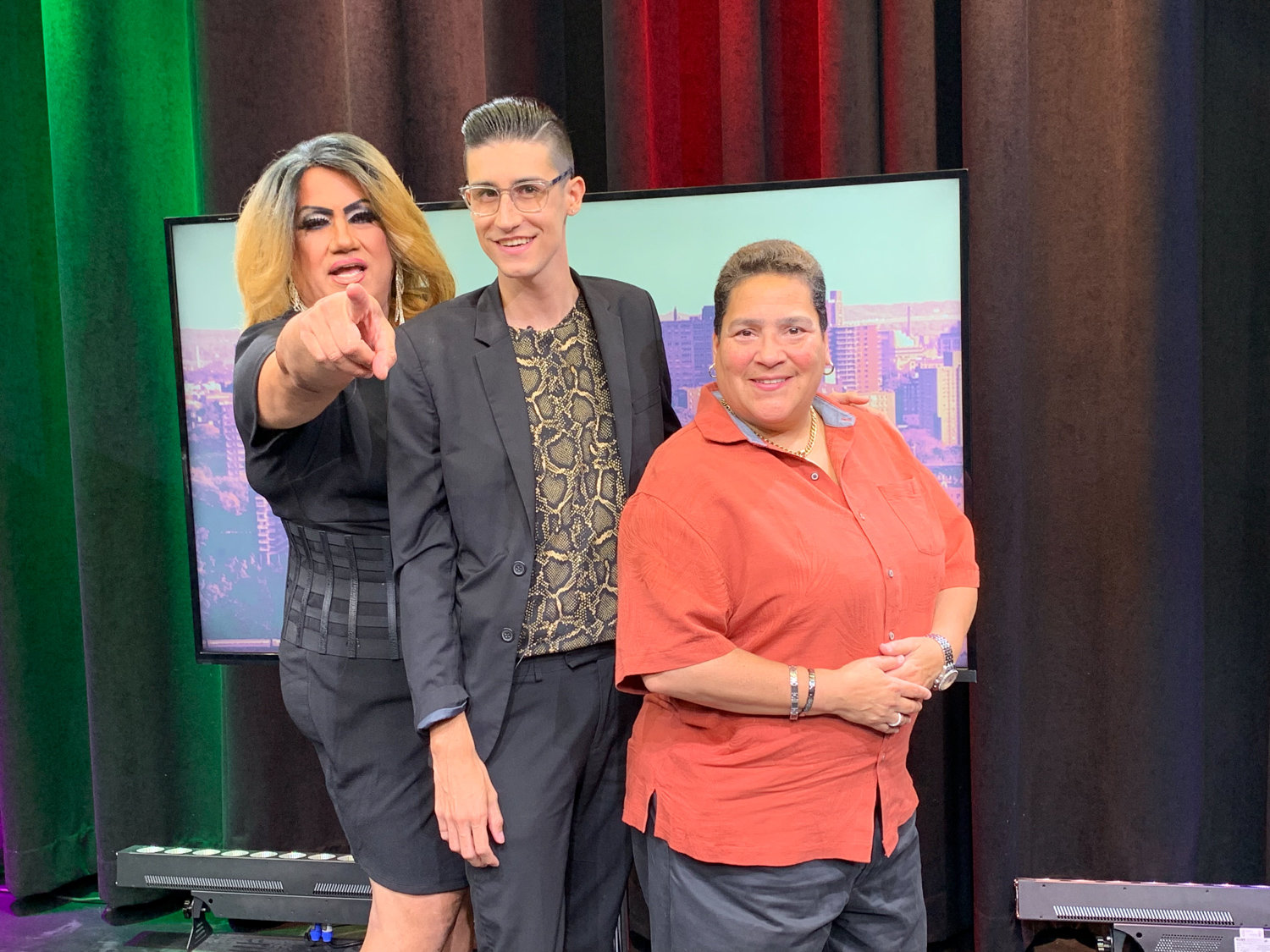 ‘Out Loud’ host Anthony Parker, center, stands with local personality Apollonia Cruz, left, better known as ‘Queen of the Bronx,’ as well as Audrey DeJesus, right, an entrepreneur who hopes to open a gay bar in the borough.
Courtesy of Anthony Parker 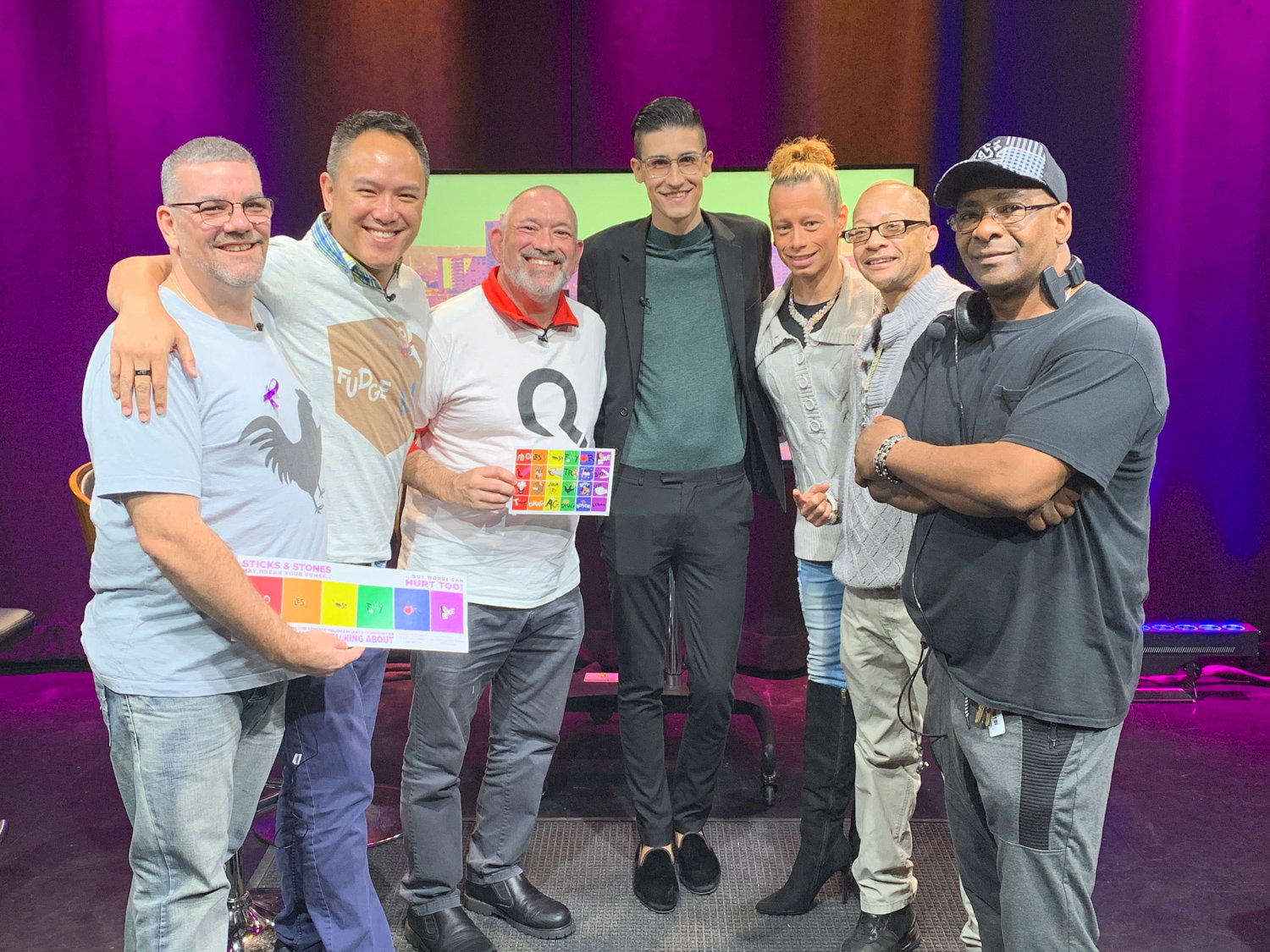 James Young, Geoff Peckman and Jeff Gurkin-Young of Queery, an LGBTQ education group, stands across from Sabastian Roy and Lailani Muniz of the New York Transgender Bodybuilding Federation with ‘Out Loud’ television host Anthony Parker right in the middle.
Courtesy of Anthony Parker
Previous Next
By RAPHAEL LASSAUZE

The tale of the LGBTQ community in the Bronx is a long and messy string of accounts and histories, lost bars, and new cafes which, when approached, seem to disappear. Navigating the terrains of myth and legend and embellished fact for those who are trying to determine a place for themselves in the world, for queers who search for representation, it is a hard road — a matter of hearsay and imagination.

Anthony Parker wanted to change that.

He originally studied journalism courses at  Pace University, but switched to film, finding a job soon after graduation. When he moved to Spuyten Duyvil in 2018 with his boyfriend, Parker noticed something was missing.

“I wondered where all the other queers were, as there were so many outlets in Manhattan, and I felt almost isolated,” he said. “Then I saw a billboard for BronxNet and thought, ‘I can do something about this.’”

BronxNet is a public access cable channel with studios located in different parts of the Bronx, including one on the Lehman College campus. Getting a program does take a little work, however, including attending a series of classes — one of which, according to Parker, required him to formulate the show while learning production details.

“I wanted to do something for the greater good,” Parker said. “So I thought of a classic interview-style show where I spotlight queer folk from around the borough. I wanted to make a show that helped the community.”

There were some good teachers leading these classes, Parker said, and he learned quickly, especially for anyone who doesn’t really have a sense of what goes into a television production.

But not all of it was easy.

“The only thing that made me nervous, at first, was putting myself in the spotlight, there on the camera,” he said.

That stage fright, however, had nothing to do with Parker being an out gay man. If anything, his pride assisted him in the execution of the show, helping him interact smoothly with the numerous personalities he’s invited to sit across from him in the show he ultimately called “Out Loud.”

“I make sure my guests are comfortable,” Parker said. “I always say, ‘Forget the cameras as much as you can, and let’s just talk.’ A lot of the time, a theme organically manifests itself in the segment, and I think that happens because my whole goal is just to tell people’s stories. That’s why it’s called ‘Out Loud.’”

And the stories that have graced Parker’s set are extensive and layered, from the directors of the Bronx Academy of the Arts and Dance Charles Rice-Gonzalez and Arthur Aviles, to the “Queen of the Bronx” herself Apollonia Cruz, to everyday people like Audrey DeJesus, who just wants to open a gay bar that actually stays open in the Bronx.

But one interviewee stood out in Parker’s mind the most.

“I grew up in Westchester,” Parker said. “There weren’t any big queer events or stuff going on, the bars would close quickly, there wasn’t a lot of community. I was so excited to have Queery on the show because they’re based in Westchester, but also because they do what I try to do with my show: to normalize queerness.”

Queery describes itself as an art-based violence prevention educational program led by James Young, Geoff Peckman and Jeff Gurkin-Young. They joined Parker for a discussion about the ways to educate and inform the general public about the different kinds of queerness and how people express it. While Queery often uses provocative artwork in order to elicit reactions, Parker hopes to continue “Out Loud” in order to do almost the opposite.

“I really like to think that there’s a little kid watching my show,” Parker said. “And they’re just looking at the people I’m speaking to and think, ‘Hey, that’s me. That’s what I feel like I look like, or sound like, am like.’ I want to make sure that anyone watching could see these kinds of queer people and not think something reactionary or negative, and just see them as interesting people.”

By creating the show, Parker has done his best to provide a platform for those in the community to be seen by all, not just on television, but also on his website OutLoudTalk.com. There archived episodes and previews grace its pages.

“I wanted a place where people could find a good record of all the fabulous people I’ve spoken with,” Parker said. “It’s exciting. This show is so important to me, and I want it to keep growing.

“I’m trying to cast the light on everyone on all the different kinds of diverse people in the LGBTQ community, and for them to have a place on my show where people can see them is so rewarding to me.”