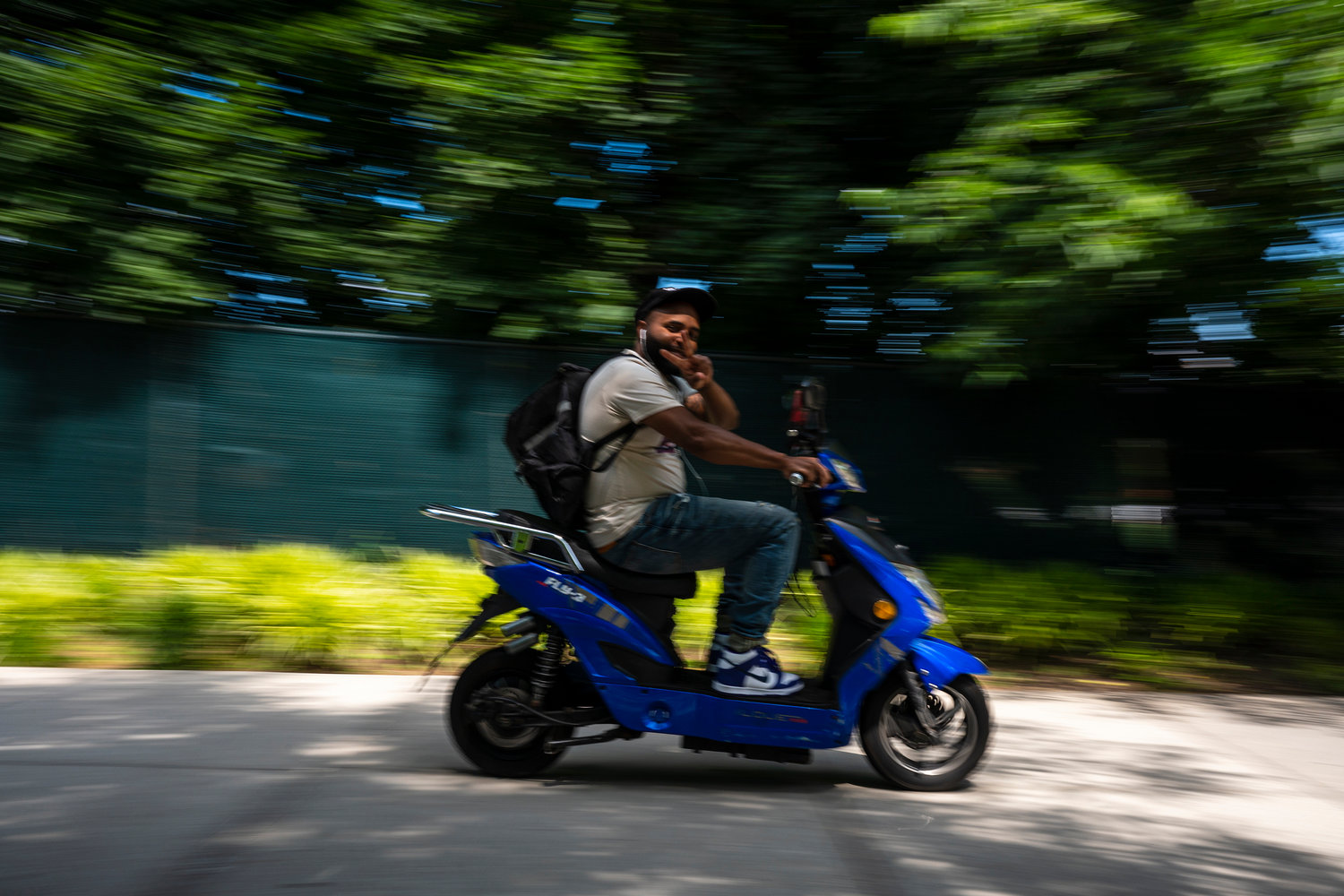 These scooters have been flocking around Riverdale near Manhattan College, mainly best by couriers because delivering meals. A driver must have a driver’s license and registration to operate.
Hiram Alejandro Durán 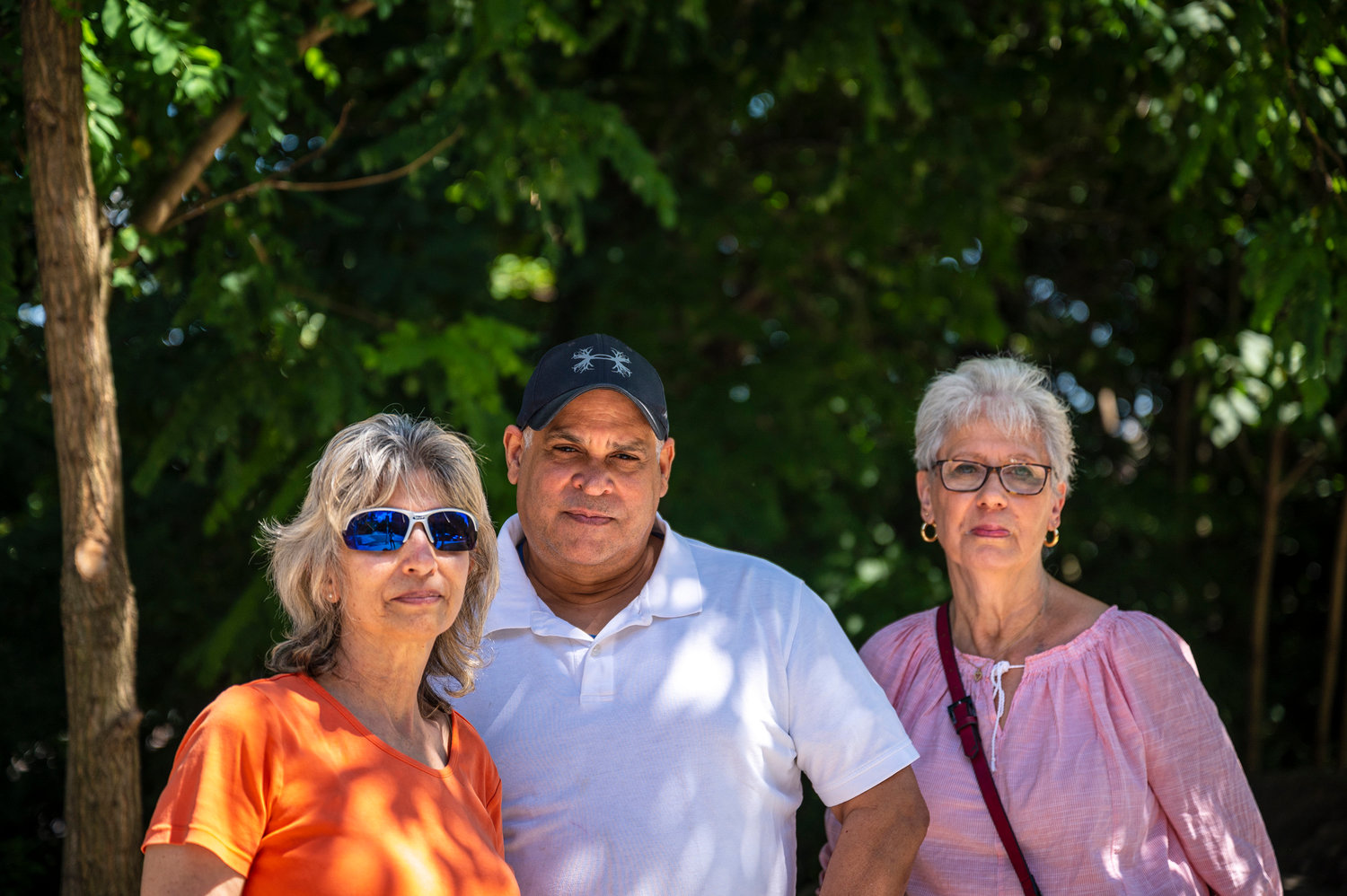 Joan Kaufman, president of the board of Waldo Gardens, left, has done everything in her power to help and secure the safety of her community. She doesn’t want to wait for an accident to happen for the city to implement new signs and rules against the scooters. Rafael Batista, a superintendent, and Annette Douglass, a resident, who watches out for the dangerous traffic, look on.
Hiram Alejandro Durán
Previous Next

It’s safer than driving on Broadway. A lot of our streets have no bike paths, but it means this relatively narrow path that’s meant for recreational walks is being used for mopeds.”
MARGARET GROARKE Manhattan College professor
By Stacy Driks

Imagine a place where bicyclists, walkers, and runners can feel safe walking down a recreational path — for a safe commute in Riverdale.

Around a decade ago, there was such a place called the East Coast Greenway, an urban Appalachian trail that goes from Maine to Florida. According to Joan Kaufman, resident of 3800 Waldo Gardens, this trail was not paved.

Once Manhattan College built Kelly Commons eight years ago, there was an agreement between the college and the Greenway alliance to co-exist. It was done to connect people for a recreational site — to get people from one side of the country to another.

The nonprofit East Coast Greenway Alliance created a trail network. It was followed by Empire State Trails, an initiative of former Gov. Andrew Cuomo in 2017 that was completed by 2020.

But during and after COVID-19 the trail’s use has changed.

“The question is about motorized vehicles — that is another question,” said Dart Westphal, environmental studies professor at Manhattan College. The focus was on prohibiting internal combustion engines — no motorcycles, etc.

“Riding an e-bike on the Greenway is generally acceptable as long as cyclists don’t speed and follow all the customary rules of trail etiquette such as passing others safely,” Westphal added.

The picturesque short path in front of Kelly Commons has interrupted the trail’s initial purpose. Kaufman and the Waldo Gardens building board are worried about the easy access for couriers on the path who speed.

“I haven’t been here that long, but, they (mopeds) can get really close,” said Jonathan Diaz.

Diaz is a Manhattan College freshman who has witnessed multiple incidents of mopeds zipping past him.

A moped can go as fast as a moving car, up to 30 miles per hour, which could injure pedestrians. According to the state motor vehicle department, mopeds from classes A, B and C are only allowed to travel on vehicle lanes, and some must only travel on the right-hand side.

“It’s safer than driving on Broadway,” said Margaret Groarke, a political science professor at Manhattan College. “A lot of our streets have no bike paths, but it means this relatively narrow path that’s meant for recreational walks is being used for mopeds.”

“If you want to order something, how is a delivery person supposed to get there? They got to come up this roadway,” Groarke said.

Groarke and Kaufman have either experienced or know someone who has experienced the trauma of being in an accident involving a vehicle.

“We order food from them,” Groarke said about the moped drivers. “Do you want them to have a safe way to get to your house? I don’t want them killed delivering my dinner.”

Although Waldo Gardens board members want a co-existence between pedestrians and moped drivers, Kaufman feels it is impossible without restrictions.

“This letter is regarding an ongoing discussion my office has been having with the Bronx DOT regarding a request for signage,” Assemblyman Jeffrey Dinowitz said in a letter sent to Keith Kalb, Bronx interim DOT commissioner.

Kaufman brought the attention to the Assemblyman’s office during the summer break since the college allegedly did not respond to her requests.

Meanwhile, the DOT denied Dinowitz’s request because the agency doesn’t have an existing sign restricting mopeds from entering its streets.

“Based on the analysis of the data collected, it is our judgment that a signal or an All-Way stop sign will not provide the maximum safety benefits to address the concerns that you (building management) reported,” said Kalb.

This email gave no hope to the residents who once enjoyed walking down this pathway. They claim if the college complains or gets involved, its jurisdiction has more power than its words.

Since the fall session for Manhattan College has begun and more students are walking on campus, it gets tricky for the drivers to weave around the students.

The Riverdale Press witnessed two motorists driving parallel southbound, taking up about a third of the path. Once stopped, the driver admitted that the route was easier for them to travel down and that they were going reasonably slow.

Alex Rodriguez,  a sophomore, walks around with his AirPods all the time while coming down this pathway. He believes that the drivers are successfully traveling at a low-speed.

“They are probably more aware than I am,” Rodriguez said. “I’m from the Bronx, and I’ve experienced speeding drivers, but I think they are being careful.”

As students text, chat or read while walking in a crowd, it is not as easy to see  a vehicle storming behind them.

“Manhattan College Facilities and Public Safety, in partnership with the 50th Precinct, will investigate and come up with a practical solution that ensures everyone’s safety,” said David Koeppel, director of media relations and strategic communications.