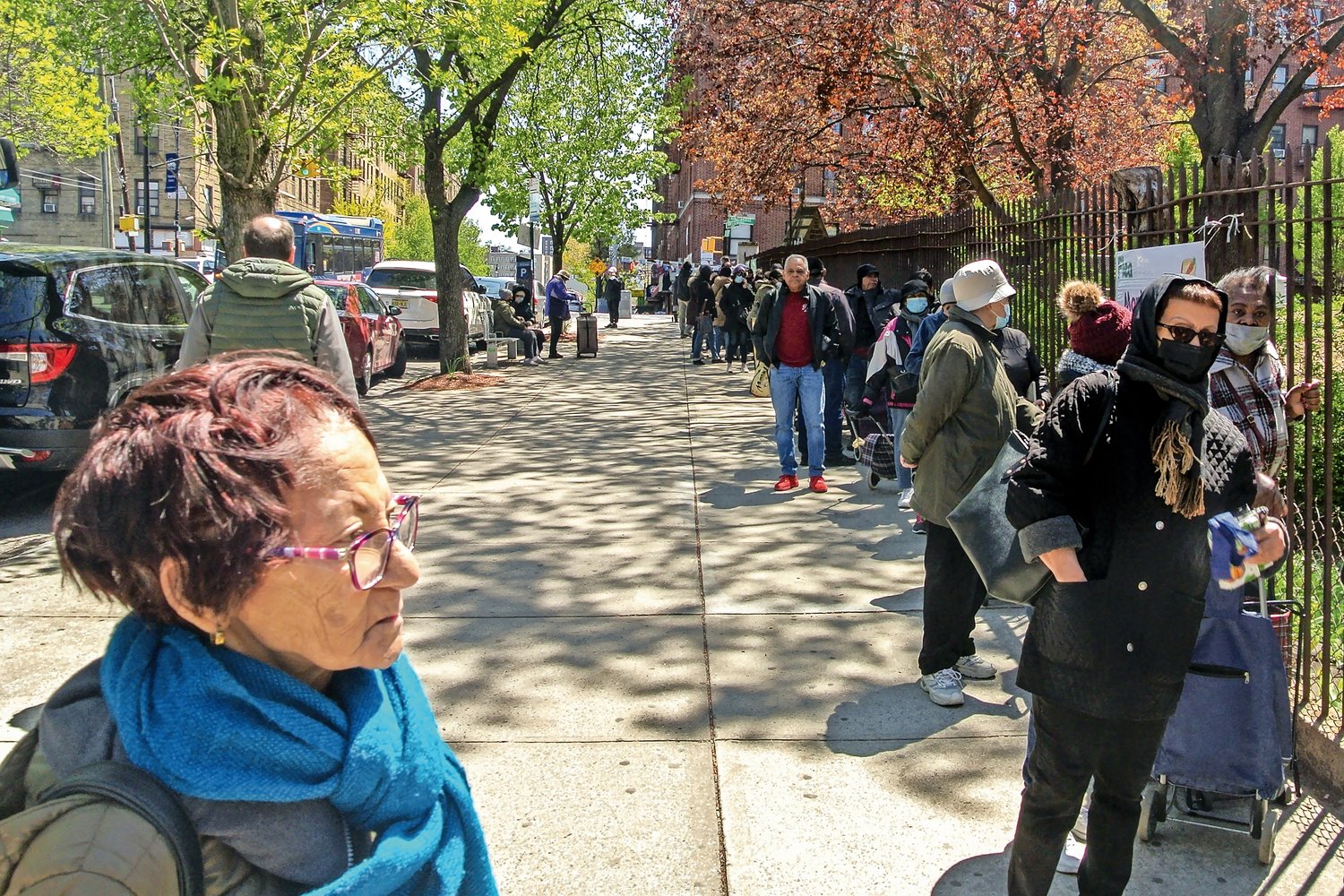 On a Friday afternoon in late April, Kingsbridge residents wait for hours outside a food pantry organized by The Church of the Mediator. In the past couple of months, the lines have grown longer and longer, organizers say.
SACHI McCLENDON 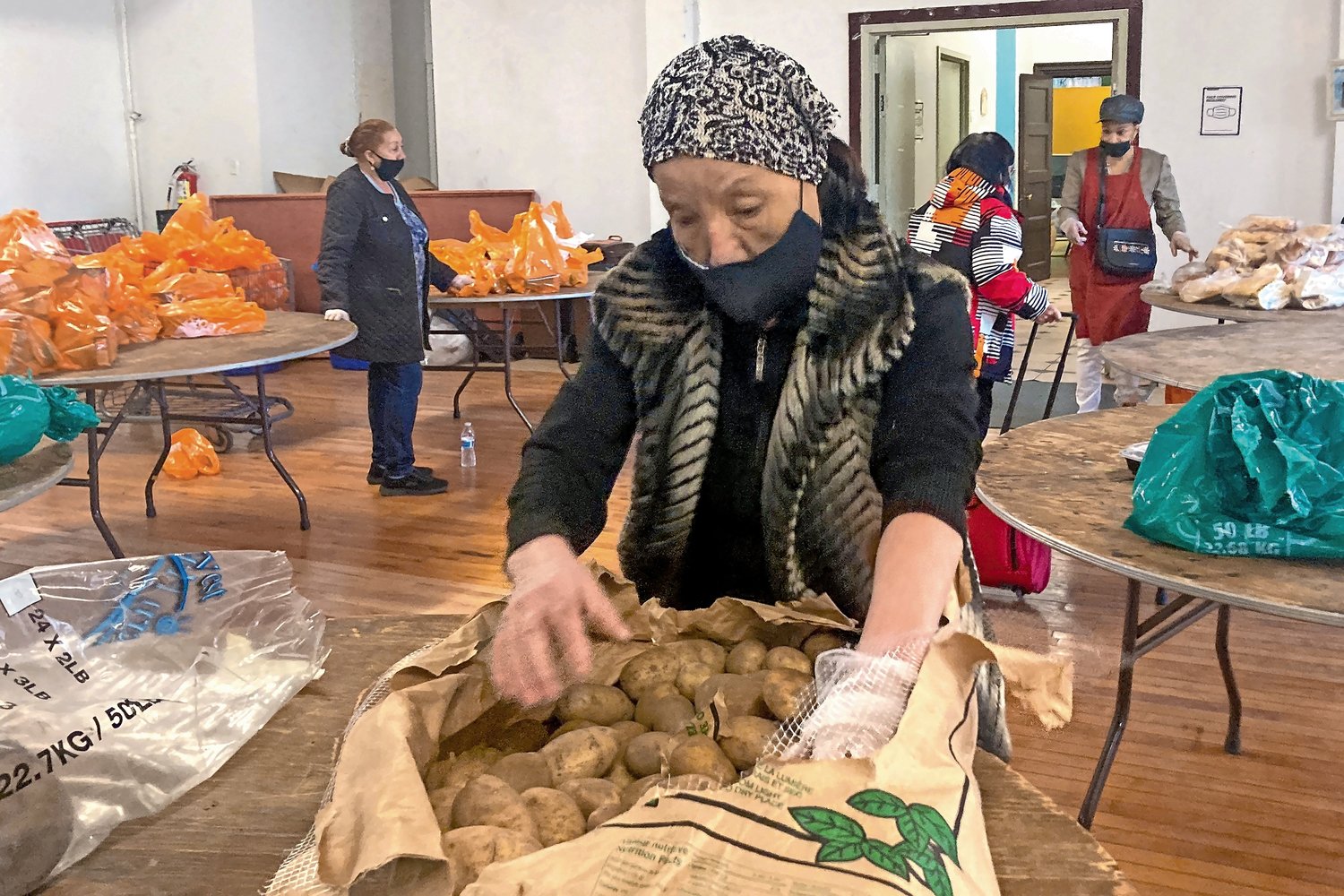 Organizers at the Church of the Mediator work all day to help provide hundreds of Kingsbridge residents the food they will need for the week.
SACHI McCLENDON
Previous Next

Some people volunteer and they want food. I cannot put people to work and not give them’ anything.”
SOBEYRA ALMONTE, pantry director
By SACHI McCLENDON

For the past month, Floribel Mitchell has been coming to the Episcopal Church of the Mediator on West 231st Street in Kingsbridge to get her weekly groceries. The mother of three has struggled to make ends meet ever since her husband died almost four years ago.

“When my husband passed away, my little girl was only two months old,” she said.

While Mitchell said she hasn’t always gone to a food pantry, the recent increase in prices at the supermarket has driven her to find other ways to feed her three kids.

So Mitchell, who lives just down the road on West 230th Street and Broadway, spent a large chunk of her day just getting groceries. She told The Riverdale Press she had to wait over two hours in line outside the pantry to get her food.

And she’s not alone. Hundreds of residents waited for hours on a Friday in late April to get their groceries. Father Luis Gomez, the head of the church, says the lines have been growing longer in the past couple of months, and his pantry is struggling to provide everyone who comes with enough food.

“Everything is so expensive. Especially in this area, you find out that it’s more expensive than even Park Slope. Everything. Food. Groceries. Everything. In Park Slope, I pay for a lunch: $11,” said Gomez, a Park Slope resident. “Here, $16. That’s expensive.”

Gomez attributes the spike in turnout to the rising cost of groceries at the supermarket. A buck isn’t going as far as it used to, he said. “Their money that they have now is not enough, because everything is going up (in price). That is a problem.”

Every Friday, the church turns into a pantry from 9 a.m. to 3 p.m.  By the end of the day, Gomez said he’s sometimes forced to turn away those left in line.

Gomez said the high turnout continued even after the pantry began only serving those who lived in the church’s zip code. “People would come in from Brooklyn or Queens to get food,” he said.

Even with these new rules, Gomez said he’s still had to turn people down. “I have to say, I’m sorry, we cannot give you anything,” he said. “You have to look for another pantry.”

It was all hands on deck on April 29. Volunteers ushered participants through the gate, two at a time, in an effort to limit the spread of COVID-19. A separate group of volunteers checked IDs to ensure they are area residents. Others handed out the orange plastic bags filled with canned chicken, packets of oatmeal, bags of navy and black beans, grits, peanut butter and green beans — a whole week’s worth of supplies.

Yet, the only fresh produce in sight were cabbages and potatoes. Meaja Hawkins, 80, who has been helping out at the pantry for several years, said there’s usually a much larger variety of a fresh vegetable, but that there was a logistical mix-up threw things out of sorts. “Onions, garlic, different types of tomatoes,” is usually what’s up for grabs, Hawkins said.

Sobeyra Almonte, who is the director of the pantry, was running around all day trying to keep the whole operation running smoothly. “Not everything is peaches and cream in a pantry,” she said.

Almonte said that some of those waiting in line had been shouting at the volunteers trying to get inside the church’s doors, thinking that they were residents trying to jump the line. “So they feel like they are cutting the line,” she said, adding that a number of the volunteers do need the food themselves.

“Some people volunteer, and they want to get food,” she said. “I cannot put people to work and not give them” anything.

Almonte said that the church sources much of its food from the Food Bank for New York City, but that she also sometimes received food from other nonprofit organizations, like 9 Million Reasons. Even still, “We are kind of short on food,” she said.

And when the food runs out, Father Gomez said he directs people to other pantries in the area like the Kingsbridge Heights Community Center.

Caesar Tobar-Acosta, who is the director of the food pantry at Kingsbridge Heights Community Center, says they are serving more than 400 people over the two days every week the pantry is open.

“We’ve been seeing like a more steady increase on my side,” they said. “Throughout the pandemic, the list of things I’ve seen was grocery prices being one of the big factors” for the spike in turnout.

In addition to the increase in grocery prices, Tobar-Acosta said that more people are showing up now that they are no longer afraid of contracting COVID-19. “People are actually more able to come back outside now,” they said.

Whatever the cause of the growing numbers, Tobar-Acosta said their pantry will continue to try and provide for everyone that shows up at their door, no matter what it takes.