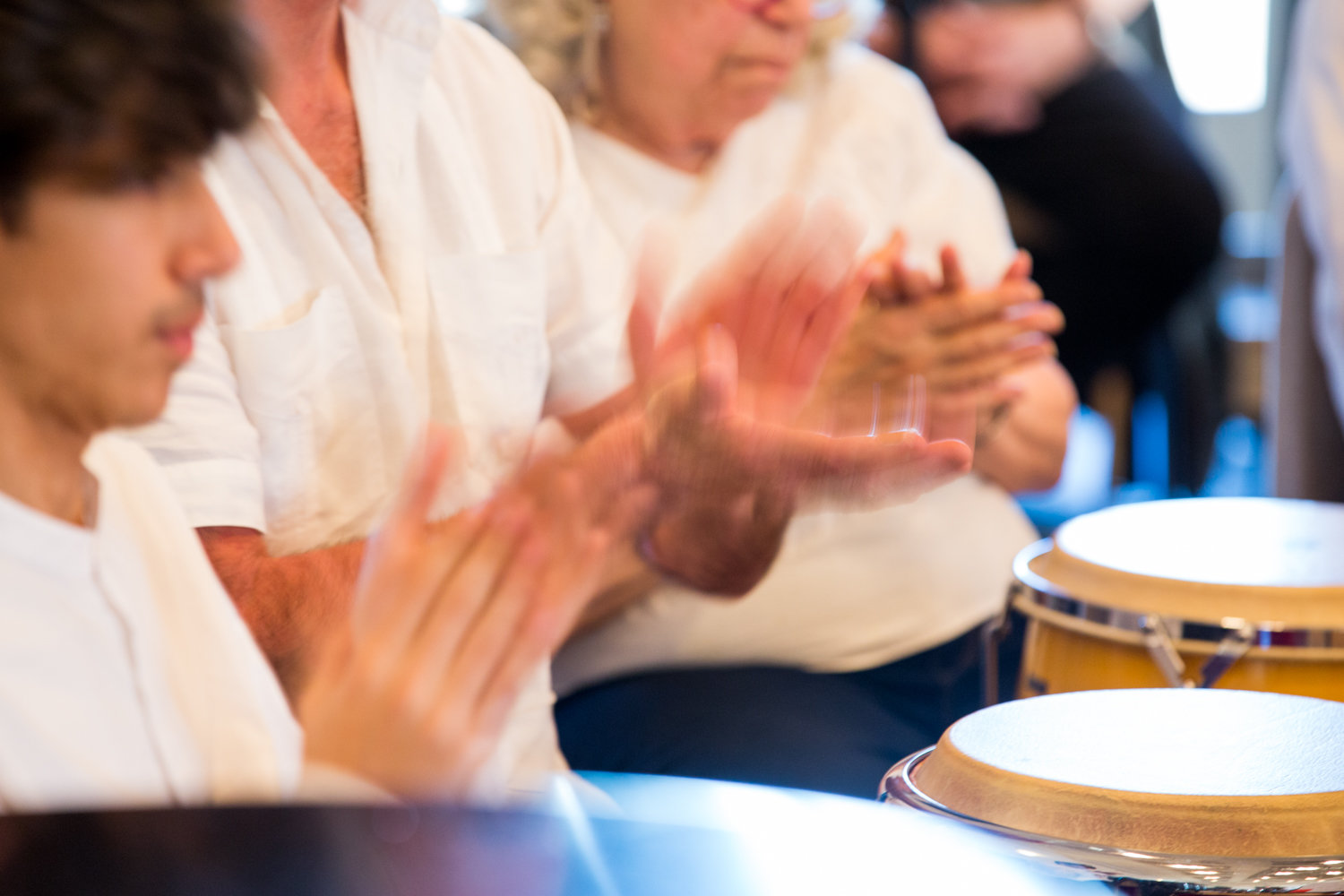 Members of the Lehman College Percussion Ensemble play a piece solely using their hands during a Nov. 21 performance for the school’s jazz festival.
JULIUS CONSTANTINE MOTAL 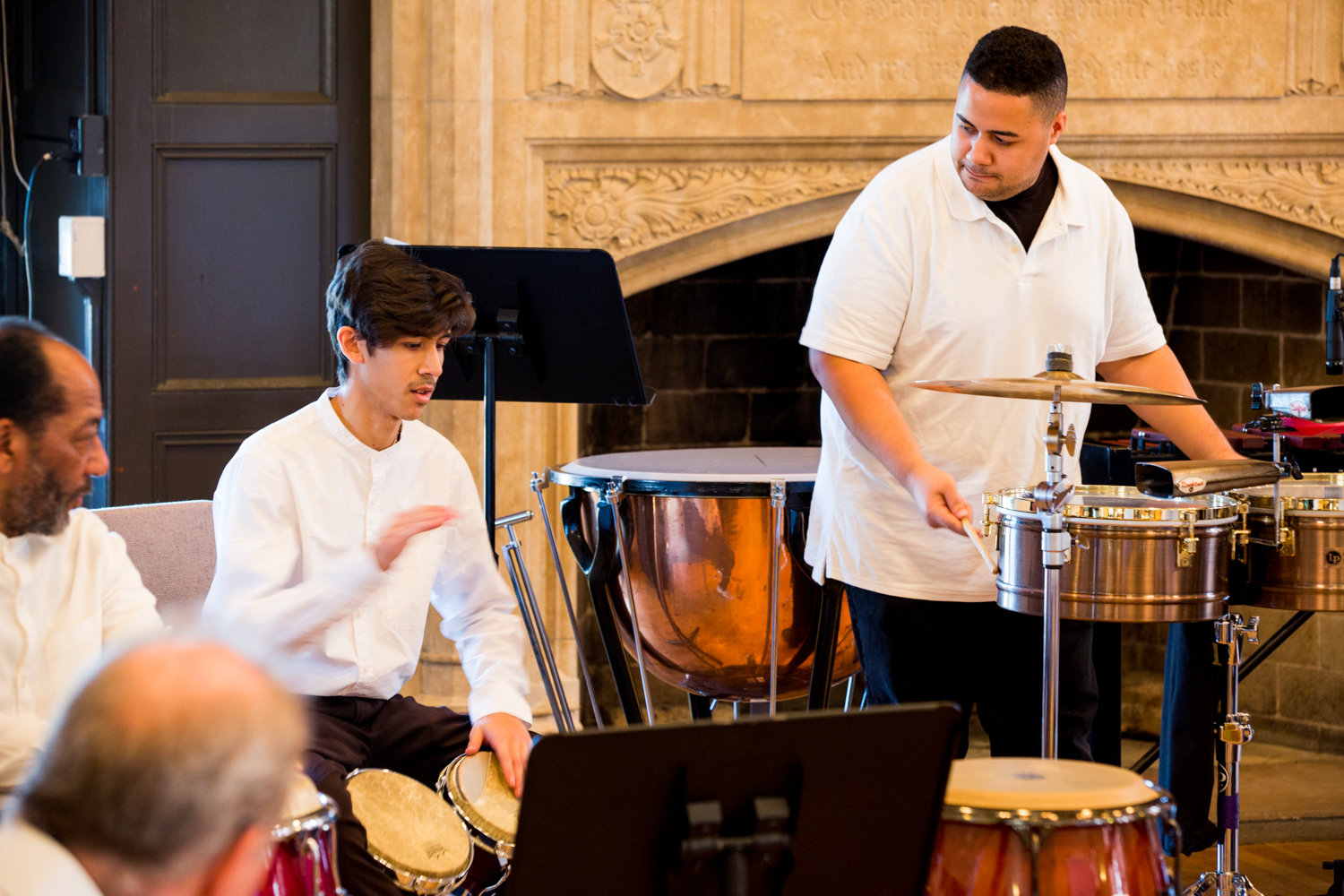 Carlos Colon, right, and Adam Baksh play a song they composed within a 48-hour timeframe prior to their Nov. 21 performance with the Lehman College Percussion Ensemble during the school’s jazz festival.
JULIUS CONSTANTINE MOTAL 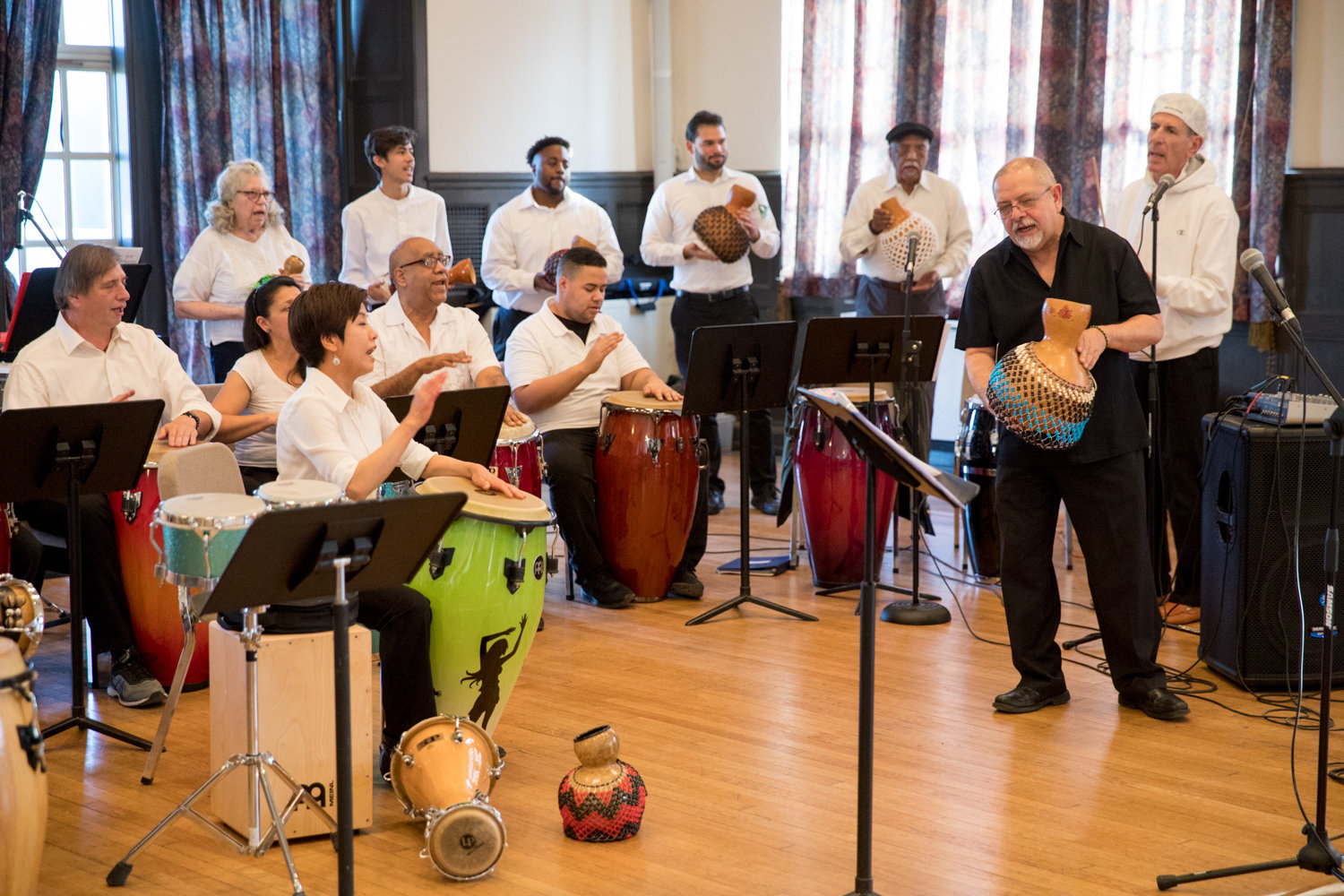 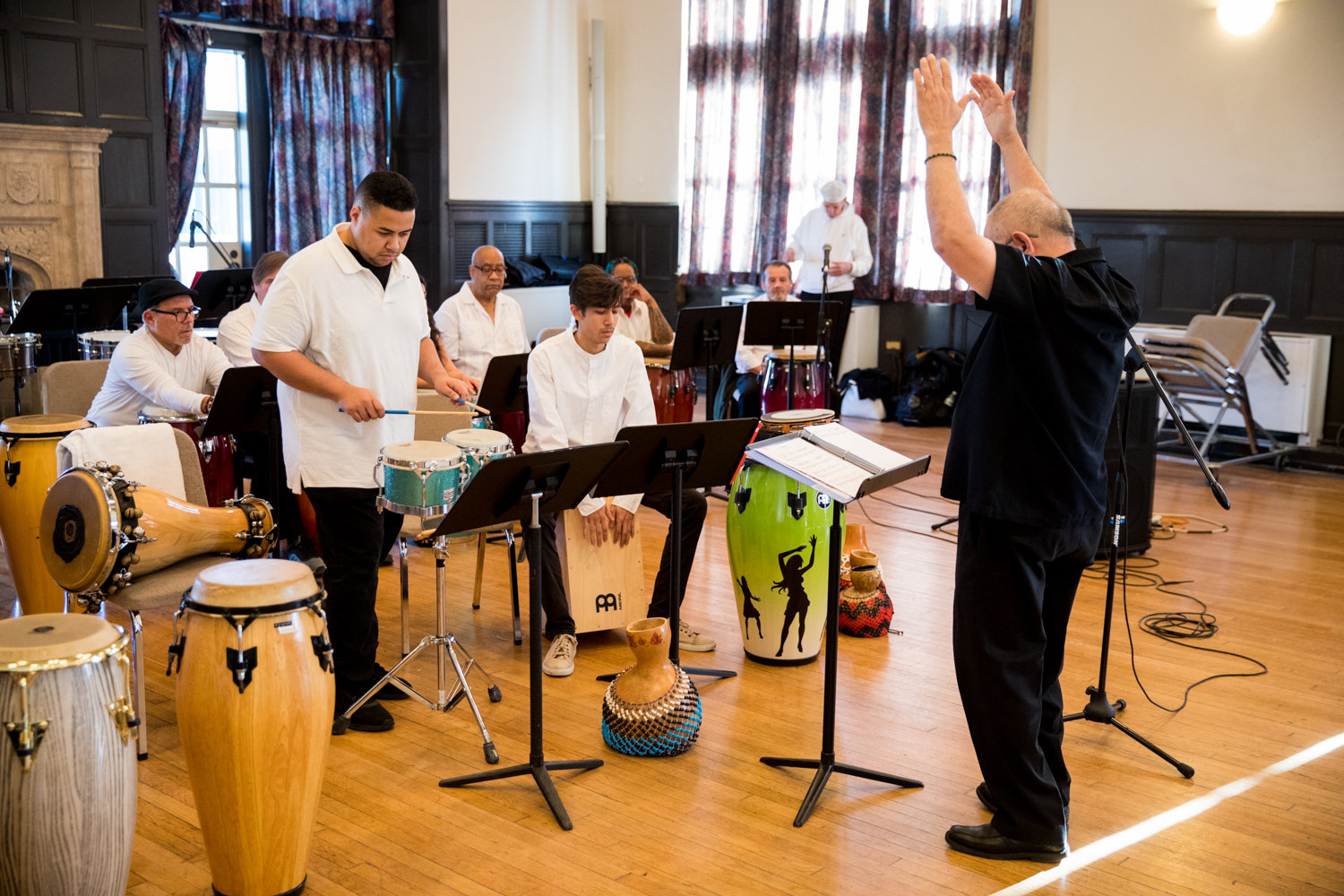 Victor Rendón conducts a piece performed by Carlos Colon, left, and Adam Baksh during a Nov. 21 concert by the Lehman College Percussion Ensemble as part of the school’s jazz festival.
JULIUS CONSTANTINE MOTAL 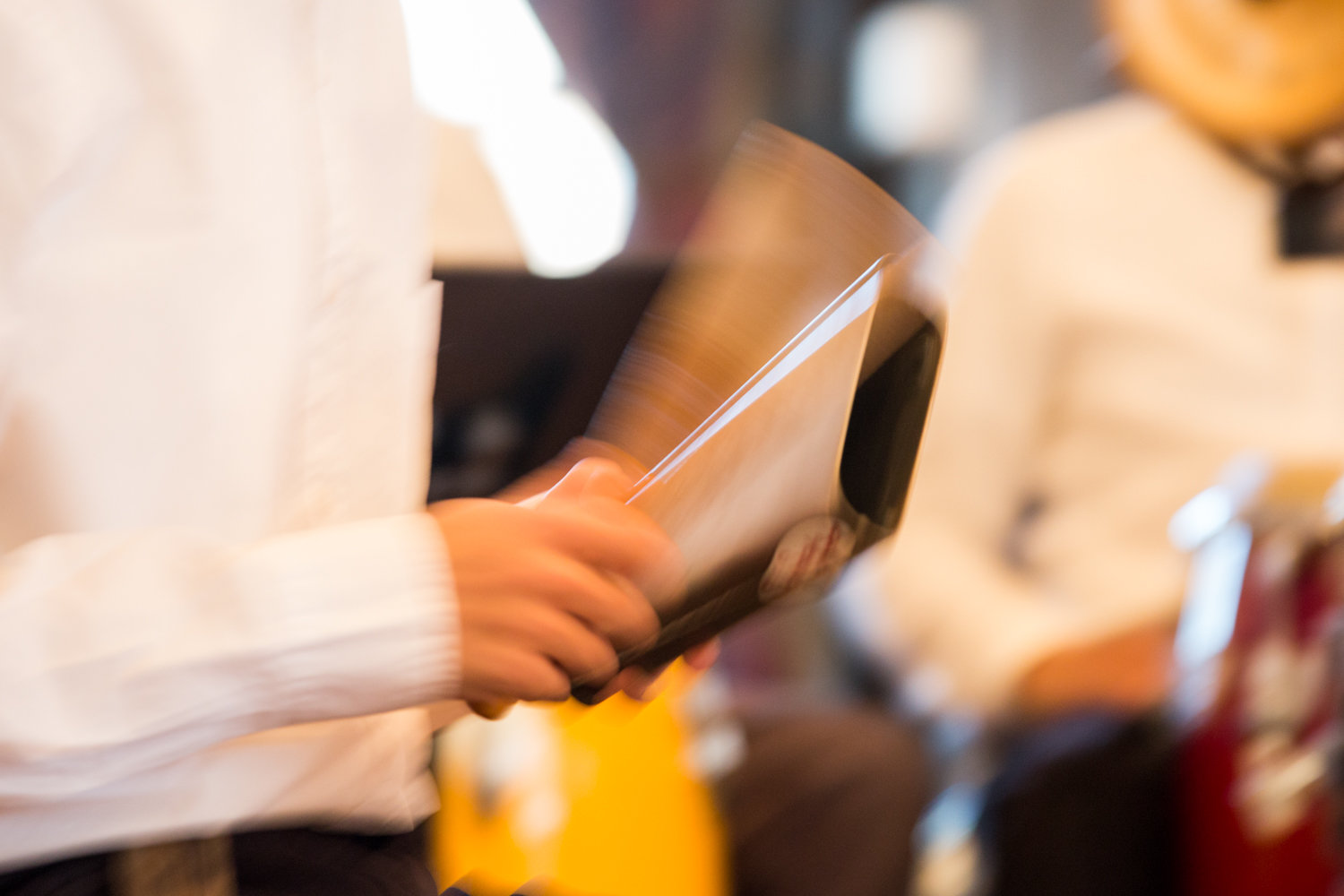 Adam Baksh plays the cowbell during a Nov. 21 performance with the Lehman College Percussion Ensemble as part of the school’s jazz festival.
JULIUS CONSTANTINE MOTAL
Previous Next
By RAPHAEL LASSAUZE

The conductor stood in all black before the white-shirted sea of student ensemble percussionists.

From the first motion of the director’s fist, the Hearth Room at Lehman College was filled with a frenetic yet carefully balanced and coordinated wave of excited Latin music. As they played, the director stood to the side, his head bent, evaluating the performance of his musicians.

The first song — “Mon Ti” by the immortal Tito Puente — ended, and the look the conductor gave his students was expectant, yet radiated the excitement of the music they’d just played. The audience applauded.

That director is Victor Rendón, a musician, recording artist and conductor for the Lehman College Percussion Ensemble. He worked for years as a recording musician for and with acts like the Latin Jazz Coalition, Café Salsa, and the New Xavier Cugat Orchestra.

Since Rendón inherited the percussion class in 2013, he’s carried it down a path separate — although not divorced — from classical music.

“I reshaped the class into one that was centered on Latin, jazz, and Caribbean music,” Rendón said. “It’s given students a challenge, but also an opportunity. You learn classical first. Then, when we play, it’s something different every time.”

The class is an open one, not restricted to age. Due to the college’s encore program, several members are over 30, although that’s not a problem for the quality of the music.

“Some here are semi-pro,” Rendón said. “They’re all quite good, pro or not.”

The ensemble performed a great variety of music, ranging from Puerto Rican folk music to traditional Cuban pieces known as “Bembes” — a praise-song using drums, bells, shekeres and singing — and Guaguanco, a sub-genre of rumba.

Another composition by Rendón, “Palmadas para Aztlan,” uses rhythmic and intricately timed clapping to invoke the spirit of the mythical Aztec homeland, known as Aztlan or Mexica.

“I want to keep it in this direction,” Rendón said. “I think they’ll all appreciate it, though the younger ones may benefit the most.”

The second-to-last piece was titled only “Percussion JamAd-Lib” by two students in the orchestra, freshman Adam Baksh and senior Carlos Colon. Rendón turned to the audience and announced the two would perform a composition created just 48 hours before.

Looking to his two students, frantically arranging their instruments, Rendón asked if their piece was titled. Baksh and Colon looked at Rendón with blank expressions, and just as Rendón turned away to let the two young musicians flounder under the eye of his scrutiny, Baksh blurted out a name: “48 Hours.”

The audience laughed. And then the duo began.

At Baksh’s knees, the bongos produced the sound of a thousand momentous stones falling down a mountainside, while Colon’s rapid-fire assault upon the metallic timbales was its own rhythmic cascade, made faster and louder by the use of “cascara,” or hitting the side of the drums with drumsticks.

The eyes of the audience were glued to the hands and looks of determination and subtle communication between the two young musicians. And then David Deliz, one of the senior drummers, joined them. His addition to what had now become a trio was a raucous and balanced event of excited joy.

The audience responded to that particular performance with a standing ovation.

“We were given 48 hours,” said Baksh following the concert, his nervous smile making the ends of his lips twitch. “But we actually had a little less.”

Baksh made it clear that Deliz’s entrance into the piece was entirely unexpected, and the actual composition was rehearsed only once earlier that day.

“But we learned a lot of this and got better at it thanks to Rendón,” Baksh said. “Knowing I can do this makes me and Carlos think about going pro.”

Colon is a musician by day and postal employee by night, but wouldn’t mind making one of those professions his lifelong career.

“It’s hard to balance both,” Colon said. “But I trust the people I work with here, especially Adam. He’s my best friend, and when you have someone to improvise with, it’s great. Making music with people like that, it’s about joy.”

That swell of students itching to learn music that gives them joy from the roots of their culture or others reflects what Rendón hoped to do from the start.

“Here, in the Bronx, we have a large Latin community,” Rendón said. “With these concerts, it’s a little way to give back. They feel proud of what they hear.”