Phyllis Davies, who made quite a lot out of a little, 91 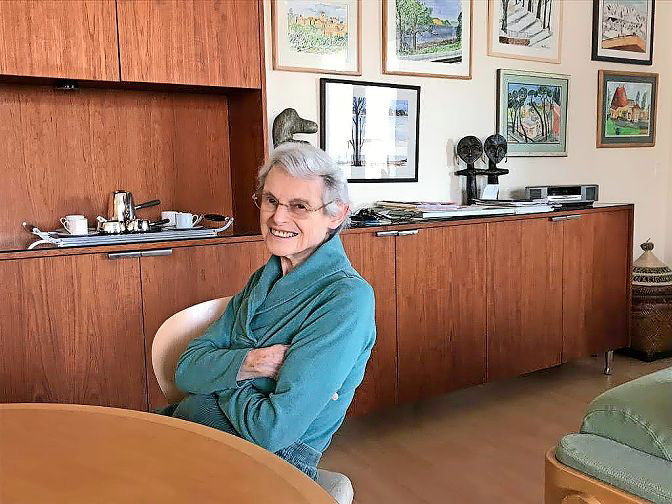 Phyllis Davies, who died Aug. 27, 2020, in Sleepy Hollow, was remembered by family and friends as a gentle, loving soul who always seemed to be the “smartest person in the room.”

Yet, after winning academic scholarships to prestigious elementary and high schools in New York City, it was her talent as a harpist that captured the interest of Radcliffe College. The admissions department’s hope that she would join the Harvard-Radcliffe orchestra is what induced the school to recruit her.

Although she remained a music lover throughout her 91-year life, she made her mark in the world as a pioneer in the field of computer programming, and as an attorney specializing in city tax matters.

And she traveled the world with her husband Peter — who preceded her in death by five months — as his career took him to distant climes like India, Thailand and Brazil.

Her parents, Benjamin and Frieda Botner, were immigrants from Austria and Russia who raised her Harlem and on the Upper West Side. She shared a bedroom with her maternal grandmother throughout her childhood and teenage years.

Benjamin had not been to college, but he studied law at night at New York Law School while selling insurance by day for Metropolitan Life in Long Island City, Queens.

Later in life — after retiring at 65 — he found what he called his “true calling” as an attorney representing indigent inmates at Rikers Island for the Vera Institute of Justice.

It was Benjamin’s career path that inspired her to pursue a law degree of her own, after returning to Riverdale from Brazil in 1971.

As the daughter of parents committed to the education of their only child, she commuted to Greenwich Village for elementary school at the Little Red Schoolhouse, transferring to the Dalton School further uptown for high school.

While still at Dalton, she crashed an Upper East Side New Year’s Eve party and met another party crasher, a dashing young man in a Merchant Marine uniform named Peter Davies. They were immediately attracted, but Peter was obligated to sail the seas for the next six months.

Family lore has it that Peter wrote to her every day until his return, and the couple was married between her junior and senior years at Radcliffe.

After spending Summer 1950 with a group of international socialists on a kibbutz in the new state of Israel, the couple settled first in Boston, and then in Greenwich Village, before ending up in Rego Park, Queens.

They moved to Riverdale in 1953 and maintained a residence there for more than 52 years, although they rented out the home they built in 1956 on Ladd Road for nine of those years during Peter’s assignments abroad.

At one point, the house became the residence of the Ghanaian ambassador to the United Nations, and was used for frequent receptions and parties that were written up in The New York Times.

Although raising two young boys, Ken and Chris, she made the time to go back to school to study computer programming in the 1950s, becoming one of the first to master machine language and Fortran. Her expertise earned her top secret security clearance and a job creating a database of everything the U.S. Navy owned, “from missiles to Band-Aids.”

When Peter was posted to Thailand in 1966, she worked for IBM as a computer programmer for the Asian Games, hosted in Bangkok. But after three years in Brazil — where Peter was working with the U.S. Agency for International Development — she decided she wanted to be closer to her children — who were living in a dormitory at Riverdale Country School — and to her parents in New York.

Returning to Riverdale in 1971, she enrolled in New York University Law School. When she graduated, she took up a post as the legislative counsel for a young northwest Bronx Assemblyman, Oliver Koppell.

“She was a capable progressive Democrat and a good friend,” Koppell said, last week. “Very intelligent and knowledgeable about New York government.”

Eventually, she was hired first by the city’s finance commissioner, and then by a woman she considered a mentor and friend, Betty Mann, the city’s tax commissioner.

That independent agency was charged with reviewing the protests of the city’s property taxpayers. Although many had small holdings, sometimes she handled the appeals of celebrities, like the Rev. Sun Myung Moon, and of course, Donald Trump. She remembered Trump’s organization as “belligerent and difficult.”

She finished her career as an attorney in the office of the city’s corporation counsel, retiring at 62 in 1991.

In 2005, the couple were among the first to move into Kendal on Hudson, a retirement community in Sleepy Hollow.

She regularly volunteered in the Riverdale community, especially as an early and active member of the Benjamin Franklin Reform Democratic Club. When the management at Skyview-on-the-Hudson attempted to bar a Black family from moving in, she was among the neighbors who successfully picketed to end the discrimination.

She was involved in the Riverdale chapter of the United Nations Association, and an avid supporter of the Bronx Arts Ensemble, hosting recitals at her home.

She is survived by a far-flung family including Kenneth and his wife Margrethe Juncker, living in Jinja, Uganda, and their children Benjamin Davies in Alexandria, Virginia; Daniel Davies in Bangkok; Lukas Davies in Chicago; Emma Davies in Skokie, Illinois; and Johannes Davies in Cairo.

Christopher and his wife Carina Borsch live in Logan, Utah, and they have a son Simon Davies in Albany. Borsch’s daughter by a previous marriage — Britt Pomusch of Olympia, Washington — considered Phyllis to be her “grandma.”

She also is survived by two step-great-granddaughters, Maya Titof of Logan, and Svea Titof of Olympia.

The family asks that friends wishing to make donations in Phyllis’ name contribute to Friends of Reach Out Africa, for which Phyllis was treasurer.

It can be reached at FriendsOfReachOut.org.