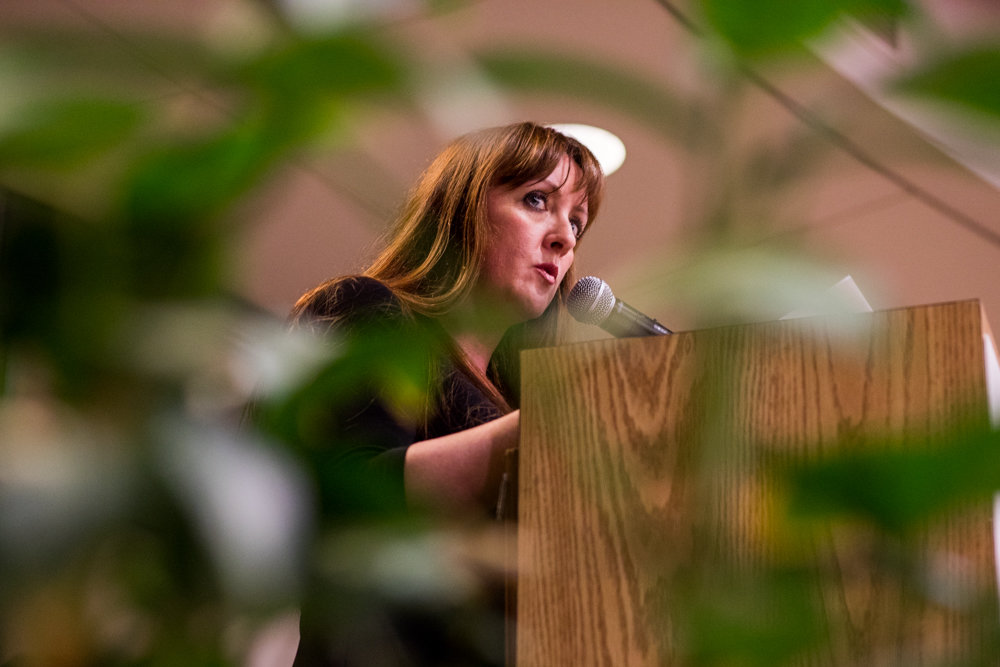 Deborah Kahan Kolb reads her poem 'Brandenburg Gate' during 'Write Me,' a poetry event in remembrance of the Holocaust at the Hebrew Home at Riverdale.
JULIUS CONSTANTINE MOTAL 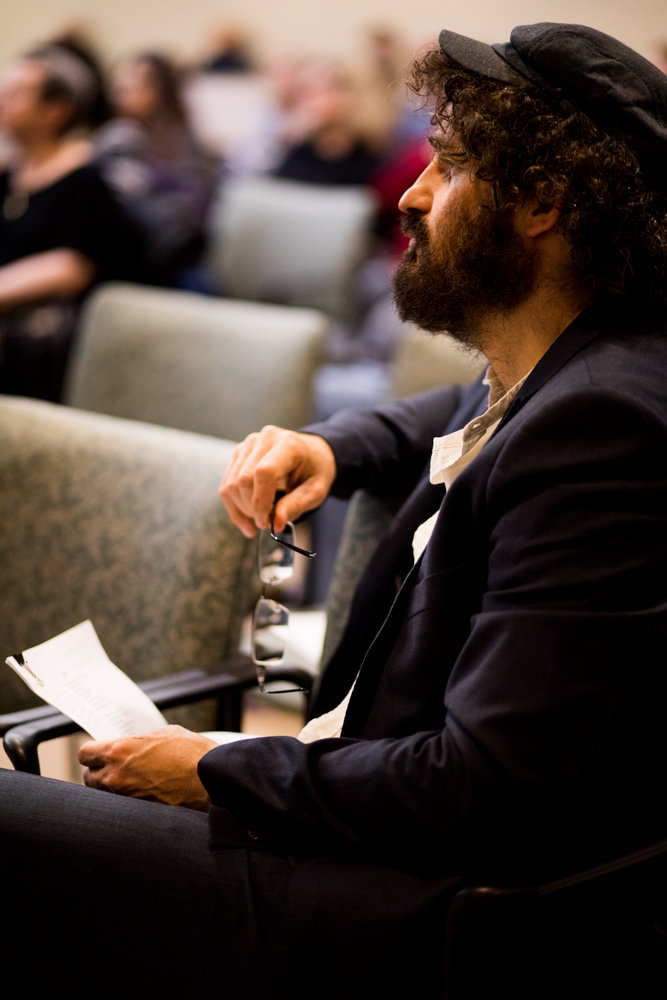 Hungarian actor Géza Röhrig listens to a poem during 'Write Me,' a poetry event in remembrance of the Holocaust at the Hebrew Home at Riverdale.
JULIUS CONSTANTINE MOTAL 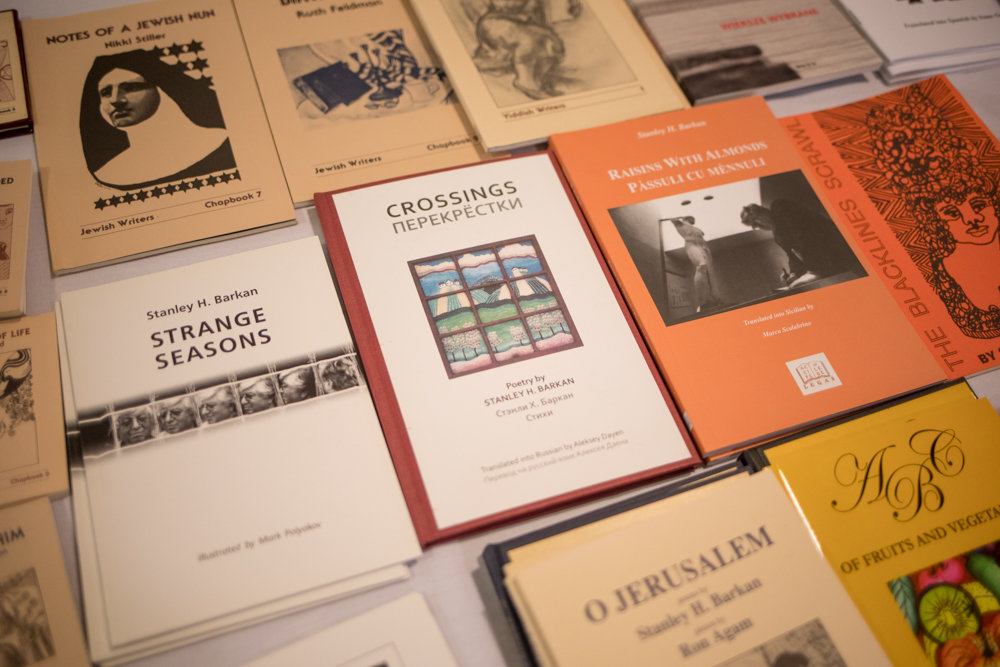 Poetry books sit for sale on a table during 'Write Me,' a poetry event in remembrance of the Holocaust at the Hebrew Home at Riverdale.
JULIUS CONSTANTINE MOTAL 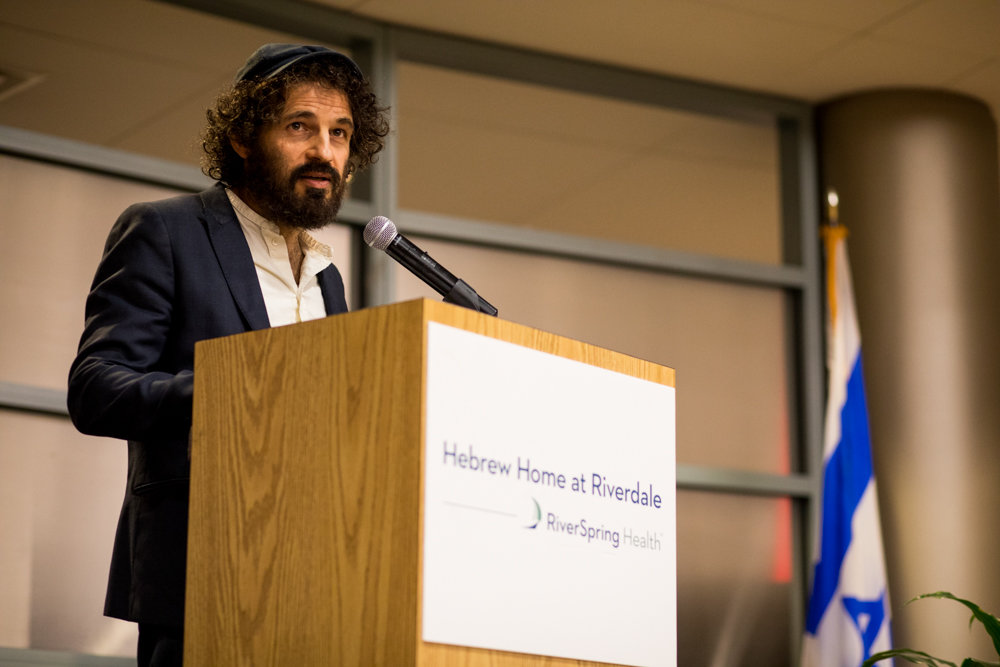 Hungarian actor Géza Röhrig shares a story during 'Write Me,' a poetry event in remembrance of the Holocaust at the Hebrew Home at Riverdale.
JULIUS CONSTANTINE MOTAL 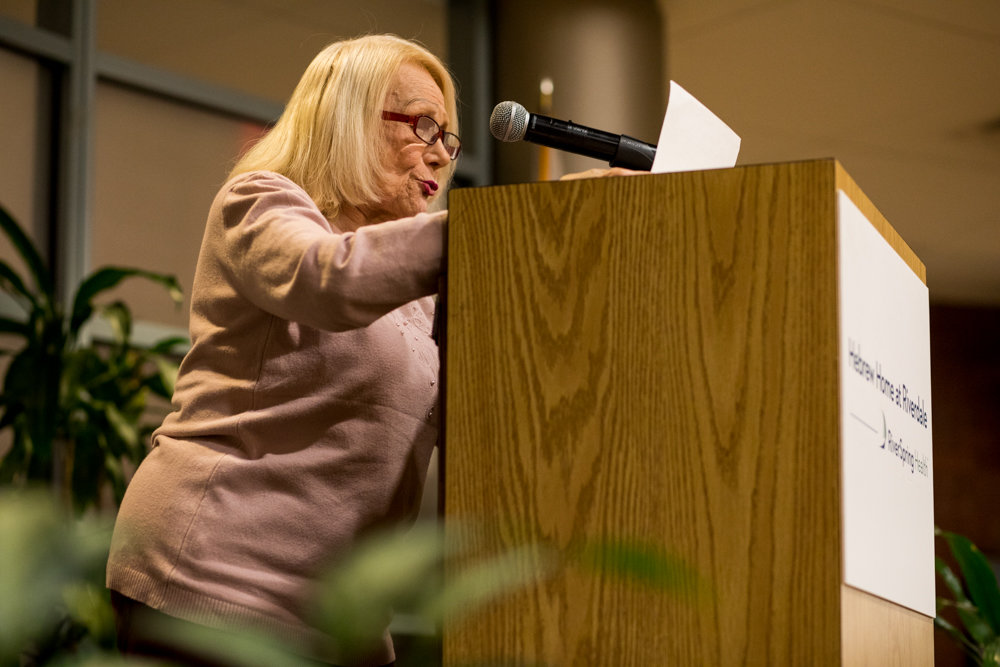 Hebrew Home resident Zelda Fassler reads an original poem during 'Write Me,' a poetry event in remembrance of the Holocaust.
JULIUS CONSTANTINE MOTAL 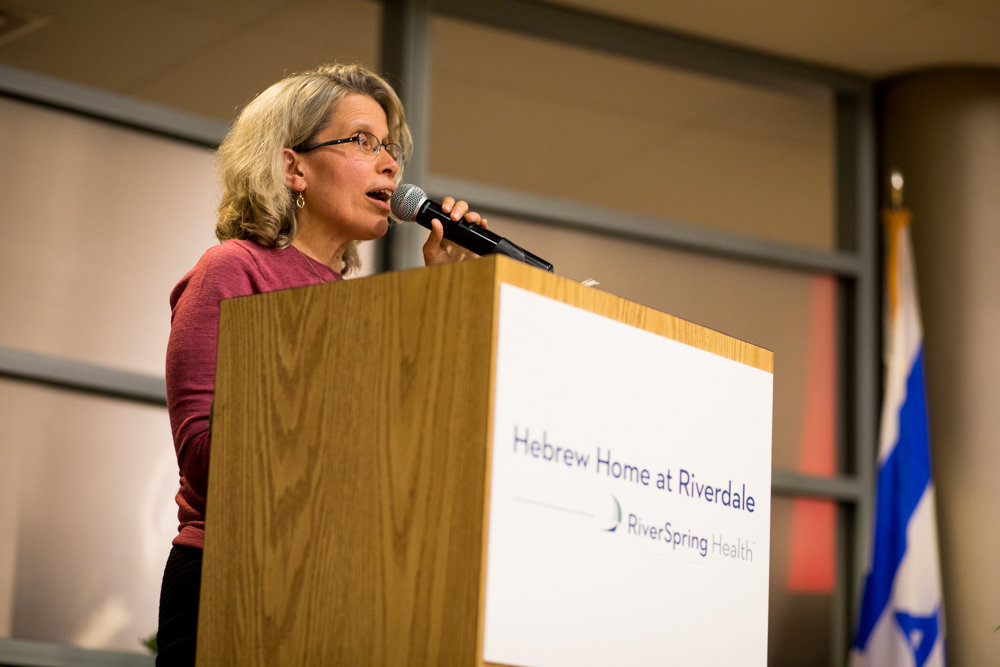 Sarah Stern of Spuyten Duyvil reads a poem from her book, 'We Have Been Lucky in the Midst of Misfortune,' during 'Write Me,' a poetry event in remembrance of the Holocaust at the Hebrew Home at Riverdale.
JULIUS CONSTANTINE MOTAL 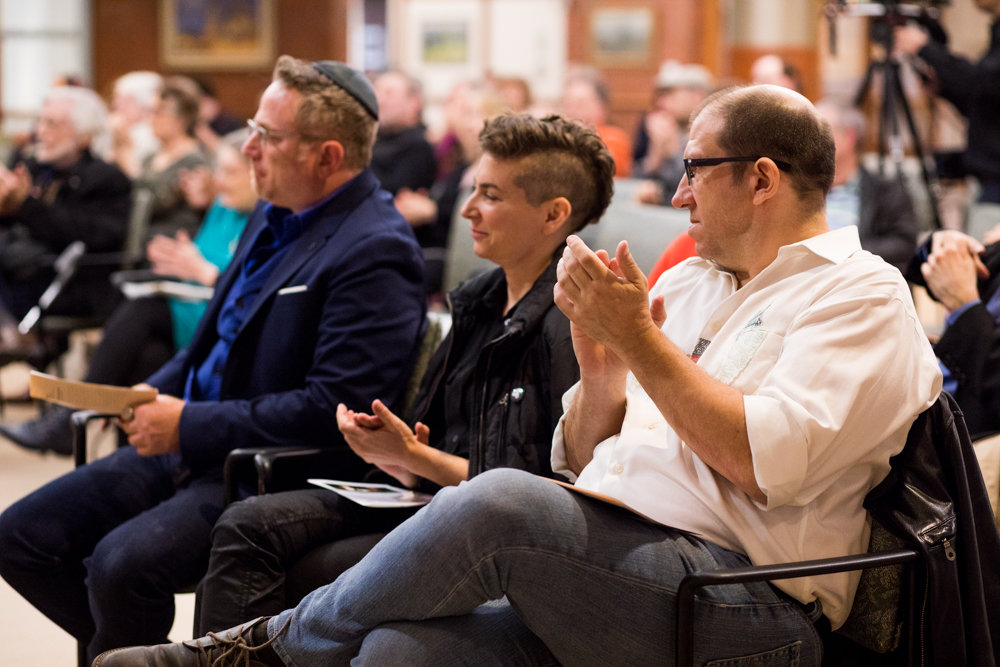 Audience members clap during 'Write Me,' a poetry event in remembrance of the Holocaust at the Hebrew Home at Riverdale.
JULIUS CONSTANTINE MOTAL
Previous Next
By TIFFANY MOUSTAKAS

Growing up, Deborah Kahan Kolb knew the stories of what her grandparents endured during the Holocaust. But watching her grandmother react to another tragedy? That was new to her.

The two joined the rest of the world in watching the two towers of the World Trade Center collapse on live television in 2001. Kolb recalls the fear in her grandmother’s eyes as she instructed her on what had to happen next.

“She said to me, ‘You have to call everyone in the family and pack, and we have to run because Hitler’s coming after us again,’” Kolb said. “This was not a political statement. It wasn’t about politics and who was responsible.

“She saw this devastation happening, and she felt someone coming after (her) again to kill (her) and it doesn’t leave … this trauma of what my grandparents had been through. It never left them, and it’s been transmitted to me … this feeling of being a target.”

Kolb thought a lot about that moment as she watched and continues to watch anti-Semitism unfold through events like the Charlottesville protests and synagogue shootings across the country.

“The fact of being a Jew in this day and age being targeted by neo-Nazis … has been very visceral to me,” she said.

As she tried piecing together these events, Kolb had a lot of questions about how people can ensure future generations know about the Holocaust.

“Now that my grandparents are gone and most of the actual survivors in the Holocaust are gone, who is left to bear witness when neo-Nazis come and target us?” she asked. “Who is there to shout? Who is there to wave the banner” of never forgetting?

As a poet, Kolb knew words were a powerful weapon and needed to be utilized. Last year, she won the Bronx Recognizes Its Own — also known as BRIO — an award from the Bronx Council on the Arts celebrating borough artists with a $4,000 grant.

Kolb’s first instinct after winning the BRIO was to do something creative and important with the money. She ultimately funded “Write Me,” a short film based on her poem, “After Auschwitz.”

The film follows a Holocaust survivor, played by Lynn Cohen — best known for her role as Magda on “Sex and the City” — who joins survivors of other forms of violence in reclaiming their bodies and histories after being tattooed and branded.

“I wanted to make poetry more accessible to a general audience,” Kolb said, “and I think film is a wonderful medium.”

But it wasn’t until Kolb heard her poem being read aloud that she realized just how much of an impact her work could make.

“When I sat in the room listening to Lynn read the poem with her emotion, she just brought it to life and I started crying,” Kolb said. “This is not only a poem that I’ve written that is now going to be out there, but the concept of the poem and the history that it’s telling, and the pain and suffering that is coming up for the reader and the audience and for the listener is very powerful.

Kolb recently took things a step further by turning to the Derfner Judaica Museum + The Art Collection at the Hebrew Home at Riverdale to organize a poetry reading and film screening for “Write Me.” The event took play May 1, on Holocaust Remembrance Day.

As a Riverdale resident, Kolb knew the Hebrew Home was just the place for the event, since the facility still has a number of Holocaust survivors living there, not to mention the Derfner Judaica Museum’s collection of Jewish ceremonial art common before the Holocaust.

“It’s here for us to see and reflect upon the history and to see what it means for us in this day and age,” she said.

Kolb was among a dozen poets — including Sarah Stern and Hungarian actor Géza Röhrig — to share their own work and Holocaust poetry.

Kolb wanted those in attendance not only to have learned from the reading and screening, but to leave feeling inspired with what they experienced.

“I do hope that they (came) away with a renewed appreciation of how we talk about trauma (and) how we relate to trauma as writers,” she said.

Especially since Kolb’s passion is to continue educating others about the Holocaust.

“For me, as a poet, I think it’s important that we find the words, we find a way to write poetry about the Holocaust, because we’re not beautifying it, we’re not romanticizing it,” Kolb said. “We are actualizing it through poetry.”

But the most important thing to Kolb is to never stop writing about the painful experiences people like her grandparents endured.

“If we don’t write about them,” she said, “then they will not be remembered.”

CORRECTION:  The actress who appears in “Write Me” is Lynn Cohen, probably best known for playing Magda in “Sex and the City.” A story in the May 9 edition provided an incorrect name.