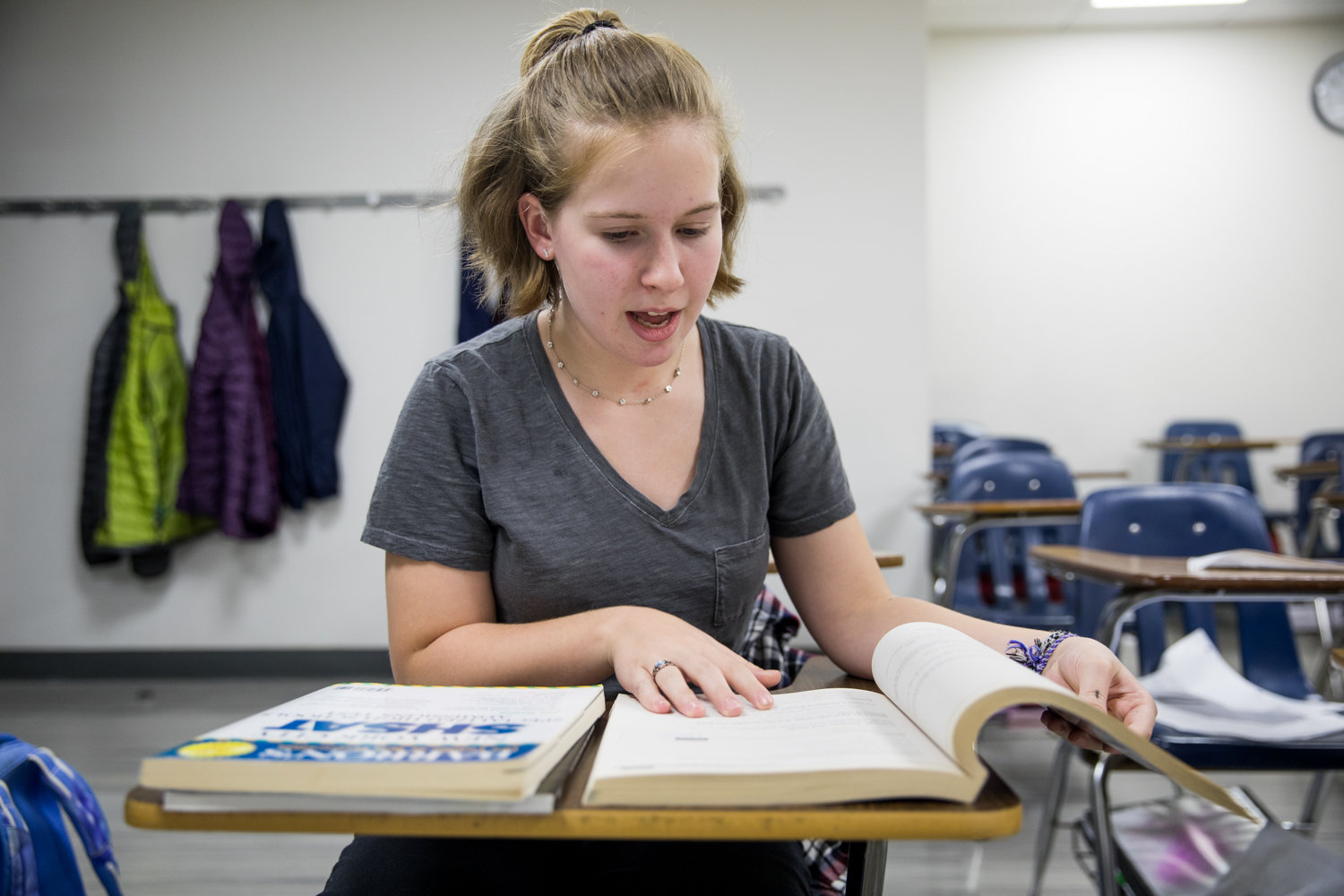 Kinneret Day School student Talia Schuldenrein looks through one of the test prep books she used to study for the Specialized High School Admissions Test, which she took along with thousands of other students Oct. 26. Talia hopes to get into Bronx Science where her father went to school.
JULIUS CONSTANTINE MOTAL 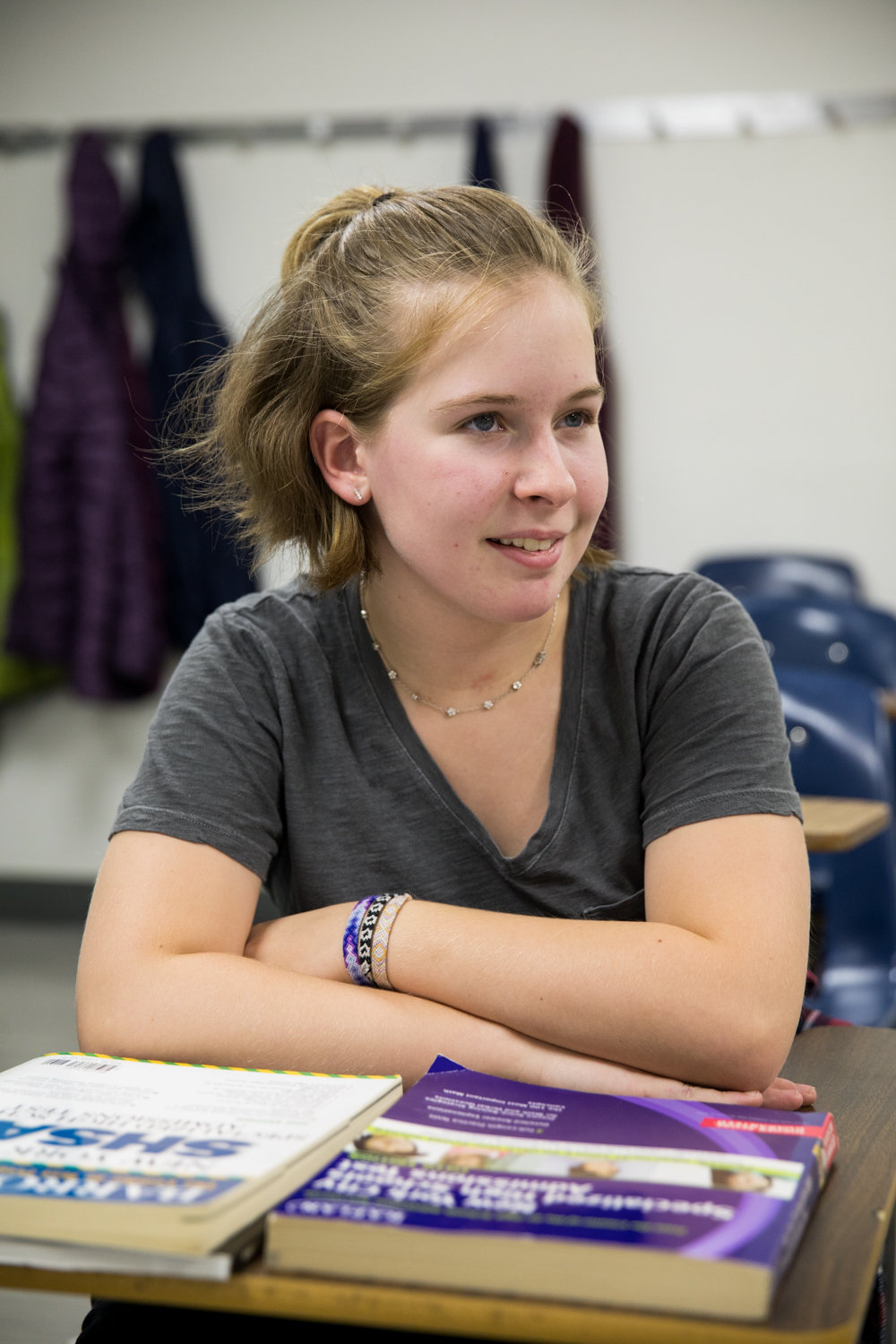 Kinneret Day School student Talia Schuldenrein did not get much sleep the night before the Specialized High School Admissions Test, but she is trying her best not to worry about the results, since they will not be available until March.
JULIUS CONSTANTINE MOTAL 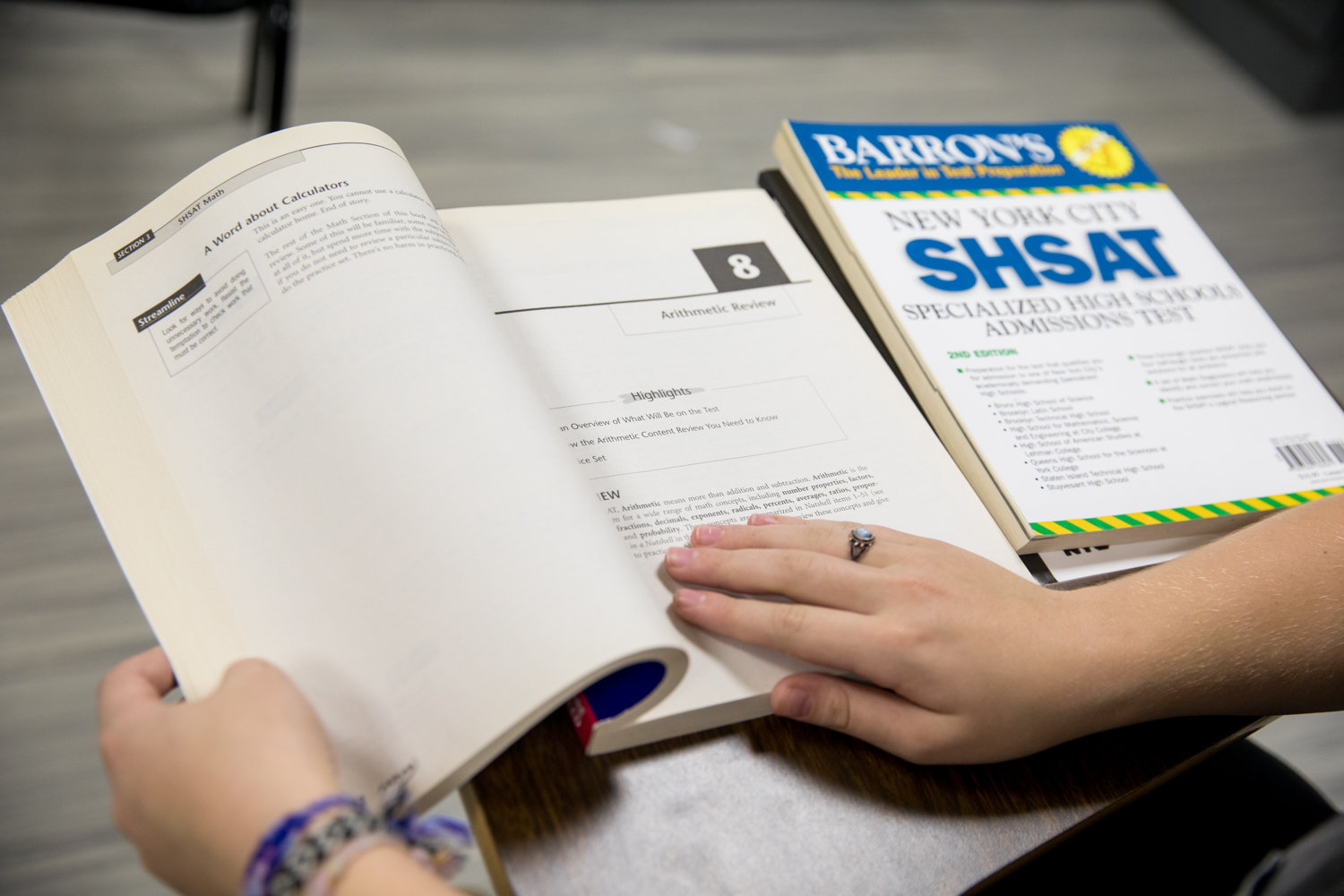 It was a summer for the books for Kinneret Day School student Talia Schuldenrein, who worked with a tutor to prepare for the Specialized High School Admissions Test.
JULIUS CONSTANTINE MOTAL 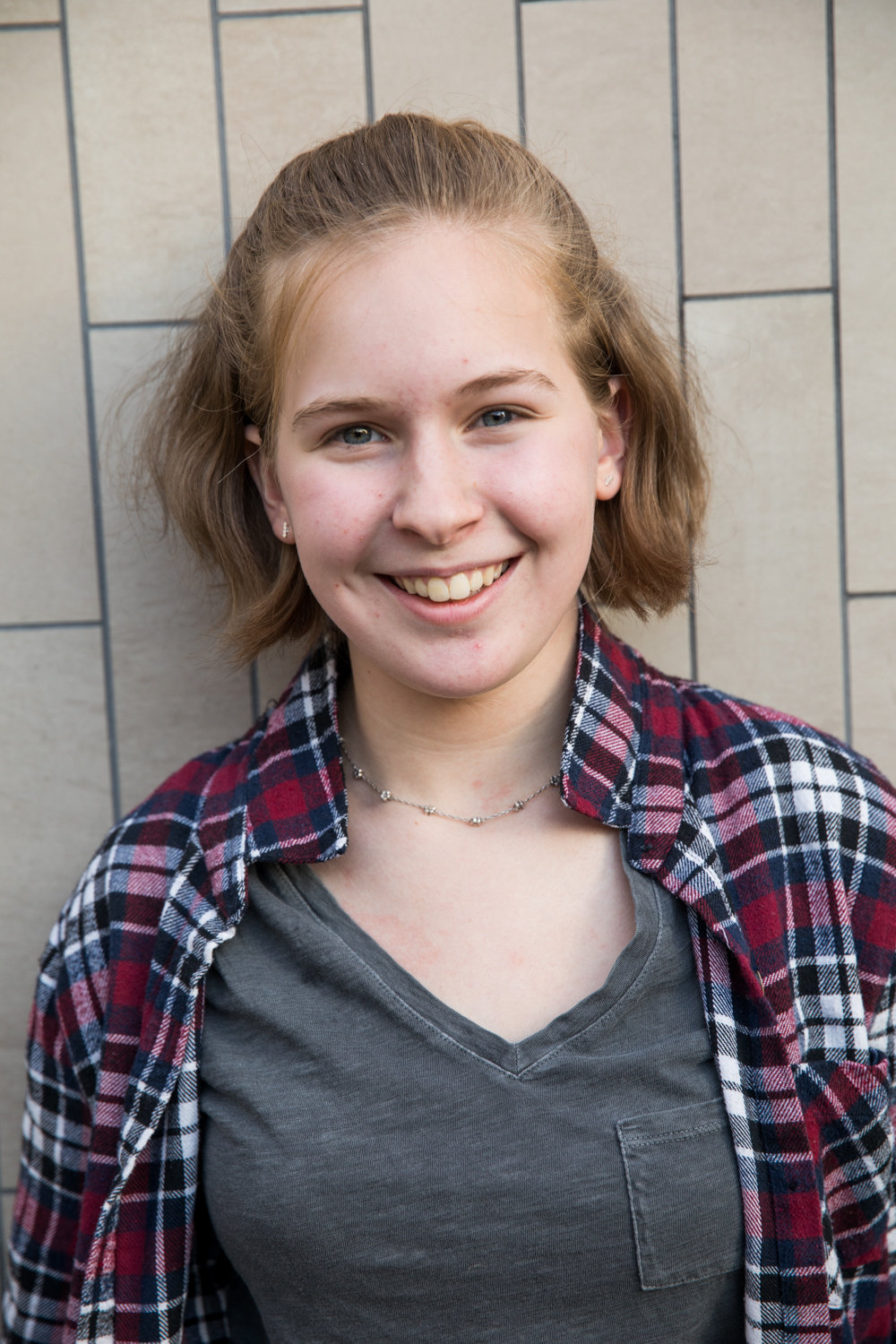 About 30,000 New York eighth graders and freshmen filed into test centers across the city last month, ready to take the quite important — and controversial — Specialized High School Admissions Test, more commonly known as the SHSAT.

Among them was Kinneret Day School eighth-grader Talia Schuldenrein who, after months of preparation and panic, was ready to be done with the whole process.

The SHSAT is the only admissions factor for eight of New York City’s specialized high schools — students must score above a certain threshold to even be considered. Only one of the schools, the Fiorello H. LaGuardia High School, does not require the test. But because that Upper West Side school focuses on music and the performing arts, prospective students must audition their way in.

“I feel like a public school really expresses diversity,” Talia said. “Once you step into high school, a public school at that, they offer really good education, and you’re with a bunch of different people who are different than you, and you get to express differences and meet new people.”

Talia has her sights set on LaGuardia, where she’d build on her love of dancing and performance, but is applying to a few others, including Bronx High School of Science, her father’s alma mater.

“I have six years of Irish dance background, and then I learned how to do ballet,” Talia said. “And then they moved me up to pointe, and tap.”

Preparing for the SHSAT can look a lot like getting ready for the SAT, which many colleges still require for entry. Parents who can hire tutors, and schools and libraries host public study sessions to prep middle schoolers for the arduous math and English examination.

Talia started preparing for the SHSAT this past summer.

She worked with a private tutor in two-week sessions throughout her school break, then weekly for more intense sessions for the two months leading up to her actual test.

“The night before the test, I didn’t actually get a lot of sleep, which is not a great thing, because I actually had a big panic,” Talia said. “And I was like, ‘This is my whole future!’”

What was most difficult for Talia was staying on track for the whole three-hour span of the test, managing her time enough to allow her to finish.

“A lot of times I have to double-check myself, and I’m like, ‘I can’t do that,’ this is not a test where you can do that,’” she said. “You just have to keep on going. If you run out of time, that’s not a good thing.

Everyone — from educators and parents to city officials — has scrutinized the SHSAT over the years. Schools chancellor Richard Carranza and Mayor Bill de Blasio have gone as far as calling for the tests to be scrapped entirely.

According to the chancellor and mayor, the tests contribute to a lack of ethnic diversity in specialized high schools. Only 3.5 percent of black test-takers were offered a seat for the 2019-20 academic year, compared to 5 percent Latino, according to one study Carranza and de Blasio reference. By comparison, more than 27 percent of white students were offered a seat.

The city council voted last month to create a new task force charged with examining racial inequalities in specialized high schools. That includes taking a closer look at the exams themselves.

Some SHSAT supporters say the school issues run deeper than the tests, and that scrapping them merely punishes students who already have worked hard for high scores.

“I don’t think they should get rid of them,” Talia said. “I do think there are a lot of really smart people who just aren’t test takers who are left out of this whole situation. If there are some people who are very genuinely smart, they just need some more help with time management, and they don’t get into that school. It’s kind of like, it’s not really that fair.”

Tutors can be pricey. For example, Kweller Prep, a standardized test prep service, charges $2,500 for a 14-class schedule, according to its website.

Talia says it’s thanks to her tutor she was prepared for the SHSAT. While she already had learned most of the material, the tutor helped her better prepare for  the structure of the test, how to manage her time, and exactly what to expect.

“I think they should look more in-depth about ‘maybe we can help people who aren’t that good of test takers,’” Talia said. “‘Maybe they can have a little bit of extra time, maybe they can have some accommodations.’”

Talia and the other thousands of test takers will have to wait until March to find out their scores. In the meantime, she’s trying not to think about it too much.

Still, though, she feels it was worth it to her to put in all the effort to prepare for the test.

“It seems like a really big thing, and two months are going to be really rigorous,” Talia said. “If you don’t put in the effort, a whole opportunity could be out the door. You want to put in the effort even, if it’s sometimes difficult.”