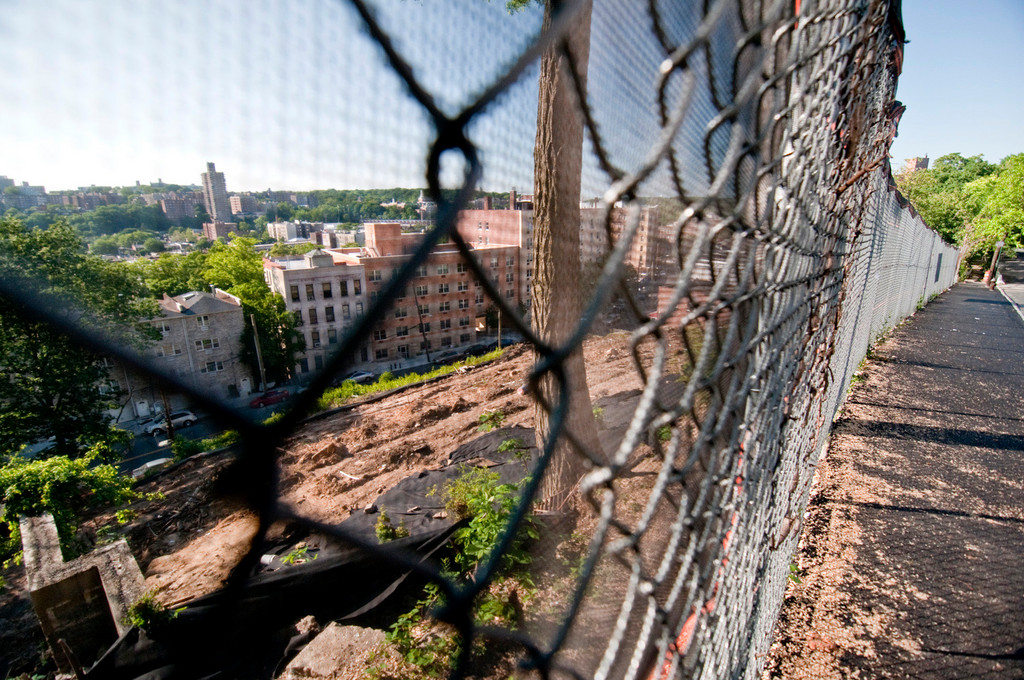 The lot at 4282 Ft. Independence St. has become the focal point of a debate on land use and development, pitting Van Cortlandt Village residents against the interests of developers.
Karsten Moran / Riverdale Press 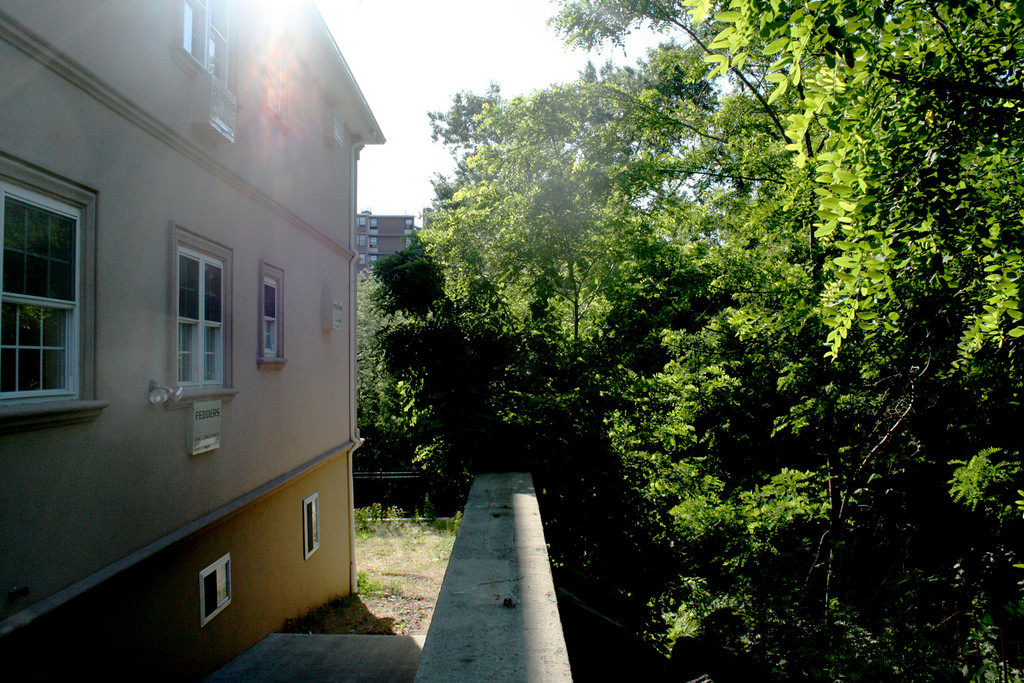 More than 250 years after militiamen defended the historic neighborhood of Van Cortlandt Village against the British, the neighborhood’s current residents have rallied to push back encroaching developers. Where the remnants of Revolutionary War Fort Independence can still be found, they have been vigilant in struggling to maintain it as a desirable place to live.

But developers see it — and neighborhoods like it — as the next Bronx frontier. In the South Bronx, burnt out buildings have been replaced with increasingly expensive apartments and there are few vacant lots these days.

About five years ago, when the South Bronx became fully saturated, developers began buying up a new set of properties. Some of them, like the ones in VC Village, are difficult to build on. Others are toxic or polluted, according to Community Board 8’s Land Use chair, Charles Moerdler, who sits on the New York City Housing and Development Corporation board and served as Commissioner of Housing and Buildings of the City of New York in the late 1960s.

Real estate is all about location, so developers are willing to invest in hard-to-develop sites if they are considered to be in good neighborhoods.

There are two such sites in Van Cortlandt Village: 3482 Ft. Independence Street and 3333 Giles Place, both rocky lots on steep slopes in a diverse and active neighborhood with low crime and a reputation for being a nice place to raise a family. Activist members of the Fort Independence Park Neighborhood Association say it was their hard work that earned it the reputation.

FIPNA has been working to keep the area around Fort Independence Park flourishing since it was founded in 1978. It organizes clean-ups and applies for grants to plant trees. Recently, members of FIPNA ripped up asphalt on West 238th Street between Cannon Place and Sedgwick Avenue and planted a garden.

Because now, FIPNA is fighting to keep the developers it has attracted at bay.

FIPNA has a long track record of fighting back against unwanted development. In 2006, the group successfully stopped the construction of attached two-family homes at 3882 Cannon Place because the developer did not follow zoning rules. FIPNA also successfully stopped construction of 3333 Giles Place because the building was too large and too close to the sidewalk to meet current zoning regulations. Community Board 8 downzoned the area six years ago, around the same time the developer began building.

But such battles never seem to cease. That same developer is now back, appealing to the Board of Standards and Appeals that it has a vested right to continue putting up the 63-unit building.

FIPNA’s concern is that large buildings on tiny streets will create a canyon affect and  block sunlight from the small homes across the street. They also fear that over time, developers will buy up the small homes and replace them.

Margaret Groarke, vice-president of FIPNA who lives across the street from 3333 Giles, said she wants to see one- and two-family homes constructed on the lot. As an example, she pointed to two new buildings at 3321 and 3315 Giles Place.

But that’s exactly what developers are trying to build.

In addition to Paris Giannopulos’ plans for a 63-unit building, construction is currently underway on a 93-unit building at 3482 Ft. Independence Street.  In that case, Jackson Development has “as-of-right” building privileges based on existing zoning regulations.

For FIPNA, those privileges represent the biggest hurdle to maintaining the neighborhood’s character.

Many of the streets are zoned for six- and seven-story buildings because buildings that size already exist there, even while one- and two-family homes are also common.

Mr. Moerdler said Community Board 8 successfully changed the zoning of many areas in Kingsbridge Heights, but was unsuccessful in trying to downzone from R6, which allows six to 13 stories, to R-4, which allows mostly one- and two-family homes.

Dan Padernacht, the chair of Community Board 8’s Traffic and Transportation committee who is the neighborhood’s unofficial representative on the board, said an increase in residents is a problem if services don’t increase as well.

“I think developers come in, build and max out projects. Nobody’s looking at the big picture. There doesn’t seem to be a master plan ... if you’re going to develop you need to look at all the other resources and traffic patterns,” he said, adding that school overcrowding will become a growing problem as the population swells.

Harvey Epstein, director of community development for the Urban Justice Center, said the city administration favors development to support Mayor Michael Bloomberg’s goal of adding a million people to the city before 2030, leading developers to rush-in to build the largest buildings possible on any available lots.

“[Development is] moving everywhere right now,” he said. “There are very few lots available now to develop, which means prices of lots are more expensive ... Difficult sites, complicated sites, building on small lots, they are building on all of it.”

He also said since the co-op market is oversaturated, many developers are focusing on rentals. The Van Cortlandt Village area is historically known for moderate and middle-income co-ops, including the Amalgamated Housing Cooperative and Park Reservoir Housing Cooperative.

Ms. Hart’s said that while the community board listens to residents’ concerns, it is powerless against many government agencies. So FIPNA takes on the job of trying to get developers to play by the rules, including making Freedom of Information requests and checking court documents and building permits online.

A few weeks ago, construction halted at 3482 Ft. Independence after the Department of Buildings issued a “Stop Work Order” for doing excavation work without a permit and for and not having a proper perimeter fence. Kristin Hart called in a complaint to the Department of Buildings and when Robert Drake, a 17-year resident of Ft. Independence Street saw workers continuing construction, he called in a complaint and the DOB issued another “Stop Work Order” for noncompliance.

FIPNA, however, argues that groups like theirs should have more weapons in their arsenal against unwanted development. The developer of 3482 Fort Independence said at a public meeting he needs bonds from the New York City Housing Development Corporation to build the 93-unit apartment building. FIPNA argues the publicly funded organization should not be allowed to subsidize projects the community opposes.

The organization is also in discussions with the National Register of Historic Places to have the entire area designated a historic district, which would create an additional hurdle for new developments and represent a huge victory for FIPNA, which has been fighting for historic designation for decades.

George Washington scouted British forces in northern Manhattan from Fort Independence during the Revolutionary War. Before Jerome Park was a reservoir it was home to horse racing and was the home of the original Belmont Stakes. The Shalom Aleichem Houses complex was the second co-op in the Bronx, founded by Yiddish speaking Marxists in the late 1920s. Because of its history, Shalom Aleichem is eligible to be designated as a historic landmark and FIPNA is currently working on having that accomplished simultaneously with the entire area.

Mr. Moerdler said he thinks community boards should “absolutely” have more input to affect zoning and make decisions about its neighborhoods, but with the centralized Bloomberg administration, the board is limited in what it can achieve.

For inspiration, Ms. Hart said she looks to the past. In the 1960s, community activist Jane Jacobs stood up against the city’s “master builder,” Robert Moses. Ms. Jacobs’ book, The Death and Life of Great American Cities, is a critique of modern city planning policies, including the way Mr. Moses changed New York. In 1964, Mr. Moses plan to build a Lower Manhattan Expressway through Greenwich Village was killed, largely because of Ms. Jacobs’ efforts.