Protest rumors turn into a peaceful vigil at Seton Park 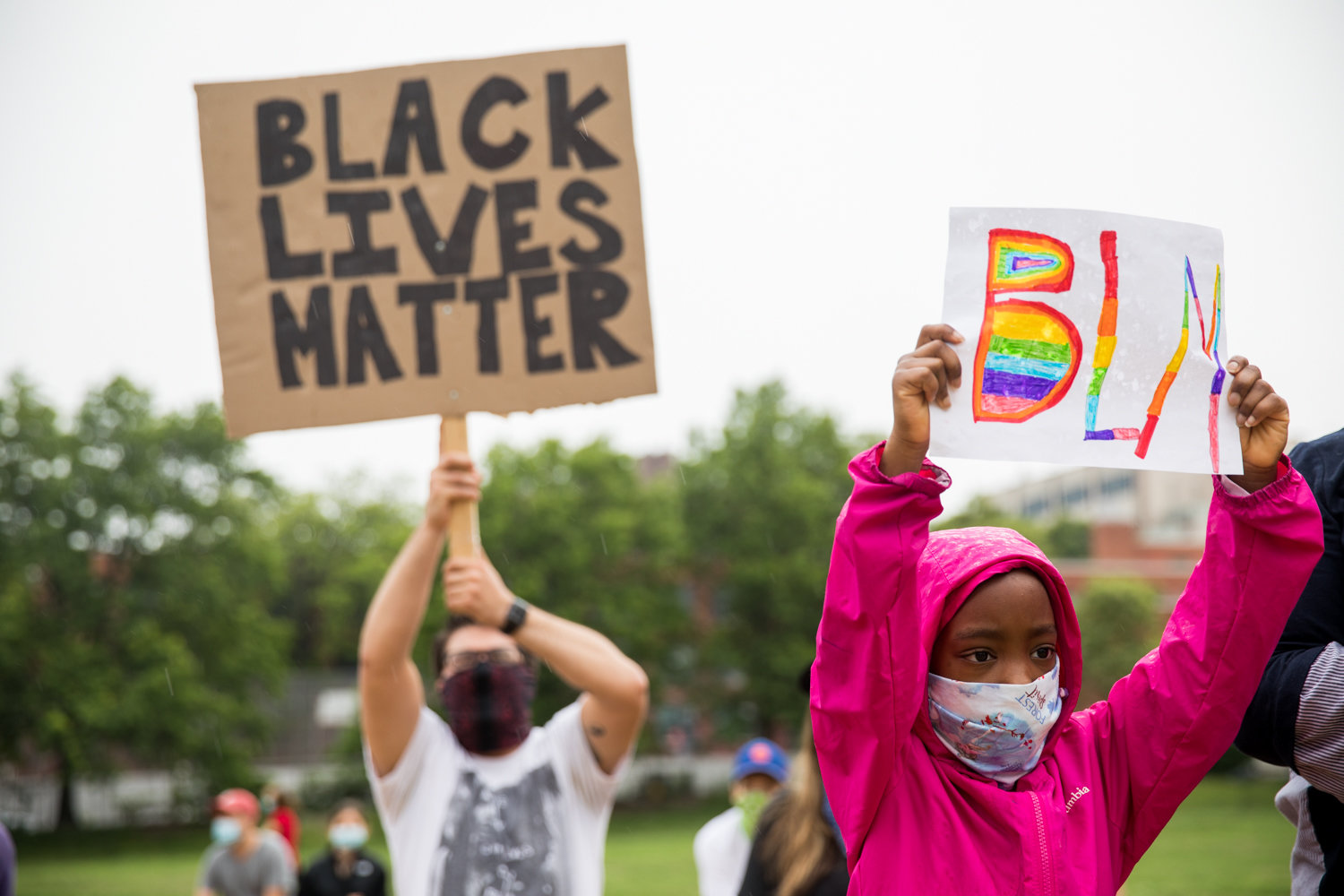 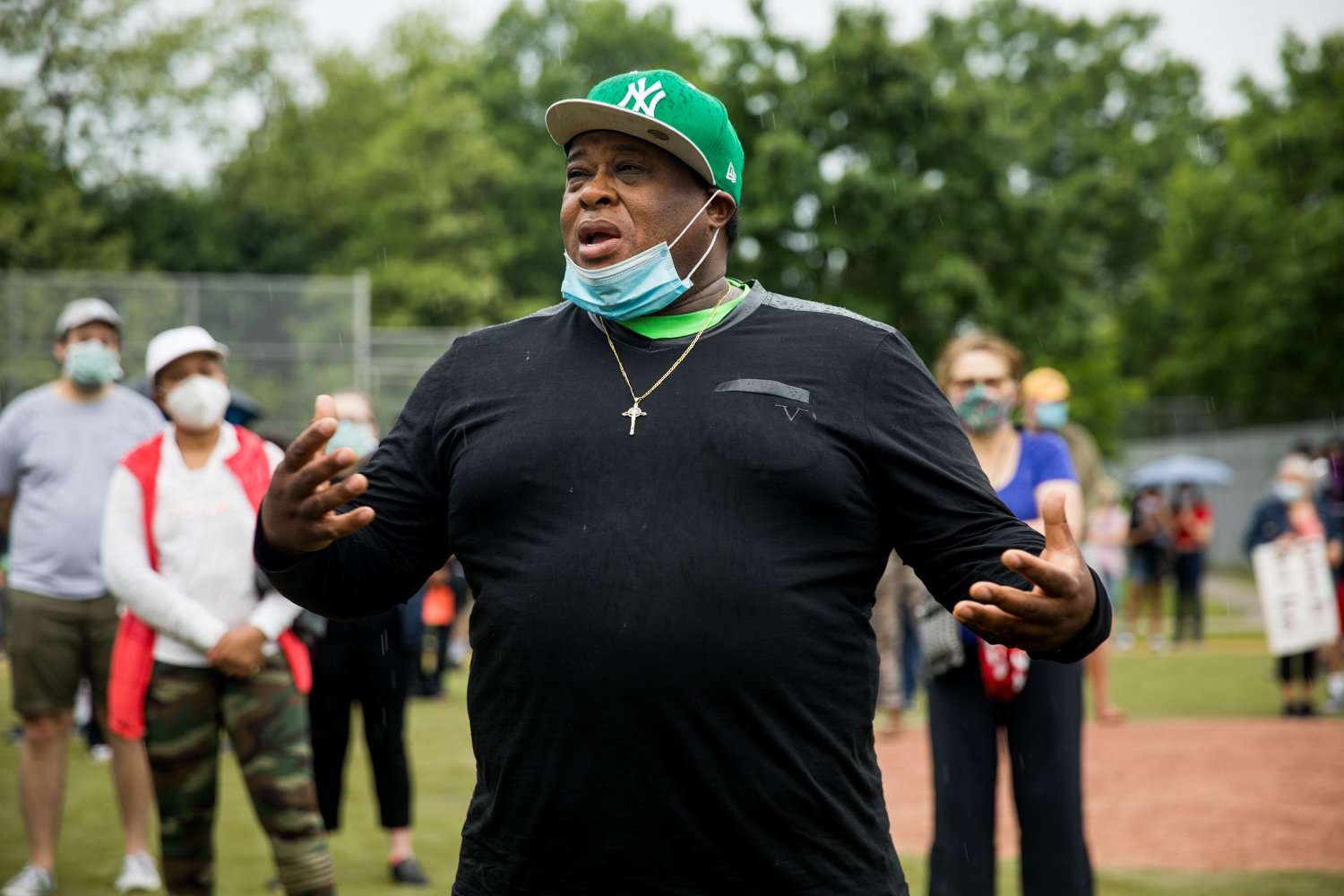 Jimmy Britt talks about his experience with police brutality during a vigil in Seton Park that was put together following the death of George Floyd in Minneapolis.
JULIUS CONSTANTINE MOTAL 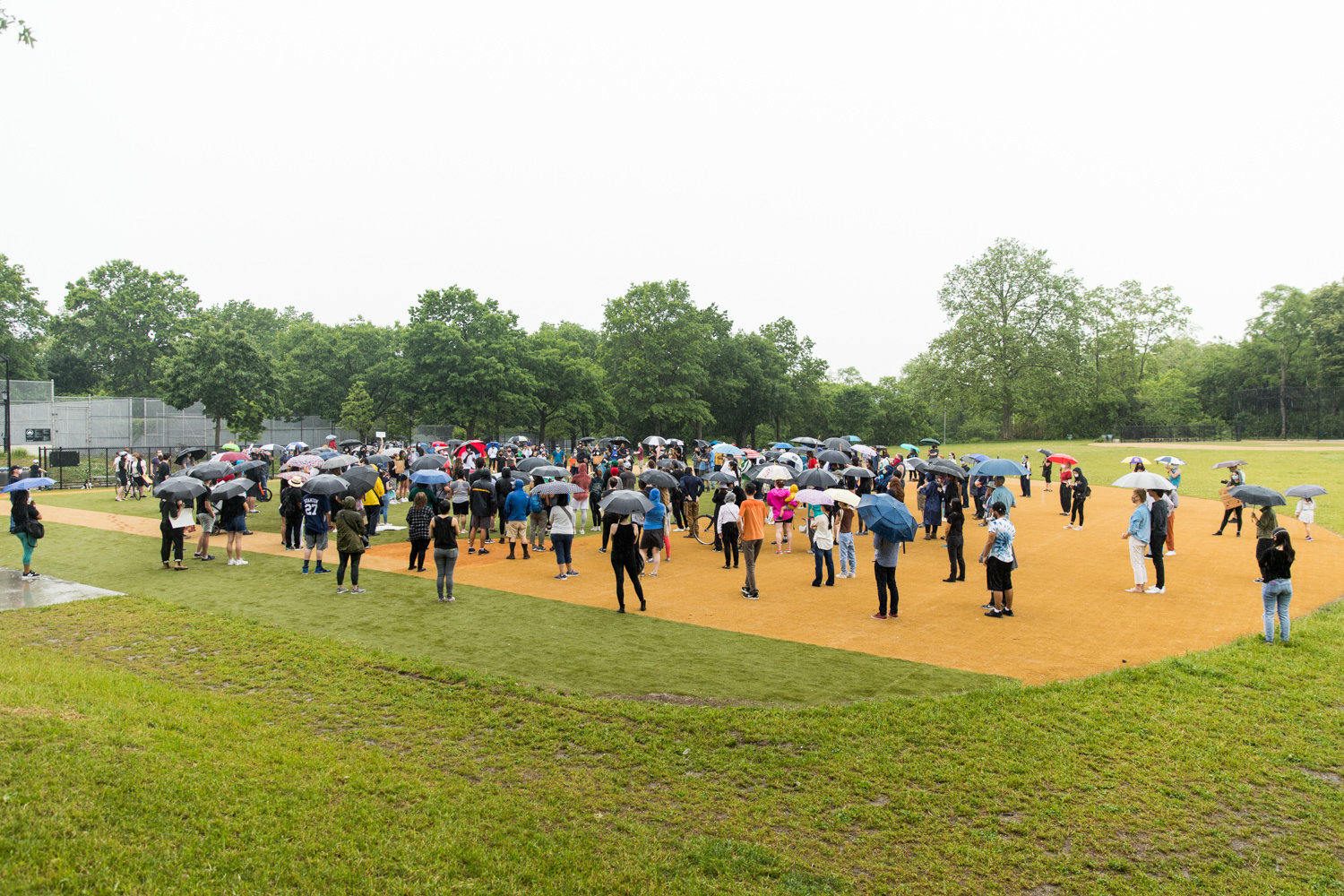 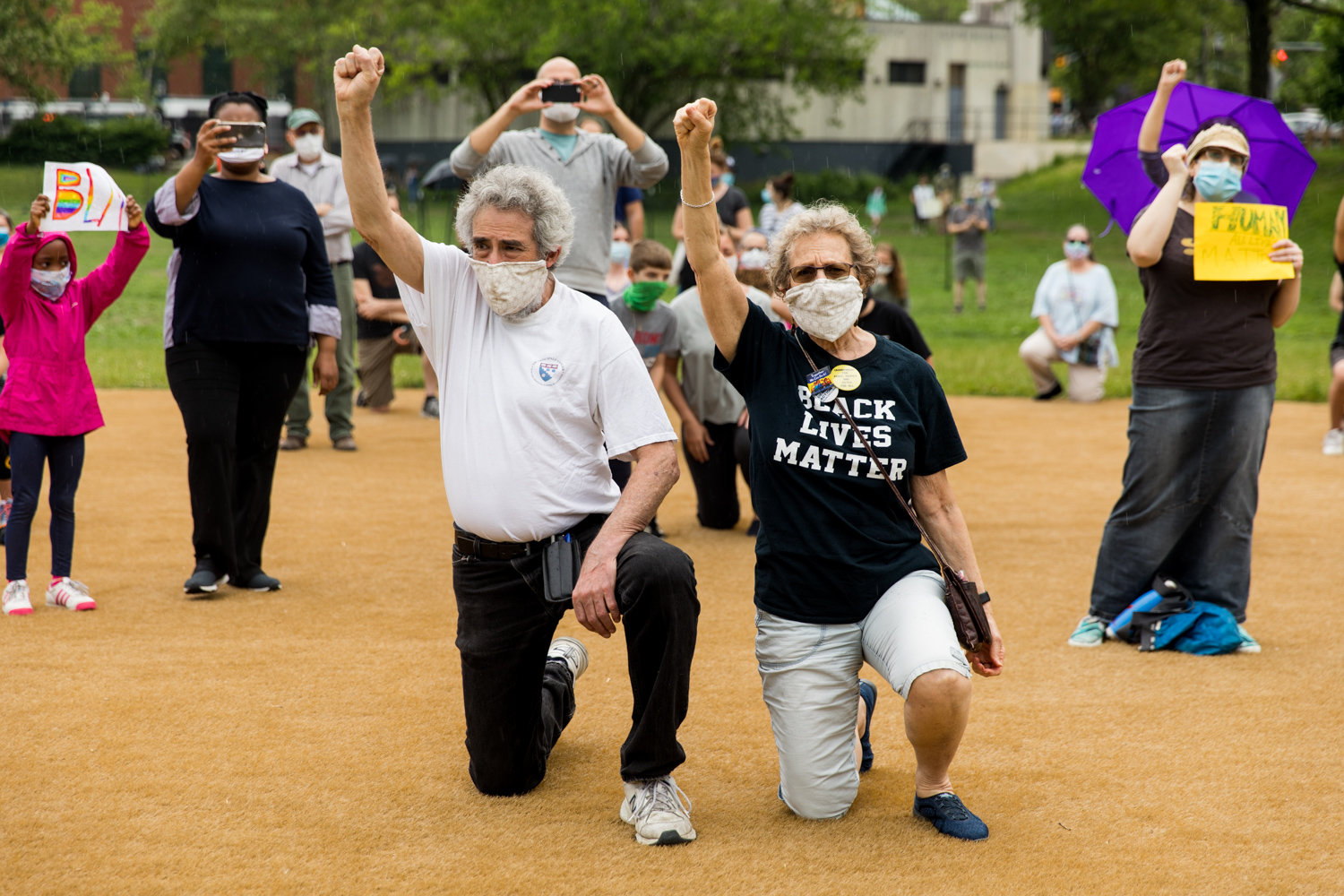 Steve and Bobbi Siegelbaum kneel while raising their fists at a vigil in Seton Park remembering those killed by police brutality.
JULIUS CONSTANTINE MOTAL 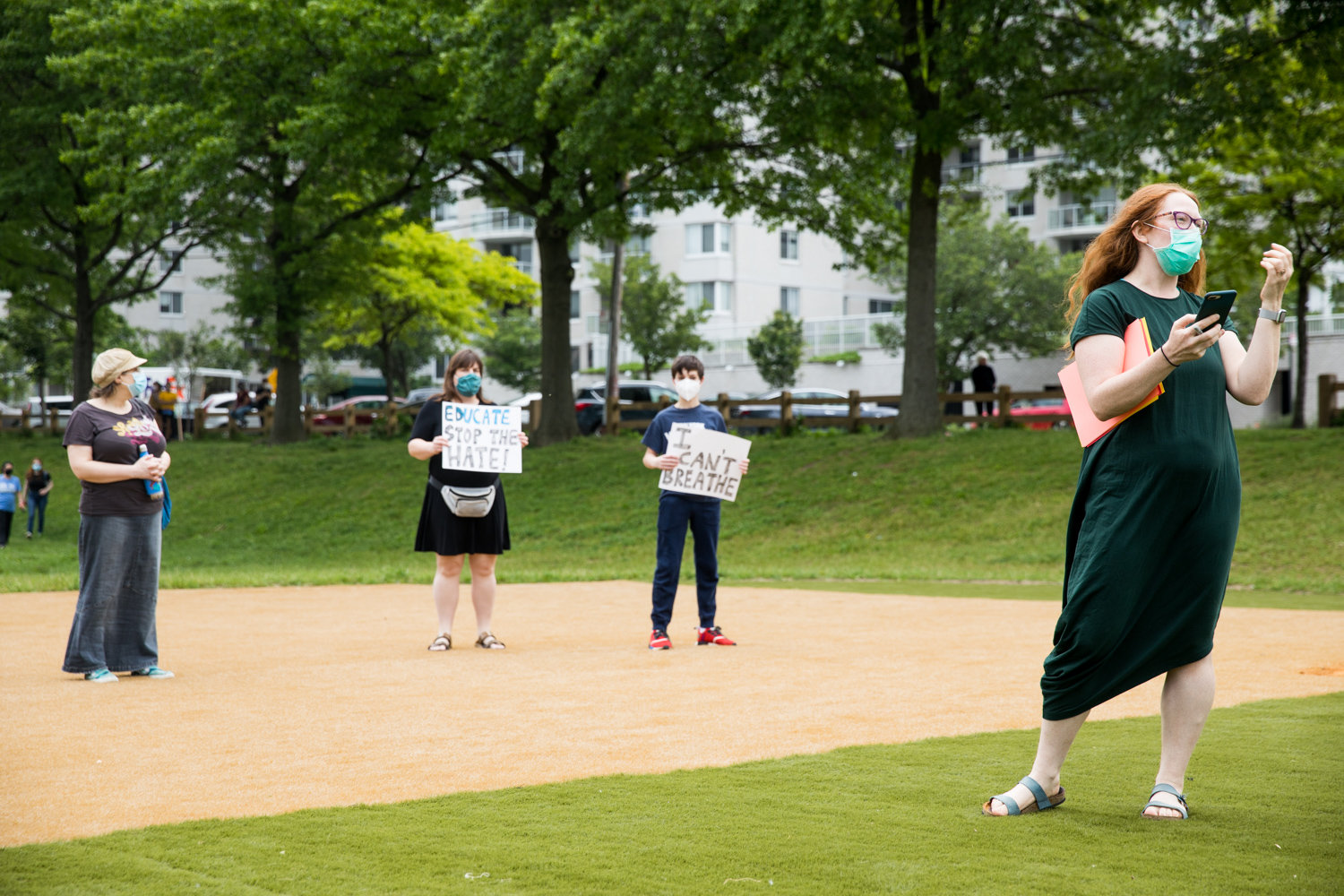 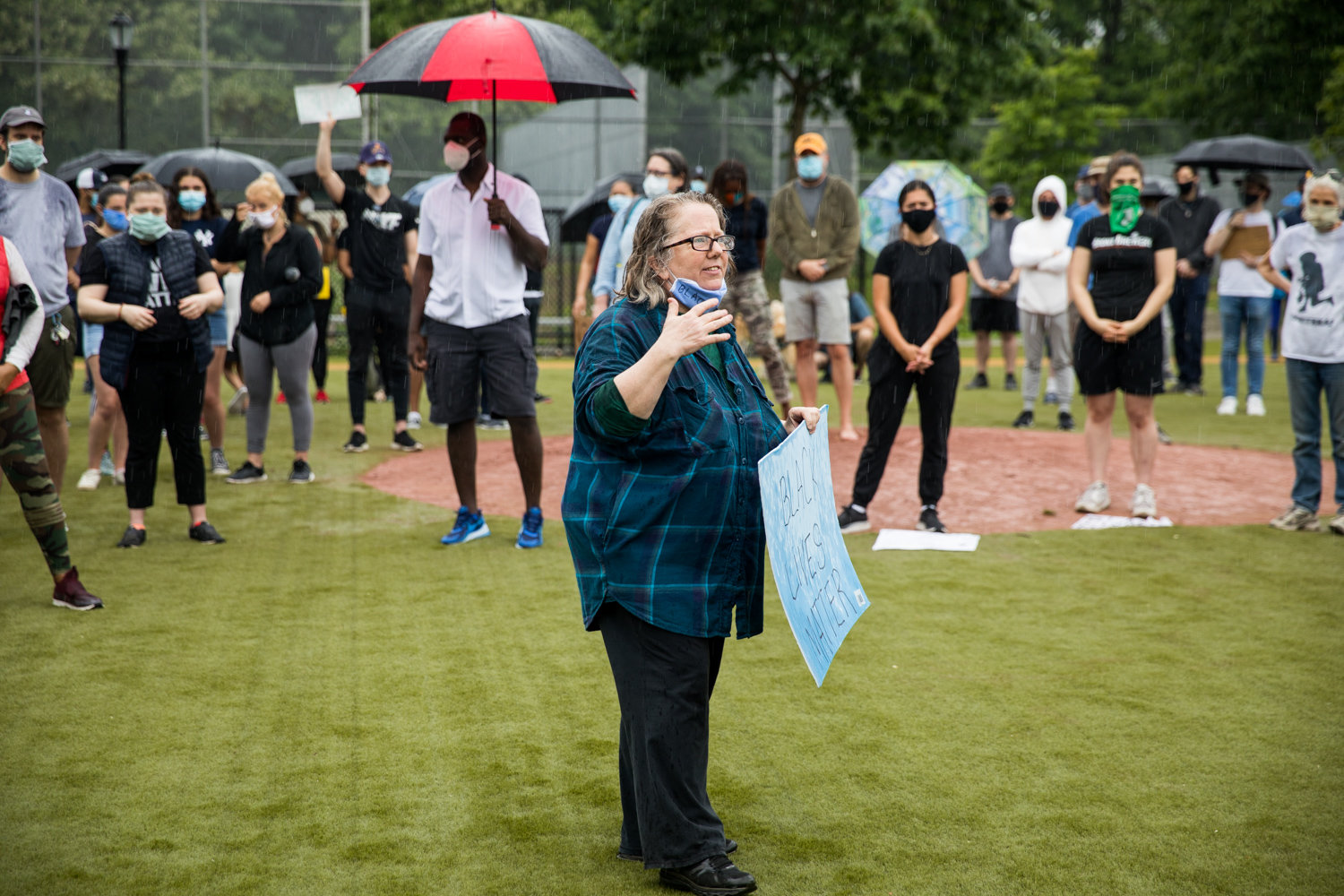 All over the country, tens of thousands of people have turned out to protest police brutality following the police-involved killing of George Floyd in Minneapolis.

Many of those protesters can be found in New York City, flowing through the streets of all five boroughs night after night, facing threats of arrest, especially when Mayor Bill de Blasio had his controversial 8 p.m. curfew in effect.

It was still a surprise, though, when co-op residents around Seton Park were given warnings about a protest supposedly planned for the afternoon of June 3.

Some of those warnings hinted at potential violence in the park, and rumors started swirling on social media about what was to come. By Wednesday morning, however, it had become clear that the rumors were unsubstantiated, and no one could quite pin down who started spinning such yarns.

That’s where Sasha Parsley Kesler came in. Angry about the rumors and the related discourse on social media, Kesler took to Facebook and Instagram to organize a last-minute vigil remembering black victims of police brutality.

“I made a Facebook invite, just sort of quickly inviting my friends,” Kesler said. “This was, like, maybe 10:30 in the morning. And putting it in all the Facebook groups.”

She called the 50th Precinct to see if she would need a permit for a gathering, and to ask about the alleged warnings about a protest. She didn’t need a permit, and no, the New York Police Department never issued a formal warning to The Whitehall, or any other residential building in the area.

Kesler planned to at least gather a few people on the grass at Seton Park to read the names of black people killed by police in the last decade, observing a moment of silence between each name, and another at the end of the vigil.

On Wednesday afternoon, however, nearly 200 people gathered on the Independence Avenue field that straddles Riverdale and Spuyten Duyvil. They read the names as planned, and then shared their own experiences with what they described as excessive force by police as well as protesting.

Jimmy Britt talked about the time a police officer shoved him to the floor of a subway station in the early 2000s before spraying tear gas into his face. All while the officer’s partner looked on.

“I know I could have died,” Britt told The Riverdale Press after the event. “I was the same person saying I can’t breathe. I was on the floor, Maced, on the floor of the train station, where there’s no ventilation, and I have high blood pressure. That, mixed with the Mace … I can’t breathe.”

Watching the following years of black Americans killed by police has been “heartbreaking,” Britt said, and he’s constantly reminded of what happened to him.

“I believe that all cops are not evil,” he said. “When I’m around police officers, depending on what I see — if I can see the distance, then I might move away. I always give them courtesy and respect. But every time I look in the mirror, when I look in the mirror, it’s a constant reminder of what happened to me.”

The scale of the current protests — spreading across the globe as well as in most if not all 50 states — gave him hope that they might bring real change.

Joe LaPinte watched the response to the rumored protest on social media and in neighborhood chat groups in disbelief.

“The reason I came here is because, in the chat, they were saying things, and I’m like, do they realize I live here?” LaPinte said. “When I read this stuff, it’s like, did I buy a house in the wrong place?”

Those responses included one neighbor saying she was afraid to walk her dog outside because of black protesters.

“The reality is, for people like me, I’ve never been to jail, I don’t know what a handcuff looks like,” LaPinte said. “I could say this is not my problem. But I have two children. Mixed-race or not, when I look at them, guess what my fear is? It’s for the 14-year-old boy that lives there, that’s being a stupid kid, yelling, running around. That somebody from this Whitehall building that they’ve been swimming in all their lives don’t recognize them, and now they’re dead.

LaPinte’s father had been successful, allowing him to grow up in a neighborhood like Riverdale. At 14, he was stopped by a police officer who didn’t believe he lived there. He ended up headed to court for loitering. The judge, he said, asked what he was doing in court and looked at the summons.

“He said to me, ‘You can’t loiter at a bus stop, young man. You were being harassed,’” LaPinte remembered. “I didn’t know that. I didn’t know that. So yes, as a parent, you start having that conversation early. Especially when you live in a neighborhood where you look like a needle in a haystack.”

Kesler hoped the event would serve as an introduction for people just starting to get into anti-racism work. She was sure people left the vigil feeling good, but feeling good doesn’t change oppressive systems.

“This is something that’s continuous work that needs to be done on all levels, the personal and the political,” Kesler said. “I hope people will continue to stay engaged, and, in Riverdale, to remember, first of all, that Riverdale is not just a white community, which it is often perceived to be … and work to think about what are the systems we’re upholding here that are continuing to perpetuate inequality across the city we live in.”