Quiet in class, but speaking up on the airwaves

Clinton students share experiences with COVID, college, everything else 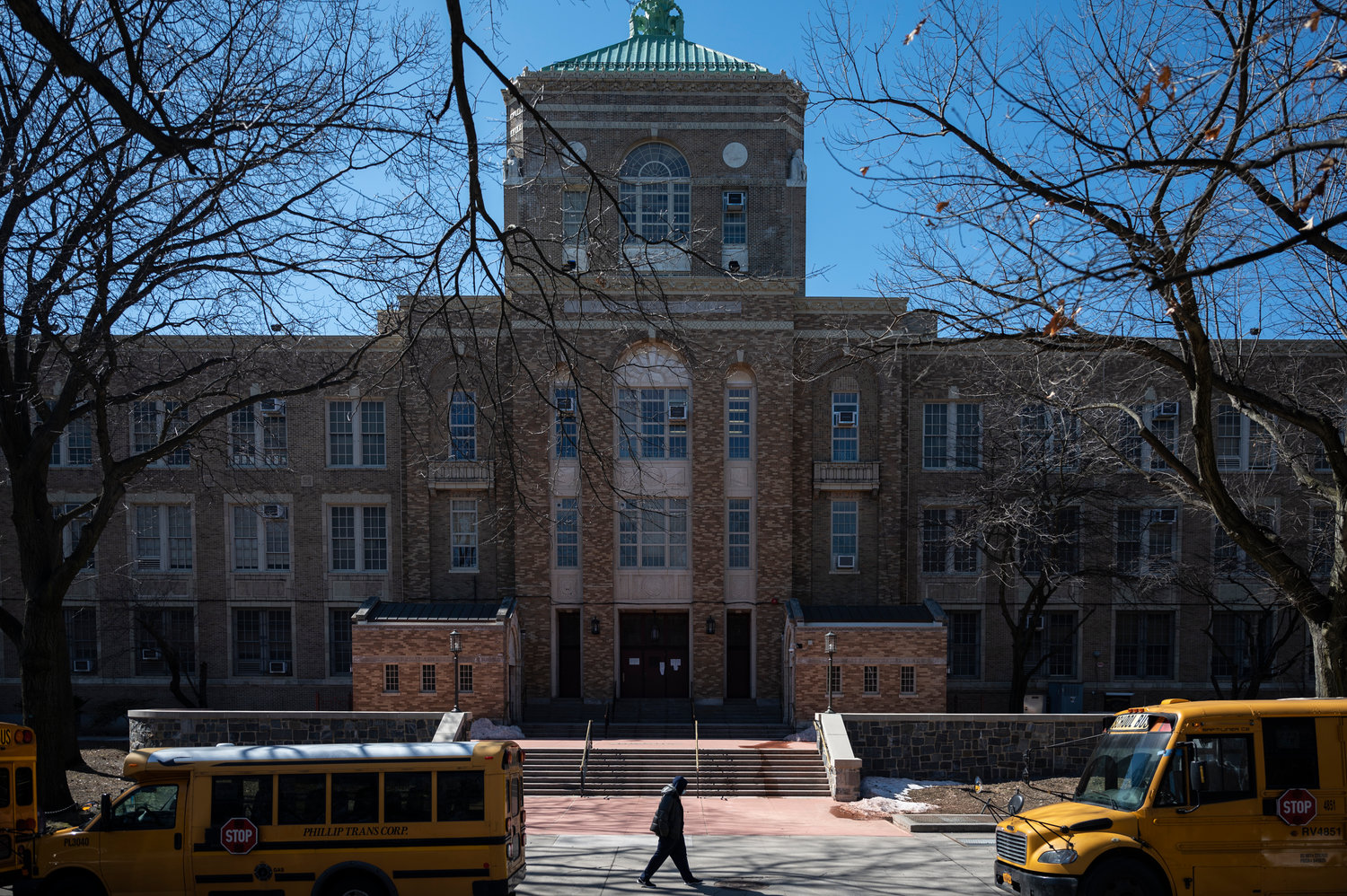 Although students spent many months not learning in-person at DeWitt Clinton High School, some of them spent that time still making waves — or, more aptly, airwaves. Governor’s Podcast — the product of Clinton’s newest club — is available on most major podcast streaming platforms.
HIRAM ALEJANDRO DURÃN 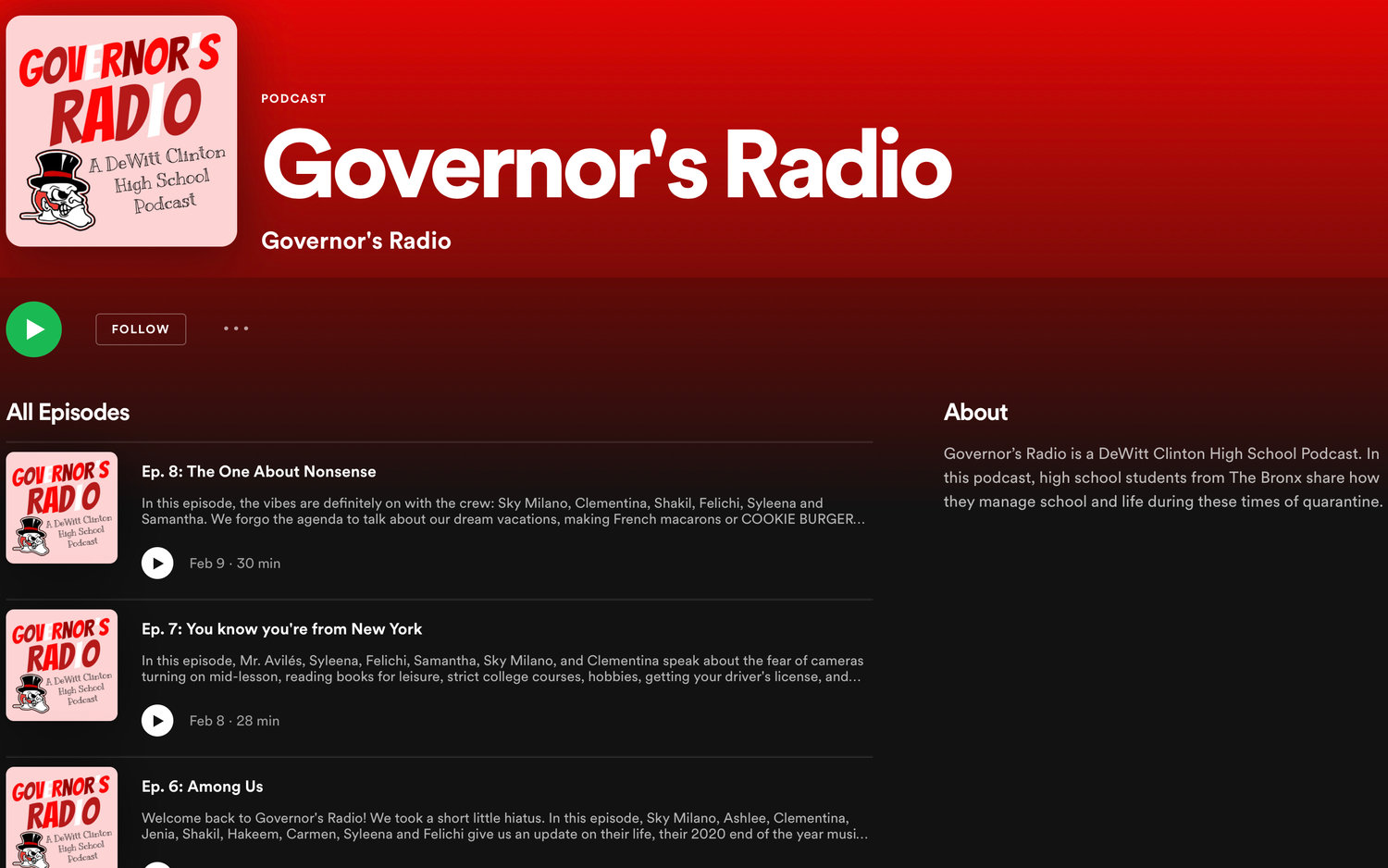 Governor’s Radio — the product of DeWitt Clinton High School’s newest club — is available on major streaming platforms like Spotify and Apple Podcasts. Many of the student broadcasters say they are excited about the wide reach their work could have both now and in the future.
HIRAM ALEJANDRO DURÃN 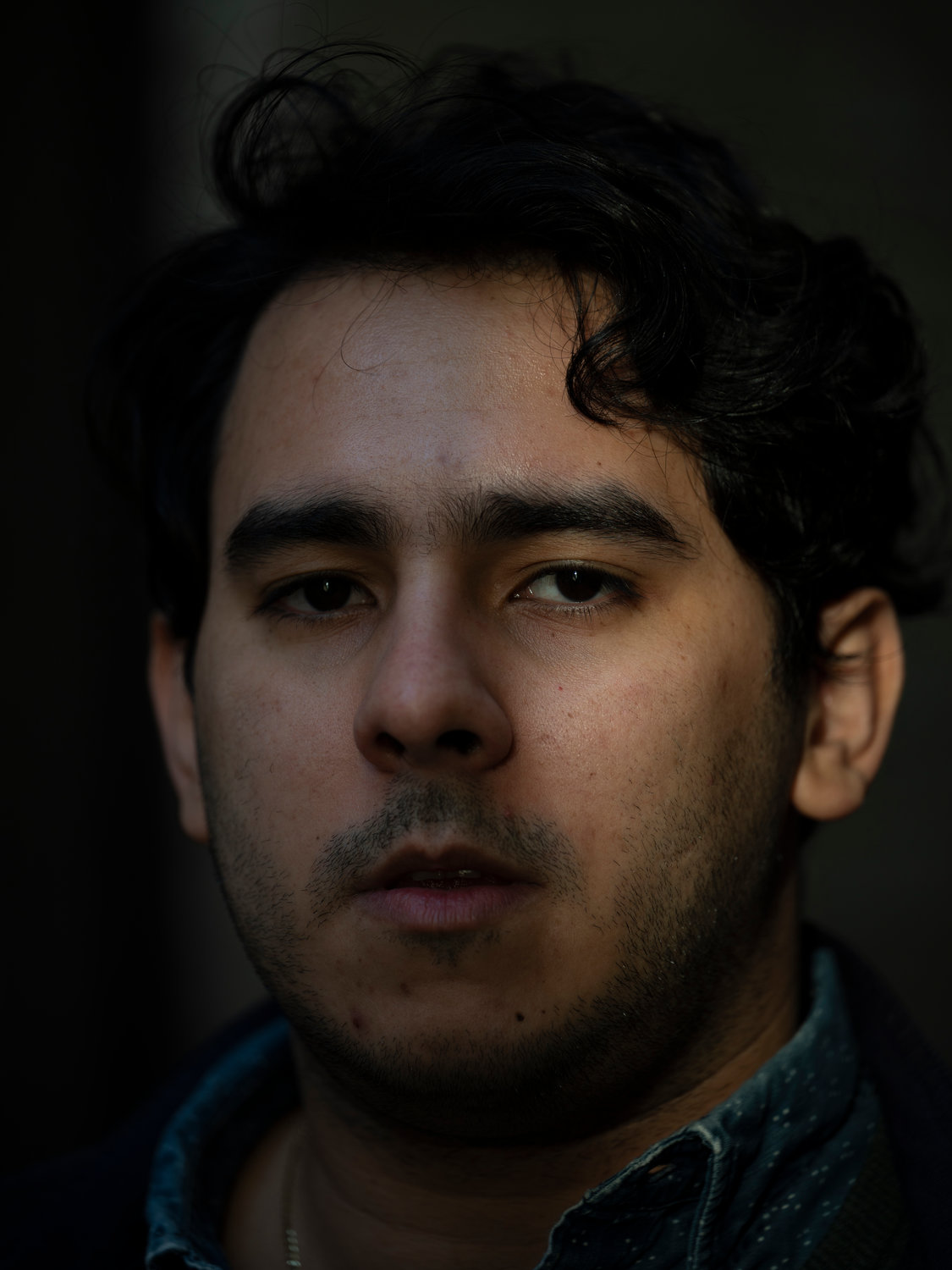 Christian Aviles hopes DeWitt Clinton High School’s podcasting club — Governor’s Radio — will provide students with both an outlet to share their experiences during COVID-era learning and a venue to still make connections with each other.
HIRAM ALEJANDRO DURÁN
Previous Next
Want to tune in?

You can also listen to the latest episode directly on the podcast’s website at GovernorsRadio.buzzsprout.com

The past year has felt like a history Regents question come to life for Sky Torres. But there could be a lot less guesswork for that inevitable test question thanks to the endeavors of her fellow classmates at DeWitt Clinton High School.

Each Friday, Torres and her peers hop onto a videoconference through Google Meet. Sometimes there’s a planned topic. Sometimes they go off on tangents and talk about whatever they feel like. But there’s always the possibility it will end up online for the world to hear.

Yet that’s just par for the course when you’re a podcaster.

Clinton’s podcasting club — Governor’s Radio — is a relatively new endeavor, born in the midst of the coronavirus pandemic. And for many of the students involved, it’s become a way to connect with their academic community — especially when they’ve spent the better part of the past year learning remotely.

There are a lot of emotions that come with that experience — apathy, loneliness, even sadness. And while Governor’s Radio became a place to share those emotions, it also became a way for students to joke and laugh with each other in the same way they normally could in the lunchroom or schoolyard.

And for Spanish teacher, club adviser and podcast editor Christian Aviles, that’s the beauty of having the platform.

“We decided that we needed a space where kids could freely express themselves,” Aviles said. “And we knew that some kids would benefit from this sort of narrative thing where they could just talk about whatever they would like to.”

Syleena Williams joined the podcast just to have something to do outside of her studies. The junior transferred to Clinton about six months before the pandemic closed the school buildings, meaning she didn’t really get a chance to know many of her classmates.

Williams thinks she’s fairly social, but she likes to get to know people before she really opens up. And Governor’s Radio allows her to do just that.

“This is an outlet for me,” Williams said. “I’ve always seen people do podcasts and talk about anything that they wanted to talk about. So I thought being able to do that may inspire me to do my own (podcast) someday, because it’s been on my mind for a while.”

For Sky Milano, there’s a very clear line between speaking at school and speaking with her friends. But the line gets blurred on the podcast, allowing the sophomore to be more open with her peers and her teachers.

The common narrative among the podcast’s contributors seemed to be giving the introverted a voice. Even if they don’t speak up in class very often, they still have complex and nuanced feelings about their high school experiences — whether it’s missing out on a traditional homecoming weekend, or staring down the barrel of college applications.

And for Clementina Sarpong, the podcast can be both a place to talk about those things and a place to forget about them for a while.

“It was already hectic with all the extracurriculars I had before, and I had to do college applications,” the senior said. “Because this was at the end of the week, it felt like a nice cooldown to just either vent or just hang out with people virtually.”

Aviles’ fellow faculty advisor, history teacher Rafael Erazo, might be used to document-based questions in the classroom, but noted how podcasting could be a new way of learning about a historical moment. And if future history students wanted to know more about what it was like for their peers from the past to live through the coronavirus pandemic, they’d need to look no further than Governor’s Radio.

“We’re documenting history,” Erazo said. “Thirty years from now, someone’s going to listen to this podcast, and you’re going to get firsthand knowledge — a primary source.”

While she might not be thrilled about potentially becoming the subject of future standardized test questions when it comes to the pandemic, Torres is excited about the permanence of a project like Governor’s Radio. One day, the pandemic will end. And while it may not be a happy experience now, she’s excited to share it with someone who didn’t witness it firsthand years down the line.

Because while other historical documents might get misplaced or damaged, the internet is forever. At least so it seems.

“A paper can get lost in storage, it can fly away, it could be ruined from a cup of coffee,” Torres said. “This is on the internet for a while. And I think that’s super cool, because I could be like, ‘Hey, kids! I did this!’”