Rats move out of shadows, into daily life at reservoir 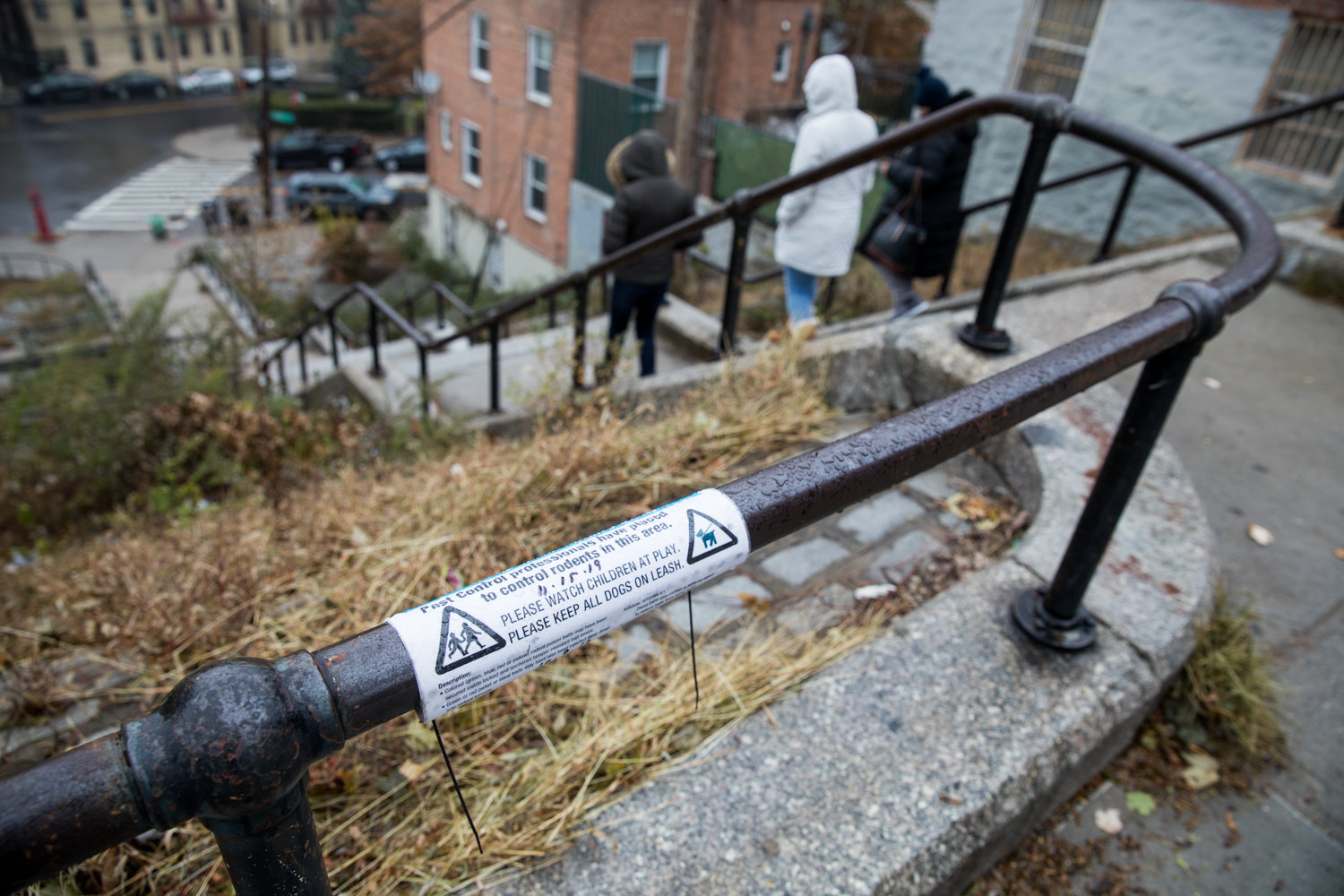 Pedestrians walk down a step street connecting Cannon Place to Orloff Avenue that has been treated with rat poison.
JULIUS CONSTANTINE MOTAL 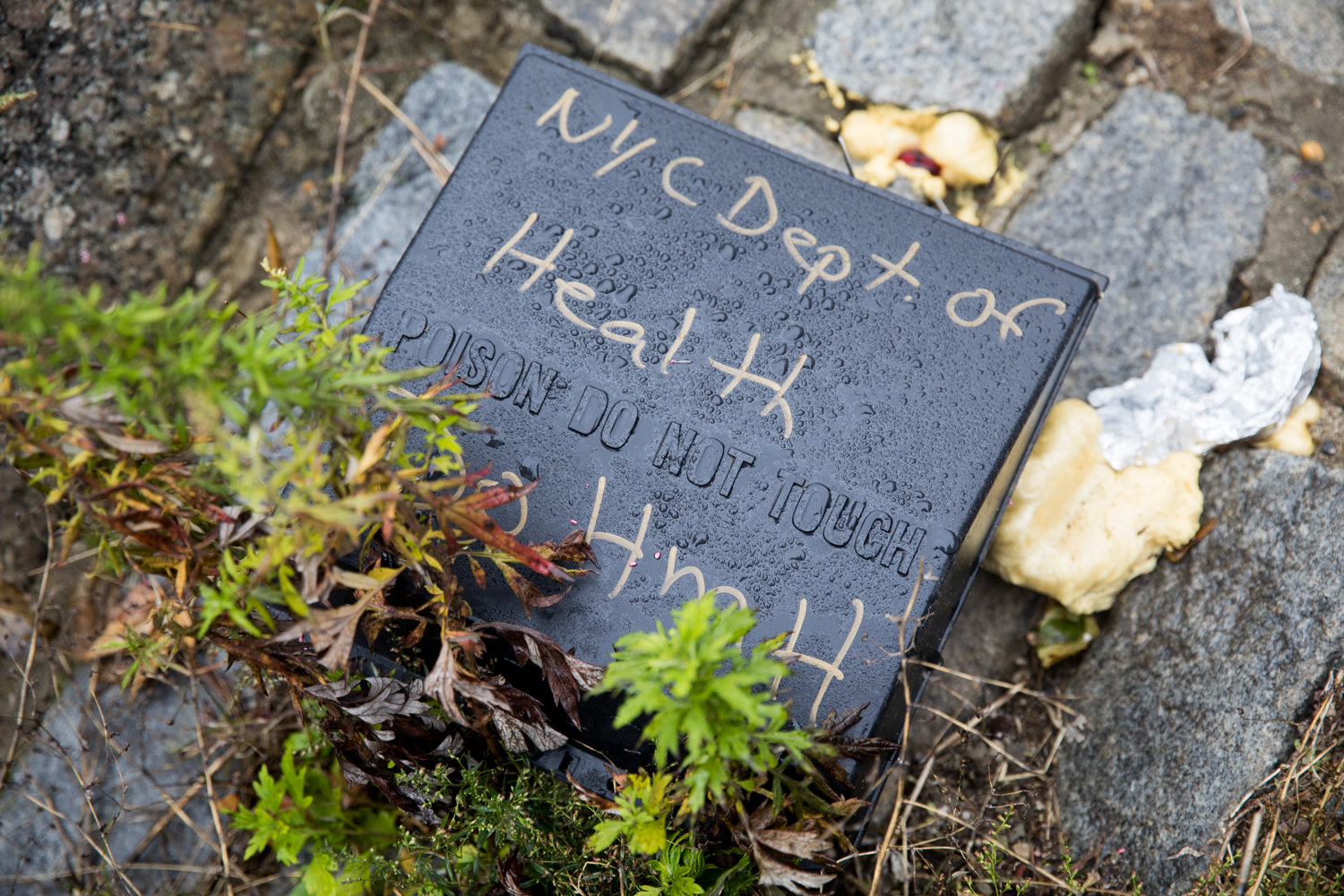 A bait rests on the ground along a step street connecting Cannon Place to Orloff Avenue. The city’s health department placed baits in the area to combat the rat population there that has drawn complaints from neighbors.
JULIUS CONSTANTINE MOTAL 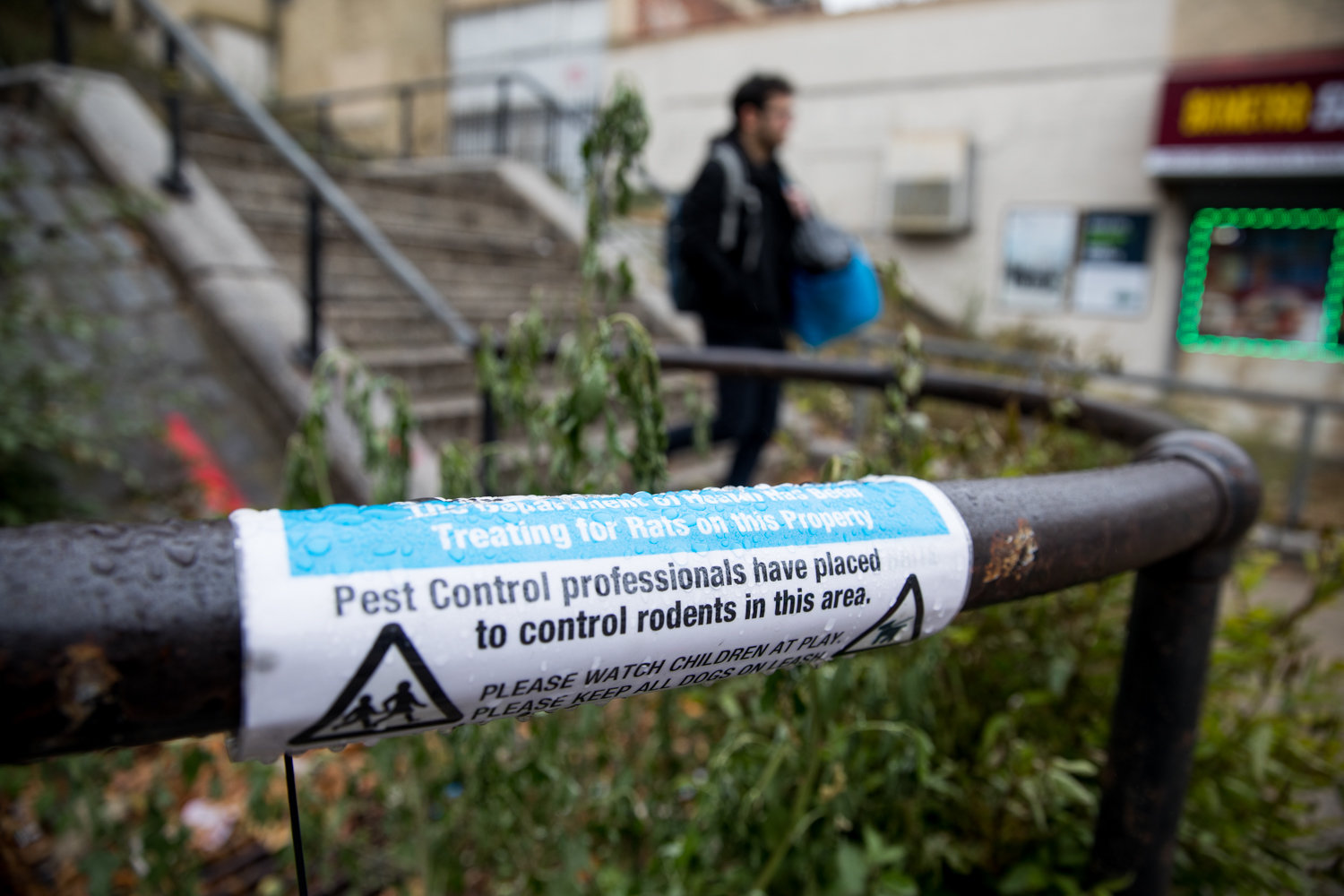 A sign affixed to a handrail along a step street between Cannon Place and Orloff Avenue indicates the area has been treated with baits in order to combat the rat population.
JULIUS CONSTANTINE MOTAL 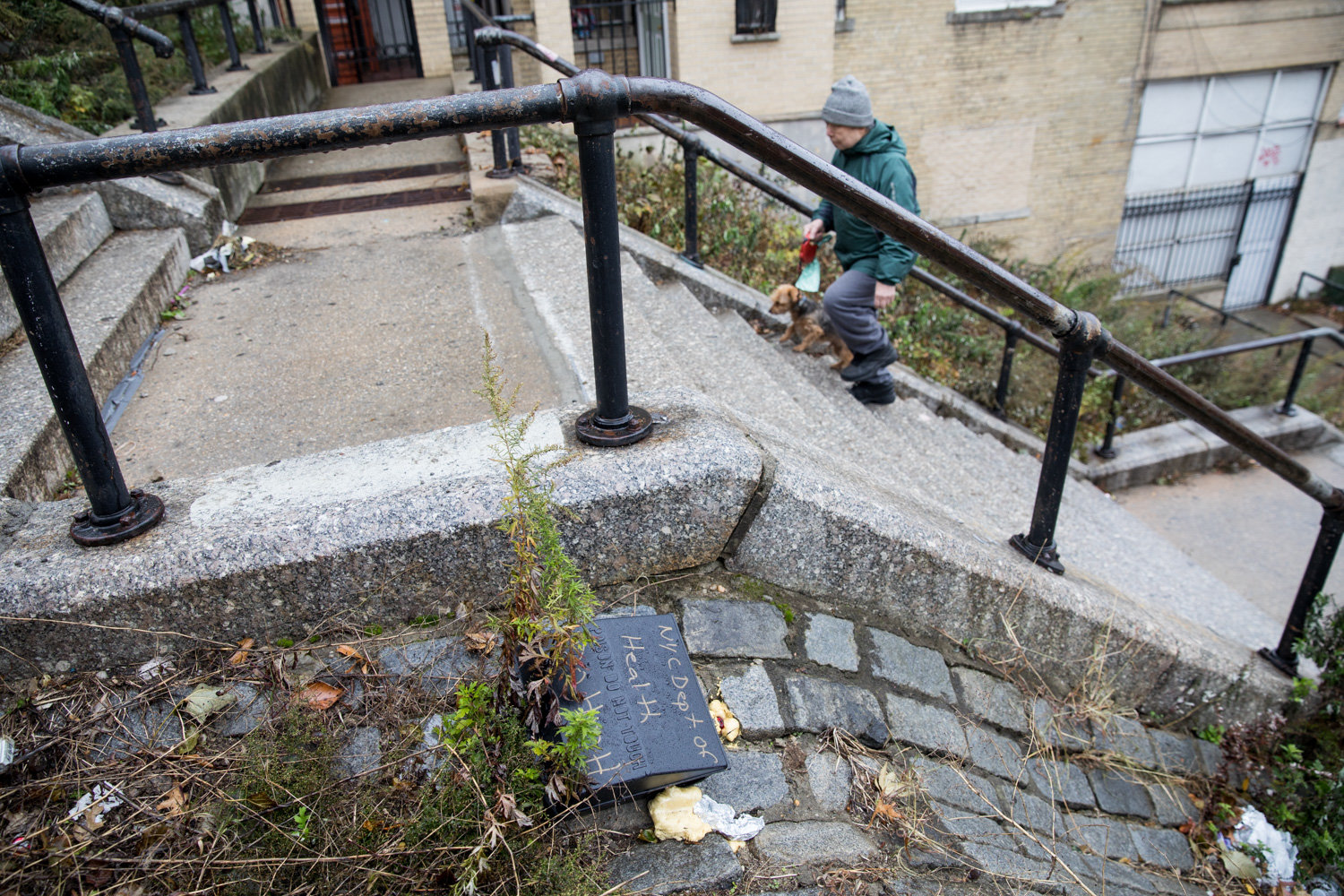 A pedestrian walks up a step street toward Cannon Place where baits have been placed to combat the rat population.
JULIUS CONSTANTINE MOTAL
Previous Next
By HEATHER J. SMITH

Rats are about as New York as Yankee Stadium, a dollar slice, or getting excited over a clean subway car. They’re everywhere — so much that you barely notice when they scuttle from view around a corner, down the storm drain, or from one pile of sidewalk garbage on pick-up day to the next.

Until, of course, you see rats everywhere.

“I feel like, in the past, I didn’t really see that many running across the street,” Margaret Groarke said. “And now I do on several occasions. Other people tell me they do too.”

Groarke, president of the Fort Independence Park Neighborhood Association, says she saw rats chilling on the West 238th Street step street on her way to work on two different mornings the previous week. The areas on either side of the steps are in dire need of regular cleaning — meaning it’s a great hangout for rats. Trash and weeds provide cover. Undisturbed areas mean rats can navigate well-worn trails by smell instead of using their weak eyesight.

“The reports that I received (about rat sightings), for the record, were from community members in Fort Independence,” said Robert Fanuzzi, chair of Community Board 8’s environment and sanitation committee. “They were from 311 calls and anecdotes of people being shocked when encountering large rats. There hadn’t been a history of seeing rats in the area. These sightings coincided with the start of construction up at the reservoir.”

Work began in January to improve the security perimeter and the gatehouses — where water flows into the 114-year-old drinking water reserve. The work was ordered by the city’s environmental protection department, which controls the city’s water supply.

Construction is ongoing, slated to end in 2021.

Neighbors suspect equipment stored on the site provides a safe haven, and the disturbance of soil and structures around the reservoir displaced the existing rats further afield.

More rat sightings meant more 311 calls. When there were enough reports, the city’s health department got involved, sending inspectors out to look for areas conducive for rat inhabitation. Where applicable, inspectors sent property owners letters asking them to make a list of changes. If those changes weren’t done within a certain amount of time, the health department sent violation letters, according to Martha Morales and Erica Peralta-Downing, representatives of the health department who spoke to members of CB8’s health, hospitals and social services committee Nov. 13.

Health officials take note of all rat reports, but a remarkable number of calls have come from CB8 in the last year, Peralta-Downing said. Officials told residents to give specific locations — whether it’s an address, intersection or landmark — so inspectors could follow up.

“But what if the problem is the building next door to the one cited?” board member Tao Moran asked. “What if the health department comes out and determines the cause of the rat infestation is not that property, but the property next door?”

Rats are rarely just one neighbor’s problem, Peralta-Downing and Morales explained. They’re not solitary creatures — where there’s one, there’s likely a whole colony. They also travel. Droppings can reveal how far and where rats go to find food.

“My rat is also your rat,” Morales said. “And his rat is down the block right now.”

Much of the northwest Bronx is city property, board member Martin Gluck said. Van Cortlandt Park, neighborhood parks, NYCHA buildings, roads and Jerome Park Reservoir are all part of the city’s holdings.

“There are a lot of schools in the neighborhood,” Gluck said, “and they put the garbage right out in the street on a daily basis.”

The health department works with its sister agencies to keep rats under control, Peralta-Downing said, but its inspectors don’t issue violations and fines like it does to private landowners.

But what is the health department doing to address the rats infesting the area near the reservoir, asked CB8 vice chair Laura Spalter.  The rat problem is only growing around the reservoir, and the city should hold itself to the same kind of requirements as ordinary residents, she added.

Morales explained that everyone is required to hire a licensed exterminator when demolition is involved, but not construction.

But with the case of the reservoir construction, “who’s going to hire the exterminator since it’s not a private landlord?” Spalter asked.

The environment and sanitation committee was likely to pass a resolution during its Nov. 20 meeting, Spalter said, asking the city to address rats living in the construction area at Jerome Park Reservoir specifically.

While the community doesn’t want the city’s environmental department to get into the extermination business, Fanuzzi said the rat population must be addressed soon.

“So we don’t want DEP to become the department of health,” he said. “We want them to tell the contractor to do what they’ve done in the past and address the rats.”