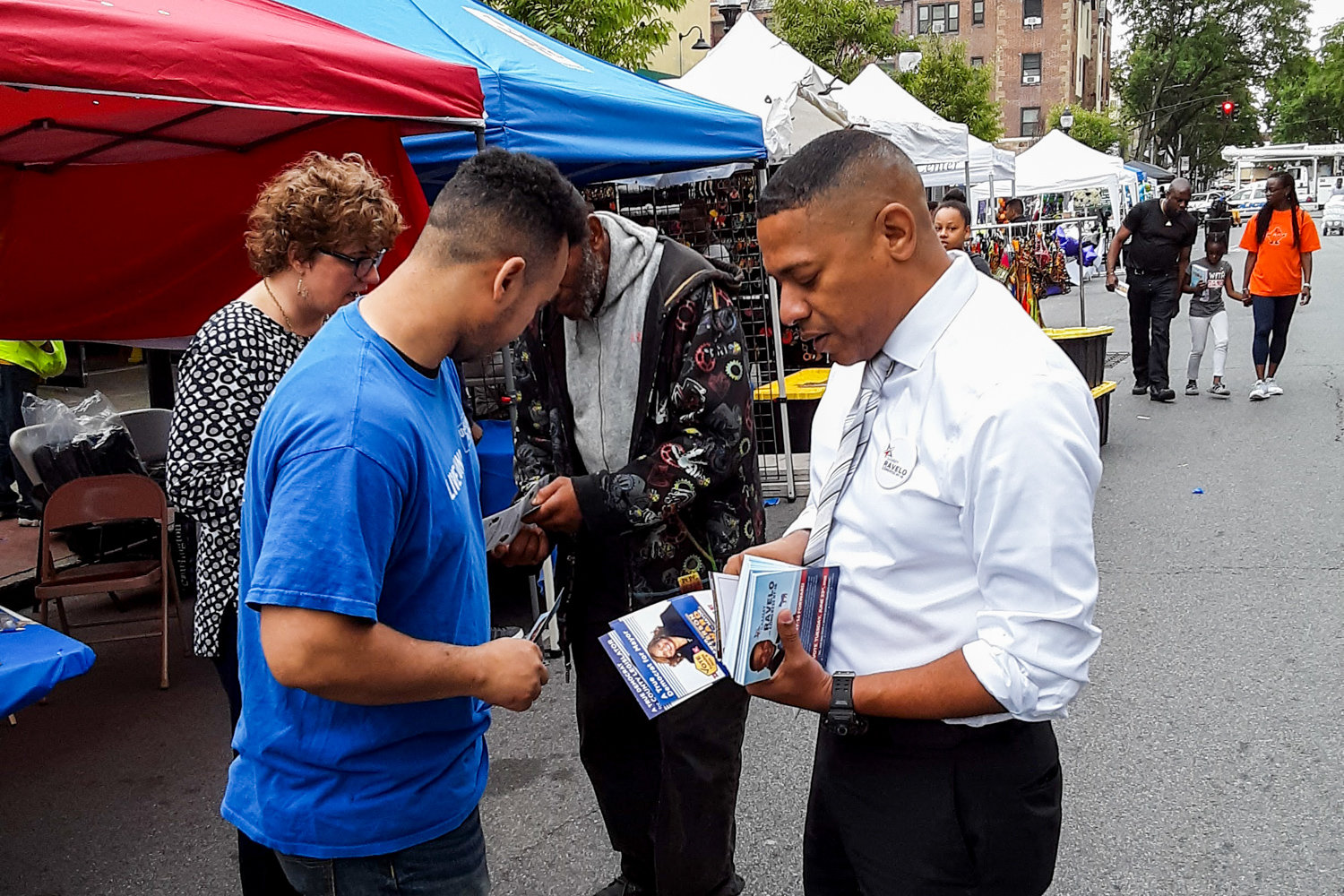 Sammy Ravelo, right, sifts through campaign materials as part of his bid to unseat U.S. Rep. Eliot Engel in the upcoming Democratic primary. Ravelo is in a crowded field of insurgent challengers alongside Andom Ghebreghiorgis and Jamaal Bowman.
Courtesy of Sam Ravelo 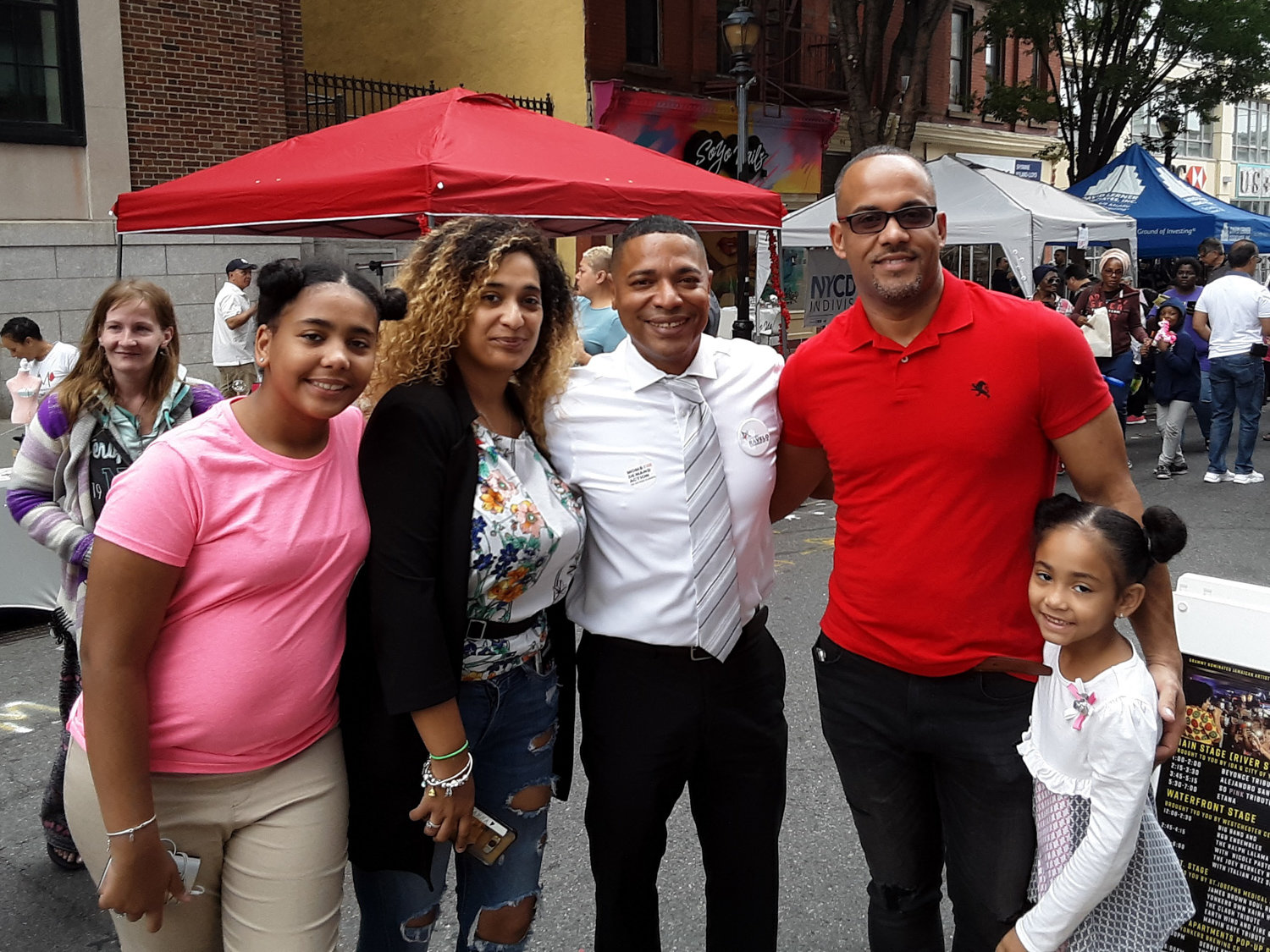 Political newcomer Sam Ravelo, center, hopes to unseat U.S. Rep. Eliot Engel in the upcoming Democratic primary, but he’s up against strong contenders, including Engel himself.
Courtesy of Sam Ravelo 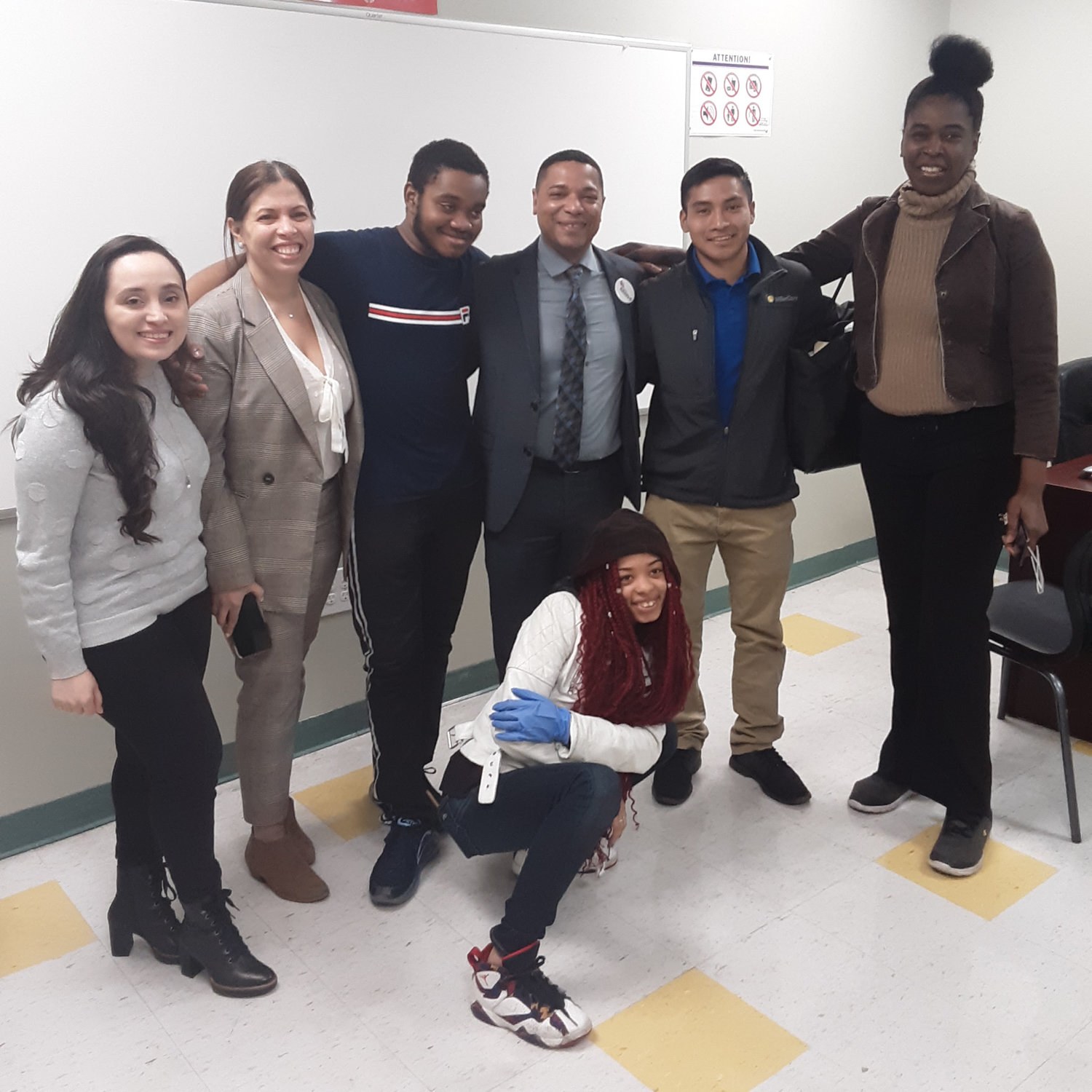 Sam Ravelo, center top, has made funding for education and universal basic income — in other words, providing basic financial stipends to average families — central to his campaign in the Democratic primary against U.S. Rep. Eliot Engel.
Courtesy of Sam Ravelo 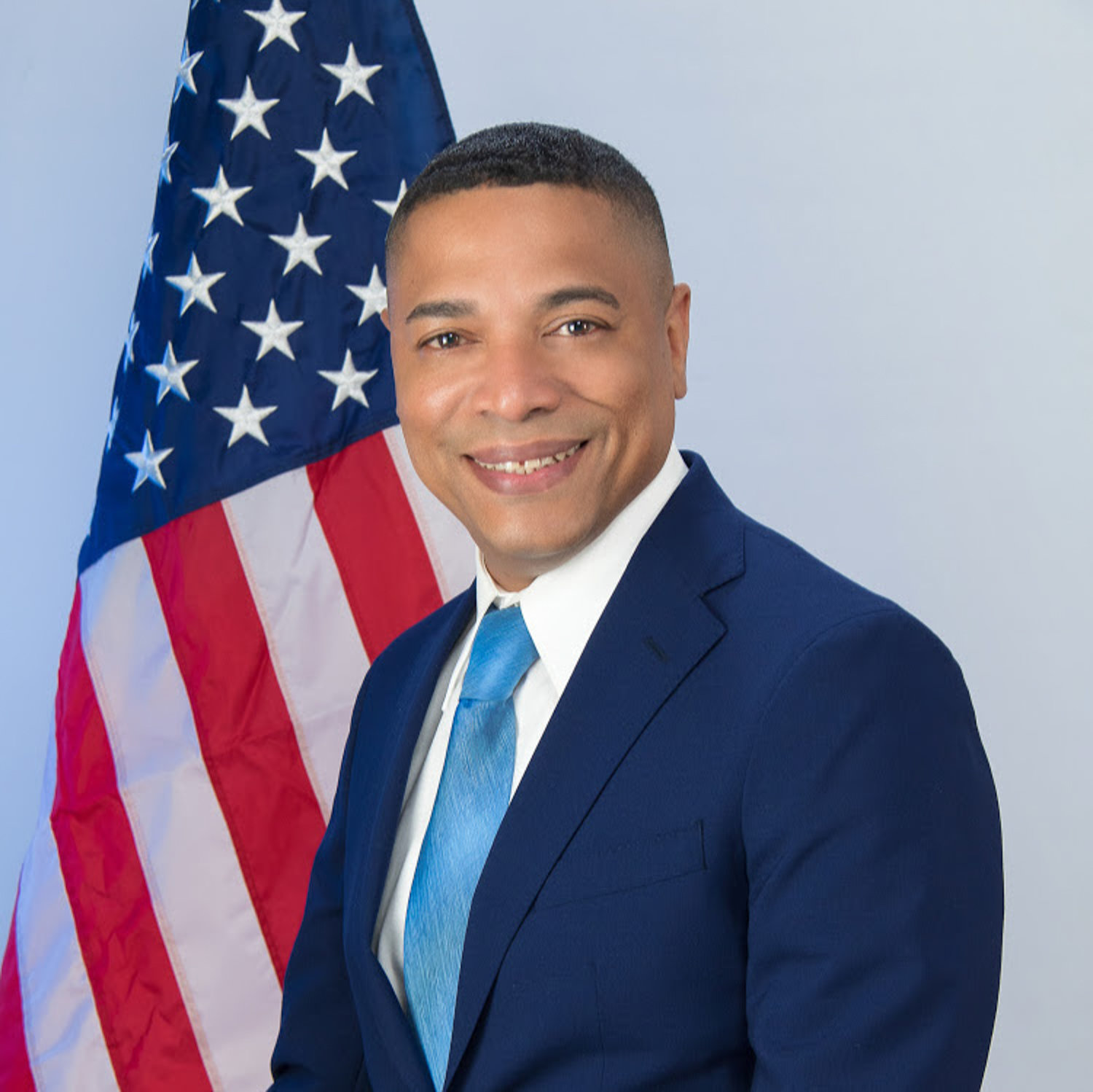 Sammy Ravelo is new to running for political office, having previously served in the U.S. Navy and spending time as an officer with the New York Police Department. He’s hoping to unseat U.S. Rep. Eliot Engel in the upcoming Democratic primary.
Courtesy of Sam Ravelo
Previous Next
Decision 2020 Sammy Ravelo

PRIMARY ISSUE: 'I am passionately fighting for education because a country that does not educate their treasure is a country that will eventually fail. We need to educate our future.'

The Democratic primary is coming up on June 23, but the months leading up to it have been full of electoral drama.

So, whom are you voting for, and how can you do it?

A federal judge has ordered the presidential primary is back on, so you’ll see Joe Biden and Bernie Sanders at the top of the Democratic ticket. While Sanders has dropped out of the race, he remains on the ballot in an effort to pull in more delegates — and expanded influence — for the Democratic National Convention’s platform creation.

You’ll also see state-level races — the senate and Assembly — as well as for other federal offices, primarily in the U.S. House of Representatives.

Many of those candidates will be profiled in The Riverdale Press in the weeks leading up to the primary, but beware that some candidates may not be in districts representing you. Sample ballots showing who is expected to be running in your neighborhood are available at Vote411.org.

As for the actual act of voting, the state has sent absentee ballot applications to all registered voters. Completed application can be returned to the city’s elections board in the provided postage prepaid envelope, or completed online at Vote.nyc. It also can be completed over the phone at (866) 868-2692.

In-person voting is still an option, with early voting getting underway June 13.

After a lifetime living in the Bronx, attending Bronx Community College and working as part of the New York Police Department, Sammy Ravelo recently moved to New Rochelle from Morris Park with fiancée Mildred.

He’s achieved all that despite arriving in the United States as a teenager ahead of his official paperwork legally making that possible. And now, Ravelo is ready to overcome even more — including a crowded field seeking to represent New York’s 16th Congressional District in the upcoming Democratic primary.

Ravelo was born in the Dominican Republic, living there until he was 16, when his parents — already living and working in New York — flew him into the United States.

He graduated from the now-closed Walton High School in Kingsbridge, but almost had his academic career end there because he still didn’t have his immigration papers.

“I worked at all those jobs you get in the street,” Ravelo said. “It was a little easier in the ‘80s. I washed cars. I was in the supermarket when you bagged groceries. Pumped gas — a lot of people don’t remember that we used to pump gas here in New York.”

His experience growing up as an immigrant was one of the reasons he decided to run for office in the first place. Donald Trump spent the 2016 presidential election “maligning” immigrants, Ravelo said, which made him remember how grateful he was not only to live in the United States, but also the pride he felt having served in the U.S. Navy.

“I’m honored to serve the Latino community,” he said. “I consider myself an Afro-Latino person. It is underserved in this community, in this area, so I decided to continue my service.”

And when it comes to immigration, he knows firsthand how hard that can be — especially for young people under the protection of Deferred Action for Childhood Arrivals, who currently have no viable path to citizenship.

“They didn’t have a choice,” Ravelo said. “They came here when they were 2 or 3 years old. This is a country they’ve lived in their whole life. This is a country that they love, just like me. So that is very near and dear to my heart, because I understand. And I don’t believe that there’s anyone else who’s going to feel the passion about this that I do.”

Ravelo’s experience is a bit vaster than that, however. After his Navy service, Ravelo joined the New York Police Department, working his way up to lieutenant before retiring in 2018 after 25 years.

Seeing how crime is treated in the country, Ravelo is pushing a criminal justice reform policy that includes legalizing marijuana, reducing sentences for non-violent drug offenders, and getting rid of mandatory minimum sentencing for those same charges.

“The problem is that a lot of kids, mostly Latino and African-American, were falling into this circle, a vicious circle, going to jail for nothing,” Ravelo said. “Now, when they finally get their act together, they can’t get a job. We all know, especially if you grew up in the inner city, someone who smoked marijuana who wasn’t a bad kid.”

While working undercover in the ‘90s, officers just didn’t pursue marijuana offenses, he said. Jails were too full, and marijuana presented a low risk compared to harder drugs like heroin and cocaine.

“I’m going to profit, making sure kids go to jail — and stay in jail,” Ravelo said. “That one sentence alone says it all. That’s not what America is about.”

And then there’s universal basic income, a key tenet of one-time presidential hopeful Andrew Yang, whom Ravelo supported initially. Giving every American $1,000 per month, Ravelo said, is “our way out of poverty.”

That would mean eliminating “means-tested” programs, like welfare and housing vouchers, and using that money for regular stipends from the government, which would replace those needs. That policy, he added, could work hand-in-hand with universal health care.

When it’s all said and done, however, Ravelo’s biggest issue is education.

“First off, we have No Child Left Behind, but they left behind the money,” Ravelo said of the federal action intended to help economically disadvantaged children in schools. “We did not fund it.”

Ravelo wants more funding for all classes from kindergarten to 12th grade, while ensuring teachers are paid a better salary.

“But another thing that we are not talking about is the insane amount of debt that is being accumulated by our college kids,” Ravelo said. “Washington does not understand — and doesn’t get — that this is the next bubble.”

His older son, Sammy Jr., is a recent graduate struggling with his own loans, Ravelo said. Funding community colleges, trade and state schools; providing a free or cheap higher education; and expanding Pell Grants would all be on the table.

“A country that does not educate their treasure is a country that will eventually fail,” Ravelo said. “We need to educate our future.”