Ready for bridge toll rebate? Not quite yet 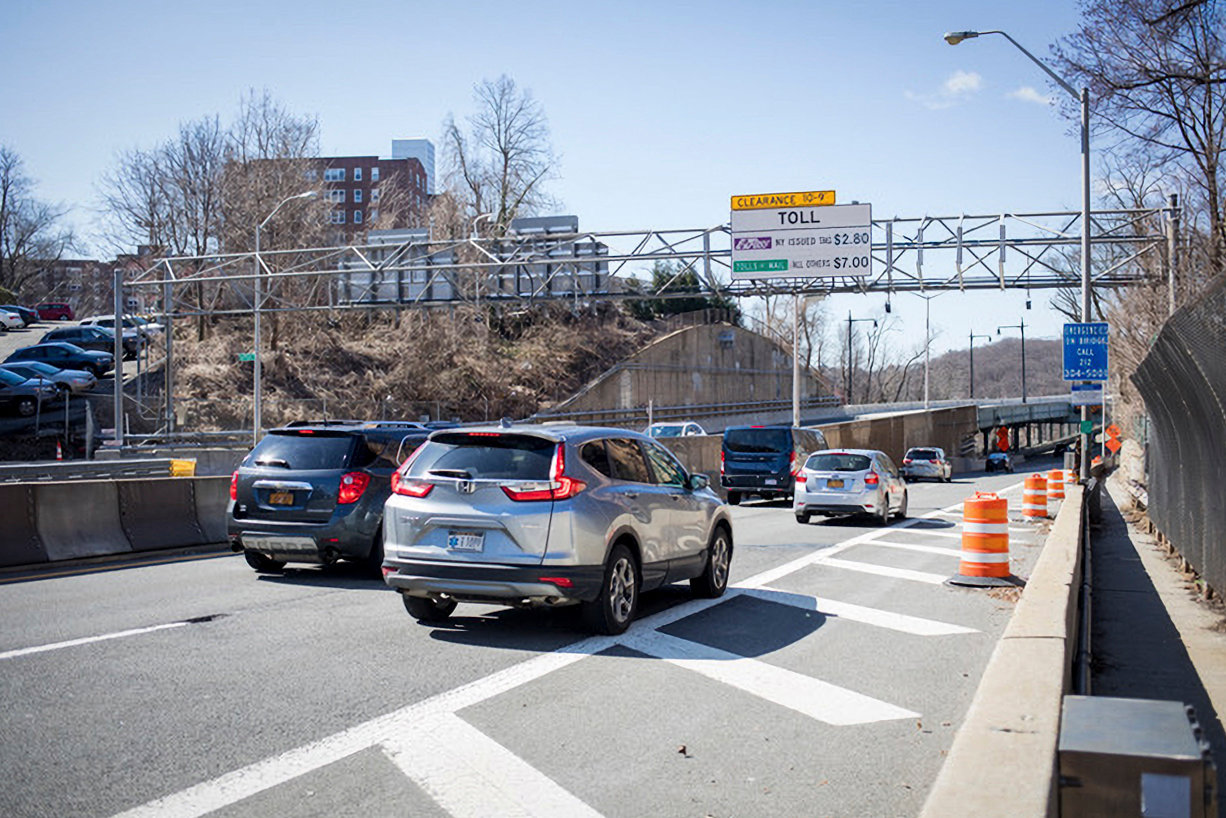 Transit advocate Danny Pearlstein says the Henry Hudson Bridge toll rebate, supported by Assemblyman Jeffrey Dinowitz, might actually help the city buses move more efficiently by lessening traffic on the Broadway Bridge. As with many of the MTA’s projects, this rebate program for Bronx residents was delayed indefinitely because of the budget hole caused by the coronavirus pandemic.
JULIUS CONSTANTINE MOTAL/ File 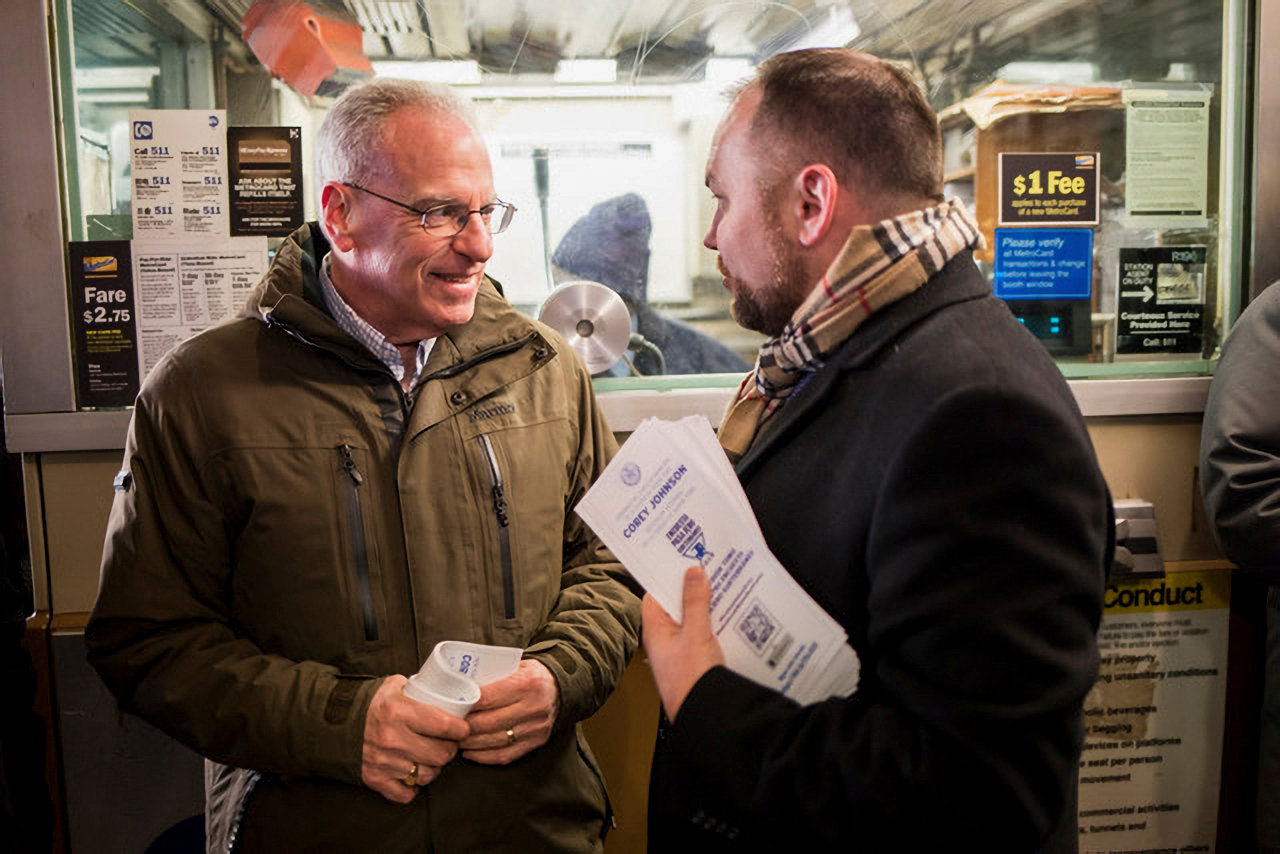 Assemblyman Jeffrey Dinowitz won a toll rebate for Bronx residents crossing the Henry Hudson Bridge in exchange for his support of congestion pricing in lower Manhattan. It was supposed to kick in a year ago, but was delayed indefinitely because of the coronavirus pandemic.
JULIUS CONSTANTINE MOTAL/ File 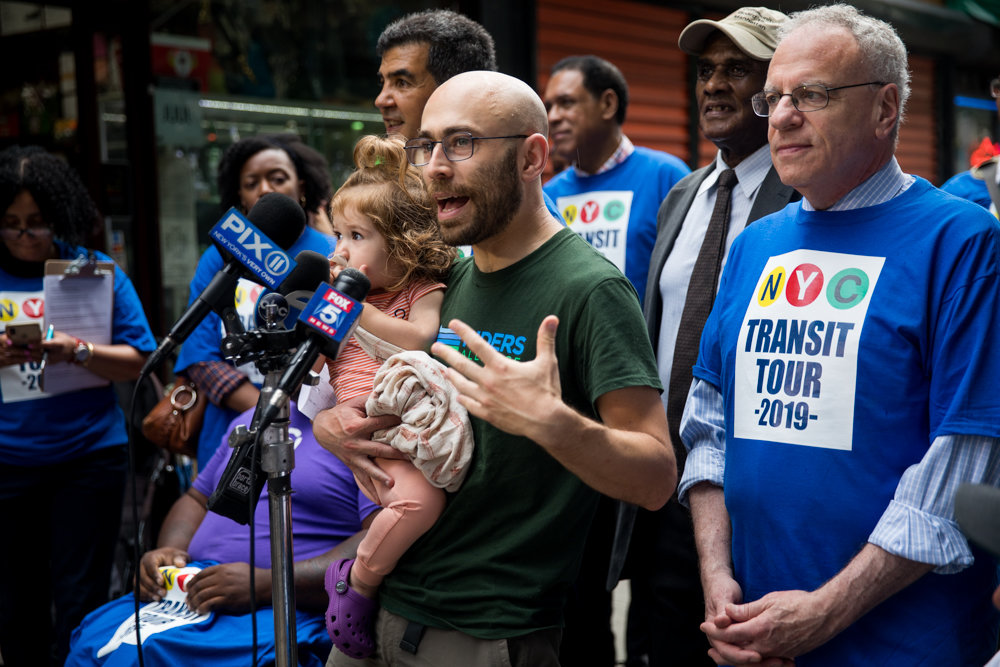 Danny Pearlstein, policy and communications director for Riders Alliance, calls on the Metropolitan Transportation Authority to do more to fix the city’s subway system at the start of the Riders Respond Transit Tour on Aug. 7. Pearlstein feels the MTA’s ‘cost neutral’ approach to fixing the borough’s beleaguered bus network will largely be ineffective.
JULIUS CONSTANTINE MOTAL/ File
Previous Next
By ETHAN STARK-MILLER

Remember way back in 2019 when Assemblyman Jeffrey Dinowitz made crossing the Henry Hudson Bridge free for Bronx motorists with an E-ZPass?

It was supposed to kick in a year ago. And those still paying the toll may wonder what happened. The answer, Dinowitz said, is simple: The coronavirus pandemic made the bottom fall on the Metropolitan Transportation Authority’s budget.

And there is no current timetable when the rebate might start.

“The only things I can tell people when they ask is that it’s my expectation that at some point in the future — without giving the dates, and I know that’s not satisfying to people, but it’s the best I can do — this program will be put into effect,” the Assemblyman said.

The rebate was supposed to allow any drivers of cars and E-ZPass accounts registered in the Bronx to have any toll incurred while crossing the Henry Hudson Bridge immediately refunded. Money for the rebate would come from the MTA’s Outer Borough Transportation Account — raised from a surcharge on ride-hail vehicles like Uber, Lyft and taxis operating below Manhattan’s 96th Street to fund transit projects in the outer boroughs.

But once the pandemic hit, ride-hail ridership plummeted, Dinowitz said, and there wasn’t enough revenue flowing into the outer borough fund to support the rebate. Even today, with the slow reopening, there’s still only a small fraction of the money coming in compared to before the pandemic.

The MTA had to put this and other related transit programs on the shelf indefinitely, Dinowitz said, until the agency solves its cashflow problems.

Until recently, the MTA was on the brink of financial collapse. That is until President Joe Biden signed the American Rescue Plan into law, which not only delivered assistance checks to many households, but also delivered more than $6 billion in federal aid to the MTA. The cash infusion allows the MTA to avoid threatened massive service and personnel cuts the agency said it would’ve been forced to make otherwise.

But even with that cash, Dinowitz said, the MTA has bigger fish to fry than supporting the outer borough fund right now.

“The money that’s coming from the federal government will deal with the much larger issues that the MTA has,” Dinowitz said, like the restoration of 24-hour subway service and repairing it’s decaying signal network.

“So, the fact that we were getting this huge influx of money, it’s not going to make us better off than we were prior to a year ago. But hopefully it will at least bring us back to where things can start to function in a reasonable way.”

Dinowitz struck the deal for the toll rebate in exchange for his support of a congestion pricing system in lower Manhattan. That system is designed to reduce the number of cars clogging up streets in that part of the city — but Dinowitz feared it would add more costs for drivers inside his Assembly district getting to work or doctor appointments downtown.

He believed he could eliminate some of that extra cost by wiping out the Henry Hudson Bridge toll — which is $2.80 with E-ZPass and $7 without. The bridge is operated by the MTA, and money from its tolls indirectly fund the city’s subways and buses.

Creating the toll rebate would cost the MTA roughly $6 million a year, Dinowitz said when he first brokered the deal in 2019. Assuming $2.80 per vehicle, that would equate to just under 6,000 cars a day — less than 10 percent of pre-pandemic traffic.

That just shows the bridge is used more by commuters from Westchester County and Connecticut, Dinowitz said, and that local residents shouldn’t be charged for driving across it.

Those who want to get into Manhattan without paying can use the nearby Broadway Bridge. But that means more congestion on Broadway, Dinowitz said, not to mention surrounding streets.

A report at the time from the transportation news and advocacy site Streetsblog argued the rebate was one of many carve-outs undermining congestion pricing by taking money away from the MTA that could be used for improving public transit service. They said eliminating bridge tolls also encourages more people to drive, thus reducing public transit ridership.

Danny Pearlstein — policy and communications director with the transit advocacy group Riders Alliance — said he had a similar reaction at the time.

“I think at first blush, people’s response was, ‘Well, that’s taking money away from transit and giving it to drivers,’” Pearlstein said. “Which seems like the opposite of congestion pricing.”

But after taking a more nuanced look at the rebate, Pearlstein realized there are a couple reasons why it’s actually not detrimental to public transit. The first is that Bronx drivers make up a small percentage of those crossing the bridge each year. The revenue lost from drivers getting the rebate is nothing more than a rounding adjustment when compared to the MTA’s overall $17 billion budget.

The more important benefit, however, is that the toll rebate could possibly improve MTA bus service in this corner of the Bronx. Theoretically, the free crossing could encourage more drivers to use the Henry Hudson Bridge instead of the Broadway Bridge, alleviating congestion in Marble Hill and Kingsbridge. This would make it easier for the Bx7 and the Bx20 — both of which use the Broadway Bridge — to run more efficiently.

“I actually think there’s a strong argument that this discount, although it’s most directly felt by drivers, can indirectly improve a substantial amount of bus service in the Bronx,” Pearlstein said. “So to the extent that we can keep people on the highway and avoid creating that congestion, we can help bus riders.”