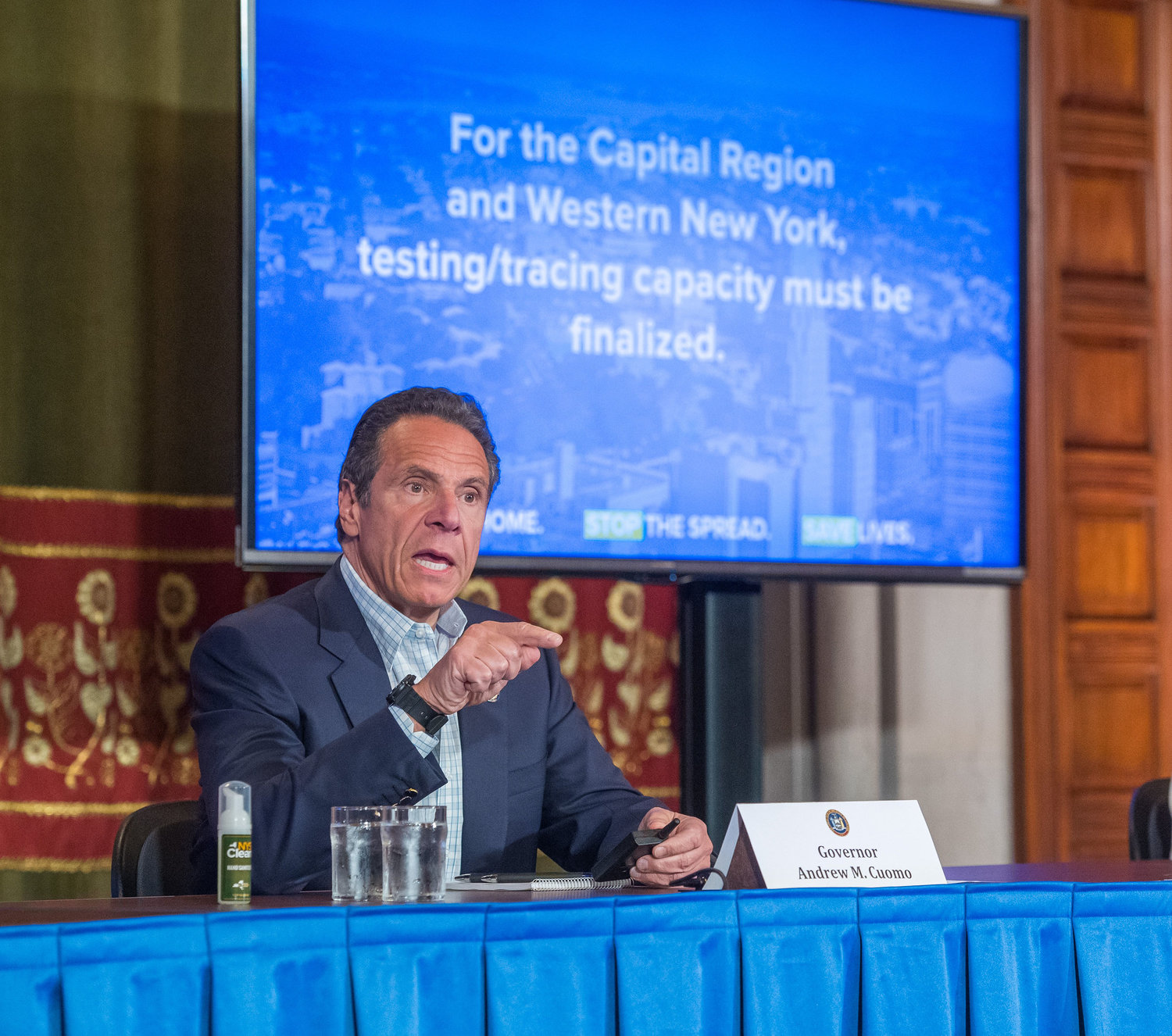 Gov. Andrew Cuomo says all of upstate New York is ready to open, leaving just a few more metrics for downstate areas like New York City to achieve before it can start reopening.
Courtesy of Darren McGee/Office of Governor
Support Local Journalism

Two more regions of New York are set to open — meaning that by early this week, three-quarters of the state will be in the first phase of reopening — but New York City and Long Island are still a ways off.

The Capital Region — including Albany and Schenectady — as well as Western New York — with the likes of Buffalo and Jamestown — are the latest poised to reopen this week, following large swaths of upstate last week that have met seven metrics in New York's battle to curb spread of the coronavirus that causes COVID-19.

"On the metrics, they are now qualified for reopening," Gov. Andrew Cuomo said Sunday during his daily coronavirus briefing. "There is still a need to increase the number of people prepared to do tracing, and that is a pure administrative function."

In fact, both the Capital Region and Western New York need nearly 900 people to help find out who those who have tested positive for the coronavirus may have come into contact with. When those people are identified, they can be quarantined until it's determined safe for them to return to society.

Both regions have most of the tracers they need, but the Capital Region is short more than 160 professionals to take on the work, while Western New York is down by a little more than 350.

"We'll be talking to the regional heads today to find those additional personnel and to get them trained and get them ready," Cuomo said.

While New York City is expected to have enough tracers when it's ready to reopen, there are still other metrics that haven't been met through May 16. Primarily, the number of new hospitalizations is slightly above the two per 100,000, and available hospital beds are still below minimums.

However, the city is close to meeting the 30 percent hospital bed threshold overall, but when it comes to intensive care unit beds, the city has just 24 percent available.

New hospitalizations are dropping in the city. With the release of the metrics last week, New York City had 2.54 new hospitalizations per 100,000. As of Saturday, it is down to 2.32. Hospital bed and ICU capacity is also up from 27 and 22 percent, respectively

Long Island is quite close to reopening again. New hospitalizations are down significantly, freeing up enough beds in both hospitals and ICUs to meet those specific metrics. However, the region's death toll is holding things back, with only four days of decline at 15 deaths per day. The state requires those numbers to be at least a 14-day decline, or less than five deaths per day.

Although New York City is averaging 41 deaths per day on a three-day rolling average, it has seen its death rate decline for more than a month.

Once the Capital Region and Western New York open this week, it will leave only downstate behind, as expected, since both New York City and Long Island were hit the hardest during the pandemic. The Mid-Hudson region — including Westchester and Rockland counties — also have yet to start reopening, struggling not only with its new hospitalizations — 2.41 per 100,000 people — but also its death rate of 11 per day, and just a two-day decline as of Saturday.

Like Long Island and New York, the Mid-Hudson region has had more than a month's decline of new hospitalizations, and even has half of its ICU beds open. Cuomo, however, says no region can reopen until it meets all seven metrics.

First phase of reopening includes construction, manufacturing, wholesale trade, select retail for curbside pickup, as well as agriculture, forestry and fishing, according to the governor's office.  Three later phases which allow for more openings will go into effect two weeks after the previous phase, provided each region continues to meet all seven metrics.

Once the Capital Region and Western New York begin the first phase, the only counties still waiting to get their start are Bronx, Kings, New York, Richmond and Queens counties in New York City, as well as Nassau and Suffolk counties on Long Island, and Dutchess, Orange, Putnam, Rockland, Sullivan, Ulster and Westchester counties in the Mid-Hudson region.

Bronx, NYC not ready to re-open quite yet