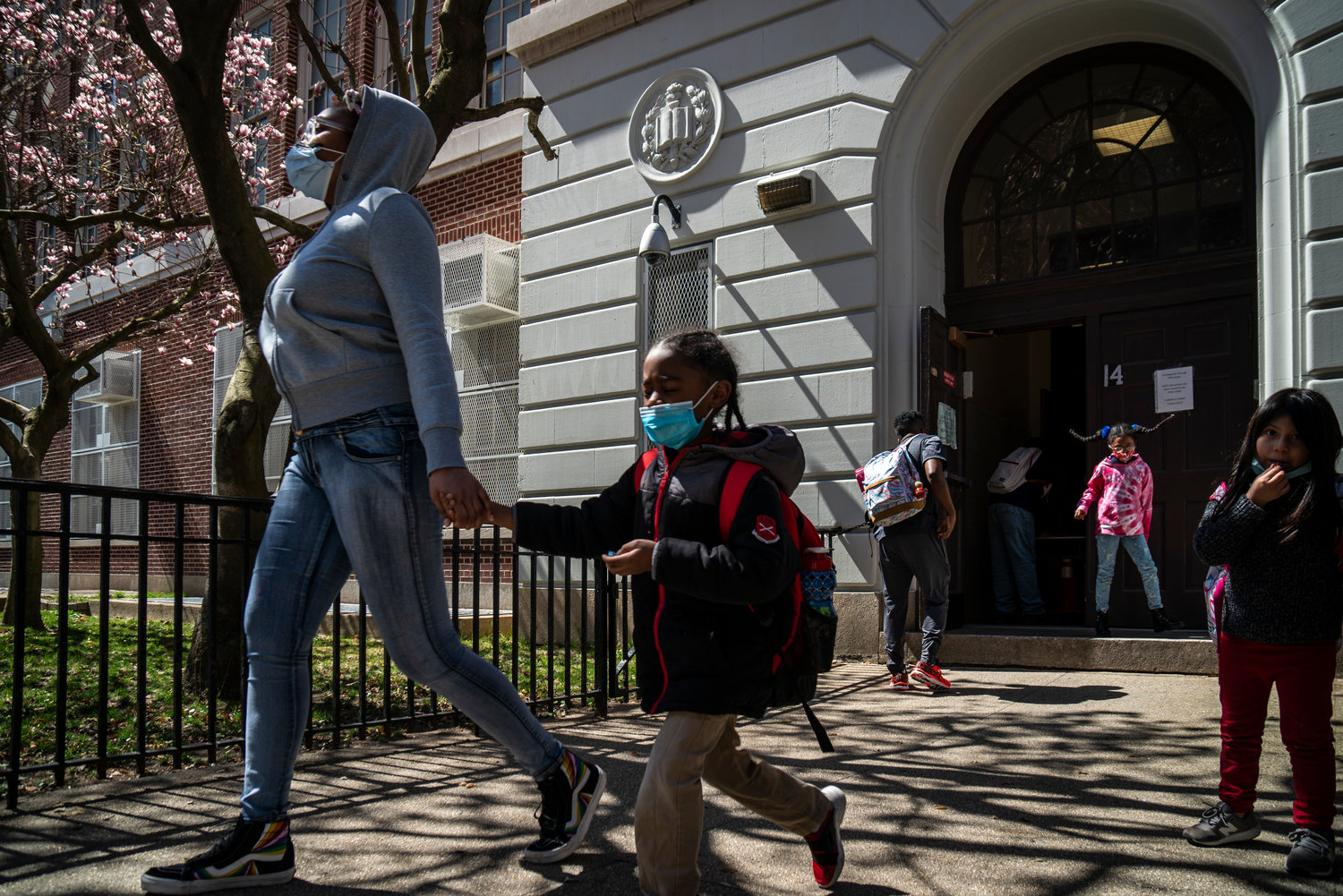 Under the city’s new guidelines, classrooms will still need to quarantine if even one person tests positive for the virus that causes COVID-19. However, the building itself will now only close if there are four or more confirmed cases in the school.
HIRAM ALEJANDRO DURÃN 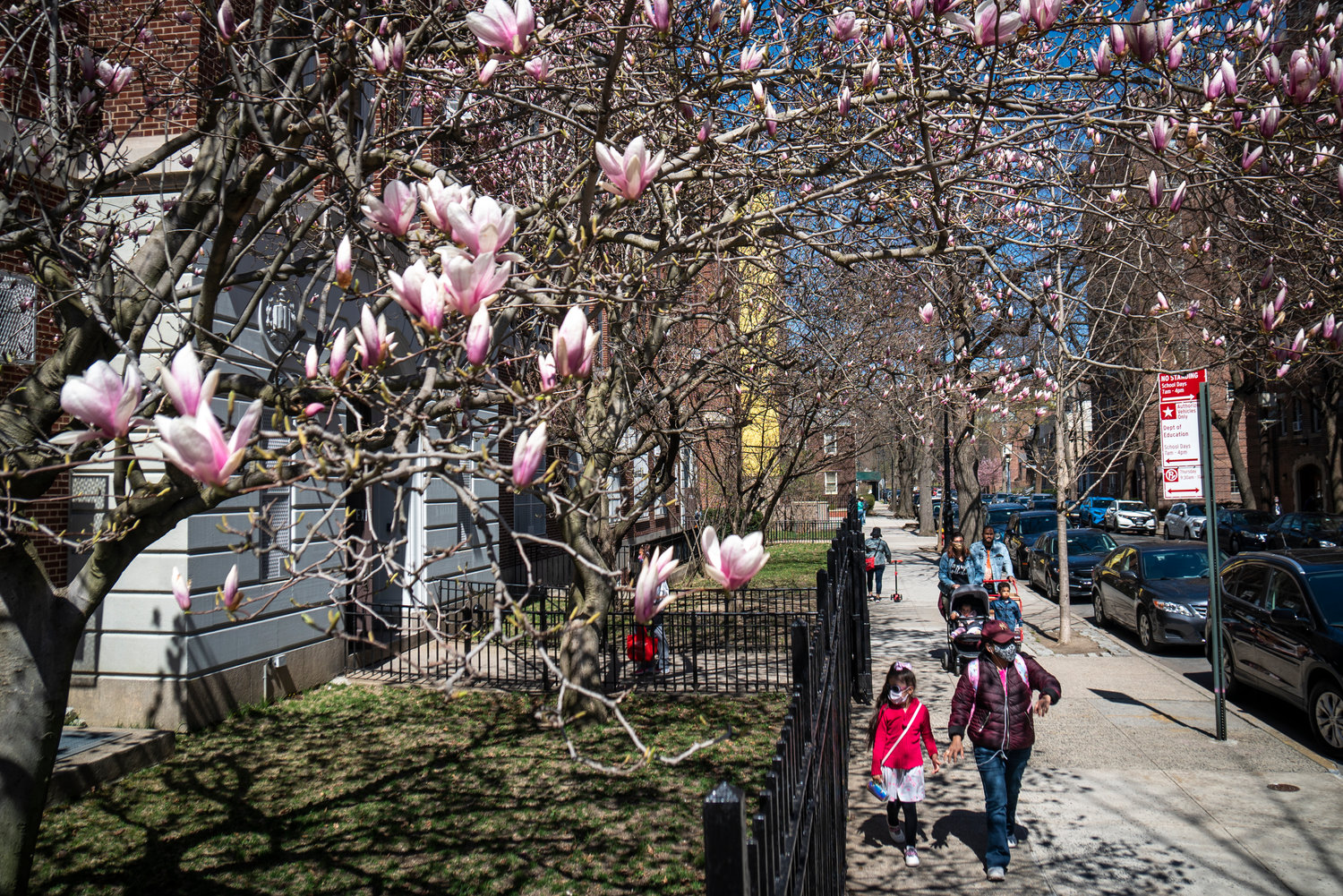 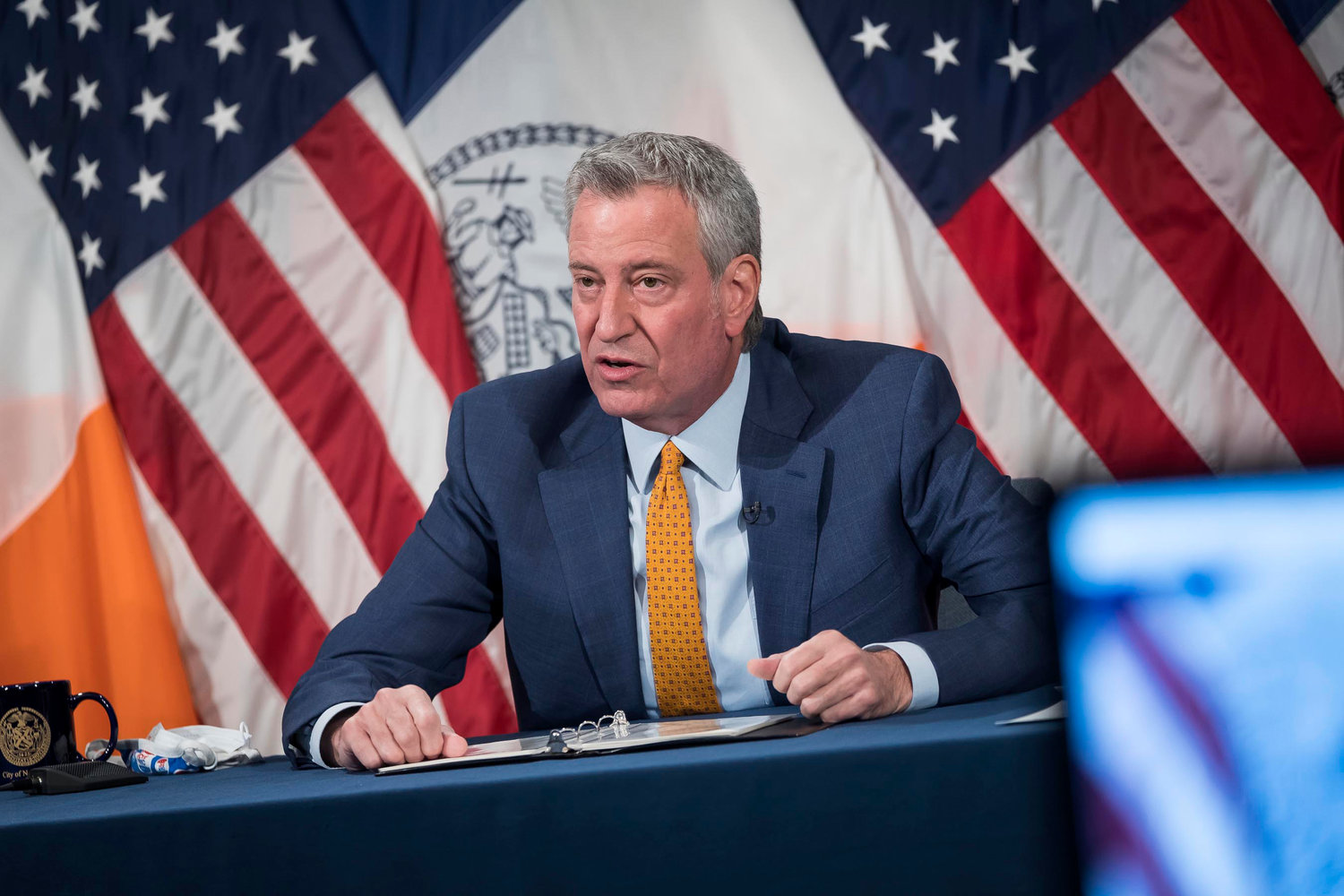 Mayor Bill de Blasio congratulated the city’s schools for vaccinating some 65,000 of the adults who work there. The city was able to relax school building closure policies, and now they will only need to close if there are four or more confirmed positive coronavirus cases in the building.
Courtesy of Ed Reed/Mayoral Photography Office
Previous Next
By ROSE BRENNAN

At one time, neither rain nor sleet nor snow nor hail could halt the nation’s postal service — or the operation of its largest public school system. But last year, something beyond inclement weather upended the educational system’s reputation for never closing.

And unlike snowstorms, the coronavirus pandemic didn’t have a forecasted end.

When school campuses physically reopened last fall, the criteria to reverse course and shut down again at either the classroom or school building level remained fairly consistent. If there were one or two confirmed coronavirus cases confined to a specific classroom, that classroom would need to switch to fully remote learning for 14 days. The building itself would close for 24 hours if two or more “unrelated” coronavirus cases were found in the school.

If contact tracing created more worries of further community spread, the school would close up to 14 days, although that eventually relaxed to just 10 days.

But as millions of vaccine doses are injected into arms — especially the arms of teachers — the time came for the criteria to close down a school building to change again. And that’s exactly what Mayor Bill de Blasio did again last week.

de Blasio did away with the so-called “two-case rule,” later unveiling a new program that appears to be less stringent.

The guidelines for classroom closures are the same — even one confirmed case means the class will go fully remote for 10 days. But if there are multiple cases that are not confined to one classroom, the guidelines change.

If there are two to three cases in a school building, its mandatory coronavirus testing procedures will expand to test more people. As of right now, mandatory weekly testing occurs randomly among 20 percent of the school population. If more testing is deemed necessary, that testing capacity can temporarily increase to 40 percent to gauge community spread.

Finally, a school building will temporarily close if four or more people test positive for the virus that causes COVID-19. And even then, this will only occur if the cases aren’t isolated to a single classroom or family.

These rules will allow schools to be more consistent in terms of keeping the doors open, de Blasio said. Schools closing less frequently means students will have more time in the classroom. But the city can afford to expand this risk primarily because more people are vaccinated, and health experts don’t see relaxing school closure guidelines much of a risk at all.

“This will help us have more consistency in school attendance and schedules (and) keep strong health and safety standards,” de Blasio told reporters last week. “Thank God we now have over 65,000 adults that have been vaccinated in our schools. That’s a great step, but we’ve really worked with the unions to figure out the right approach going forward.”

While the United Federation of Teachers ultimately agreed to the new building closure guidelines, that wasn’t always the case. When de Blasio initially announced the city would do away with the two-case rule — before he shared the specifics of the new guidelines — the teachers’ union was hesitant.

“A proclamation is not a plan,” union president Michael Mulgrew said, in a release. “Thanks to the effectiveness and availability of vaccines, the percentage of adults testing positive for COVID has declined. But students now account for two-thirds of the new infections.”

However, Mulgrew and the UFT ultimately changed their tune after more specific closure guidelines were released.

“With our increased knowledge about the spread of the virus — and as more teachers and other school staff have been vaccinated — our medical experts are convinced that the rule can be changed and still maintain safety,” Mulgrew said later that week. “While this is a step forward, the most important fact in the public school-opening debate is that the overwhelming majority — some 700,000 public school families — continue to opt for remote instruction.

“If we are going to have anything like a normal opening in September, the mayor needs to find ways to assure them that our COVID precautions remain strong and that schools are safe for their children.”

Some union leadership, however, still isn’t fully convinced the building closure guidelines are safe. Lydia Howrilka, leader of the UFT’s Solidarity caucus, wasn’t too keen about what she saw as the union flip-flop on the new guidelines.

“UFT Solidarity is greatly troubled by the inconsistency of our union leadership,” Howrilka said in a statement to The Riverdale Press. “There was never any rank-and-file vote or conversation about any of these changes. We have questions on whether this is legal in terms of what the state has decreed about school closures.”

Some are also concerned about virus mutations and the dangers they might pose to students back in the classroom. According to the Centers for Disease Control and Prevention, the United Kingdom variant — also known as B.117 — is now the predominant strain of the coronavirus in the United States. And not only is it more contagious and deadly in general, but it does seem to be infecting children and young adults at higher rates in the United Kingdom, according to NBC.

That’s still a concern, said UFT spokeswoman Alison Gendar. While the number of coronavirus cases in schools hasn’t changed significantly, the proportion of who’s testing positive has. More teachers and school personnel are vaccinated, and that means when the cases arise, more students are testing positive.

But the UFT hopes additional safeguards — like expanded coronavirus testing if and when there’s a positive case in the school — will help circumvent those risks.

“It’s … attempting to find a balance — to keep the safety, to keep the low rates within the school community, and then to really monitor when cases do arrive in the school, to contain whatever spread there might be,” Gendar said. “Aggressively contain it, and then monitor it, because there are a lot of unknowns on this.”

But Gendar noted that, throughout the pandemic, schools have had much lower positive test rates than their surrounding neighborhoods. And that’s something de Blasio also has touted — and he hopes the changing protocol reflects that.

“We set a gold standard from the beginning,” de Blasio said. “We said we would take the best health care practices from around the world (and) apply all of them in the New York City public schools. It has worked. They’re the safest places to be in New York City, literally.

“And we want to keep getting more and more kids back.”