Remembering a march, and an American dream 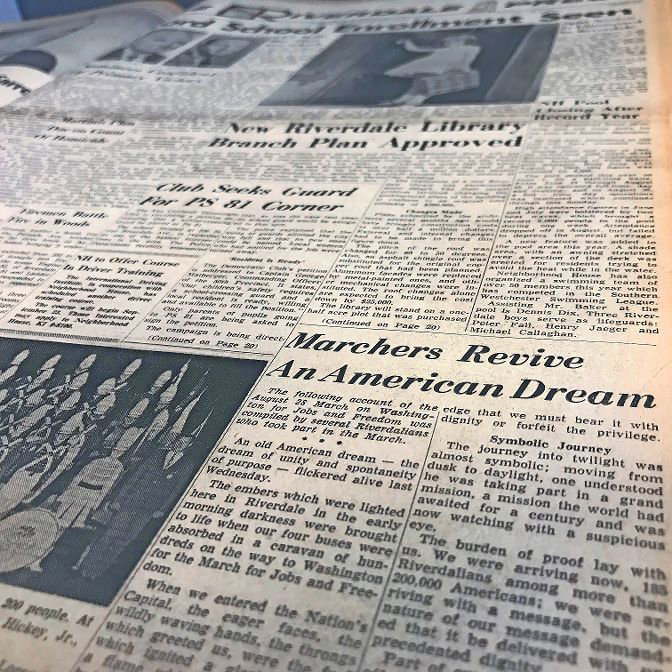 A recounting of the original March on Washington for Jobs and Freedom appeared on the front page of The Riverdale Press on Sept. 5, 1963..
MICHAEL HINMAN
By MICHAEL HINMAN

When Dr. Martin Luther King Jr., announced his original March on Washington in 1963, many might remember it for his famous “I Have a Dream” speech, but the original purpose was to fight for not only civil rights, but jobs as well.

Upward of 300,000 people crowded into the mall in front of the Lincoln Memorial — a crowd with such a commanding force, many directly credit it for the passage of the Civil Rights Act of 1964 the next year.

More than a half-century later, a new “March on Washington” came together in the wake of George Floyd’s death at the hands of Minneapolis police officers — this time led by the Rev. Al Sharpton and his National Action Network, along with the NAACP.

But in 1963, the Bronx sent a delegation to Washington, led by U.S. Rep. Charles Buckley, a few years before he succumbed to lung cancer. He was joined by future city councilman Edmund Farrell, as well as state Sens. Harry Kraf, Ivan Warner, Abraham Bernstein and Joseph Marine. Also coming along were Assembly members Donald Sullivan, Burton Hecht, Ferdinand Mondello, Aileen Ryan and Fred Eggert, as well as councilmen Leonard Fastenberg and David Ross.

They were part of nearly 200 from this borough alone who traveled together, and had a chance to witness history in the making.

Several days after the march, some of those who took part shared some uncredited thoughts with The Riverdale Press, which appeared on its Sept. 5, 1963, front page.

Here are their words:

An old American dream — the dream of unity and spontaneity of purpose — flickered alive last Wednesday.

The embers which were lighted here in Riverdale in the early morning darkness were brought to life when our four buses were absorbed in a caravan of hundreds on the way to Washington for the March for Jobs and Freedom.

When we entered the nation’s capital, the eager faces, the wildly waving hands, the throngs which greeted us, were the fuel which ignited a glorious torch, a flame which burned brightly, but with a great weight of responsibility — the quick knowledge that we must bear it with dignity, or forfeit the privilege.

The journey into twilight was almost symbolic; moving from dusk to daylight, one understood he was taking part in a grand mission, a mission the world had awaited for a century and was now watching with a suspicious eye.

The burden of proof lay with us. We were arriving now, 185 Riverdalians among more than 200,000 Americans; we were arriving with a message, but the nature of our message demanded that it be delivered with unprecedented dignity.

We were part of the largest group ever assembled in Washington. People lined the pool from the Lincoln Memorial more than half way back to the Washington Monument. They were on the grass, and under the trees, occupying every inch of available space.

They listened quietly, except for an occasional shout of approval — and the one chant, “Pass that bill,” which swelled to a roar when the congressmen were seated on the steps of the memorial.

It was a polite, friendly, dignified gathering. People were eating on the grass, talking casually, but it was not the air of a picnic we breathed. There was, instead, the sense that one was being woven into one of the important moments in history.

Dr. Martin Luther King told us of his dream, and we recognized that his and ours were one.

We who went were still, two days later, keyed from the impact of the demonstration. It was not so much the emotional appeal of the speakers, but the sight of the people — men and women, Black and white, from the north and the south — hundreds of thousands of people standing in the light of the same sun, breathing the same air, sharing a common vision.

One had the feeling that mankind was demanding, and earning a new dignity.