Renew your library card, Riverdale branch is back 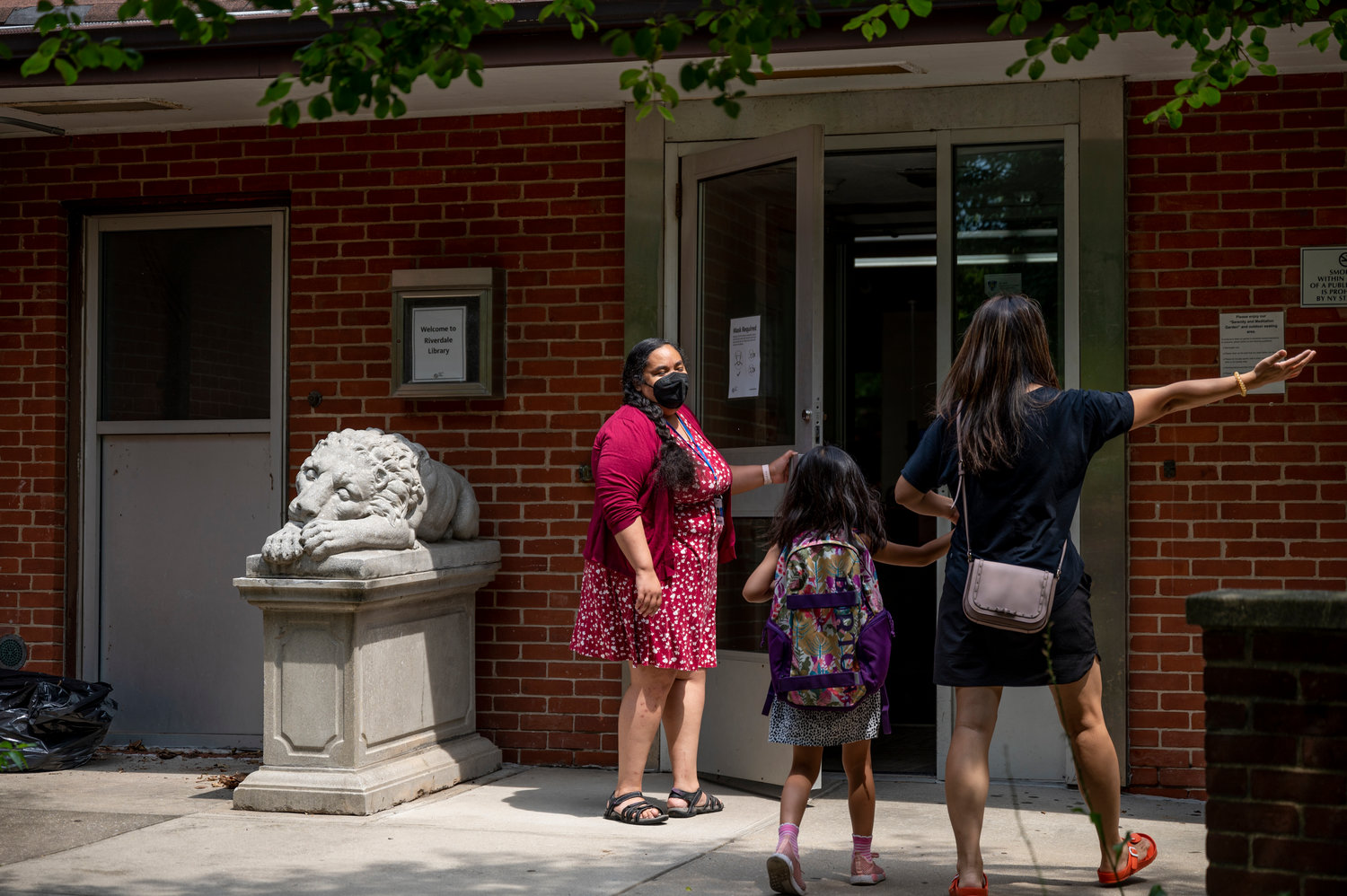 The Riverdale Library opened to the public for the first time since the start of the coronavirus pandemic earlier this week, restoring virtually all its services. Rebecca Brown-Barbier, the branch manager, says the library will host two community days next month inviting neighbors back into the Mosholu Avenue location.
HIRAM ALEJANDRO DURÁN 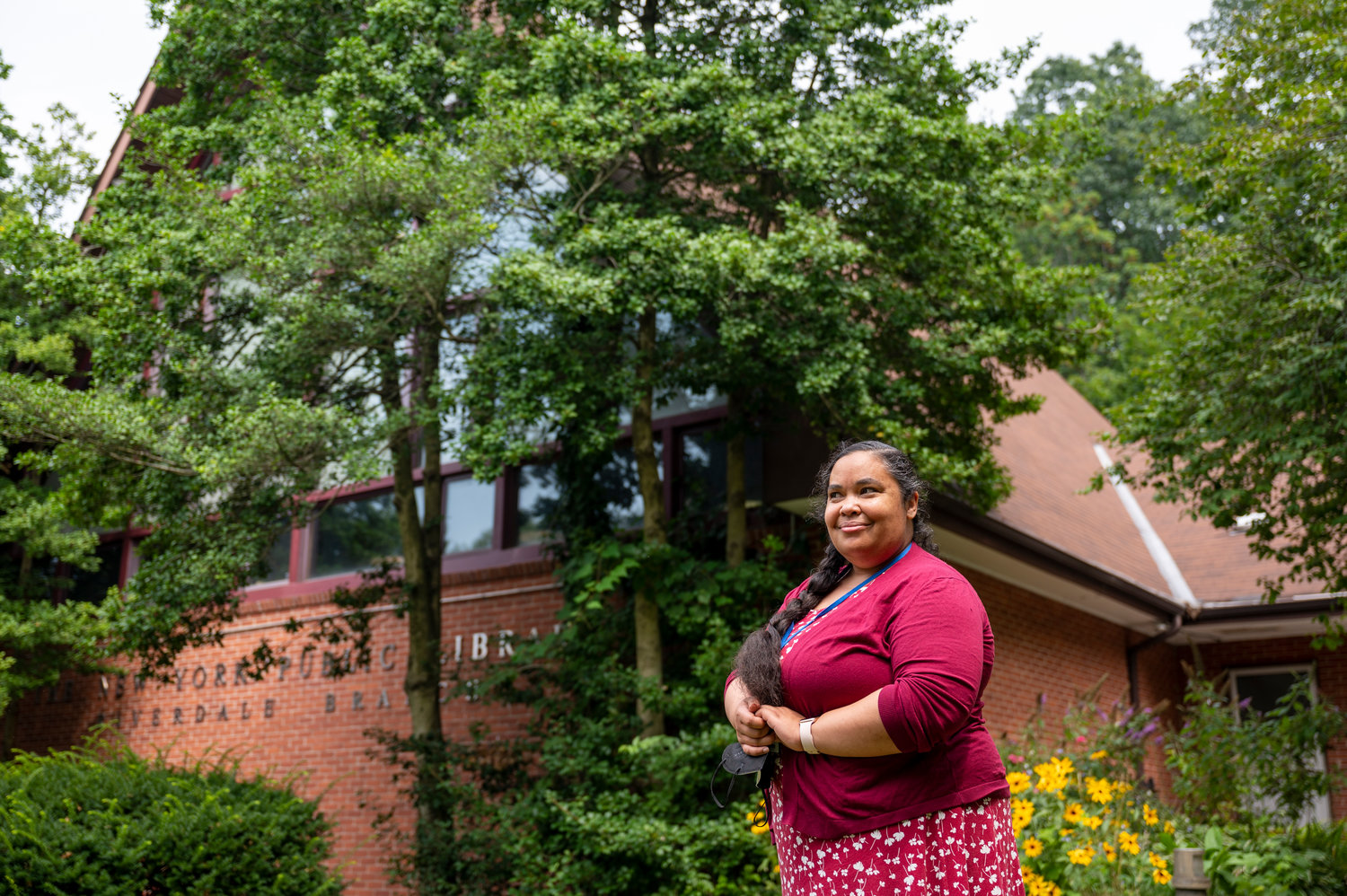 Riverdale Library branch manager Rebecca Brown-Barbier says she would often walk by the library gate and longingly look inside over the 15 months the Mosholu Avenue location was closed because of the coronavirus pandemic. Brown-Barbier and her staff all returned this week to working in-person at the branch, offering most of the library’s services once again.
HIRAM ALEJANDRO DURÃN 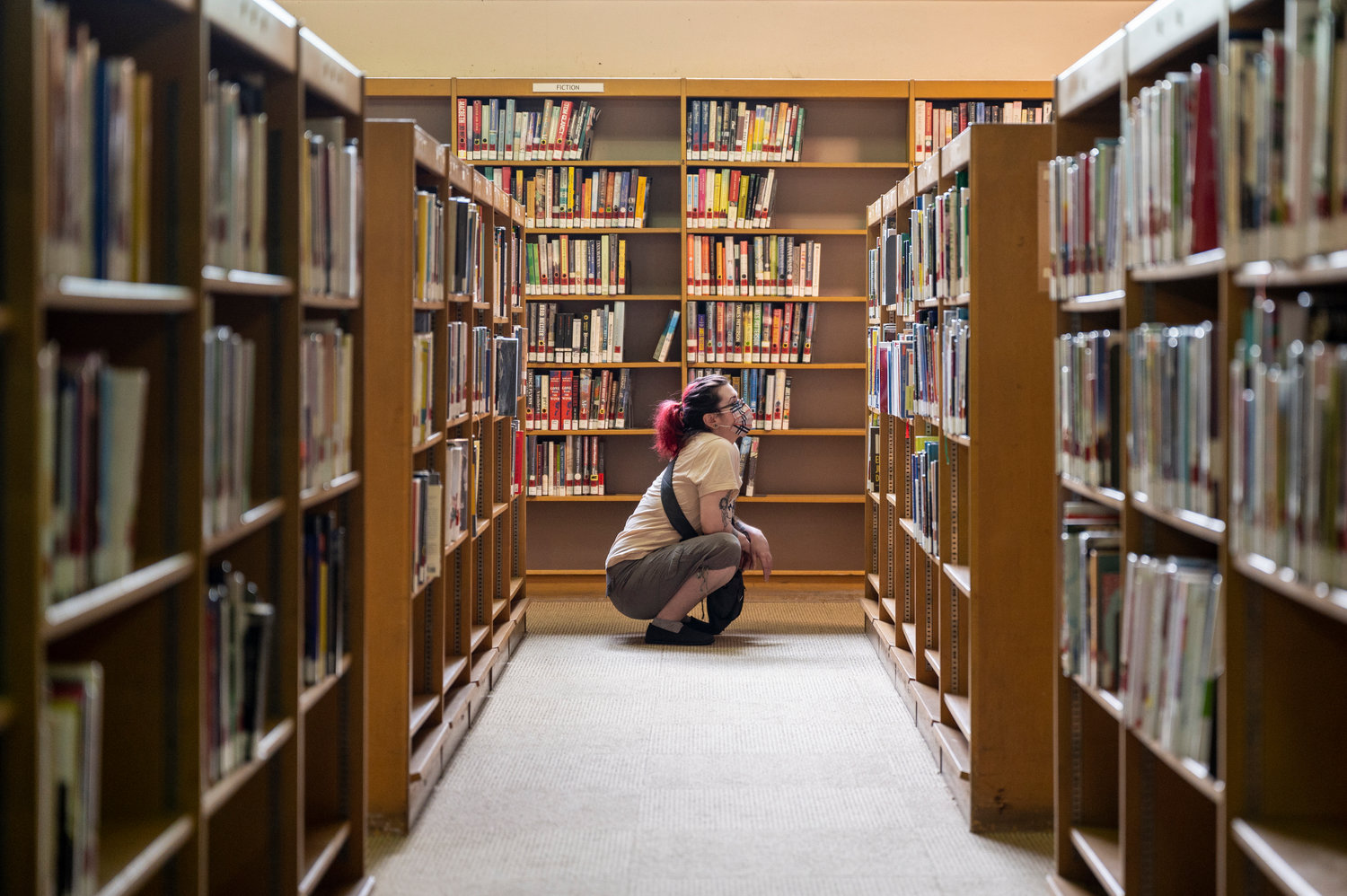 Riverdale Library patrons are required to wear masks inside the building, says branch manager Rebecca Brown-Barbier. This restriction is staying in place as the Mosholu Avenue branch reopens for the first time in 15 months, restoring most of its in-person services.
HIRAM ALEJANDRO DURÃN
Previous Next
Visit your local library

Life is starting to normalize in the wake of the coronavirus pandemic, topped off with all local branches of libraries reopening. Among them:

When the pandemic first hit the city last year, schools, businesses and cultural institutions all shut down to stop the spread of the coronavirus. And the New York Public Library was no exception.

But as more and more people get vaccinated — and after Gov. Andrew Cuomo lifted most pandemic restrictions last month — the library system is slowly reopening its branches. The latest is the Riverdale Library at 5540 Mosholu Ave., across the street from Riverdale Neighborhood House, which finally unlocked its gate earlier this week. After more than a year with the lights off and books collecting dust on its shelves, branch manager Rebecca Brown-Barbier says she’s happy to be back.

“I’ve been waiting for 15 months,” Brown-Barbier said. “I’ve been walking by the gate a few times a week, looking in longingly. And I’m just glad that we will be back.”

It still felt eerily like March 2020 when Brown-Barbier and her staff first re-entered the building because they had to leave in such haste when everything shut down last year.

“It was almost like time stopped,” Brown-Barbier said. “There were still snowflakes on the wall from our March decorations. There were still flyers on programs that we were planning, like our great paper airplane competition that we do annually.”

And Brown-Barbier isn’t alone in her relief. Patrons who spent a lot of time at the library before the pandemic — like neighborhood parent Elizabeth Cecala — are excited, too.

“I used to frequent the library quite often because I have a child,” she said. “And it’s just a great place to go, you know, for books, and to get videos.”

Everything will be fully opened at the Riverdale branch except adult programming, Brown-Barbier said, which will be phased back in over the next few months. This means the branch will once again offer open seating, unlimited internet browsing, computer use, laptop loans, and general use of the reading areas. Even better, the library will resume pre-pandemic hours.

But society is not quite in a post-pandemic state, which means some safety precautions will stay in place. At least for the time being.

“It keeps on changing and evolving, of course, day-by-day,” Brown-Barbier said. “So, right now we require patrons and staff to wear a mask inside. But we’re going to be open full-swing.”

And the branch will celebrate the reopening by hosting community days on Friday, Aug. 13 and Saturday, Aug. 14, Brown-Barbier said, inviting neighbors to help weed the garden — which became overgrown during the pandemic. This week they’re also giving out some 200 “summer learning kits” for kids in the community that include a booklet, a book, and other assorted learning materials.

The Riverdale Library was the last branch in the area to reopen its doors, according to library system spokesman Robert Sherwood. The Kingsbridge and Van Cortlandt branches welcomed back patrons last May, while Spuyten Duyvil reopened July 6.

It’s not that the Mosholu Avenue facility was completely empty during the pandemic. In fact, Riverdale was one of the last to reopen, Sherwood said, because it was one of several branches used by the city’s community and youth development department as a “learning lab” for nearby students.

This meant Brown-Barbier and her team were working out of the Spuyten Duyvil branch for the past month.

“A lot of our patrons would see us at the Spuyten Duyvil branch,” Brown-Barbier said. “They would always ask us, ‘When are you going to reopen?’ And we would say, ‘Soon, soon.’ They said, ‘We want to be back in your garden.’”

“In fact, we were one of the first locations to adapt to virtual programming,” she said. “And that actually proved to be very, very, very popular. And it’s still going.”

This includes programs like “Coffee and a Short Story,” where patrons are invited to read a short story and then drink coffee while joining in a virtual conversation about the story. For instance, next month the group will read “The Hall of Small Mammals” by Thomas Pierce as well as “A Horseman in the Sky” by Ambrose Bierce.

These events usually attract between 10 to 20 participants, Brown-Barbier said — most of them from this corner of the Bronx. However, they also have frequent guests who pop in from other parts of the country, and even outside the United States altogether.

“We have one lady who joins from Louisiana,” she said. “Another lady who calls in the middle of the night from South Korea. It’s amazing.”

While public libraries may seem like an antiquated institution in the digital age, Brown-Barbier says the local branch still plays a vital role in the community.

“The Riverdale branch is like — I often say this — like the community living room,” Brown-Barbier said. “We’re that third space that many other local residents rely on. That space that isn’t home, and isn’t work or school. It’s a place where the community can gather.”

All that’s needed to access the space, hundreds of books, computers and internet for free is a library card. That’s why, Cecala said, it was difficult for the community to live without the Riverdale Library’s resources for so long.

“Particularly to have easy access for books,” Cecala said. “Even in addition to that, they have programs where the kids are able to play with these magnetic blocks and socialize with some other children. There’s a big difference between reading something online and holding a book in your hands. You just can’t compare the two.

“So, to lose that resource was kind of detrimental to the community.”