'Rent' is due for an outdoor show 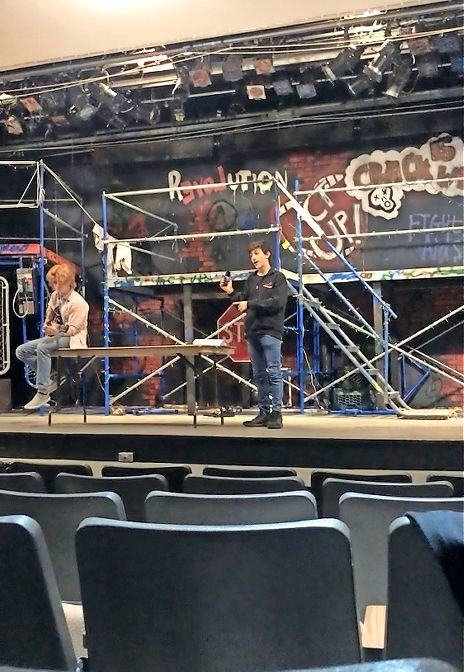 Before the stage production of 'Rent' was postponed, actors like Andrew Binder, left, and Jacob Schorsch, had to FaceTime with their quarantined castmates during rehearsal. Originally set to take place in March, 'Rent' finally takes the stage in August ... outside.
Courtesy of Eliza Fisher
By CHEYENNE R. UBIERA

There may be 525,600 minutes in a year, but for many who have had to stay home through the coronavirus pandemic, it might feel more like 525,600 years.

Few have probably felt that deeper than the young actors of the Riverdale Rising Stars program who, up until the beginning of spring, were in the final stretch to bring their version of the rock musical “Rent” to stage.

At first, a handful of cast members missed rehearsal because they had likely been exposed to the virus, and were quarantined. With a little help from FaceTime, those actors continued to rehearse — just through the smartphone of a fellow actor who was still allowed to visit the stage.

But then as March continued on, even those actors were sent home, and the entire production just stopped. Initially, many thought the pause would last just a few weeks. But those weeks turned into months.

The show has yet to go on.

The cast continues to meet each week, however, except over the Zoom online videoconferencing app, led by director Laurie Walton. At first, rehearsals went on as usual. But as the weeks went by, restlessness started to set in. Walton knew she had to make some changes.

No more just breaking out “Seasons of Love.” Instead, Walton led the group in making videos, drilling acting exercises, and creating monologues for their characters in the show. The goal, she said, was to create a positive place for each of the actors to talk about their experiences.

“We can talk for hours about how things are hard right now,” said Walton, who started Rising Stars more than 20 years ago. “But I want to know what they learned about themselves during all of this.”

And there were highlights. One of the group’s members expressed how they enjoyed reading more thanks to the extra time they have. Another found solace in art projects, while others found new ways to communicate with their families.

The one uniting theme amongst all of them? The consistency they received from the weekly Rising Stars meetings, Walton said. Being away from their friends and not performing was a huge blow. Yet technology allowed that to still be possible, while still providing that necessary shield to stop the spread of the coronavirus

“We could have been done three months ago,” Walton said. “We stayed doing something every Sunday and they’re so happy that we did.”

After months of talks with parents and others on the Rising Stars crew, a decision had to be made over if the Rising Stars would be able to bring Manhattan’s Alphabet City of the early 1990s back to life. The verdict? A big yes. The show will indeed go on, hopefully during the first week of August with six performances.

That was music to the ears of Emma Jonas, who has been part of Rising Stars for five years. Although the 15-year-old said she enjoyed staying in contact with her friends, frustration kept building as the weeks went by and more events were pushed back or canceled.

Now that “Rent” is happening again, she’s ready to finally get back on stage.

“We’ll need to practice a lot since we took some time off,” Emma said. “But being back and doing something we love is going to be really special.”

Still, there will be some changes. Roger, Mark, Angel, Tom Collins and the others will still spend time together — just not as close as the late playwright Jonathan Larson might have originally imagined. Social distancing rules will still be in place for both cast members and the audience, and all performers will wear face masks.

The show also will move out of The Y’s auditorium, to an actual outdoor setting. Where that will be hasn’t yet decided — Walton continues to explore possible locations, with the hopes of settling on a spot soon.

Wearing a face mask while performing “Seasons of Love,” wasn’t exactly what Emma Jonas had in mind. Still, she understands people need to feel safe if they’re going to attend.

Deborah Shapira can’t wait to see her daughter, Kayla Shapira-Stern in the show. Kayla plays Alexi Darling, the reporter at Buzzline who’s determined to hire the documentarian who has bad luck with women, Mark Cohen. Like the others in her position, it’s been agonizing as the months went by and “Rent” was still up in the air. But patience really won the day, thanks in large part to Walton’s efforts.

“She gives everything to this program,” Shapira said. “She’s turned over every stone to get this show to happen.”

And the show has become something more too. It’s symbolic of all the things people have had to sacrifice because of the coronavirus, Shapira added. To see fellow parents be outside, watching their children perform in real-time — and not through a screen — will be worth the wait.

“It definitely won’t be normal,” Shapira said. “But it’s a step towards normalcy that will be very welcomed.”