Health care coverage plan not as good as it gets, so the battle continues to strengthen 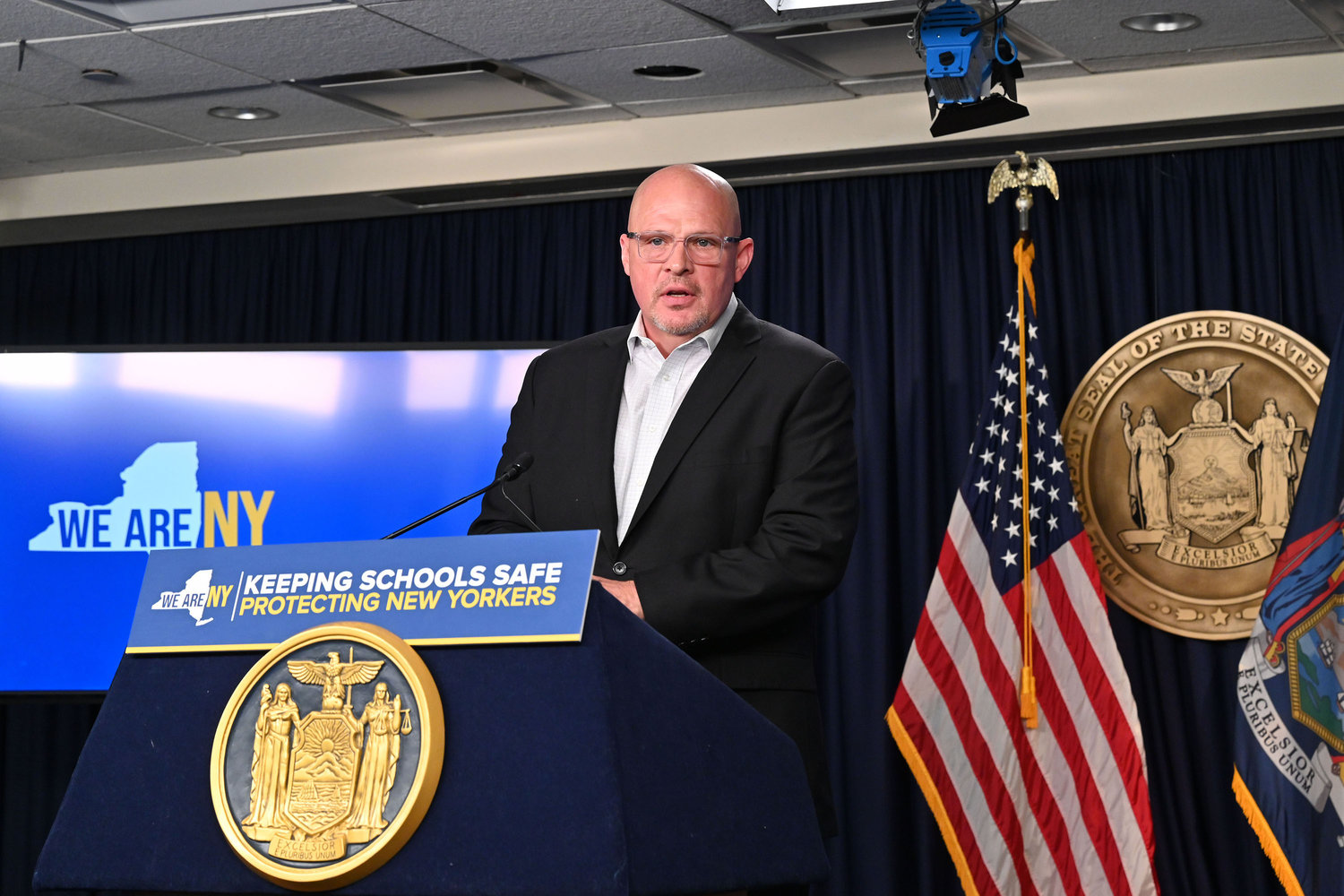 Michael Mulgrew’s union, the United Federation of Teachers, is one of several that are in support of switching municipal retirees to a new healthcare plan. However, many retirees say the supplemental insurance is inferior to the current one.
Courtesy of Kevin P. Coughlin/Office of Gov. Kathy Hochul
By Sachi McClendon

Martha Frazer, 79, recently underwent heart surgery. “I had an angiogram, and they said I had to have open heart surgery. Triple bypass. Almost immediately,” she said. “It was urgent.”

Thanks to her husband, Allen Frazer who worked for the Manhattan District Attorney’s office for more than 40 years, Martha has good supplemental health care benefits paid for by the city. Right away she was able to get the help she needed. “We didn’t have to ask anyone. We were able to go ahead and the surgeon was available less than two days later,” she said.

Martha attributes the speed and ease of the process in part to the current coverage provided by the city. For more than a half-century, the New York city government has paid for the entire cost of health care benefits for city employees and retirees. In many cases, city workers exchanged bigger paychecks while employed in return for retirement benefits guaranteed by the city.

However, that practice may soon come to an end. For well over a year now, the city government has been working on transitioning retired city workers to a new health care plan, in a move the city says will save it up to $600 million a year. If retirees refuse to switch, then the city is trying to get them to pay for their current coverage.

“The city committed to giving us insurance, and now they’re going back on their commitment,” Allen Frazer said. “More than shortchanged, a promise was broken.”

Many retirees like Allen and Martha Frazer don’t want to make the switch. They argue that the new supplemental coverage the city is trying to push on them, Medicare Advantage, offers inferior health care benefits, including a smaller network of health care providers and prior authorization requirements for a slew of life-saving medical procedures.

The New York City Organization of Public Service Retirees, which has been leading the opposition effort, took the city to court over the matter. In March a district judge struck down the city’s plan, agreeing with the organization that the city charter mandates the city cover the cost of retiree’s health insurance.

So in addition to appealing that ruling, Mayor Eric Adams’ administration decided to turn to the city council, beseeching it to change the law. Right now, the city must pay for the entire cost of health care benefits for city employees and retirees up to a cap set at $925 per month.

The draft version of the bill seeks to give the city and the Municipal Labor Committee, which negotiates on behalf of many city worker unions, the power to lower that cap for retirees.

The new legislation could then effectively release the city of its duty to pay for retirees’ current benefits. If they want to keep them, the $191 a month — which is the current cost for the most popular supplemental plan — will have to come out of retirees’ pockets.

That’s where Councilman Eric Dinowitz comes into the picture. On Friday, the councilman took part in a meeting with around 30 city retirees, almost all of whom are his constituents, worried about the fallout that would come from the passage of the legislation.

“If they have to opt out and pay the $200 a month, we think they’re going have to weigh whether they can pay their rent or for their therapies,” said Sue Ellen Dodell, who helped organize the meeting. “If they’re forced to go into this plan (Medicare Advantage) for financial reasons, then their health care will not be as good as it is now.”

Dinowitz, a former teacher, may be feeling pressure from both sides. On the one hand, both Mayor Adams and the majority of city unions — including the United Federation of Teachers that had endorsed him — want to see this legislation passed ASAP. On the other hand, many of Dinowitz’ constituents are retired city workers and call the greater Riverdale area home. In fact, almost 20 percent of Community Board 8’s population is 65 or older, according to 2015 city health data.

Dodell, who is a city retiree herself, said the meeting went over well, but that Dinowitz did not express where he stood on the matter. “Eric definitely understood the issues,” she said. “The legislation has not been introduced yet and he wanted to hear more and get more information from us.”

“He was very sympathetic,” said Allen Frazer, who spoke at the meeting on behalf of his wife. “He said he’s going to be in this position someday. He’s been a school teacher working for the board of education for 10 years. His whole life is essentially working for the city. He wouldn’t make any commitment though about the legislation.”

Dinowitz’ office did not get back to The Riverdale Press when asked if the councilman supports the legislation. His office was closed for Rosh Hashana until Wednesday.

While politicians, retirees and unions debate over the fate of this bill, Martha Frazer has been busy recovering from her surgery. Thanks to her current supplemental benefits, she’s been regularly attending rehab sessions.

“I’m doing outpatient physical therapy. And Medicare is not asking a single question,” she said. “I went from non-functional to a wheelchair, to a walker, to a cane. Now I’m mostly walking on my own, but I still have a ways to go.”

If she were on the plan the city wants her to be on, she fears that should have to get pre-approval for these sessions. “I doubt they would have given approval for rehab” she said. “Because I’ve read and heard that they don’t.”