Congressman proposes bill to punish those who lie to voters 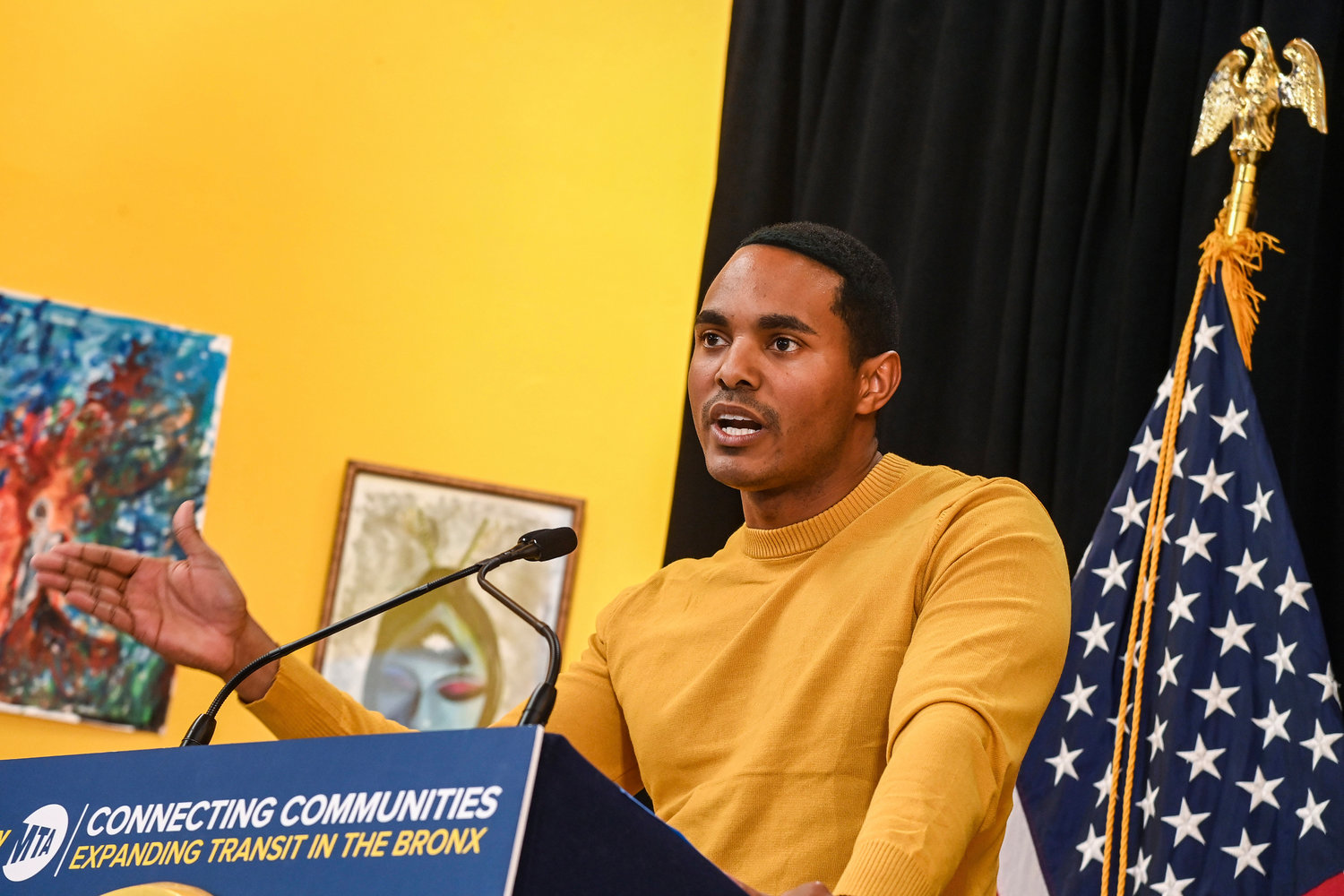 U.S. Rep. Ritchie Torres, shown at a press conference for the MTA projects in the Bronx last year, has taken a hard stance against fellow incoming Long Island Rep.-elect George Santos, who has been accused of lying on his resume during his successful campaign.
Courtesy of MTA / Marc A. Hermann
By Michael Hinman & Gary Larkin

U.S. Rep. Ritchie Torres took his comments about the embattled Long Island Rep.-elect George Santos to another level Dec. 30 when he introduced a bill that would punish candidates who lie to the public.

The bill, aptly called the SANTOS Act (Stop Another Non-Truthful Office Seeker), was announced on Twitter by the greater Riverdale congressman. The tweet said he was “introducing a bill to require candidates to disclose under oath their employment, educational & military so we can punish candidates who lie to voters about their qualifications.”

Santos was elected to represent New York’s third congressional district last month. He was due to be sworn in earlier this week. He has faced calls to step down from both sides of the aisle for lying on his resume and on the campaign trail.

“George Santos is a pathological liar who’s defrauded the voters of New York state,” Torres said when asked on MSNBC’s The Reid Out show what he thought should happen to Santos.

“I mean he has lied systematically about nearly every aspect of his life. His family heritage, his educational background, his employment history, his ties to historical events like the Holocaust or the Pulse club massacre. And the depth and breadth of his deception is staggering. It’s unprecedented. But even worse than his lying is his possible law-breaking.”

He continued that he thought Santos should be the target of multiple investigations. He said the House Ethics Committee should investigate him for his likely falsification of official federal documents.

Santos has admitted some of the claims he’s made about his past were not true, but says he was determined to be sworn in as the next congressman representing parts of Nassau County and Queens this week.

“I’m not going to make excuses for this, but a lot of people overstate their resumes, or twist a little bit, or ‘ingrandiate’ themselves,” Santos told WABC-AM hosts John Catsimatidis and Anthony Weiner on Dec. 26. “I’m not saying I’m not guilty of that. I’m just saying that I’ve done so much good work in my career.”

Santos, who defeated Robert Zimmerman in the race to succeed Tom Suozzi last November, had come under fire last week after a New York Times investigation claimed the politician never worked for companies like Citigroup and Goldman Sachs as he claimed, nor did he graduate from schools like Baruch College or the private prep school Horace Mann school in Riverdale. Santos called the discrepancies a result of a resume where such work history was “stated poorly,” according to a separate interview conducted with Victor Nava and Carl Campanile of the New York Post.

“My sins are embellishing my resume,” Santos told the publication. “I’m sorry.”

Santos says he did work with Citigroup and Goldman Sachs through “limited partnerships” that were set up through a company he had worked for at the time, LinkBridge Investors, where Santos — as a vice president — assisted in making “capital introductions” between clients and investors, according to the Post.

Santos received that job despite not earning a college degree, which he also admitted to the publication was different from his previous claims of receiving a degree from Baruch College. The Times, in its reporting, said Baruch officials had no record of Santos graduating from there. CNN reported Horace Mann also had no record of him attending their school.

Despite that early success, Santos also admitted to having had serious financial difficulties over the last decade — including thousands of dollars of arrears to a Queens landlord. But those issues, he said, came from his need to care for his mother, who was suffering from cancer, and who died in 2016.

“I had financial struggles and difficulties in my life, just like everyone else,” Santos told WABC. “But it’s things like The New York Times and the elitist institution of The New York Times that makes a front-page cover calling me ‘George Santos and his odd jobs.’ I worked proudly at a call center when I was younger. That’s not an odd job.”

Yet, Santos didn’t address how he made the step from the call center job into a company that bears his family name allowing him to donate nearly $700,000 to his campaign, while claiming assets of more than $1 million. He only told WABC that the money loaned was indeed his, but provided no other explanation.

He also admitted to the Post that he doesn’t own more than a dozen properties as previously claimed, and now lives with his sister in Huntington.

Additional reporting by the Jewish publication The Forward questioned Santos’ claims that his grandparents were Jewish and escaped the Nazis during the Holocaust. Santos told WABC that his grandfather was of Ukrainian descent and his grandmother was from Belgium. His family line goes from Ukraine to Belgium and then ultimately to Brazil, where his mother was born.

Santos told the Post his grandmother would talk about being Jewish before converting to Roman Catholicism, and that because his maternal side of the family had Jewish roots, he would describe himself as “Jew-ish” — indicating the slang term typically used to denote someone who is kind of something.

As for other claims that four victims of the Pulse gay nightclub shooting in Orlando, Florida — where 49 people were killed in 2016 — were employees of his, Santos revised his remarks, telling WABC that they were “being hired to work for the company at the time.”

After the news first broke, Zimmerman — who lost to Santos in the general election — called for his opponent to be investigated.

“My campaign has been calling out George Santos’s scams and lies about himself for several months,” Zimmerman said, in a statement. “The reality is Santos flat-out lied to the voters. He’s violated the public trust in order to win office, and does not deserve to represent Long Island or Queens.”

Joseph Cairo, chair of the Nassau County Republican Committee, said last week that while the claims against Santos were serious, the congressman-elect should have the chance to clear things up.

“Every person deserves an opportunity to ‘clear’ his/her name in the face of accusations,” Cairo said, in a statement. “I am committed to this principle, and I look forward to the congressman-elect’s responses to the news reports.”

Cairo has yet to provide any additional statement since the pair of Santos interviews with  the conservative-leaning outlets.

Although some key Democrats — including outgoing House Speaker Nancy Pelosi — have said Santos should not be seated in Congress, and state attorney general Letitia James — another Democrat — says her office is looking into some of the claims, Santos is adamant he will take the oath of office for his new elected position next week.