Unusual vote may have a deeper story behind it 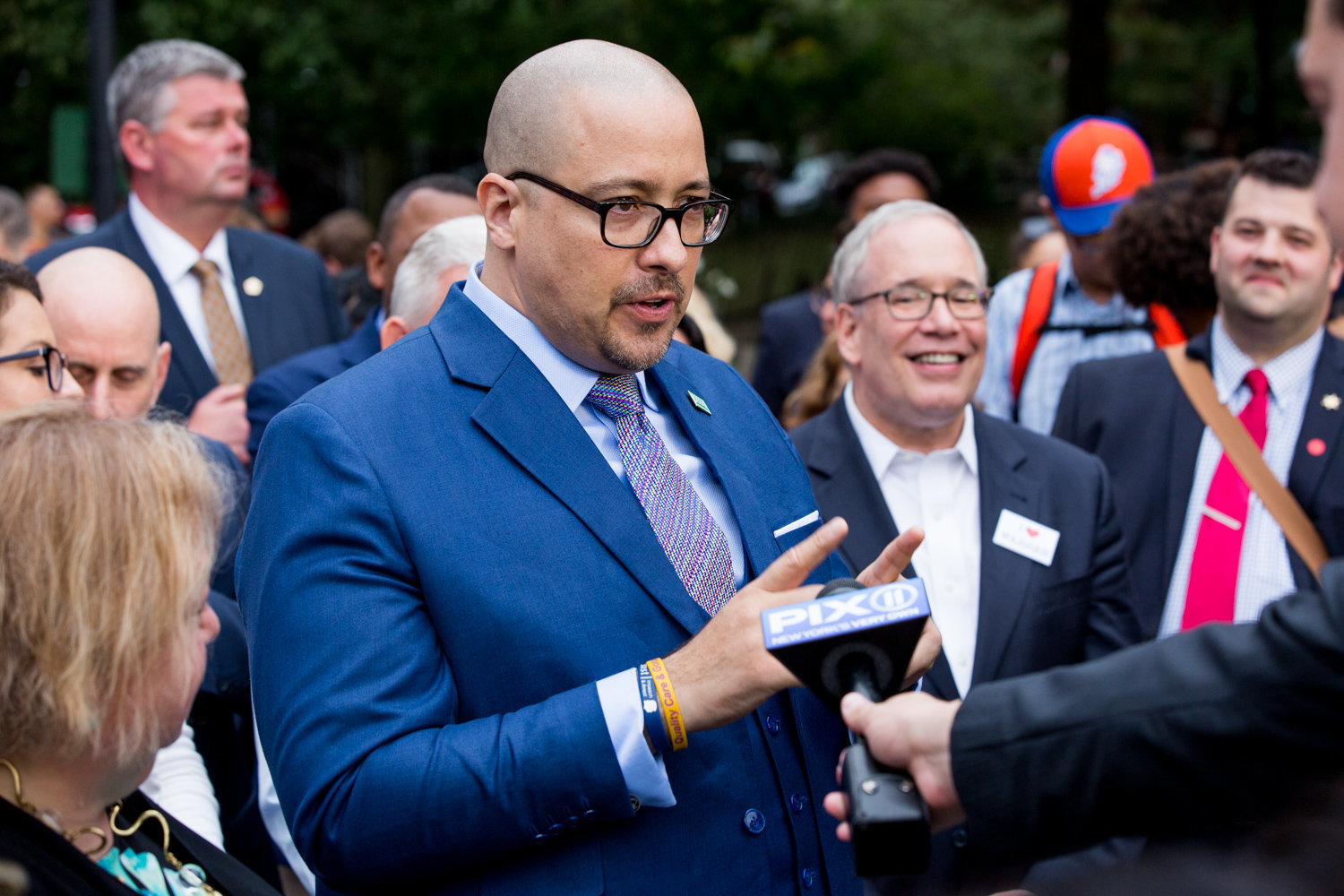 State Sen. Gustavo Rivera nearly lost what had been expected to be a routine endorsement from the Benjamin Franklin Reform Democratic Club just days after informing Assemblyman Jeffrey Dinowitz he was backing leadership change at the club.
JULIUS CONSTANTINE MOTAL / File
By MICHAEL HINMAN

It was just another meeting of the Benjamin Franklin Reform Democratic Club, as nearly 100 people squeezed into the club's quaint storefront space on West 231st Street.

Among the tasks in front of the longtime political club on a chilly Wednesday evening? Prepare to vote for club officers and its executive committee in just a couple weeks. And endorse a couple of incumbent state senators in their uncontested primaries to keep their seats.

State Sen. Jamaal Bailey, whose district lightly touches into this part of the Bronx, talked tough on his push for bail reform that recently became law, invoking members of his family — and his desire to keep them safe — more than once. State Sen. Gustavo Rivera made the case for his seat, first thanking the Ben Franklin Club for being so instrumental in helping him win the senate seat nearly a decade ago, and then sharing his success of having 20 bills signed by the governor.

Where it became unusual, however, was with Rivera. He ultimately won endorsement — but barely. He had 41 votes supporting another term in the state senate, but inexplicably 36 votes against. If five votes had gone the other way, the Ben Franklin Club would have taken a rare position of not endorsing an unopposed incumbent seeking to maintain his own office.

No one had confronted Rivera during his presentation, or even during the five minutes of questions afterward. He is known to work well with the Bronx delegation of electeds, especially Assemblyman Jeffrey Dinowitz, who many say wields considerable power in the club.

So what happened? After the meeting, Rivera wouldn't speculate, instead expressing his gratitude to the Ben Franklin Club for awarding its endorsement. But he did share with The Riverdale Press one thing that had happened two days before that was out of the ordinary.

Rivera told Dinowitz he was backing a slate of candidates led by Morgan Evers challenging current president Michael Heller and his team for leadership of the club. A nominating committee — which included Dinowitz's chief of staff Randi Martos, son Eric Dinowitz and former chief of staff Bill Weitz — had recommended most of the officers and executive committee members retain their current seats, including Heller as president and Bruce Feld as vice president.

This alternative slate led by Evers, an elementary school teacher, is contrary to what the club's nominating committee had recommended, and is endorsed not only by Rivera, but also state Sen. Alessandra Biaggi.

Rivera could have easily kept to himself his backing of these alternative candidates to lead the club until after his endorsement, but told The Press he wanted to do the right thing by letting Dinowitz know ahead of time.

"Morgan and the rest of the folks that are running on this slate, they came to me and they said, 'This is the vision we have for the club, these are the things we think we should be doing,'" Rivera said. "And I was like, 'I like that vision. It follows along with what I think a political organization like this should do.' So they asked me for my support, and I gave it to them."

"And as far as picking up the phone and calling Jeff, it just seemed fair to me to let him know. I mean, he's obviously supporting the current slate, and that's his prerogative."

Rivera stopped short, however, of drawing a correlation between his phone call to Dinowitz at the beginning of the week and a vote that came quite close to being a disaster.

"You're going to have to ask the people who voted against, what was it, 36 people?" Rivera said. "As I always do, every two years, I go before my constituency — whether it be folks in that club, or folks in my block — I say, 'This is what I've done for you in the last two years, and I would be honored if you would give me an opportunity to continue.'"

Dinowitz declined to comment through a spokesman, saying this story was written from a "single perspective," and he "didn't see the point" in talking about it.

No matter what was at play Wednesday night, Rivera — whose district touches the Kingsbridge Heights and Kingsbridge parts of the community — picked up the endorsement.

In the meantime, Ben Franklin Club members will have some more decisions to make Jan. 29 when it comes to electing officers and an executive committee for the upcoming year, which will include statewide elections, and a challenge to Republican presidential incumbent Donald Trump.

Rivera said he will be there to help any Democrat he can, even Dinowitz.

"I don't have an issue with Jeff," the senator said. "I believe Jeff is an excellent Assembly member. I've done work for him before, and I will do it in the future. If he doesn't feel that he wants to work with me, then that's on him."