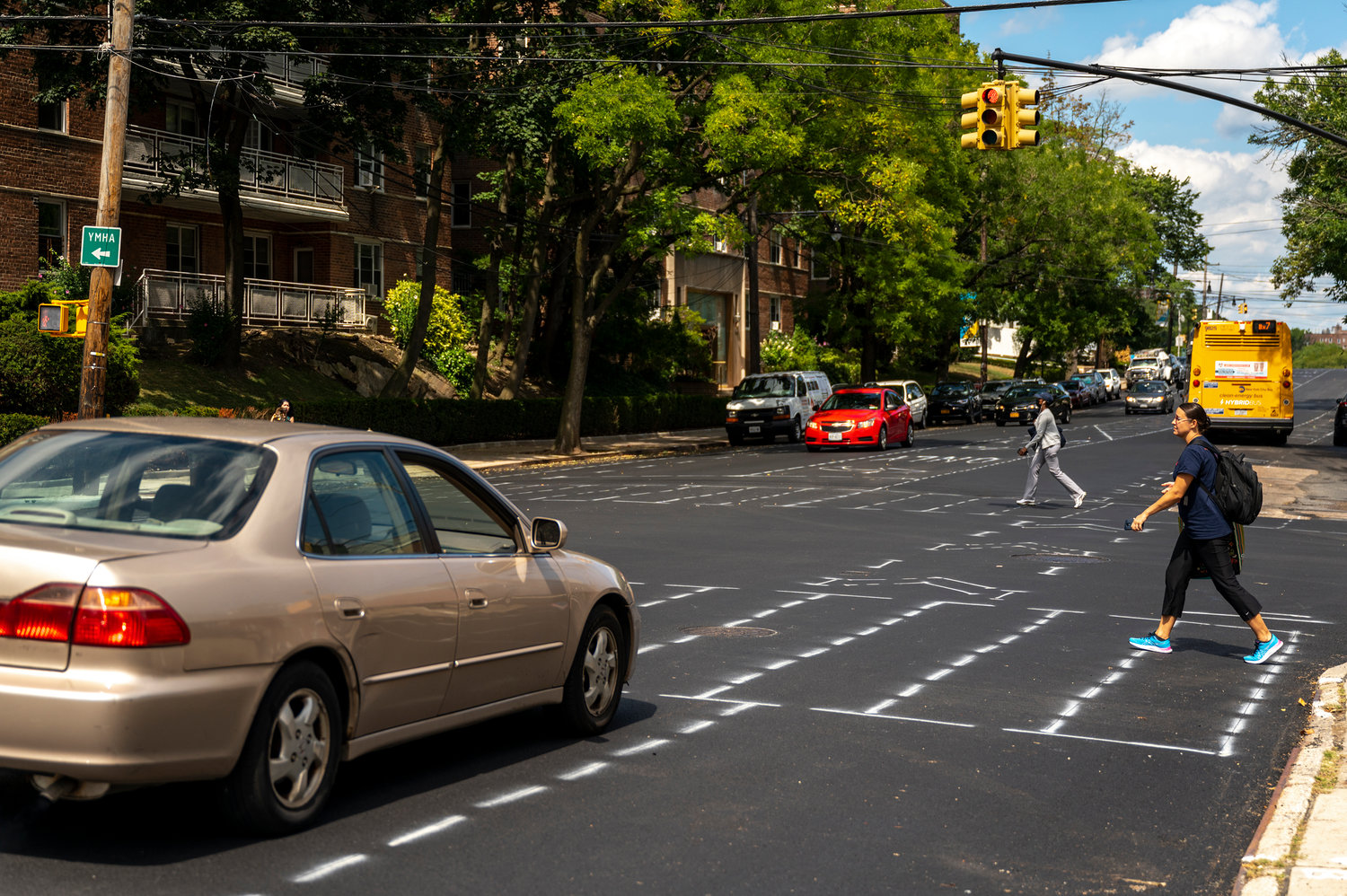 The Department of Transportation are advancing with its controversial and debated road diet plan for Riverdale Avenue between West 254th and West 263rd streets.
Hiram Alejandro Duran 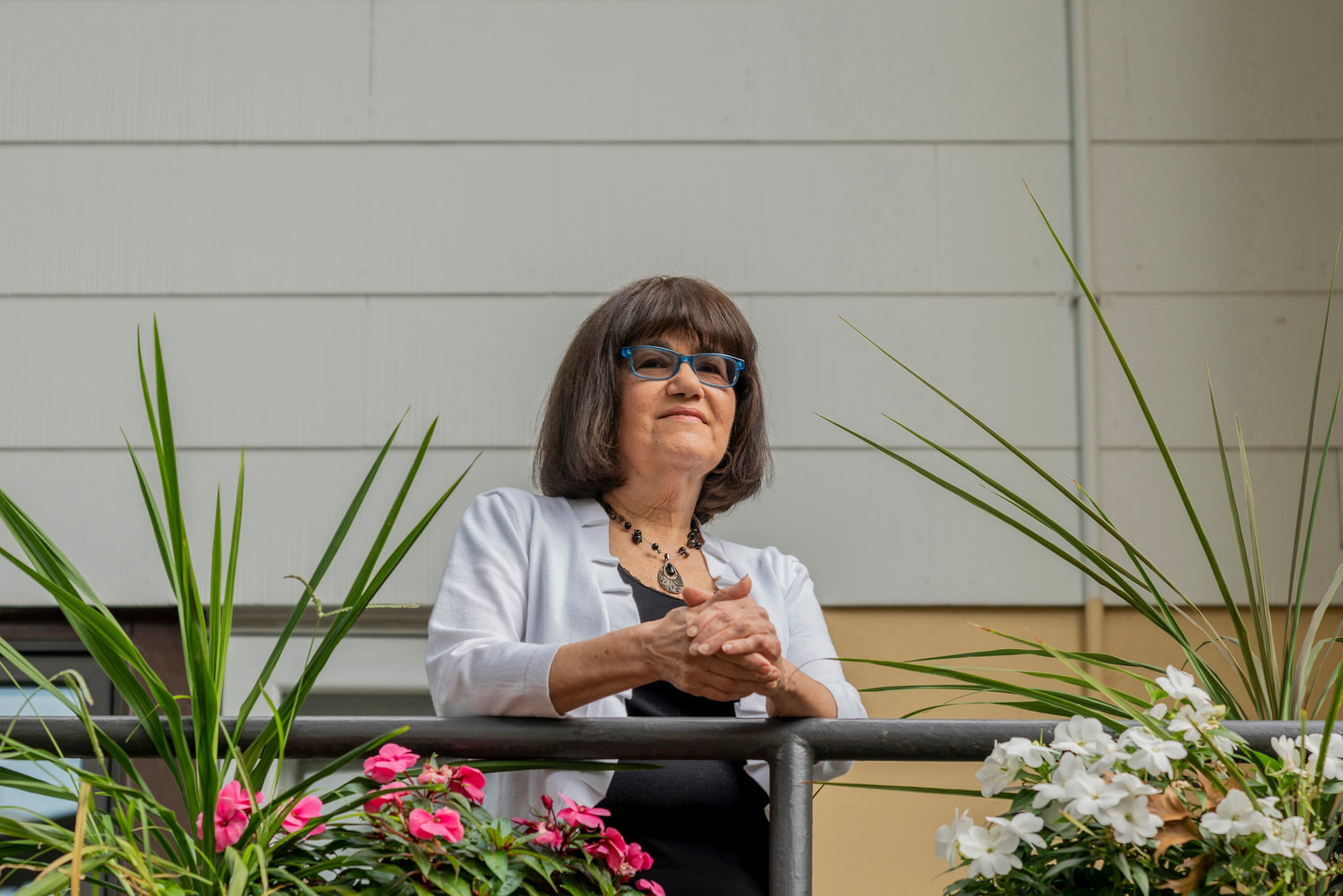 Community board 8 chair Laura Spalter believes the Riverdale Avenue road narrowing plan is unsettling for commuters. Her views are mainly on traffic and congestion, while others show their opposition towards safety. Meanwhile, a traffic and transportation meeting will take place at St. Margaret’s school on Sept. 15 to continue to discuss the DOT’s traffic plans that Spalter requested.
Hiram Alejandro Durán
Previous Next

It was always about their plan and doing it the way they want to do it. Because they know better, and they know the neighborhood better than the people who live here.”
JEFFREY DINOWITZ, Assemblyman
By Stacy Driks

If you drove down Riverdale Avenue last week, you would have noticed some strange markings and fresh paint on the roadway. That’s because the city transportation department had begun the much-ballyhooed road-narrowing plan there.

Nearly five months since the contentious Community Board 8 traffic and transportation committee voted against the DOT plan, North Riverdale’s main thoroughfare is starting to look and feel different.

“I drove there today just to do a test drive, and I got to tell you, being behind the bus on a one-lane road is not pleasant,” Assemblyman Jeffrey Dinowitz said last week.

Nearly five days after Dinowitz’s observation, Riverdale Avenue between West 254th and West 263rd Street has been officially transformed into a narrower roadway with turning lanes and special lanes for bicycles. The work that started two weeks ago was completed over the Labor Day weekend.

“DOT is proud to deliver a project that improves safety for all road users on Riverdale Avenue,” said Mona Bruno, a DOT spokesperson. “We are excited to implement a design that reduces speeding, calms traffic, and slows turning drivers on the streets while creating an important new connection for the borough’s new bike network.”

Last week only traced pavement markings and some newly painted bicycle lanes  highlighted some of the department’s plans. There were markings of a 5-foot bike lane between defined parking spaces and a standard narrow travel lane.

A center median and a left turn bay are in the middle of north and southbound directions. Its purpose is for organized traffic to allow turning vehicles to yield for oncoming traffic and pedestrians.

At first, the Assemblyman blasted the transportation department for its lack of transparency. Prior to the traffic and transportation meeting, the DOT refused to show its proposal to narrow the streets of Riverdale Avenue.

According to his weekly newsletter, the Assemblyman had scheduled a protest Wednesday at the corner of Riverdale Avenue and West 256th St. at noon. The protest against the road-narrowing project was planned with city Councilman Eric Dinowitz and members of the Community Board 8.

Dinowitz continuously asked the department to install a left turn signal for northbound traffic from West 256th to West 259th streets, he  told The Riverdale Press.

“I think they (DOT) shouldn’t be so dismissive of people who know the neighborhood and have to say, especially when I have given them what I consider a much smarter alternative to accomplish—what I thought was their goal, which is safety,” Dinowitz said.

The road simply does not have the correct space for his plan.

“But they (DOT) don’t want to do that because it was never about public safety. In my opinion,” Dinowitz said. “It was always about their plan and doing it the way they want to do it. Because they know better and they know the neighborhood better than the people who live here.”

The Bronx is not the only area where the road diet is planned. Staten Island’s Hyland Boulevard is expecting one, too. Interestingly enough, their community board is not thrilled.

“The DOT is  even removing parking,” — it’s much worse than this,” said Laura Spalter, CB8 chair.

“I’m very concerned about when they (commuters) come from Yonkers, from four lanes to two lanes when they come to the Bronx.”

The Assemblyman said that no matter how many travel lanes there are, there would always be a substantial amount of traffic.

But yet, both Spalter and Dinowitz are shocked at how quickly this is happening.

“The good news is that the DOT has shown that they are capable of milling, paving, and restoring pavement markings within just a few days,” Dinowitz said.

The city mills a street in anticipation of repaving it, and it usually takes several weeks between the milling and the repaving. The DOT just repaved the road in front of Dinowitz’s office on Kingsbridge Avenue. However, they have yet to begin with pavement markings with the crosswalk.

Yet, the DOT  completed the milling and repaving in no more than two weeks. According to Dinowitz, the department can operate with lightning speed when they want to.

In his opinion, the DOT is moving fast to avoid any more opposition.

Spalter has planned on inviting the DOT to a traffic and transportation meeting in the coming weeks on Sept 15 at 7 p.m. at Saint Margaret’s church to discuss traffic plans.

All Spalter has asked for since April was DOT’s study on Riverdale Avenue traffic. How did they receive the data on accidents to make a move on narrowing Riverdale’s artery?

However, not all hope is lost for the northwest Bronx community that oppose the department’s plan because there is always a chance that the DOT will revisit this site in one year and see if accidents decreased, examine traffic flow, and such.

It can be reversed, but not if the DOT finds accidents have decreased there.

“This was between, like opposite Skyview shopping center — south of West 259th and so everybody had to go around the double-parked truck of course in the bike lane,” Dinowitz said. “Plus, the bus that had to go around, had to go into the middle lane. And I guess we’ll be getting a lot of that. So technically doing that is illegal but I guess the DOT is willing to be okay with those kinds of illegal things.”

The area has experienced 14,244 reported crashes in the past five years according to CrashMapper.org. These reports concluded a total of 4,533 people, which led to 25 deaths.