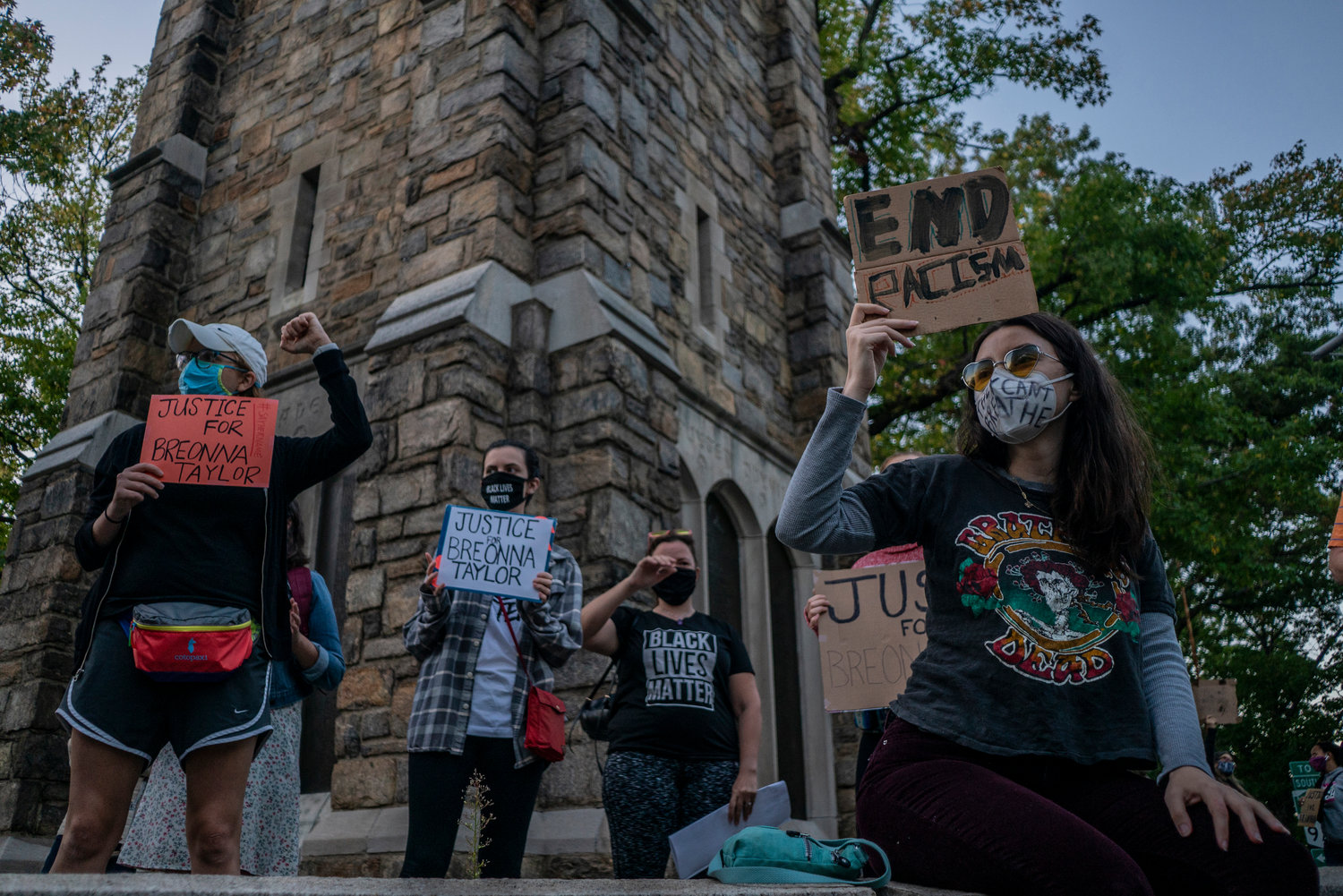 Police responded to a June protest in Mott Haven by the hundreds, conducting mass arrests and, according to a new report by Human Rights Watch, violating international human rights law. Jennifer Scarlott, who organizes protests — including one at the Riverdale Monument on Sept. 28 — said protests in Riverdale and the surrounding neighborhoods see far lower levels of police presence.
HIRAM ALEJANDRO DURÁN 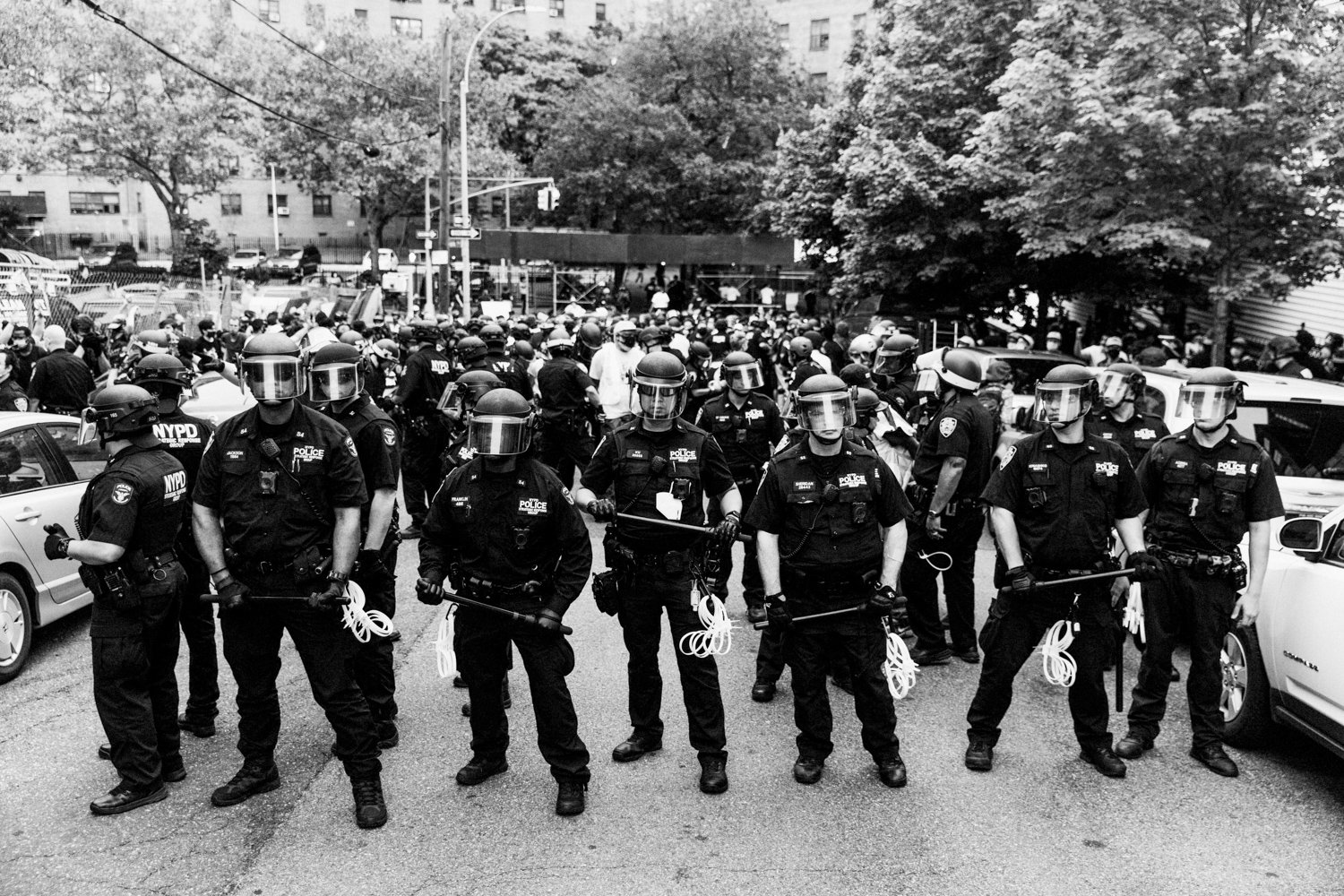 Police officers respond to protesters in Mott Haven on June 4 in the wake of the police-involved killing of George Floyd in Minneapolis in response to a protest. More than 100 protesters were arrested that night after reportedly being ‘kettled’ by police and finding themselves unable to get home as the 8 p.m., curfew took effect.
JULIUS CONSTANTINE MOTAL / File 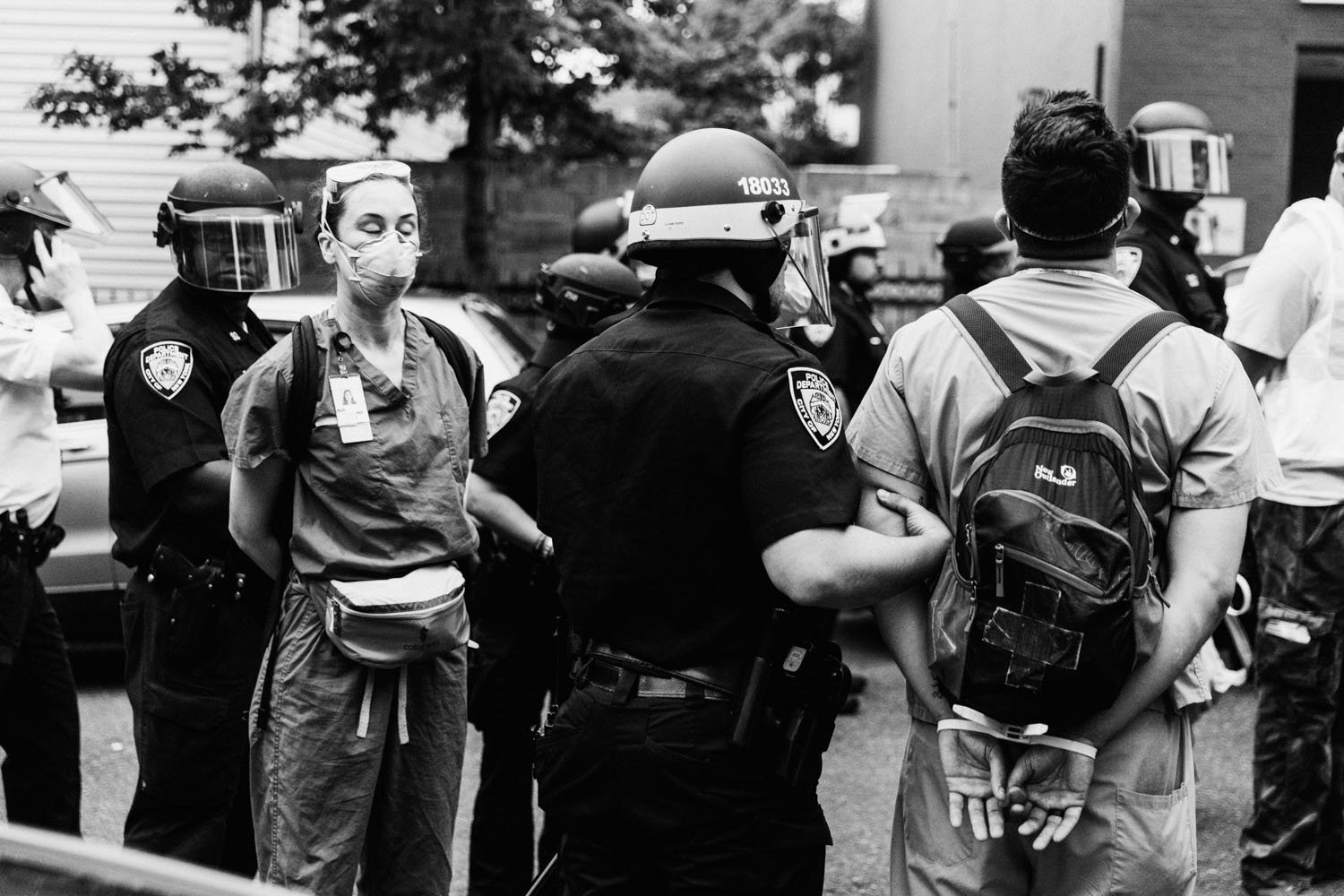 The New York Police Department’s response to a Mott Haven protest last June has been condemned by Human Rights Watch. A new report, which compiles dozens of interviews, videos and analysis of what happened that night, details the protest and hundreds of arrests..
JULIUS CONSTANTINE MOTAL / File 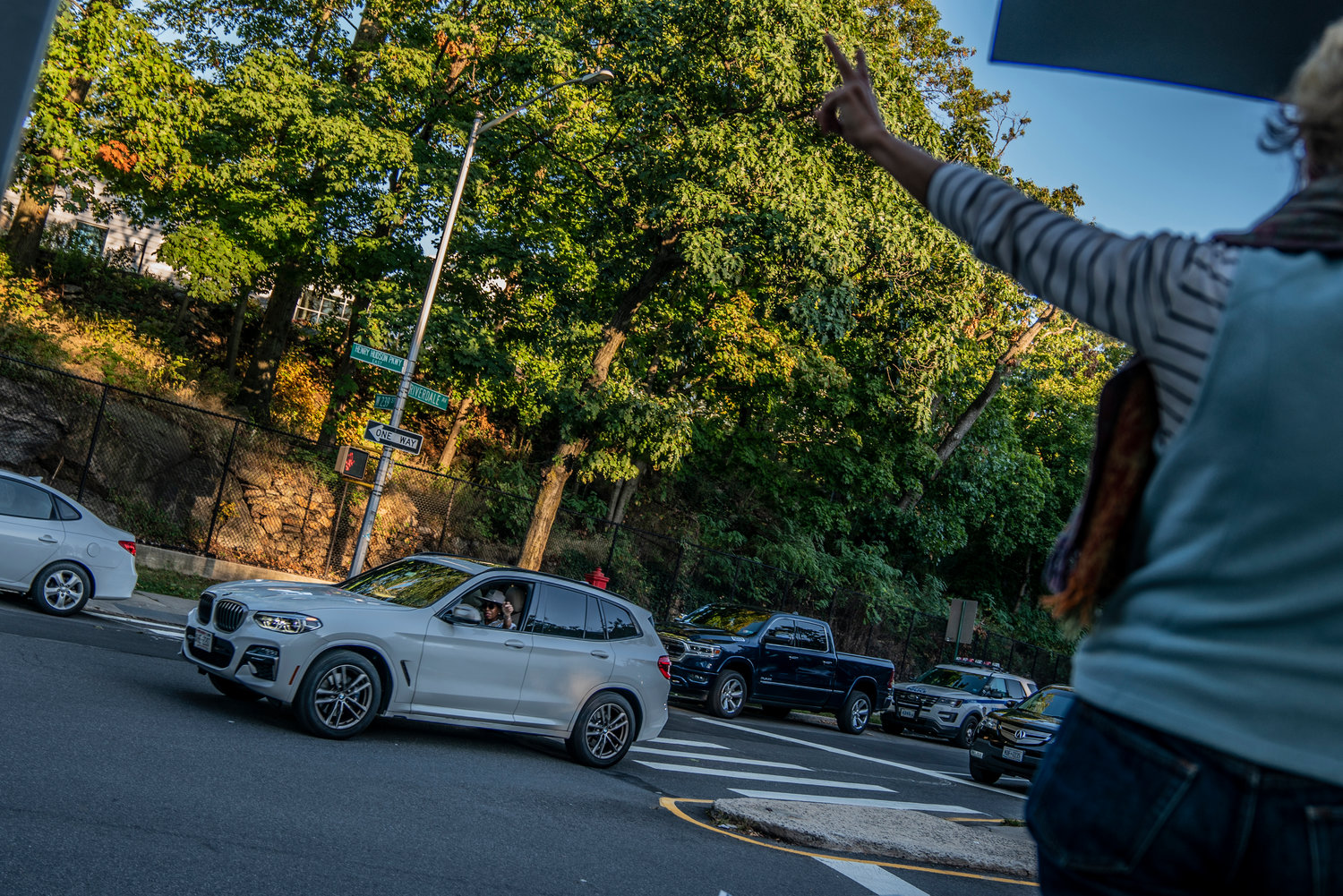 Protesters gathered at the Riverdale Monument last week calling for justice for Breonna Taylor, who was killed by police in her Louisville, Kentucky, apartment in March. Protest organizer Jennifer Scarlott says police rarely interfere with protests in this part of the Bronx.
HIRAM ALEJANDRO DURÁN 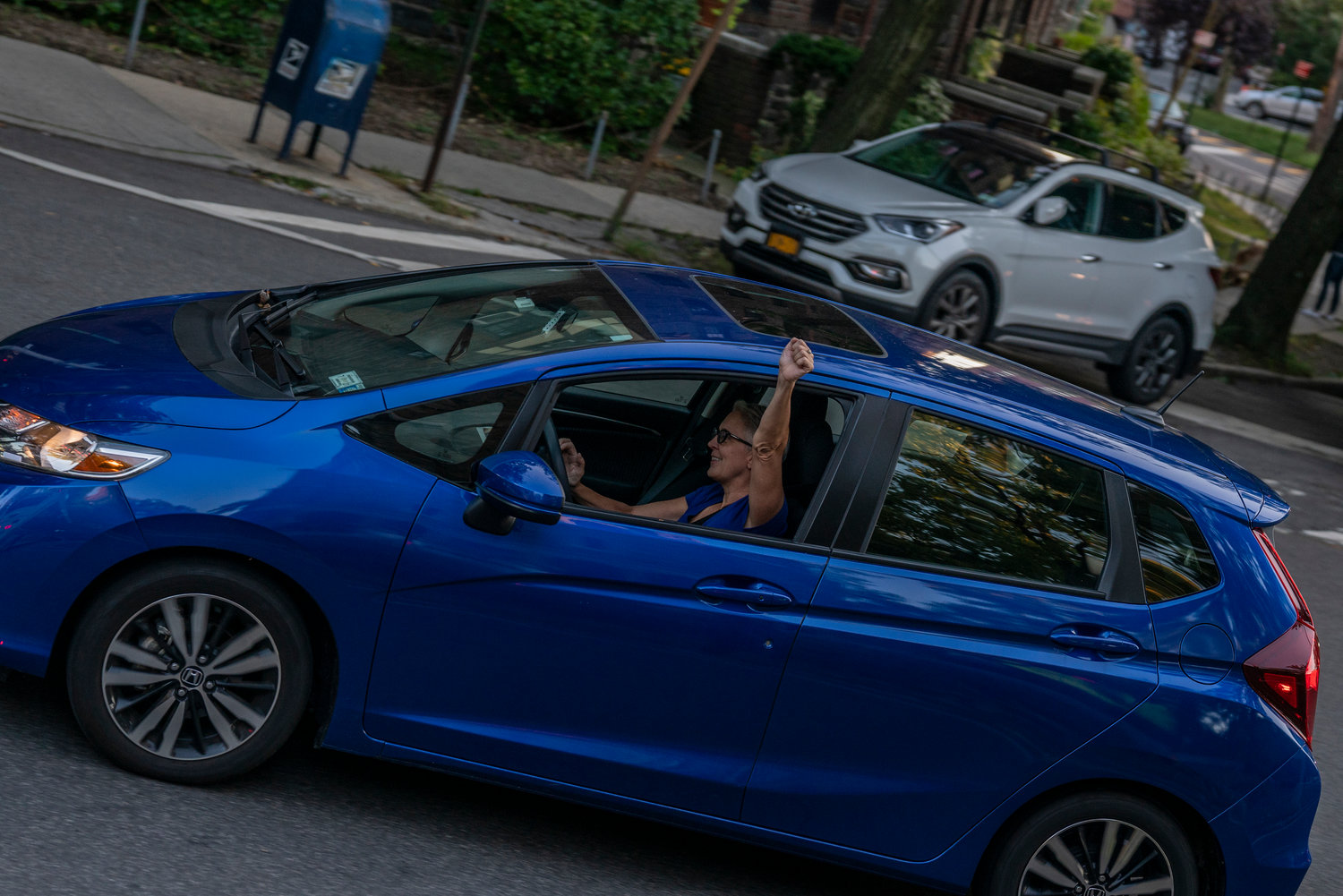 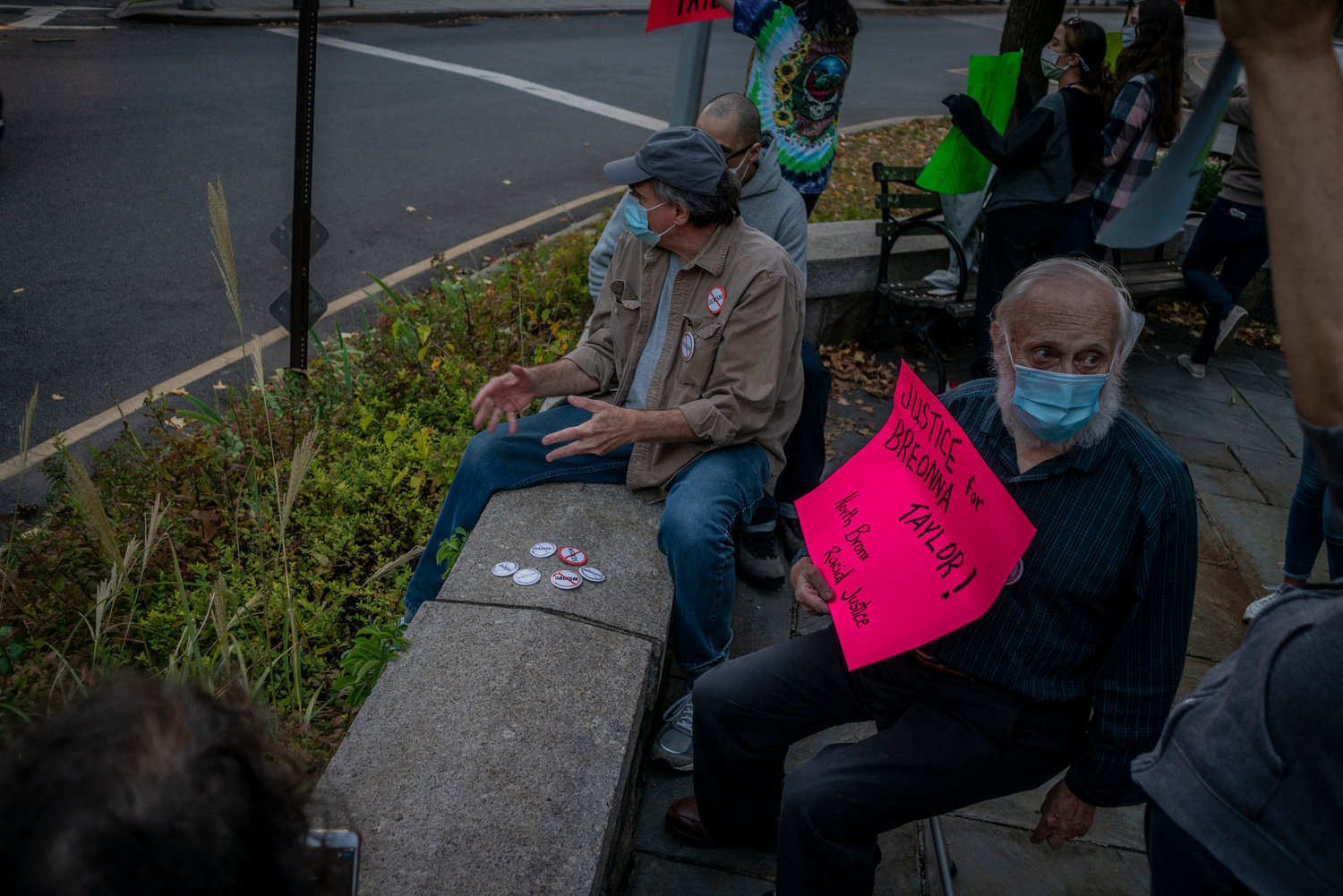 Keeping up with what the New York Police Department deems acceptable during protests is difficult, said North Bronx Racial Justice organizer Jennifer Scarlott. The organization usually don’t seek permits, and tries not to interact with officers who do respond to protests. That was seemingly impossible for hundreds during a protest in the south Bronx on June 4 where police reportedly surrounded and trapped them.
HIRAM ALEJANDRO DURÁN 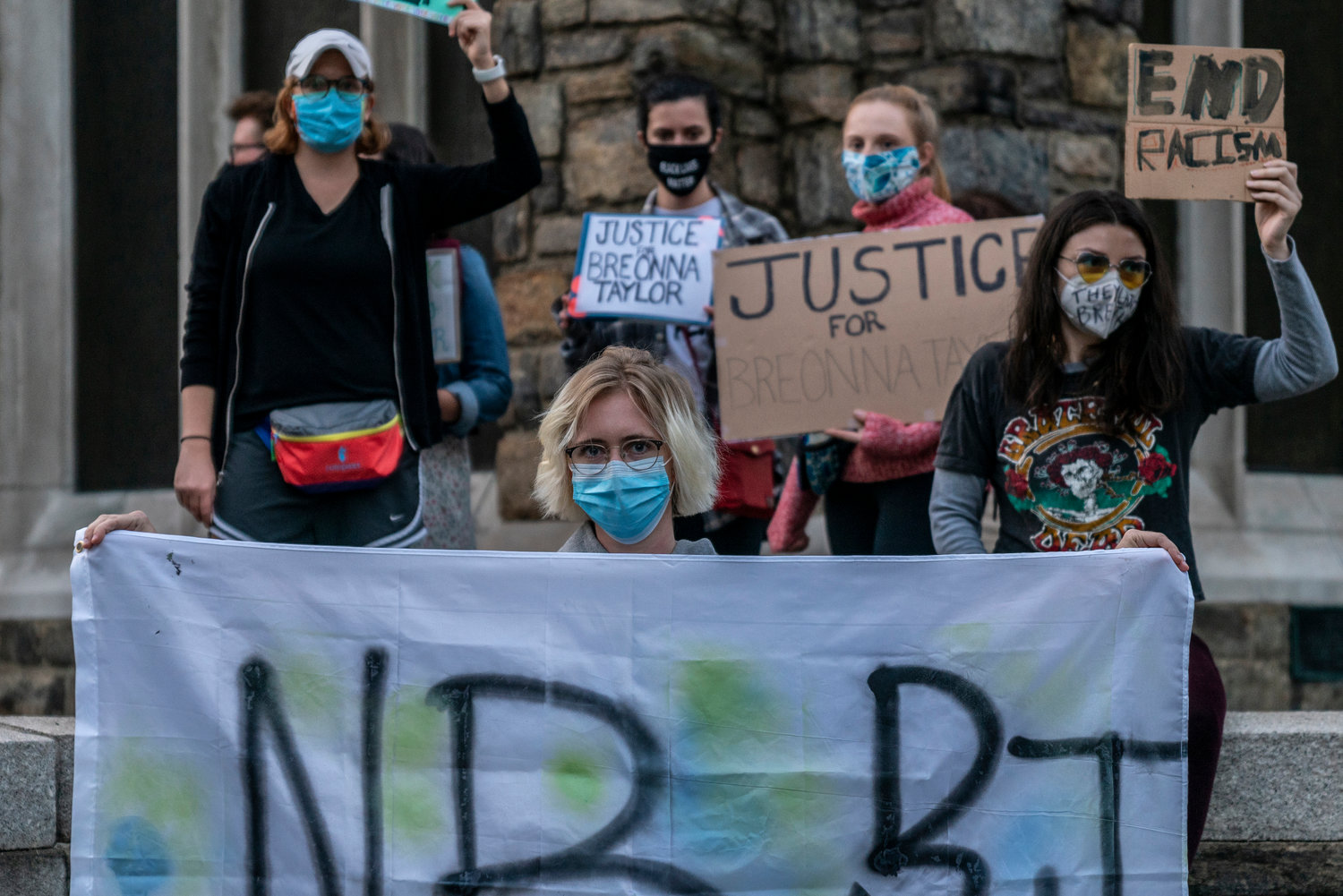 Over a hundred people were arrested in the south Bronx during a protest in June, prompting a damning investigation by Human Rights Watch. Treatment of protesters is wildly different in this part of the Bronx, where police rarely respond with any kind of force, according to organizer Jennifer Scarlott.
HIRAM ALEJANDRO DURÁN
Previous Next
By KIRSTYN BRENDLEN

It was just 10 days after the police-involved killing of George Floyd in Minneapolis. It had been 10 days of protests nationwide, including in New York City, where crowds flooded the streets each night calling for justice for Floyd and others killed by police in cities across the country.

By June 4, after some protests drew rioters, Mayor Bill de Blasio implemented an 8 p.m., curfew, forcing even the most vocal indoors by sundown.

As they approached Brook Avenue in Mott Haven, the protesters found a new barrier: a wall of police officers. It was just before de Blasio’s curfew, and protesters suddenly found all their exits blocked as more officers filled into the street behind them.

Observers said it was a police technique known as “kettling,” which prevented protesters from leaving, flanked on both sides. Once the clock struck 8, witnesses said police started pushing into the crowd arresting protesters for what seemed nothing more than violating curfew.

More than 260 people were arrested that night, according to a new report from Human Rights Watch — more than any other protest in the city. That same 90-page study concludes that police behavior that night — like reportedly beating protesters and arresting medics and legal observers — violated international human rights law, and says police response was planned ahead of time.

Among those arrested that night was Andom Ghebreghiorgis, who days earlier had suspended his Congressional primary race against Eliot Engel. He livestreamed the protest on Instagram up until he was arrested, later writing and posting a detailed account of the night. He was loaded onto a police bus with dozens of other protesters, taken first to Queens and then Brooklyn, where he was held for about 12 hours before being released on the afternoon of June 5.

Ghebreghiorgis was one of more than 80 protesters interviewed by Human Rights Watch for the report, which also analyzed hundreds of photos and videos, social media posts, and police scanner information from that evening.

“Based on this research we were able to document in detail the extent to which the assault in Mott Haven was intentional and in clear violation of international human rights law,” said Ida Sawyer, the acting crisis and conflict director at Human Rights Watch, and a co-author of the report.

The protest had been peaceful, Ghebreghiorgis said during a recent news conference recounting what happened that night. Marchers were singing and dancing down the streets, and supporters from surrounding apartments banged pots and pans while hanging out their windows.

Yet, as police corralled the protesters together, many started to panic.

Mott Haven is about 27 percent Black and 67 percent Hispanic, according to New York University’s Furman Center. The report claims the neighborhood has long experienced over-policing and use of physical force by law enforcement — something observers said carried over into the protest.

“We take strong exception to the subjective characterization of our police actions to maintain public order as ‘a planned assault,’” Detective Denise Moroney, an NYPD spokeswoman, told The Riverdale Press.

Jennifer Scarlott, who heads North Bronx Racial Justice and has organized dozens of gatherings in support of racial justice and against police violence at the Riverdale Monument, said protests held locally — where a much larger percentage of the population, and, generally the protesters, are white — have had much different experiences with police.

Scarlott and fellow organizers don’t usually seek permits for protests or gatherings, feeling that they have all the permission they need in their Constitutional right to assemble.

“We feel that it’s counterproductive, actually, to seek permits,” Scarlott said. “The NYPD tends to have very conflicting rules about the extent to which one can use magnified sound, etc. — Completely conflicting so that it’s hard to know, on any given day, what they’re feeling tolerant of.”

Scarlott’s protesters aren’t out to “battle” with the police, she said, but also aren’t seeking their permission to protest.

During an August demonstration, protesters marched down Broadway to the 50th Precinct. While Scarlott thought there may have been some plainclothes officers hanging around, no squad cars followed the group. No one asked them to stop, and only a few gathered outside the precinct to watch when they gathered across the street.

“I have no doubt whatsoever that there’s a difference of treatment, and that it has to do with demographics, skin color,” Scarlott said. “The organization of the NYPD is fragrantly racist and violent, and I’m not afraid to say so. It’s been demonstrated over and over again.”

Human Rights Watch isn’t just complaining about what happened June 4. It also has several recommendations for local lawmakers — including reducing the role of police in societal issues, and investing in communities like Mott Haven. They also suggest building back up the Civilian Complaint Review Board, the body responsible for investigating complaints against the NYPD.

“Mayor de Blasio and Commissioner (Dermot) Shea were praising the police for their operation,” Ghebreghiogis said. “Saying, ‘Flawlessly executed, this was a group that intended to inflict harm and cause violence.’ But if you see what happened, you see the mass arrests and abuse they inflicted that day in Mott Haven — it shows that police can use any spurious claim to act with impunity.