Fastest runners took to Vannie to compete in regionals 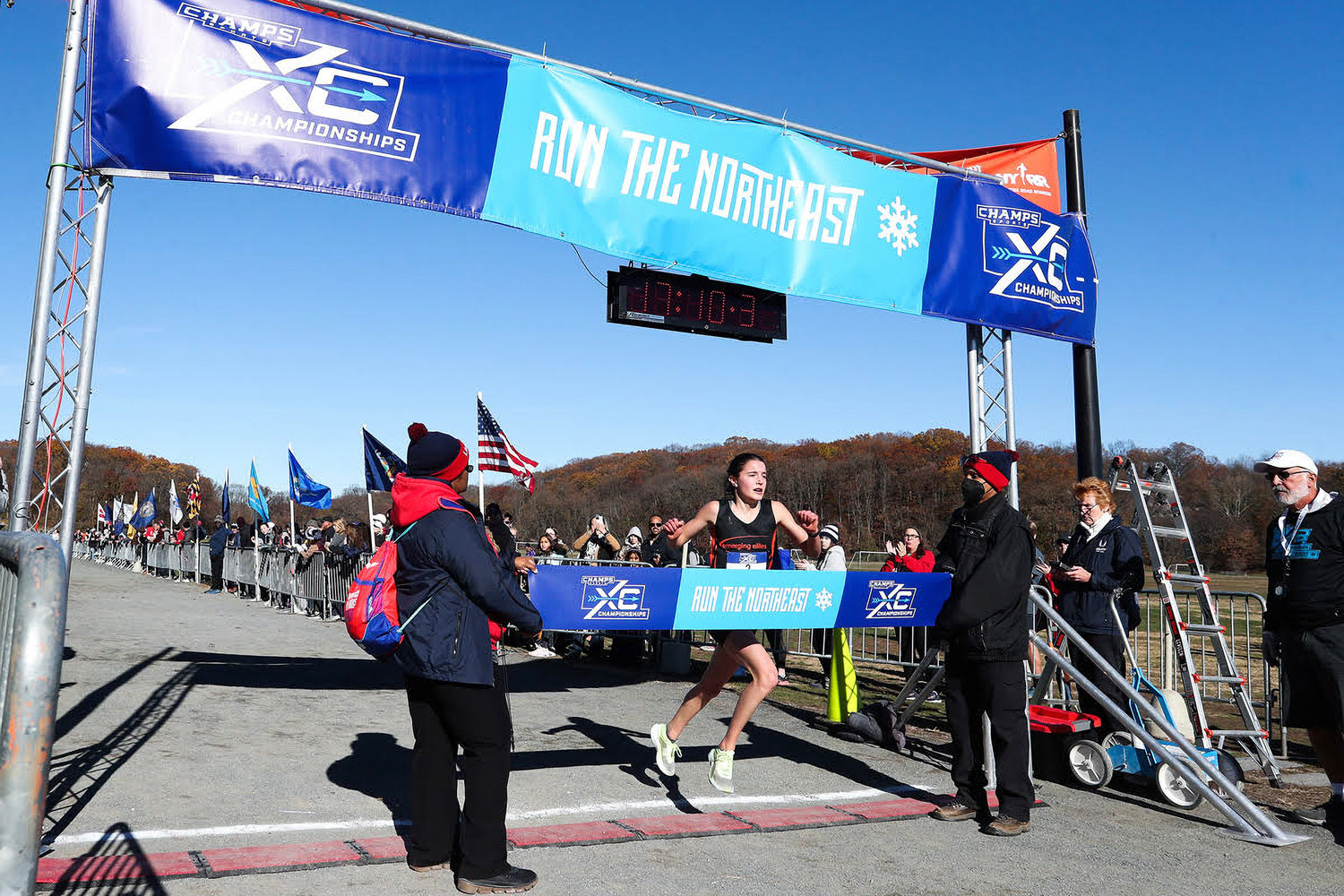 Ellie Shea of Belmont High School in Belmont, Mass. crossed the finish line at 17:10 to win the girls championship at the 43rd Annual Champs Sports Cross Country Championships Northeast Regional held at Van Cortlandt Park on Nov. 26. Shea, along with Cornwall’s Karrie Baloga who finished second, are among the 10 female runners who qualified for the national finals set for Dec. 10 in San Diego.
Photo courtesy of PhotoRun.,net 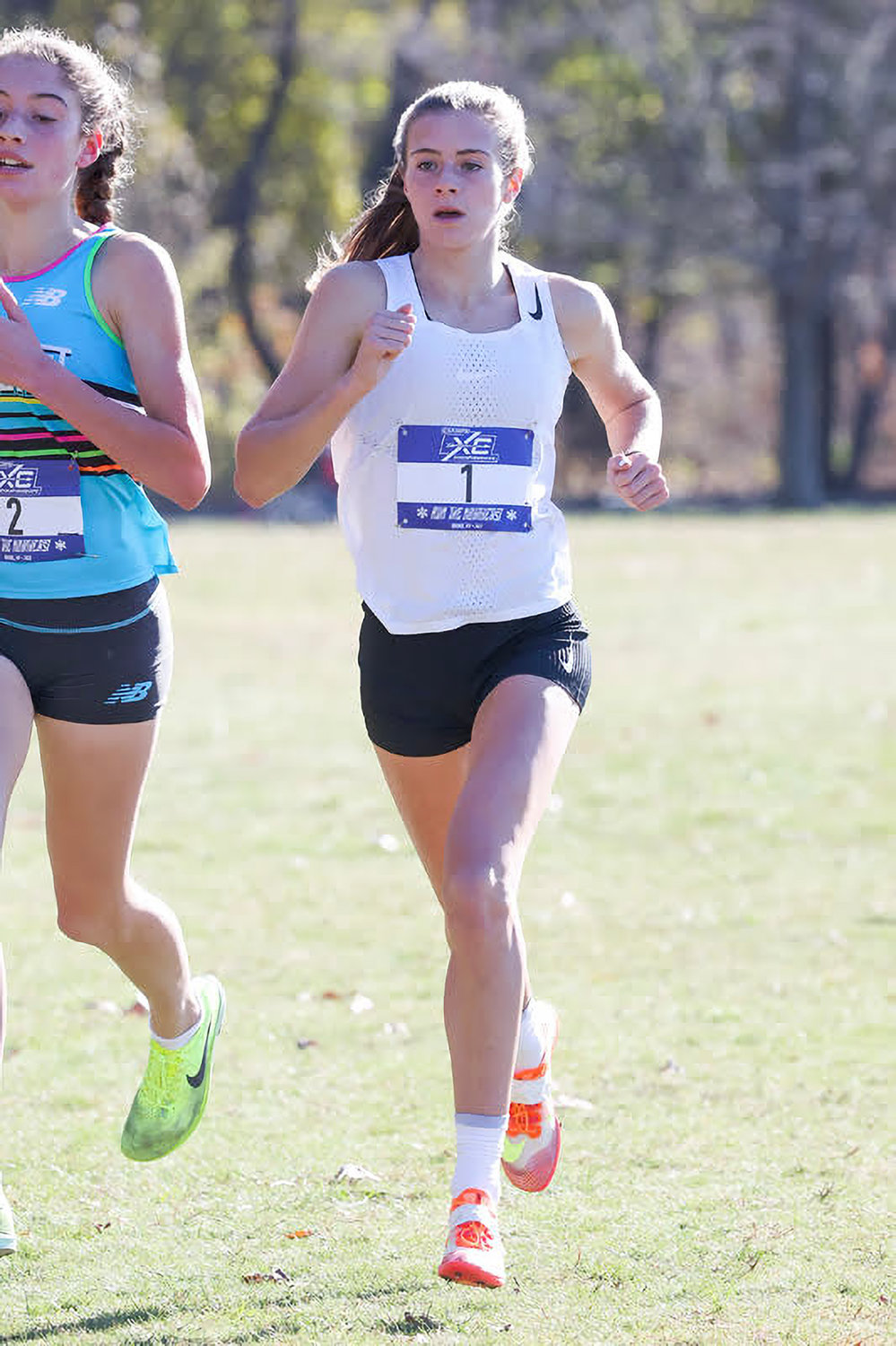 Karrie Baloga made her return to Van Cortlandt Park after competing in the Manhattan College XC Invitational on Oct. 8. Baloga, who has committed to run at the University of Colorado, finished in second place this time around after securing a margin of victory of 16 seconds at the Manhattan Invitational. The race was a tune-up for her and several others who qualified for San Diego.
Photo courtesy of PhoitRun.,net
Previous Next
By Pete Janny

The fate of every top cross country runner in the Northeast came down to the historic course at Van Cortlandt Park on Saturday. For one last time in 2022, the flats of the parade grounds and the rigors of the back hills were front and center. Runners from 11 states and Washington, D.C.,  looked to leave their mark where legends like Steve Prefontaine and Alberto Salazar once left theirs.

Only 10 runners from the boys and girls races were able to punch their tickets to nationals, which will be held in San Diego on Dec. 10. With the chase on to compete against the nation’s best, it was Drew Griffith of Butler High School in Pennsylvania and Ellie Shea of Belmont High School in Massachusetts who prevailed and won their respective 3.1 mile races. Griffith recorded a time of 15:20.9 to win the boys race, while Shea cruised to a time of 17:10.7.

“My time was pretty close to what I thought I could run, but to be honest I wasn’t too focused on the time,” Griffith told The Riverdale Press. “I just really wanted to get into that top 10 and that was the main goal.”

Having some familiarity with the course’s rugged terrain which overcuts the Major Deegan Expressway never hurts either. Griffith made the most of his experience with the course, and even relishes the challenges posed by the back hills.

“My favorite part of the course would definitely be the hills,” Griffith said. “They throw some challenges into the race that others may not be as ready for.”

Getting to San Diego was a repeat goal for many. Shea, along with the girls second and third-place finishers, Karrie Baloga of New Windsor, New York, and Zariel Macchia of Shirley, New York, will all make back-to-back appearances at the premier event.

Meanwhile, Baloga will make the trip out West for the third time, including her freshman year in 2019. Baloga was no stranger to the Vannie hills, running the Manhattan College XC Invitational in October, which she won in back-to-back years. While running the back hills, Baloga admitted this time it felt different — and for special reasons.

“At one point it hit me that it was going to be my last time running,” said Baloga, whose performances at the course in recent years helped put her on the map.

“I really just tried to soak it in and have as much fun as possible, and be in the moment and just enjoy it.”

Baloga calls New Windsor home, which is situated about an hour north of VCP. The unique charm of Vannie is that it affords her the hillier conditions similar to where she is from.

According to Baloga, a well-traveled runner in her own right, every region likely offers something different in terms of the makeup of their courses.

“The terrain compared here to down in the city is not too different,” Baloga said. “We’re really used to the more hillier courses, but I’m sure if you come from a different part of the East Coast (to VCP), it’s probably a little different than what you are used to.”

Baloga had raced against Shea before and knew she was going to be a name to look out for again. Instead of concerning her thoughts with competitors, Baloga focused on running the type of race that would give her more confidence and, most importantly, set her up for one last race in San Diego after taking fourth place nationally a year ago.

“I looked at the Van Cortlandt race to run my own race, keep the confidence going, and stay fearless,” said Baloga, who ended with a time of 17:24.9. “All I had to do was qualify so the pressure wasn’t too much.”

The boys championship had a little more drama at the finish line, despite the low stakes between finishing first and second.

Griffith, only a junior, was trailing Sam Burgess of Framingham, Massachusetts, with 50 meters left until he put on the jets and beat the runner who is committed to run for Harvard next fall.

“It was a lot of fun on the final straightaway,” said Griffith, whose college recruitment is wide open. “It’s not every day you get to face such high level competition.”

The rest of the way will demand Griffith’s best, like it will for the other runners who descend on San Diego’s Morley Field in 10 days.

He is soaking in every moment ahead of the biggest race of his career thus far.

“I want to place as high as I possibly can but mainly just go out there and have some fun,”  Griffith said. “An experience like this doesn’t come around too often.

Baloga will take her talents to the University of Colorado next year where she will run for the Buffaloes and major in communications. In her eyes, there was no passing up the opportunity to run for the PAC-12 school.

“They’ve had many pros go through the program and the coaches are amazing,” Baloga said.

Whereas Vannie makes runners earn their clout, San Diego is where legends are made. The mystique is almost tangible.

“You feel the history behind the course, so many great runners have gone through there, “ Baloga said of Morley Field. “It’s really awesome being able to say, ‘Wow,  I am in their shoes.’”