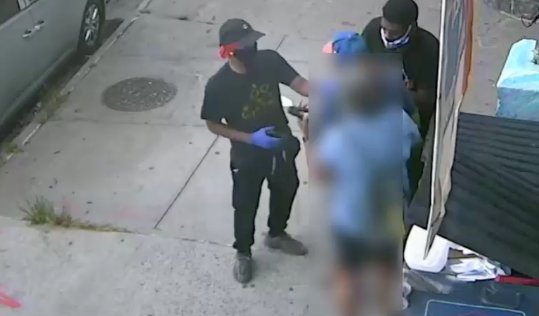 Police are looking for three men they say have hit the Bronx in a string of streetside jewelry robberies.
Courtesy of NYPD
By MICHAEL HINMAN

Police are investigating a string of gunpoint robberies that have plagued parts of the Bronx in recent weeks, including two incidents in Kingsbridge that cost local victims more than $4,000 in jewelry.

A 45-year-old man said he was walking near the corner of Albany Crescent and West 231st Street in the early morning hours of Sunday, Aug. 23, when two men walked up to him, flashing a black firearm, according to police. They ran off with the man's jewelry and some other unidentified property valued at $3,000.

The following Wednesday, the same two men appear to have struck again, this time in broad daylight in front of 3414 Bailey Place. This time they targeted a 66-year-old man with a silver firearm.

They took his jewelry, according to police, valued at $1,000, but escaped in a black Honda four-door sedan just before 5 p.m.

There were no injuries in either incident.

The two heists are part of a series of similar robberies in the borough beyond the 50th Precinct. They include an attack on a 51-year-old man and his female companion on Aug. 20 on Byron Avenue in Wakefield.

There the two men brandished a black gun, taking a necklace from the man valued by police at $7,000.

The two men returned to Wakefield Aug. 31, this time with a third person, and targeted a 43-year-old man, taking $13,000 in jewelry as well as his car keys.

A short time later, on that same day, the three men moved to Gleason Avenue in Soundview, showing a black gun to a 32-year-old man, taking jewelry and personal property worth $8,000.

There have been no injuries in any of the incidents, except for the first reported robbery on Aug. 18 near Grant Highway and West 169th Street, where Mount Eden and Highbridge meet.

There, a 66-year-old man was approached from behind and had his jewelry removed. The man suffered pain and bruising, police said, but refused medical attention.

Video of the three men is available by clicking here.

Tips also can be submitted by logging into the CrimeStoppers website at NYPDCrimeStoppers.com, or on Twitter at NYPDTips.