RoseAnn Hermann will wait for ‘roses’ 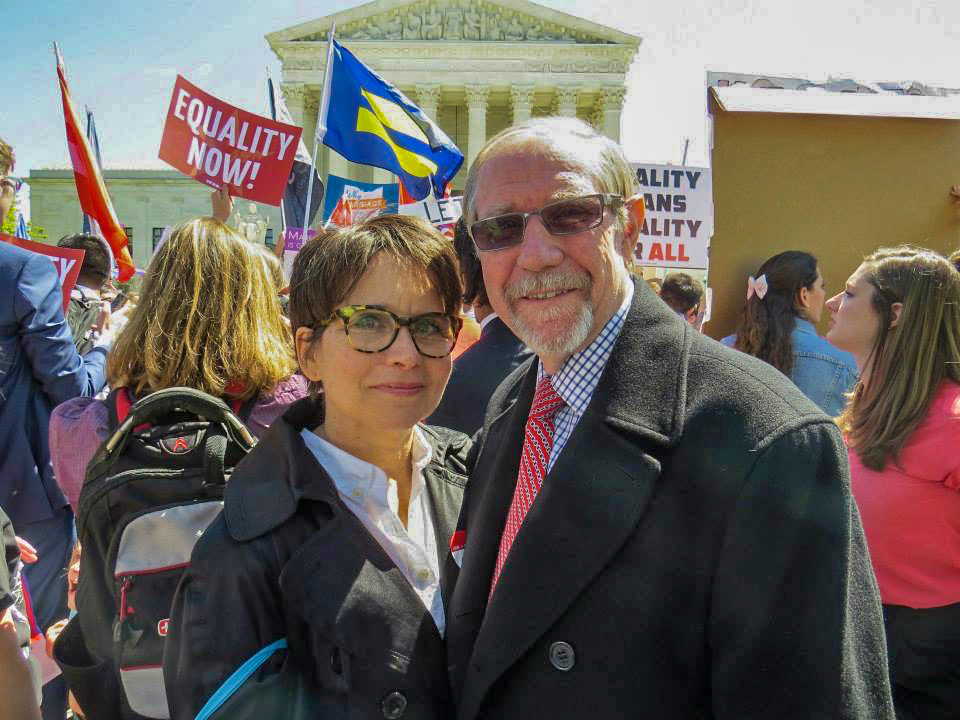 George and RoseAnn Hermann have been fighting for LGBT rights for many years. And they’ve seen those rights come a long way — including this moment just before the landmark U.S. Supreme Court decision in Obergefell v. Hodges, which legalized same-sex marriage on the federal level in the United States.
Courtesy of George and RoseAnn H 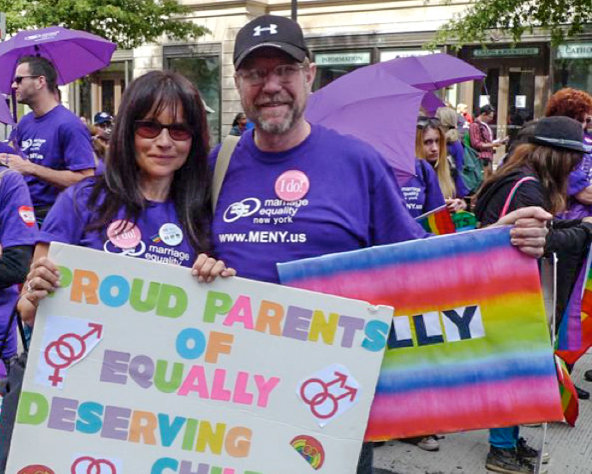 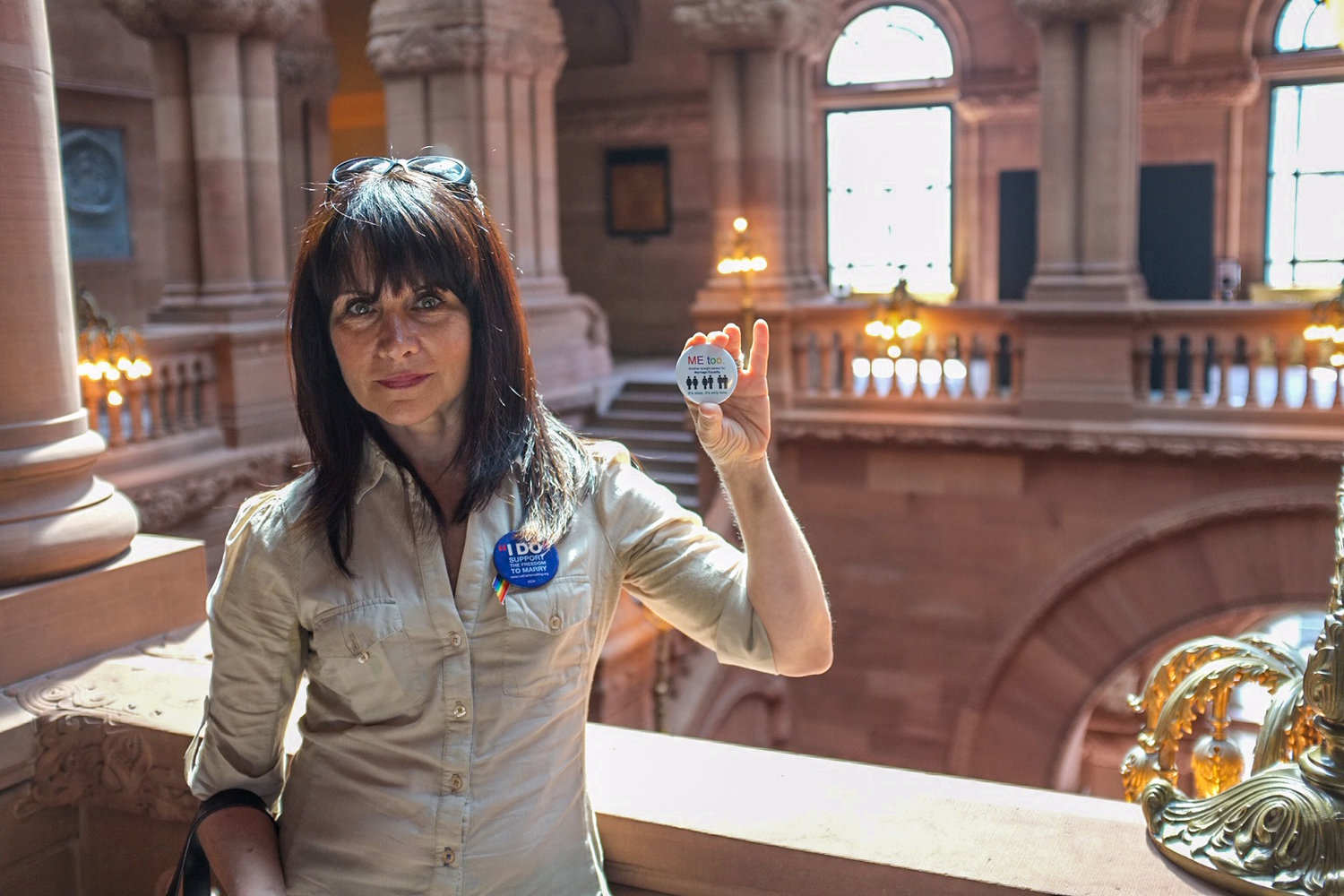 While she and her husband have been to several marches in Washington, much of RoseAnn Hermann’s advocacy for LGBT rights took place at the local level. She was a member of both Marriage Equality New York and the Empire State Pride Agenda, which advocated for marriage equality in New York —and ultimately legalized same-sex marriage in the state in 2011.
Courtesy of George and RoseAnn H
Previous Next
By ROSE BRENNAN

When RoseAnn Hermann was young, the word “gay” — or anything similar to it — was rarely uttered aloud. And when it was, it was usually to make fun of people.

Public attitudes toward the LGBT community have since changed dramatically. Same-sex marriage was legalized on the federal level in 2015, although many states like New York legalized it well before then.

But that wasn’t the case when Hermann’s three children were young. And it was with her children that Hermann’s advocacy for LGBT rights began.

Two of her children are gay, and while she credits her children’s identities with helping to jumpstart her advocacy, Hermann likes to think her support would’ve been there regardless.

“I would like to believe that I would have been involved anyway, as a humane part of being interested in civil rights,” Hermann said. “It’s a civil rights issue. It’s strictly about people having the same civil rights as everyone else, because particularly in this country, you don’t have to have a religious marriage.”

Religion might not necessarily be a key component of marriage in America, but it typically plays a central role. Sometimes, religious beliefs might stand in the way of LGBT support, especially if their religion condemns homosexuality.

But Hermann doesn’t think being religious and supporting the LGBT community need to be mutually exclusive. They can coexist, especially since religious texts are clearly open to interpretation.

“Sometimes religious texts reflect the time they were written in, and things change,” Hermann said. “And so it’s no longer relevant to this day and age. And there are lots of examples of that, where people would say no to one thing but accept something else.”

Since her family’s advocacy for LGBT rights began, Hermann and her husband George have vocalized support, both here in New York and beyond. They joined the March for Equality in Washington in 2009, and returned again in later years for what would become two landmark U.S. Supreme Court decisions — United States v. Windsor, which ruled unconstitutional the Defense of Marriage Act that essentially banned same-sex marriage in the 1990s, and Obergefell v. Hodges, which legalized marriage no matter what the couple’s gender at the federal level.

The Hermanns don’t like referring to it as “same-sex marriage,” because to them it’s just all marriage, but chalking up a victory there didn’t mean the fight was over. They’re still going strong five years later, especially with so much work needed to achieve what Hermann believes is true LGBT equality.

Public opinion might be shifting when it comes to sexuality, but obstacles still remain, especially when it comes those who identify as transgender. Debates about who should use what public restroom or locker room remains all too common. Many states don’t even protect people on the basis of gender identity. And just last year, President Donald Trump ruled openly those in the transgender community could not serve in the military.

Hermann, a real estate practitioner with Brown Harris Stevens, believes the most change happens at the local and state level. Early on, she worked with Marriage Equality New York, the state chapter of Marriage Equality USA, which sought the legalize same-sex marriage in all 50 states — a group that disbanded in the most successful way possible since its goal was achieved.

Hermann also worked with the Empire State Pride Agenda, which fought for LGBT rights and marriage equality until it disbanded in 2015 after Gov. Andrew Cuomo issued an executive order intended to protect transgender rights.

For many years, Hermann fought for LGBT issues in her own backyard. And while people might be quick to label New York as a bastion of liberal social values, it’s still facing its own issues in the LGBT realm.

“There are lots of issues that are relevant to us,” Hermann said. “An example is surrogacy. It’s still not legal in New York state, and surrogacy matters to a wide number of people, not just gay men who might want to use a surrogate” as a way to raise biological children of their own.

All that work isn’t about recognition, Hermann said, but to help create a better world for her children and others under the LGBT umbrella. Yet, that doesn’t mean recognition doesn’t exist.

The Hermanns were set to be honored by the newspaper Gay City News with an Impact Award. But, of course, the coronavirus pandemic had other plans, delaying the Impact Awards from March to late September. But even then, with COVID-19 calmed down in the state for the most part, the Hermanns opted not to attend, instead deferring their award until next year when they can celebrate with family and friends who were instrumental in their years of LGBT advocacy.

While their awards may have been delayed, the Hermanns’ fight for equality continues.

“If you get involved and do this, you will see results,” RoseAnn Hermann said. “It doesn’t happen when you don’t have people fighting for it and doing it. It’s methodical, and there’s a variety of ways that people do various things. And all together, you create a critical mass and it does happen.”