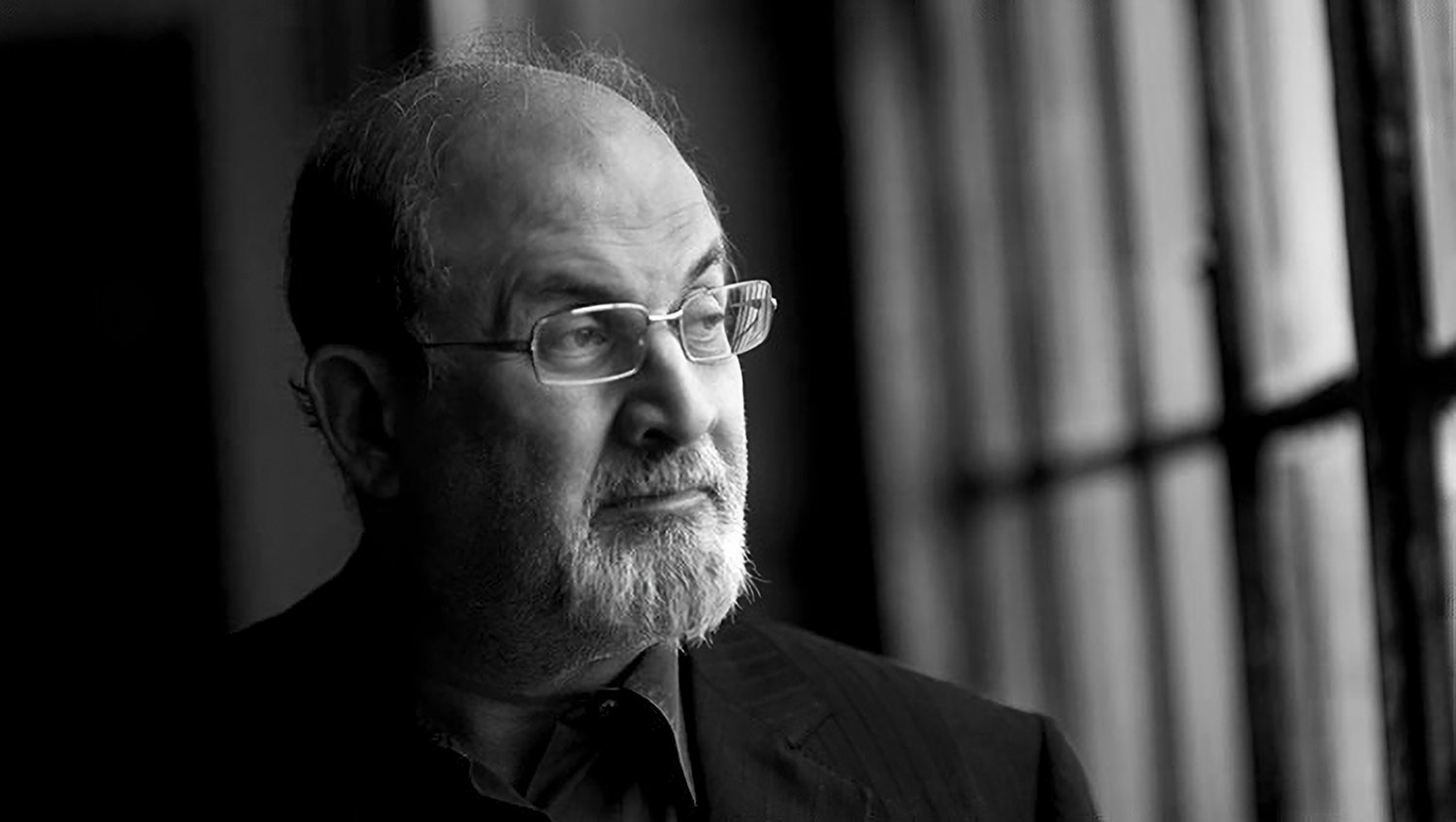 Salman Rushdie, the renowned and controversial writer, was attacked as he was about to give an interview at Chautauqua Institution outside Buffalo. The attack evoked memories of the 1989 firebombing of The Riverdale Press offices about a week after a Buddy Stein, former editor and publisher of The Press, wrote an editorial admonishing national book chains for pulling Rushdie's "Satanic Verses" book from its bookshelves. 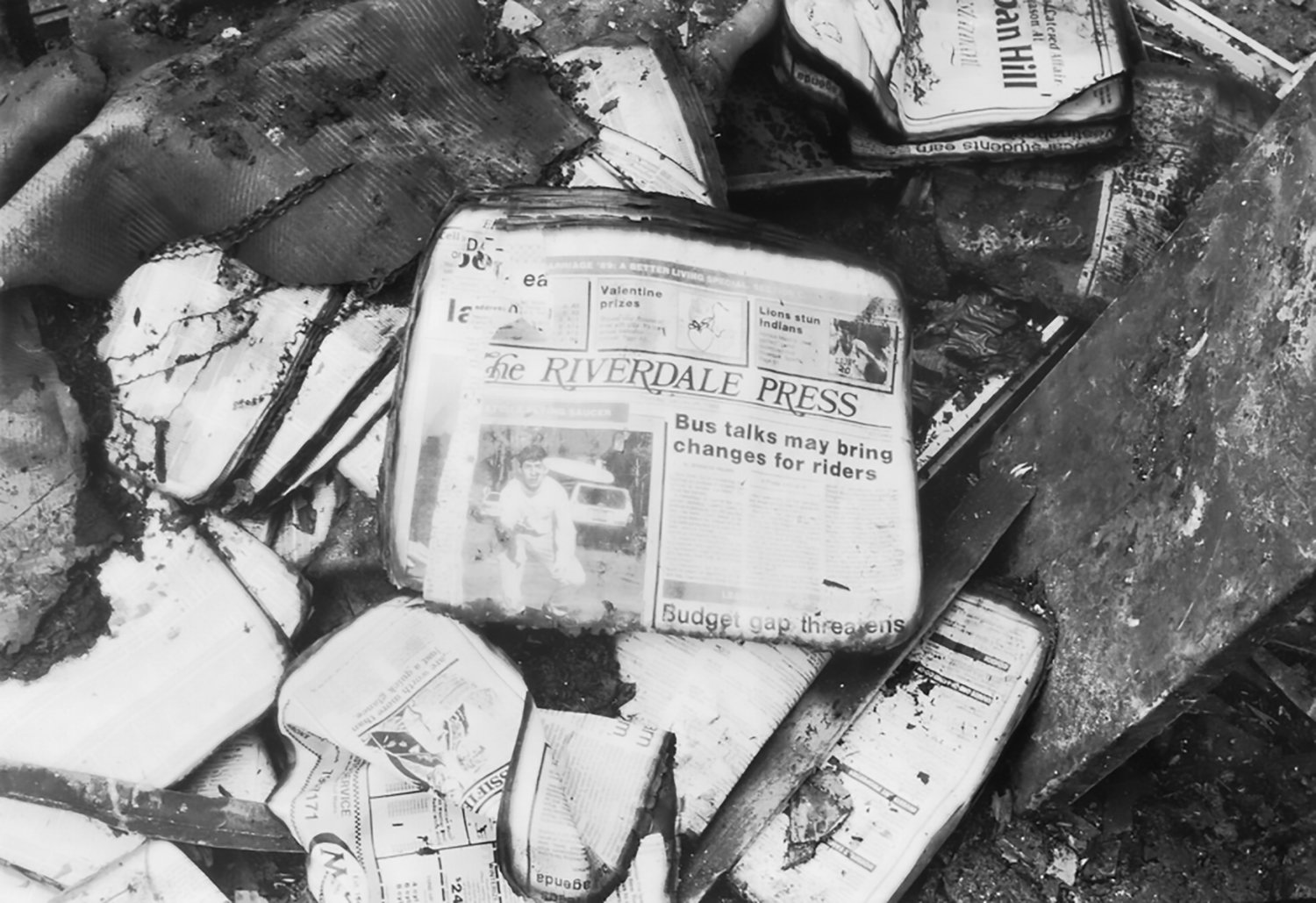 The last time author Salman Rushdie made the news like the knife attack against him last week, the Broadway offices of The Riverdale Press were firebombed.
GRETCHEN MCHUGH /file
Previous Next
By Gary Larkin

Buddy Stein was horrified when he heard the news.

Renowned author Salman Rushdie was seriously injured, on a ventilator, after a man attacked him with a knife last week at the Chautauqua Institution just outside of Buffalo.

“Although I met Rushdie only once, and briefly,” Stein said, “I feel a connection.”

That meeting came after the then-Broadway offices of Stein’s paper — The Riverdale Press — had been firebombed in 1989, just days after the paper ran an editorial criticizing major book chains for pulling Rushdie’s controversial novel, “The Satanic Verses,” off the shelves.

Although police and even federal investigators were never able to fully link that attack with the editorial, they ultimately concluded it was highly likely the firebombing was a direct result of the editorial supporting the man who Iran’s Ayatollah Khomeini wanted dead because of Rushdie’s depiction of the Muslim prophet Muhammad in his book.

Rushdie escaped that fatwa, and while he spent early years in hiding, these days — with Khomeini long dead — he is no stranger to public appearances.

He had just taken the stage on Friday for a talk at the education center when police say Hadi Matar, 24, jumped on stage and started stabbing the 75-year-old author.

Rushdie was rushed to a hospital just across the Pennsylvania border, and while he is now off the ventilator, reports are they he suffered wounds to his neck and liver among other places, and could lose an eye.

Matar pled not guilty to all charges over the weekend.

All of that resurfaces the decades-old hoopla surrounding Rushdie, and the ripple effects that had on a number of communities, especially North Riverdale.

Stein’s 1989 editorial — reprinted on this week’s Opinion page — expressed fear for Paperbacks Plus, a Riverdale Avenue bookstore where Corner Café now sits. While chains like Barnes & Noble and Waldenbooks pulled “Satanic Verses” off the shelves in fear of violent reprisals, Paperbacks Plus held firm — moving the target to them and away from the big chains.

Instead, it was The Press that was attacked in the very early morning hours of Feb. 28, when someone threw Molotov cocktails through the newspaper office’s front windows, destroying the newsroom. No one was ever arrested in the firebombing.

But it didn’t silence The Press. In fact, the paper didn’t miss a step. It published as scheduled the next day, and an editorial that had originally been read by 13,000 or so people, was suddenly being read by millions as nearly every community newspaper in New York and dozens around the country reprinted it. U.S. Sen. Daniel Patrick Moynihan also had it printed in the Congressional Record.

Nine years later, Stein won a Pulitzer Prize for editorial writing on politics and other issues, including an editorial with the headline “Why Rushdie matters.”

“I admire him as a brilliant writer, as well as a tireless and eloquent defender of freedom of expression,” Stein said, “not just as a key democratic principle, but concretely when artists are attacked or censored.”

The Chautauqua attack did evoke memories of the attack on his family business in 1989.

“I lived with fear for a few weeks after our building was firebombed and death threats began arriving in the mail,” Stein said, adding that he could only imagine what it would have been like if Twitter had been around then.

“But Rushdie had to walk in that shadow for the better part of three decades. Although, happily, he decided, as he said, to live his life, he must have known that he was never out of danger.”

Rushdie would spend years following the fatwa championing not only freedom of speech, but also human rights. He spent time as president of Pen America, a century old organization that fights for both free expression and human rights.

The group’s current chief executive, Suzanne Nossel, was vocal about her anger at the latest news, saying the people at Pen America is “reeling from shock and horror at word of a brutal, premeditated attack on our former president and stalwart ally.”

“We can think of no comparable incident of a public violent attack on a literary writer on American soil,” she said. “Just hours before the attack, on Friday morning, Salman had emailed me to help with placements for Ukrainian writers in need of safe refuge from the grave perils they face. Salman Rushdie has been targeted for his words for decades, but has never flinched nor faltered.”

Gov. Kathy Hochul, who was speaking at an anti-gun violence event at the time of the stabbing, issued a statement praising Rushdie as someone “who has spent decades speaking truth to power. Someone who’s been out there unafraid, despite the threats that have followed him his entire adult life.

“We are undeterred in our commitment to make sure that we call it out — we condemn what happened, we condemn all violence — and we want people to feel that freedom to speak and to write truth.”

Stein doesn’t purport to know exactly why Rushdie was attacked, but the way things are going in the country, he is not surprised.

“Think of what we Americans face these days,” he said. “A former president who sows hatred. A democracy unraveling. Armed bigots parading in public. Their offspring, the disaffected young assassins who murder school children and churchgoers and supermarket shoppers.

“I wouldn’t say that these phenomena led directly to the assault on Rushdie, but they do provide a context in which a young man who wasn’t born when ‘The Satanic Verses’ was published — and who I’ll bet has never read a page of the novel — can feel justified in setting out to murder its author.”