Ruth Mullen: Political activist, and so much more

Whether it was activism, publishing or film, this nabe leader made a major impact 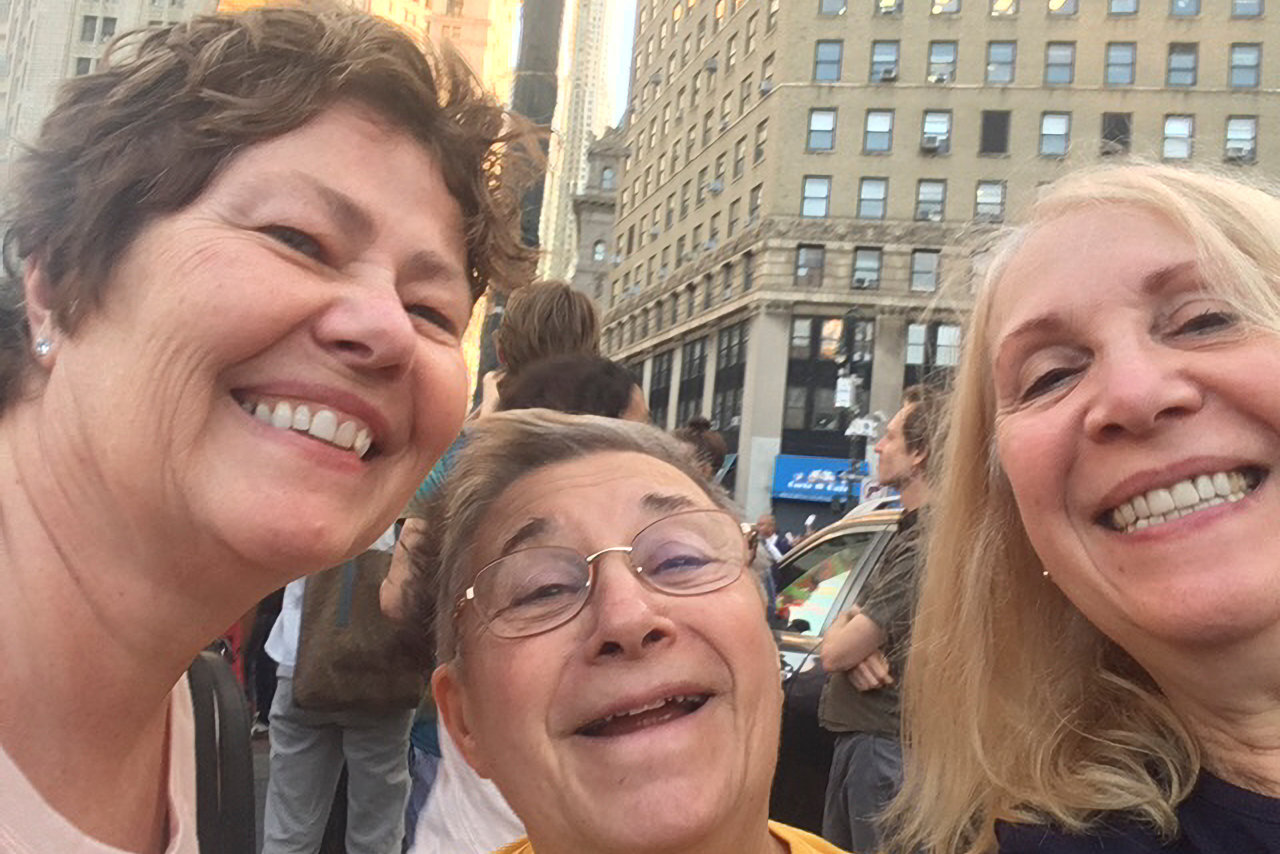 Ruth Mullen — who was killed last week when crossing Johnson Avenue — was an active with the political social group Riverdale Huddle, says member Elizabeth Cooke-Levy, often prodding her fellow huddlers to move from conversation to action.
Courtesy of Judith Minkoff-Grey 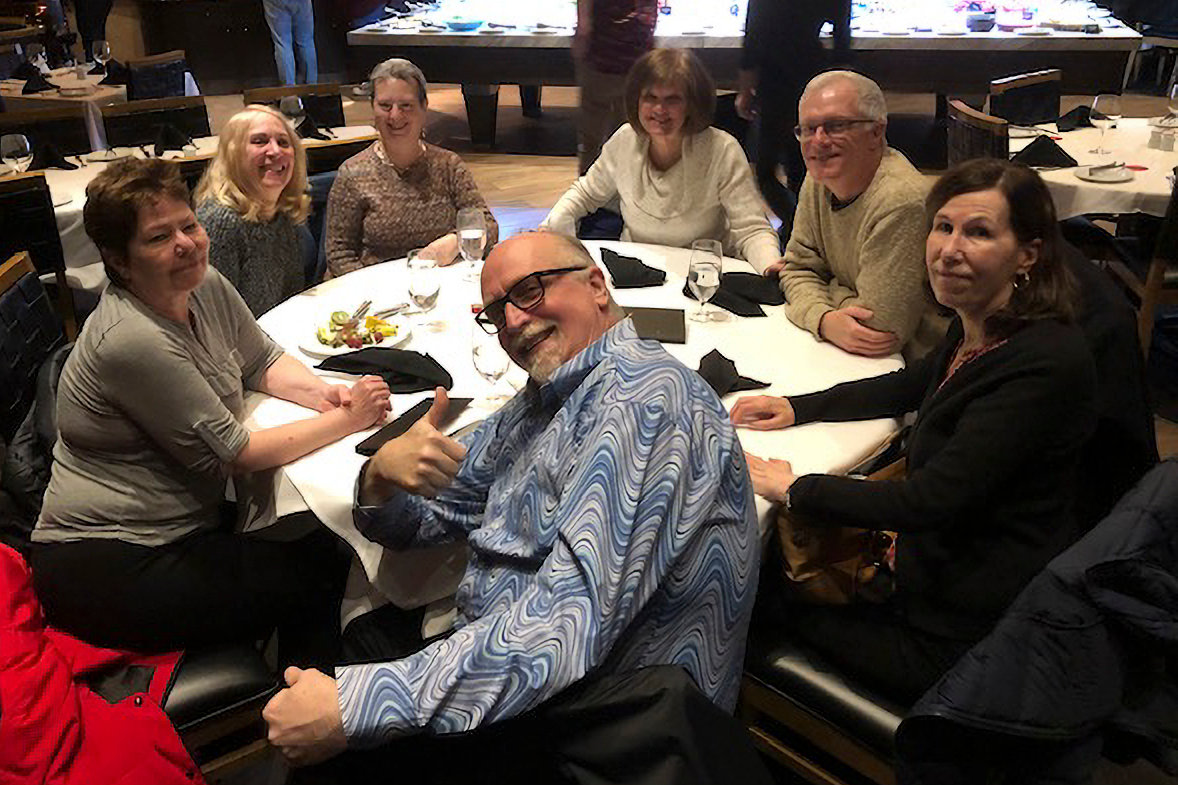 Elizabeth Cooke-Levy says Ruth Mullen led postcard-writing sessions with the political social group Riverdale Huddle to protest partisan gerrymandering. Now the women of the group mourn Ruth, who was killed last week after an express bus hit her as she crossed Johnson Avenue.
Courtesy of Judith Minkoff-Grey
Previous Next
By ETHAN STARK-MILLER

Ruth Mullen was known in many circles throughout her life. But in this corner of the Bronx, she’s probably best recognized for her strong political activism.

That may have been most visible when Alessandra Biaggi unseated Jeffrey Klein from the state senate three years ago. Ruth worked tirelessly on that campaign, husband Jim Bradley says, coordinating many of those efforts with the Riverdale Huddle — a local group of politically active women.

But Ruth’s life was tragically cut short last week while simply trying to cross the street in front of her Johnson Avenue home. Police say a Metropolitan Transportation Authority express bus was rounding what many consider a dangerous corner with Kappock Street at around 8:30 p.m., on Sept. 7, and struck Ruth in the crosswalk. Ruth was 68.

The incident was all the more devastating since Ruth advocated for traffic lights in this problematic intersection for many years. Instead, elected officials like Jeffrey Dinowitz secured a third stop sign for the intersection — one neighbor says buses and cars generally roll through anyway.

When news broke early Wednesday morning about Ruth’s passing, one of the first people to call Jim was the state senator.

“Alessandra told me that she wouldn’t have been elected without Ruth,” Bradley said. “When Alessandra was trying to decide whether or not to run, she met with the Huddle. And I remember Ruth getting back that day and saying, ‘She’s the one. She’s the one to do it.’ And she just threw all of her support behind her.”

Ruth was always politically active, Jim said. But it was Donald Trump’s surprise election over Hillary Clinton in 2016 that inspired her to step it up to a new level.

That election was a “life-changing moment for a lot of us,” Jim added. “But especially for her. I laid back and helped all I could. But she leaned in really hard.”

The Trump White House also inspired Ruth to join the Riverdale Huddle just a month after the now-former president was inaugurated — and only a few weeks after the group itself was formed. The Huddle became one of Ruth’s most beloved communities, Jim said, to the point where she never missed any of their weekly meetings at An Beal Bocht Café.

“There are other people who will talk about injustice, Ruth was not a big talker,” Cooke-Levy said. “When she spoke, she’d brief us on information relevant to a topic and suggest or even prod us to join her in volunteer efforts.”

Ruth, for example, was outraged about partisan gerrymandering when it came to drawing the boundaries of districts for elected officials, and she’d push to keep the topic near the top of the group’s agenda. She wouldn’t stop there, Cooke-Levy said. Ruth would host postcard-writing sessions in her apartment, using these hand-written messages from fellow Huddle members as a way to influence policy not just in New York, but other states that suffered under gerrymandering.

“She’d be keeping the whole thing cheerful and positive and welcoming,” Cooke-Levy said. “And at the same time, motivating all of these people to be there. She would move me from a rather distant caring about something, to actually showing up and participating in a volunteer effort about it.”

Ruth also spent many years as a poll worker, said another fellow Huddle member, Ellen Chapnick. Although not political, it demonstrated Ruth’s passion for securing and protecting people’s right to vote.

“And (she) really wanted people to have a voting system that was protected by people who were watching for integrity,” Chapnick said. “She would talk very knowledgably about the ballots and how they were good or weren’t good. And about petitioning.

But it wasn’t just like how sometimes people do from their heads. She cared deeply about the underlying things of all of this.”

Ruth was an especially powerful advocate for her neighbors at the Winston Churchill. She even ran to represent her 2500 Johnson Ave., building on the county committee, Chapnick said — a position she ultimately didn’t win.

“She had gumption,” Chapnick said. “If she thought that something needed to be done — even if it would anger some of the powers-that-be and make them mad at her — she did what she thought was right. She wasn’t going to be intimidated by people just because they were powerful politicians in the community. It didn’t interest her to pander to people.”

‘Loved by many people’

She was born and raised in Littleton, Colorado, a small city of 42,000 people located about 10 miles south of Denver. She graduated from Colorado College in the early 1970s, and soon after moved east to New York, earning her master’s degree in history from Columbia University.

After that, Ruth was really interested in two fields, Jim said — publishing and film. And she spent a considerable amount of time succeeding in both.

Ruth then shifted to film, getting her first job on the set of Sergio Leone’s 1984 crime epic “Once Upon a Time in America.” She moved up the ranks, Jim said, working in and eventually running the production offices of many prominent directors.

After film, Ruth returned to publishing, Jim said, working as a freelancer, editor and even a ghostwriter. She joined the board of the Editorial Freelancers Association in 2016, advocating for the labor rights of other contractors. She was elected co-executive of the association earlier this year.

Ruth met Jim while working on the set of Joe Stone’s 1990 independent film “Coupe de Ville,” which filmed in North Carolina with the likes of Patrick Dempsey and Alan Arkin.

“That’s how we met and fell in love,” Jim remembers.

“She was my best friend for 32 years. She was my life and my lover. And she was the person I went to when I needed hard questions answered. And I don’t have her now — and that’s very difficult.”

They moved into Winston Churchill in 1994, expanding their family by adopting daughters Lia and Maya.

No matter what part of Ruth’s life you look at, Jim said, her presence is felt everywhere — not just in the Spuyten Duyvil home they shared, but the community itself.

“She made a difference,” he said. “She was a force to be reckoned with. She had a really interesting varied and great life. And she was loved by many people.”