Non-classroom activity where young people can make a holiday difference 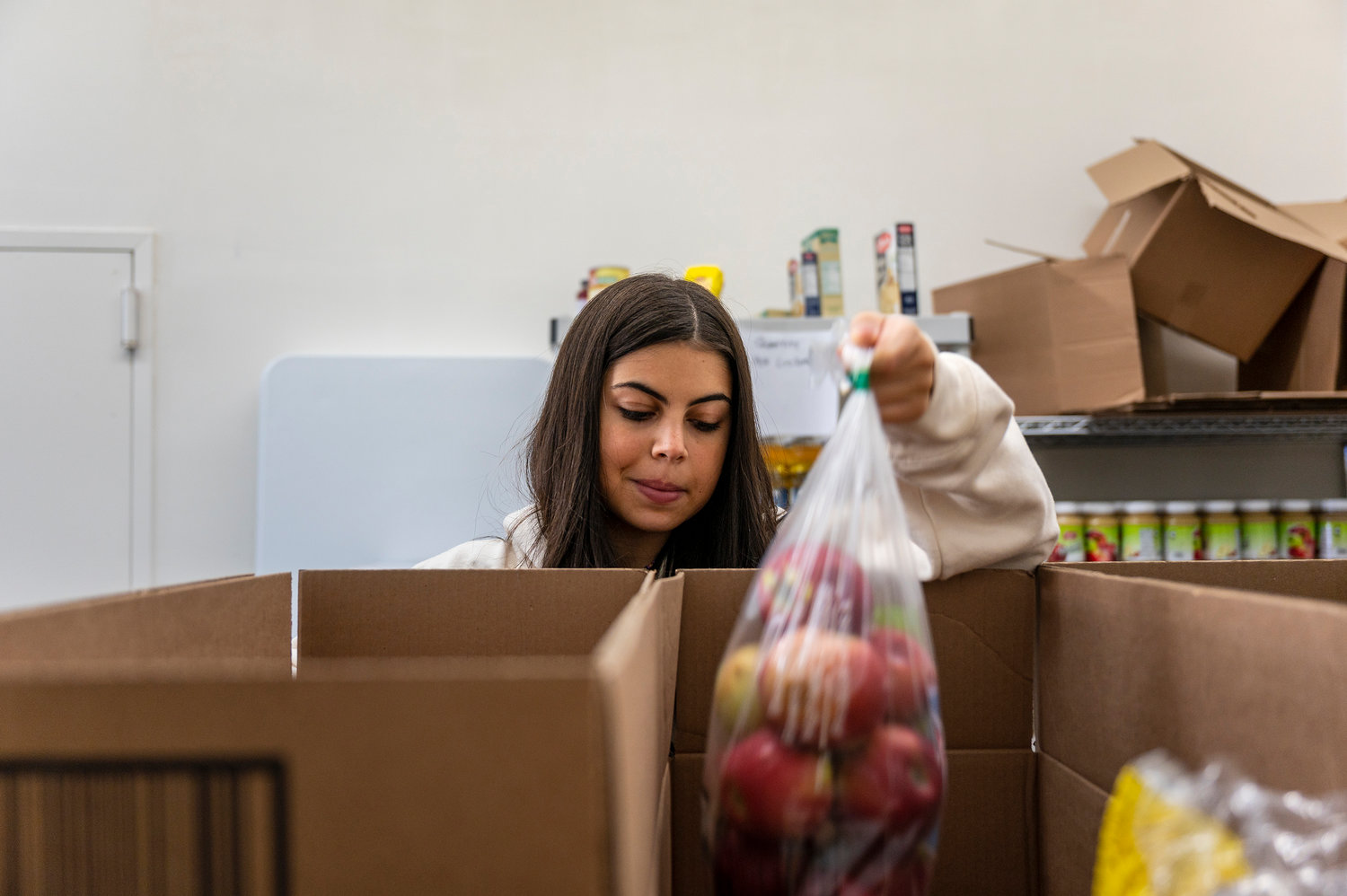 In total, students packed and delivered 70 boxes for Passover. The packing process is every Wednesday and Thursday — however, it continues into Monday and Tuesday for the holiday. Deliveries are made after school by students and teachers. The food pantry had become an educational experience for most because they did not know that food insecurity existed in their own neighborhood.
Hiram Alejandro Durán 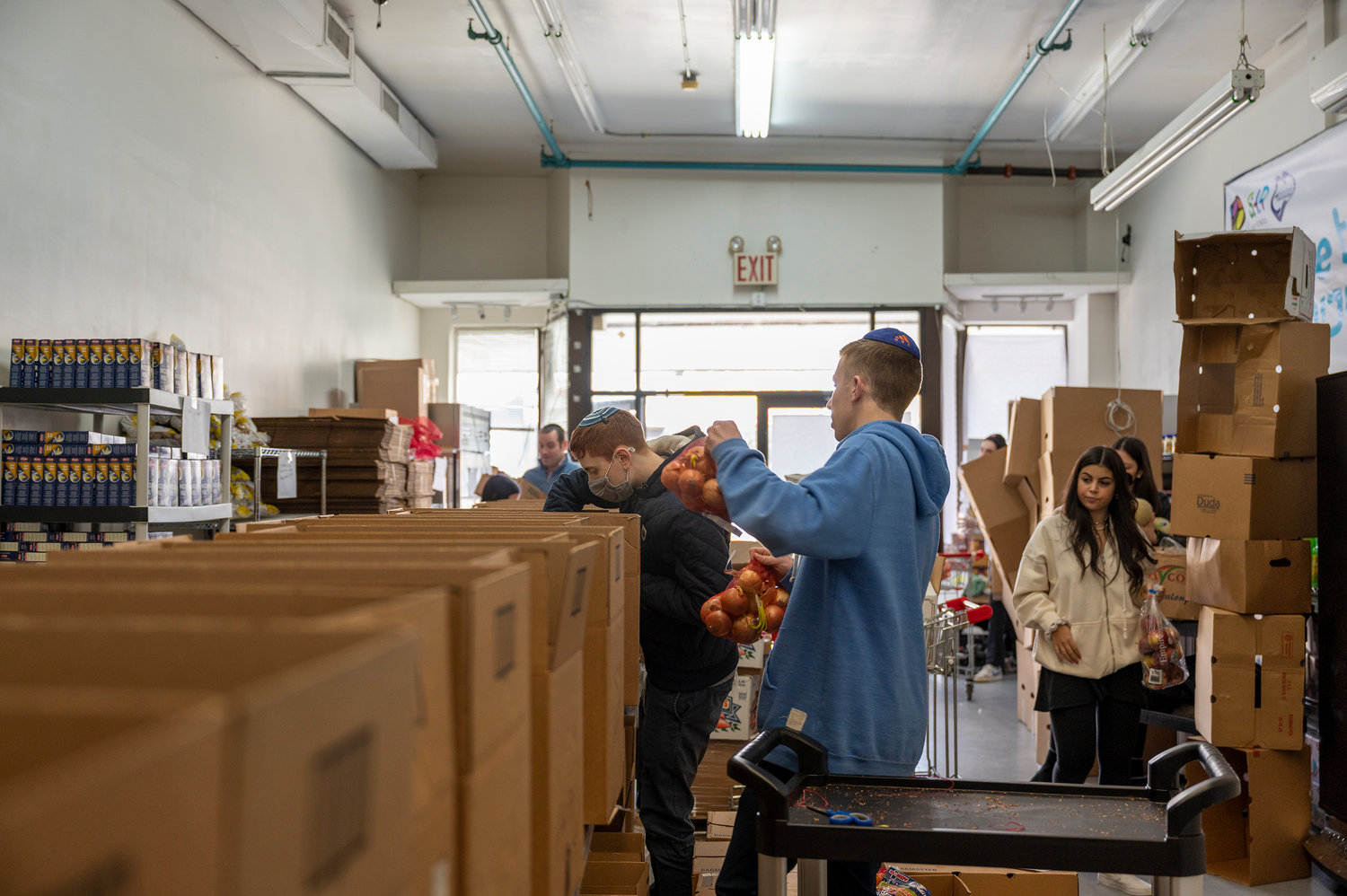 In total, students packed and delivered 70 boxes for Passover. The packing process is every Wednesday and Thursday — however, it continues into Monday and Tuesday for the holiday. Deliveries are made after school by students and teachers. The food pantry had become an educational experience for most because they did not know that food insecurity existed in their own neighborhood.
Hiram Alejandro DurÃ¡n
Previous Next

‘Coming down to the pantry and packing from people who do need to think about what they’re putting in their cart was like really meaningful for them.’”
ZAHAVA SEIDMAN, SAR chesed coordinator
Why are prices up?

Food insecurity can get even higher.

Currently, grocery prices are predicted to go up a maximum of 5.5 percent, which Americans did not see in decades.

The alarming increase might be scary for many individuals who were already unable to afford it when prices rose for the first time in 2021.

Poultry and meat are a product of festivity in many cultures. However, according to the U.S. Department of Agriculture, prices could jump as high as 16 percent.

This Passover some SAR High School students are taking time out of the annual ritual of preparing their homes for the Seder to clean and restock the school’s Passover Pantry.

For the second year, students have cleaned the pantry and restocked it with Passover-certified food on campus. The principal of SAR High School, Rabbi Danny Kroll, and Zahava Seidman, chesed coordinator of the school, co-run the student-led Kingsbridge Center for Israel food pantry.

“I think it’s very unique,” Kroll said. “I think they (students) were relatively unaware of food insecurity within the Jewish community.”

Seventy different deliveries were sent for Passover this year — about 25-30 a week — and many students delivered in neighborhoods where they live themselves. The students did not realize that food insecurity is in their own neighborhood, and it is kept quiet.

“It’s like it’s your neighbor,” Seidman said. “It’s your best friend’s uncle or aunt like, you don’t know who it is, and it’s in our community.”

The students didn’t realize they live a very privileged lifestyle where products they pack for others they have in their house, Seidman said.

Food that is packed is divided into three categories: Perishables, non-perishables and Passover products, such as matzoh, potato starch and matzoh meal.

As students shop for Passover with their parents, they take products off the shelf and put them in their shopping cart without worrying about the price.

“Coming down to the pantry and packing from people who do need to think about what they’re putting in their cart was like really meaningful for them,” Seidman said.

The High School set up its pantry to look like a mini-supermarket where there are shelves and a refrigerator for the people who want to come and do in-person shopping. Kroll recommends the in-shopping experience because the individual has a more extensive selection and personalization than standard package delivery. However, Seidman says it’s based on a comfort level.

People can “shop” at the pantry after school hours.

Some are a bit embarrassed about being poor and having to come to the pantry to get food for their Seder. “But I think even the idea of like going for some people might be hard,” Seidman said.

However, through the Kingsbridge center’s sign-up sheet allows “shoppers” to communicate any food restrictions. On the form, a shopper would include the size of their family to determine the size of the food delivery box.

Seidman said Pelham Parkway is probably the most challenging delivery area because it is almost a half-hour away from the pantry and student drivers need to find parking if they are alone.

“We have one boy who goes to Pelham Parkway every single week,” Seidman said, “He like knocks on the door goes into the apartment with the person (an elderly family) and unpacks (the food) into the fridge for them. Which is like incredible.”

The school has a large group of students helping out, and the pantry has become a part of the school curriculum. Each grade is split up into 15-18 advisories. Each advisory includes 10 students who pack in the pantry every Wednesday and Thursday. However the special deliveries continue until Tuesday. The school excuses students from their assigned class during the period when they leave with their advisor.

“They feel like they’re really making a difference in what they’re doing,” Kroll said.

The school partnered with the Metropolitan Council, who funded the pantry since Thanksgiving of 2020. Last Tuesday they delivered the Passover items to the pantry.

The pantry was not always on campus, it was located in the center’s pantry in Kingsbridge and then relocated to a garage in Fieldston. After a while, the operations became difficult.

There was too much demand for orders that the school thought it was best to keep the pantry on campus. In this effort, they expanded and eased that demand.

“I get to see not only like the effect that it has on myself but also on the students that come down to enter the students that deliver for the pantry,” Seidman said, “It affects how grateful they (students) are for what they have.”

“We also had some people who have said, you know, I really appreciate it. But I don’t need it, and I don’t need the service anymore, which is also very gratifying,” Kroll said.