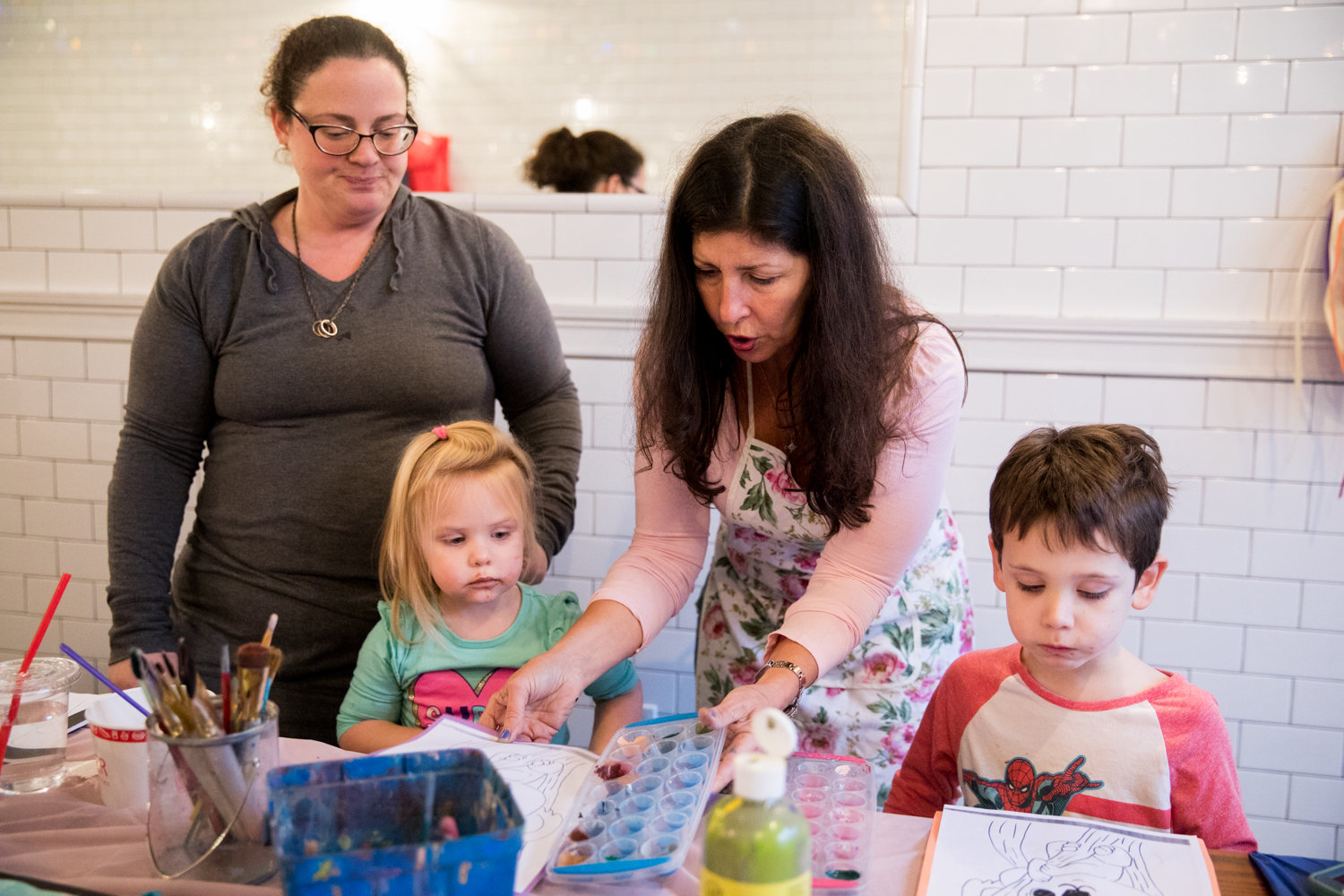 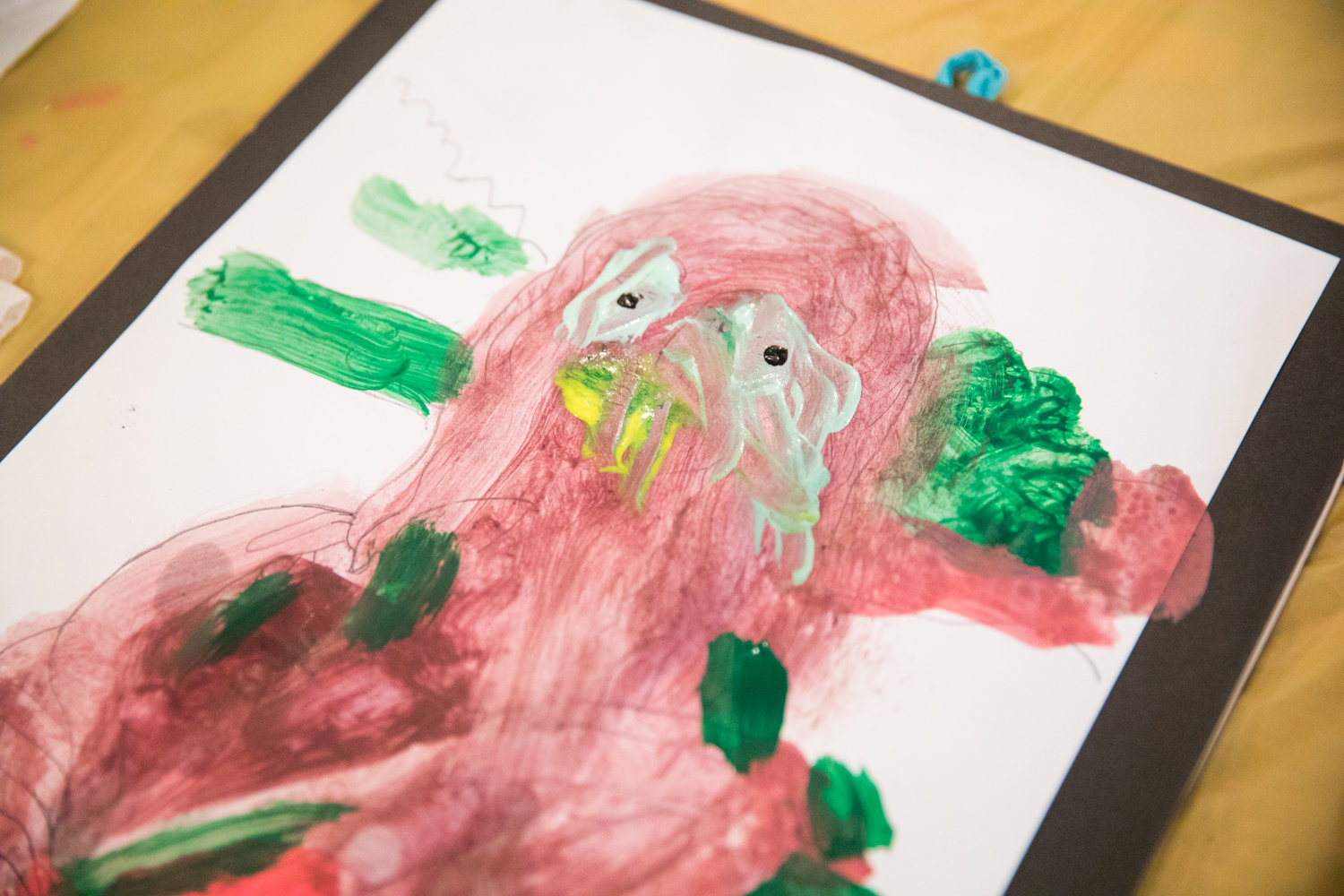 The goal at Cathy Sanacore’s weekly painting workshops at Yo-Burger is for the kids to have fun. During one of her workshops at the Riverdale Avenue eatery in January, she gave the kids drawings of a koala and the Mona Lisa, a finished version of which is seen here, to work from.
JULIUS CONSTANTINE MOTAL 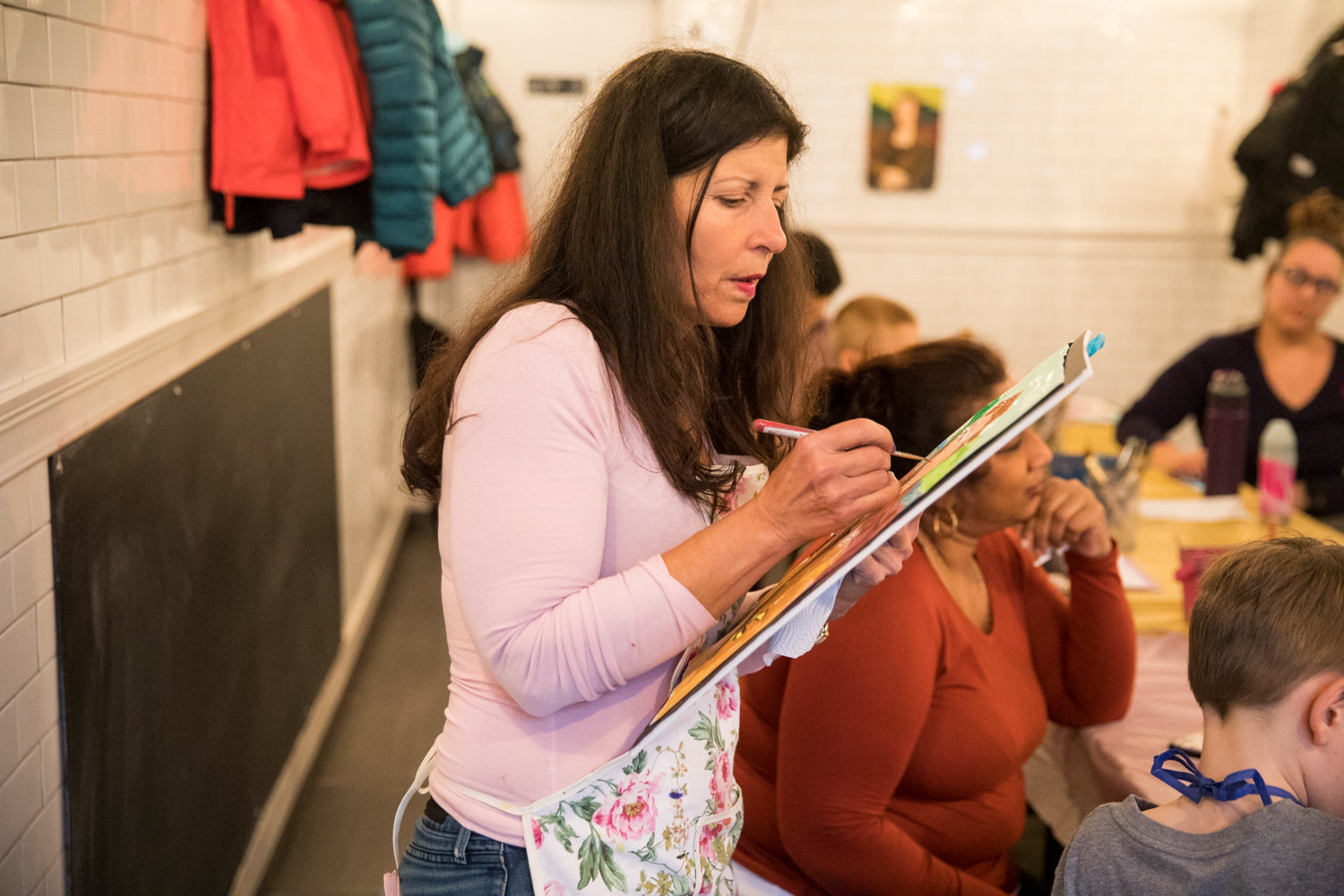 Cathy Sanacore checks a painting during a weekly workshop she hosts for children at Yo-Burger on Riverdale Avenue.
JULIUS CONSTANTINE MOTAL 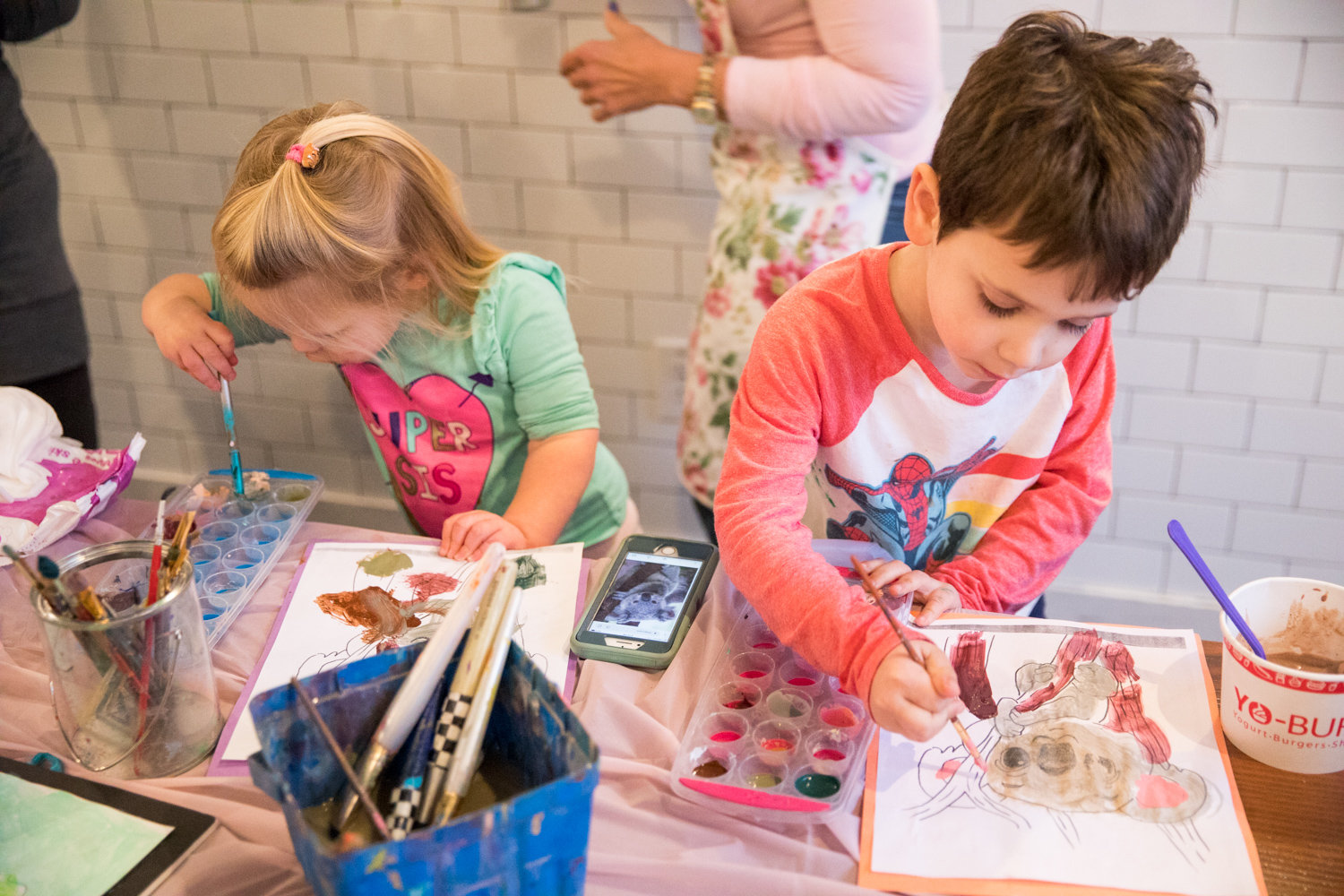 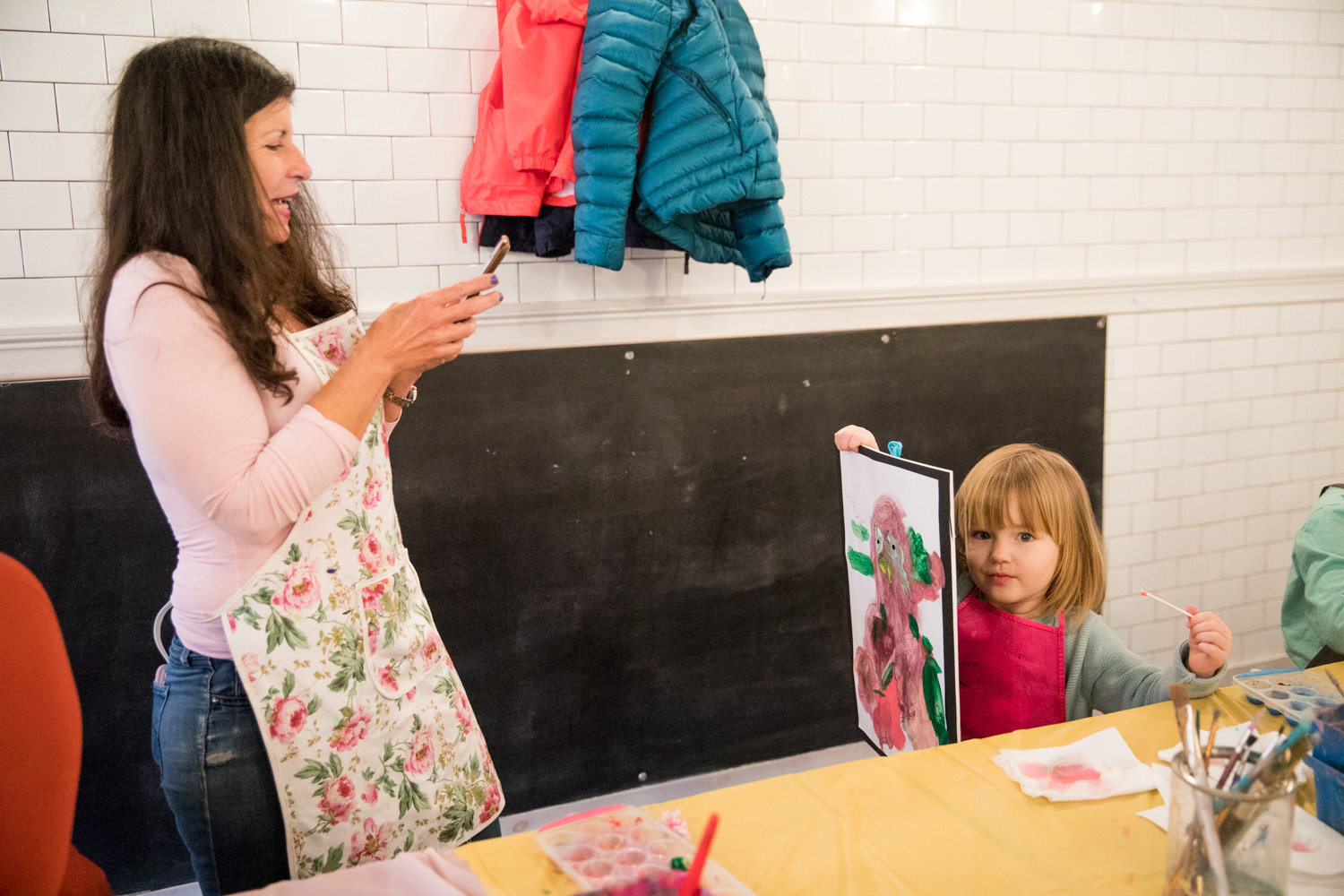 Cathy Sanacore takes a picture of Anna Debonis’ attempt at the Mona Lisa during a weekly painting workshop at Yo-Burger on Riverdale Avenue.
JULIUS CONSTANTINE MOTAL 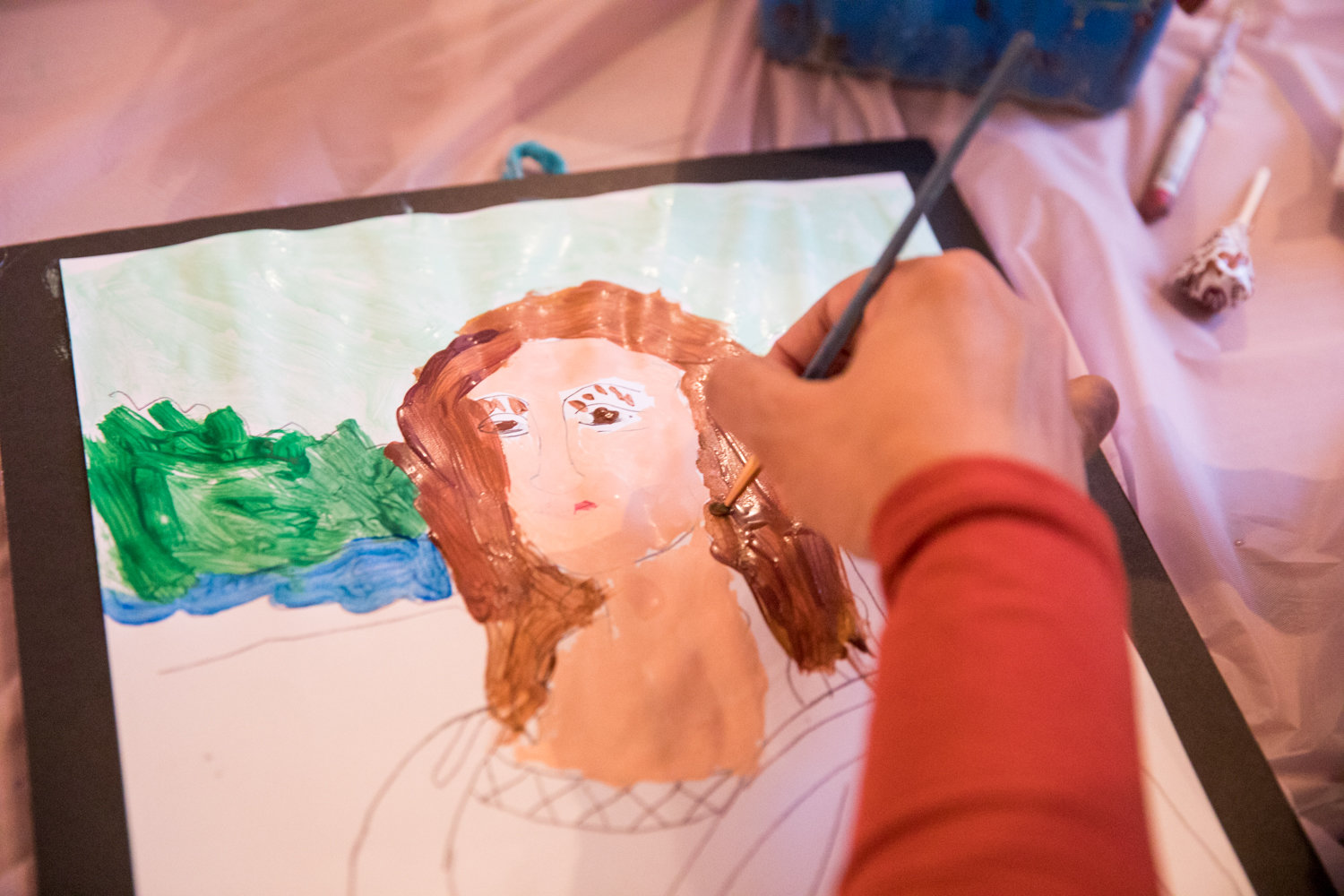 At first glance, some of the paintings looked like reasonable approximations of their source material. Others looked like they were forged in the fever pitch of a dreamlike trance.

The painters were children. The source material was a drawing of Leonardo da Vinci’s oft-ballyhooed painting, the Mona Lisa. The setting was Yo-Burger.

The goal? To paint between the lines. Or across. It didn’t really matter as long as the kids were painting.

Behind it all was Cathy Sanacore, a School of Visual Arts graduate with a two-decade career in sales before transitioning to one as a burger joint art teacher and birthday decorator for hire.

In January, she started teaching art as part of Columbia University’s after-school program.

To be surrounded by children with brushes in hand takes Sanacore back to her childhood, where her lifelong passion for painting and art first took hold.

“I was always the leader with kids in the art department,” she said of her time in grade school.

Art stayed with her while at SVA, until her graduation in 1993. She was the first in her family to go to college.

What followed was a 20-year career in sales where she spent a significant part of it cold-calling potential clients.

“That made me not afraid to do what I wanted to do,” Sanacore said.

With a renewed lease on life and an ambition to bring art to young people, Sanacore and her weekly workshops have become a fixture for neighborhood parents.

Rebecca Zinger first learned of the workshops at the 3726 Riverdale Ave., eatery through a post on social media. The casual nature of it appealed to her, and she figured it would be a good outlet for her children, Ruby and Asher.

“She really allows them to think outside the box,” Zinger said of Sanacore. “They get to paint and just use color and zone out.”

It helps, too, that she can get her kids dinner there after they’ve had their creative fill. Zinger finds that the workshops also provide a kind of third place environment between school and home.

“It’s a little bit like a coffeehouse for kids,” Zinger said. “They have a place where they could just be.”

At the end of it all, there is a sense of accomplishment in the act of creation. Generally, young children don’t have a critical framework through which they can understand their own work.

Their approach is extemporaneous, with no regard for what came before them.

It doesn’t matter if the work is good or bad. They made something.

“They look at it as if it’s beautiful,” Sanacore said.

Witnessing that pride in their work sparks joy for Sanacore, to borrow a phrase from tidying guru Marie Kondo.

“I want to look at my work like that,” Sanacore said. “I’m starting to be able to be softer with myself. I was very harsh with my art.”