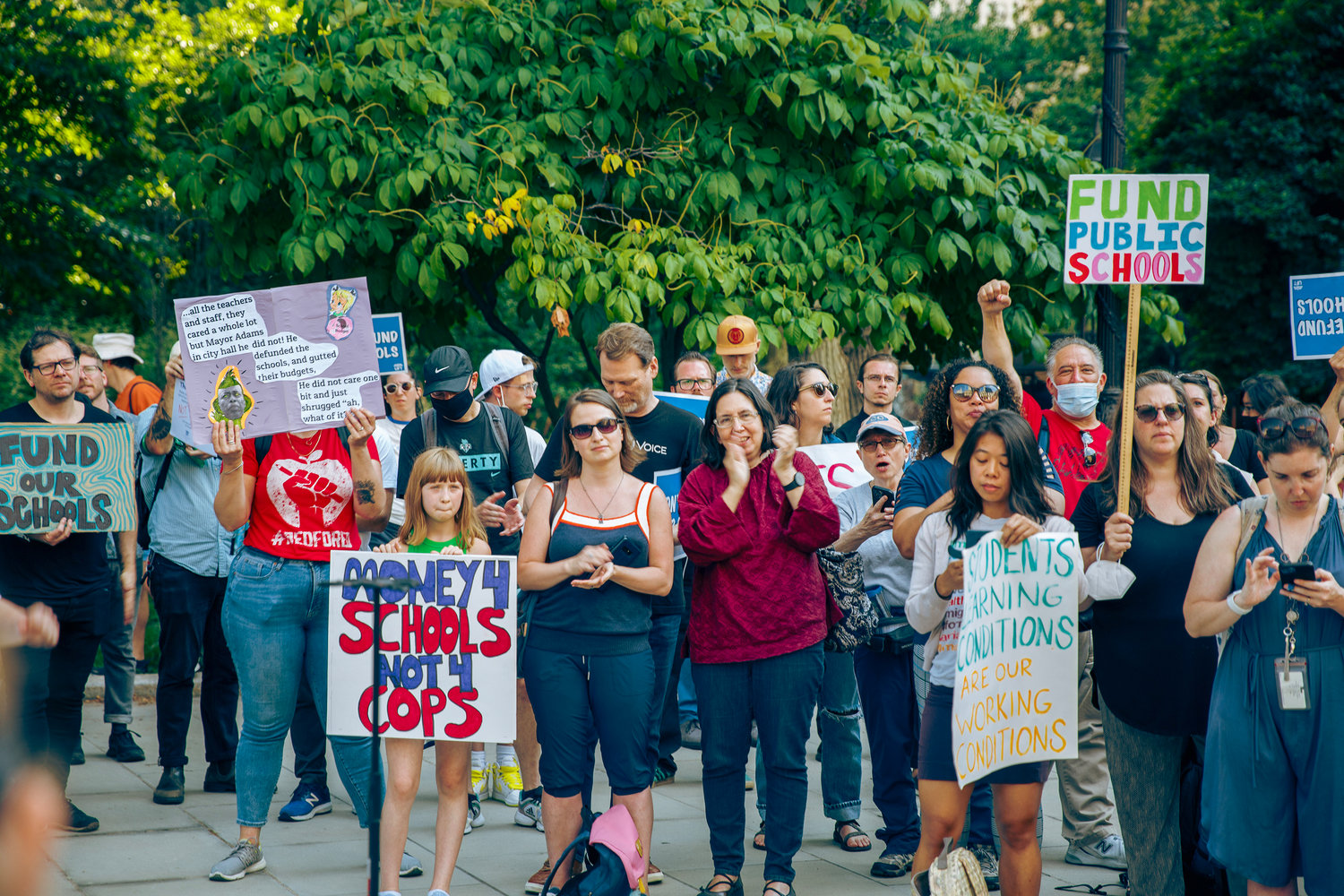 Parents and teachers took a stand in front of city hall in June to protest the decision to cut $215 million from the school budget. They believe it could result in larger classes, fewer programs, and a teacher excess. Among them were Emma Hoff, far left, a student at P.S. 24 Spuyten Duyvil.
Brian Asare / Intern 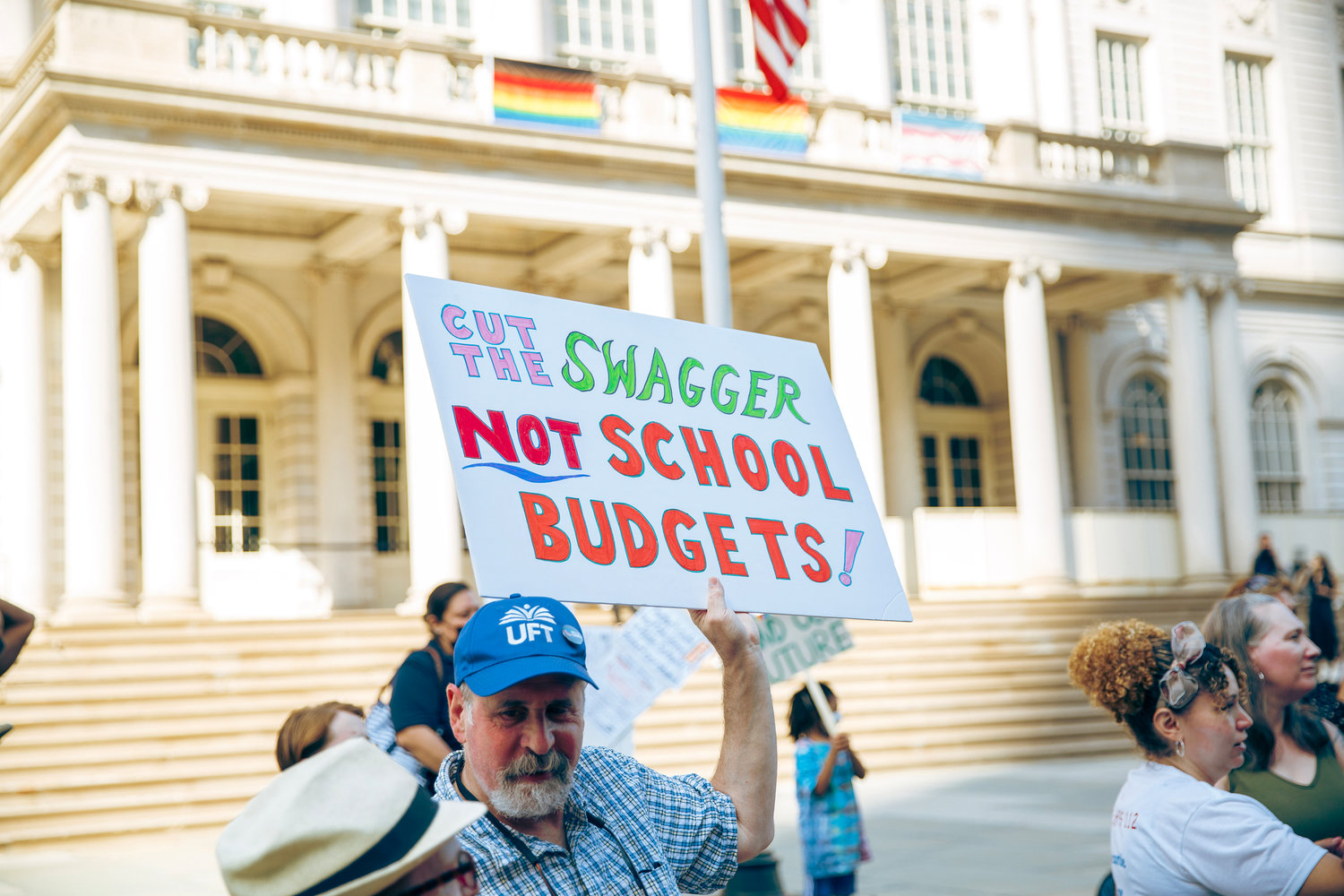 A New York City resident protests outside City Hall last month when the city council and the mayor approved more than $215 million in cuts for the upcoming school year.
Brian Asare / Intern
Previous Next
By Stacy Driks

With the first day of school only weeks away, the status of class sizes, how many teachers will be working, and which extracurricular activities will be kept are still up in the air in the city’s public schools.

Those cuts are expected to affect 1,200 public city schools — about two-thirds of the system. Since the start of the coronavirus pandemic, city schools have lost 73,000 students.

The cuts were part of a deal between the city council and Mayor Eric Adams, creating an outcry by those demanding more funding for schools, not less.

In the meantime, the school spending plan continue under last year’s budget, with a meeting planned for Thursday to try and figure out what to do. Especially if this all isn’t resolved by the time school starts Sept. 8.

Those battling the budget changes say it’s not just about cuts. It is about the lack of oversight by the education board, which they say didn’t get to vote on the plan first.

The suit demands the council and school board revote to ensure a legal process is followed. Nearly 70 parents and teachers spoke out at the recent education board meeting, detailing what they described as the profoundly damaging impact the cuts will have on their school.

“The explicit language of state law requires that these egregious budget cuts be halted and reconsidered by the mayor and the council, because the law was not followed,” said Laura Barbieri, an attorney with Advocates for Justice, who represents the plaintiffs.

Barbieri told The Riverdale Press, schools could face more cuts than what the administration detailed due to declining enrollment as the school year begins.

Based on a formula Adams is using to determine how many teachers should be at particular schools, city comptroller Brad Lander said the actual cuts could grow to $469 million.

If the budget cuts go as expected, some teachers will finally learn if they will be “excessed.” Adams labels those “excesses” as adjustments — teachers are losing their positions, the mayor said, not their paycheck.

One plaintiff, Brooklyn elementary school music teacher Paul Trust describes himself as one of Adams’ “adjustments.”

“My students thrive and are empowered through music,” he said, in a statement, “Many continue to pursue their passion in middle school and beyond.”

In the meantime, his school is losing its entire music program because of more than $500,000 in cuts.

“I hope this will not be the last year I am able to continue to serve the school community I love,” Trust said.

“We have about two extracurricular activities in our school, and that is band and choir. And we’re losing one of those.”

“For my daughter, academically … it wasn’t her thing,” said Barbieri, the Advocates for Justice attorney. “But she was good in art, and thank God for her art teacher because that’s how she blossomed.”

Extracurriculars are beneficial for students, especially in a time of stress, Barbieri added. Sometimes, children need the time to rest their brain from reading, writing and mathematics.

Barbieri claims that it will not affect anything for the school system. Schools and teachers can continue to make arrangements, even though nothing is official.

“For example, just think of the word ‘budget’ — a budget is a plan,” she said. “ They can plan to spend, but they’re not actually spending money until September.”

Schools Chancellor David Banks argued in an affidavit on last week’s court appeal that the restraining order is vague and places school preparation in limbo.

“I am gravely concerned about our ability to assure the orderly opening of schools this September,” Banks said.