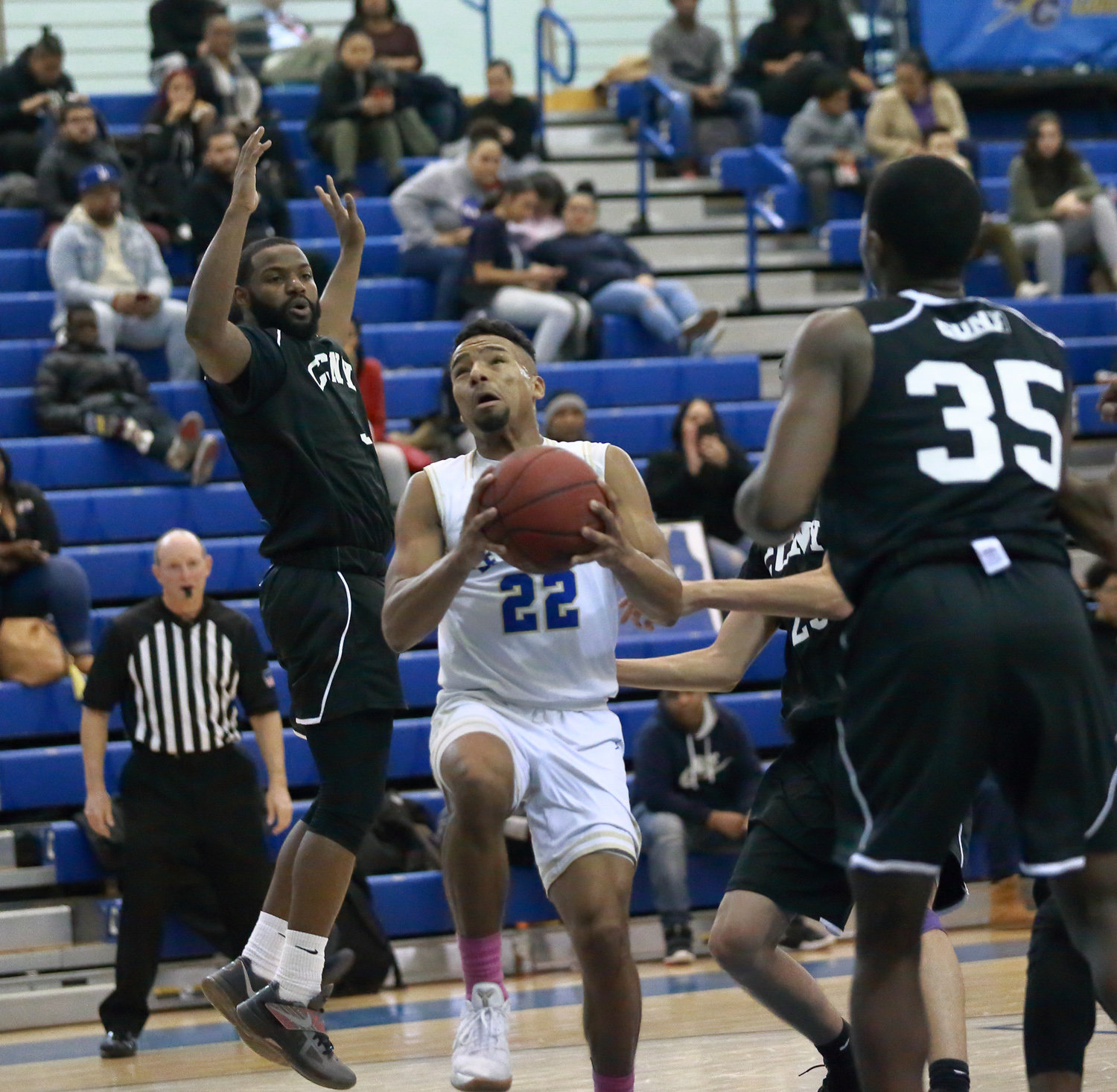 Lehman’s Tommy Batista scored a combined 32 points in the Lightning’s two victories last week, including a 22-point outing in a playoff win over Medgar Evers.
Courtesy of Lehman College 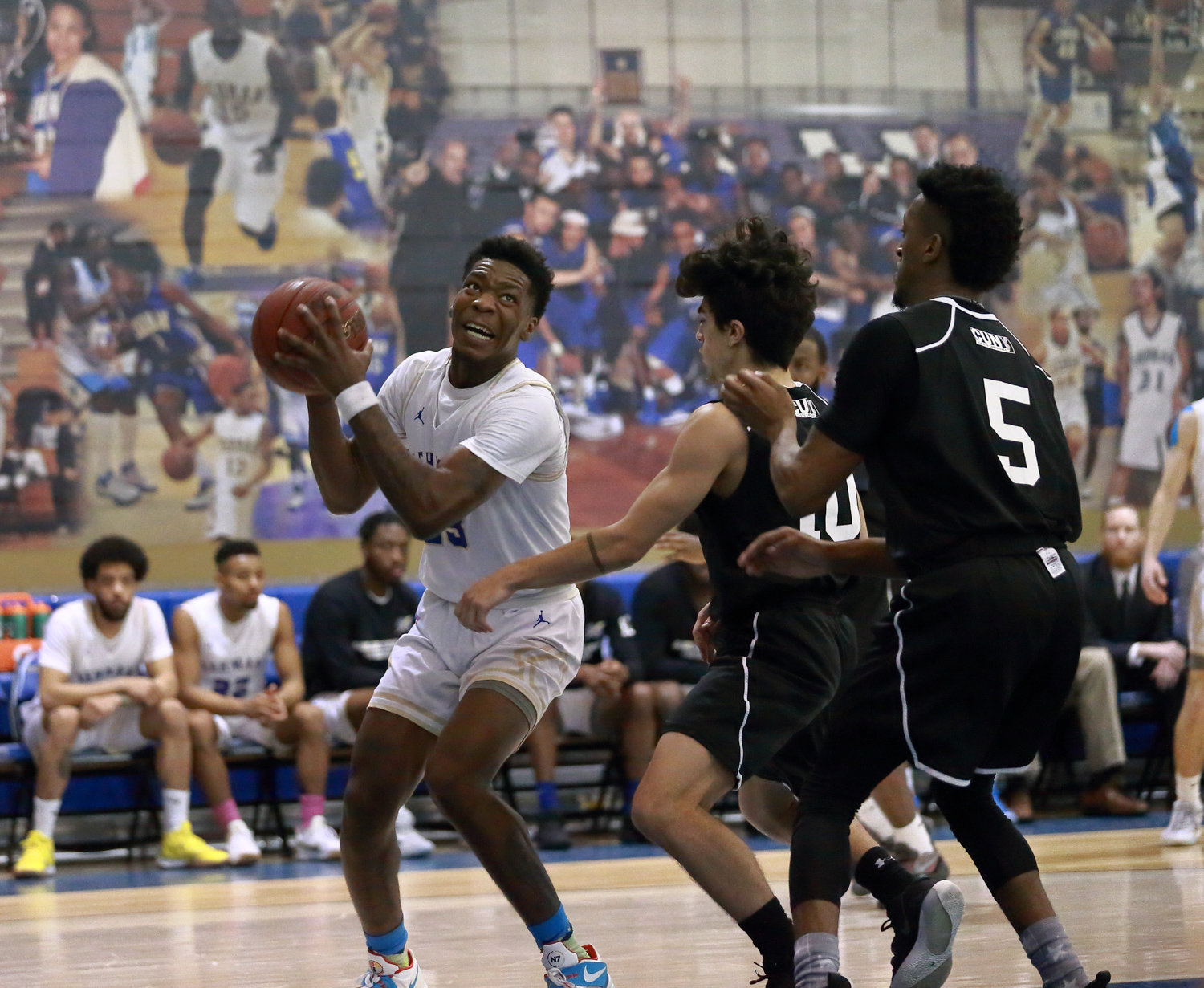 All in all, it was good to be the Lehman Lightning last week.

The Lightning’s excellent adventure began with their CUNY Athletic Conference regular-season finale — one that not only honored players Tommy Batista and Angel Nunez on Senior Night, but also gave long-time head coach Steve Schulman the 300th victory of his career after Lehman took care of City College, 73-56.

That win gave the Lightning the No. 3 seed in the CUNYAC postseason tournament, and a home game against No. 6 Medgar Evers, a team Lehman easily defeated twice during the regular season. But would the third time finally be the charm for Medgar Evers last Saturday?

Not by a long shot.

After initially falling behind 4-0 to open the game, the Lightning went on a 49-24 run during the rest of the first half to take a 21-point lead into halftime before cruising to a dominating 97-65 victory in the CUNYAC quarterfinals at the Apex. Lehman moved on to face No. 2 Baruch in the semifinals, which were scheduled for Feb. 25.

After the victory over City College, Schulman talked about his pursuit of his 300th win, and whether he thought he’d reach it this year.

“But then right before our game with Hunter (on Feb. 10), I started thinking, ‘Yeah, maybe I can do it this year.’”

A 19-point performance from Isaiah Geathers and 16 from Gian Batista helped put No. 300 in the books for Schulman, and then it was off to the postseason.

And the verdict in their quarterfinal opener was never in doubt for the Lightning as Tommy Batista made the final home game of his Lehman career a memorable one. The senior guard drained five three-pointers, three of those coming in the first half, as the Lightning built a 49-28 lead at intermission. Lehman then finished off the Cougars early in the second half as their lead swelled to 30 points and Medgar Evers was done. Batista finished with a game-high 21 points.

“It got away from them quickly,” said Lehman guard Will Feldman, who had eight points and three assists. “We wanted to make sure that in those first five minutes of the second half they would have no chance to win the game. We just wanted to take any confidence they had away from them and secure the W.”

Both Feldman and Schulman were thrilled for Tommy Batista to go out in style.

“We all knew it was his last home game so we definitely wanted to get the win for him,” Feldman said. “I knew from the beginning of the game that Tommy was going to come out with energy and ready to play. We count on him for that every game.”

“That was awesome,” Schulman said. “He’s worked so hard, and to see all those threes going down — especially in the first half — it was just great to see.”

Lehman moved into the semifinals for the first time since 2018. The Lightning advanced to the championship game that year, but lost 77-75 to Staten Island.

But to get back to that title game this season they will have to knock off a Baruch team they split wins with during the regular season. However, Lehman lost by 35 to Baruch on Feb. 15, so that wound is still fresh.

“We still feel confident,” Feldman said. “They clearly got on us last time when we got blown out. But I think in that game we just weren’t mentally there. But I will say for sure that we will be there for this game, and be ready to play.”

Schulman, now with 301 career victories, also expected a different Lehman team to show up for the semifinals. One with a little more edge to it as it chases its first CUNYAC title since 2004.

“I hadn’t had one like that in a long time,” Schulman said of that lopsided loss. “I couldn’t remember one that bad. I’ve been down 30 (points) before, but I don’t ever remember being down 40. It was just one of those days. We were flat as a pancake.

“But our motto for this game is, ‘play angry.’ We were really embarrassed that day. But this time I think we’re going to come in with a little chip on our shoulders, and with something to prove.”