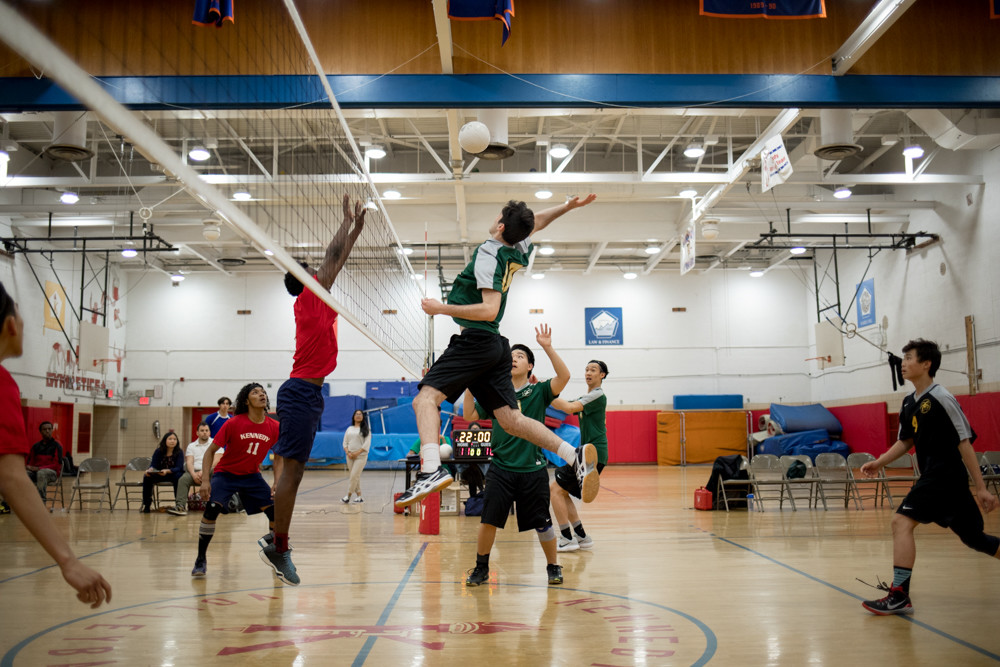 Bronx Science’s Jake Goldsmith gets ready to deliver one of his five kills in the Wolverines’ straight-set victory over Kennedy.
JULIUS CONSTANTINE MOTAL 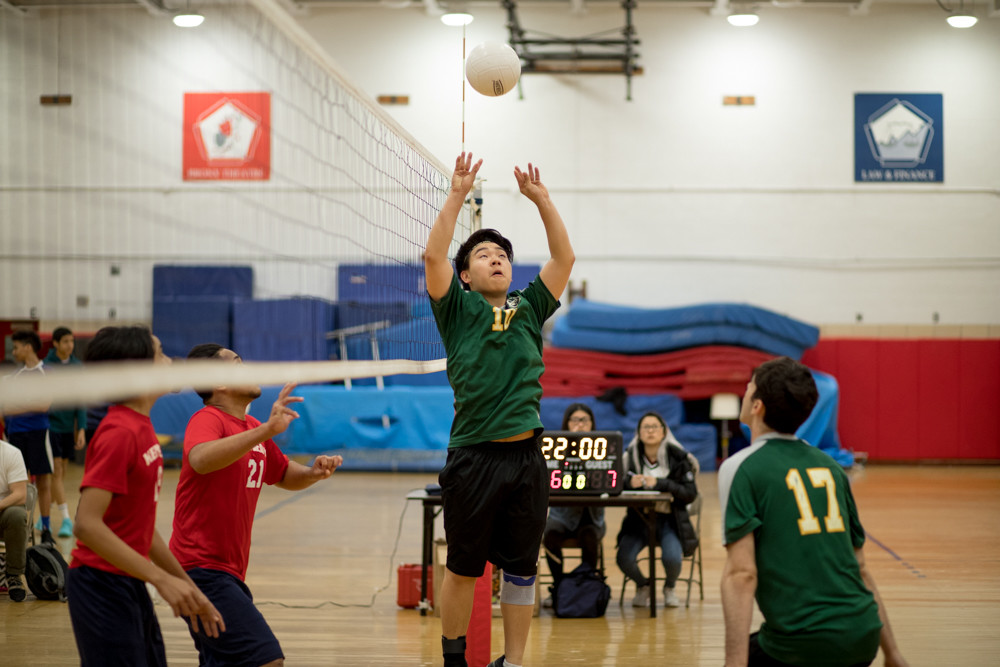 Bronx Science sophomore Ethan Chen sets up Jake Goldsmith with one of his 16 assists in the Wolverines road win at Kennedy.
JULIUS CONSTANTINE MOTAL
Previous Next
By SEAN BRENNAN

Derek Peng was anxious to get started.

The Bronx Science senior volleyball player was in need of an outlet for his pregame exuberance, so he decided broad jumping a chair on the Wolverine bench would be an appropriate way to vent that energy.

And while it didn’t go as well as Peng had planned — he failed to clear the chair as it collapsed beneath him — he did manage to stick the landing.

But that was about the only thing that didn’t go according to plan for the Wolverines as they continued their dominance in the Public School Athletic League, taking down John F. Kennedy Campus 25-14, 25-13. That ups their season record to 7-0 in the Bronx A Division.

But even as Science sits with an unblemished record and a one-game lead over Walton in the division, Wolverines head coach Dan Skilins was still not overly enthused with his team’s performance.

“You could see that at times during the match we were stagnant,” Skilins said. “Then we get out of that mediocrity place, that stagnancy, and then we start rolling points. I feel like we can play with anybody when we’re focused, when we serve in and we handle our blocking system and we run an offense. But we love to complicate things.”

Science did seem to be mired in that mediocrity in the first set when it was locked in a 6-6 tie with Kennedy and still leading only 11-10 midway through the set. But then the Wolverines seemed to just flip the switch, and in a blink of an eye, Science was up 20-12 en route to the comfortable win.

The second set also saw Science get off to a slow start as the Wolverines trailed 5-4 early on. But again, Science hit its stride by scoring the next seven points to take a commanding 11-5 lead before locking up the victory in straight sets.

Despite his gymnastics mishap prior to the game, Peng was dominant in the win, logging 11 kills, five digs, six service points, three aces and three blocks in the victory. And Peng thinks this Science team has a chance to be a special one this season.

“I think we definitely have the potential to be one of the best teams in the city,” Peng said. “Talent-wise and on paper, we are one of the best. It’s just about being a cohesive unit and playing as a team, not six individuals. As for the rest of the season, I just want to get the team camaraderie real strong so that we have that trust with each other on the court.”

Science’s recipe for success is not a complicated one, Skilins said.

“Let’s try and keep it simple the rest of the way and focus on our blocking, focus on getting the ball to Derek and Jake (Goldsmith) and John (Ragaishis) in the middle, and have our outsides produce,” the coach said.

And Skilins couldn’t be more happy with his setter, sophomore Ethan Chen, who finished with a team-high 16 assists.

The victory was all the more impressive because Science played without senior Ethan Rhabb, who was on a college visit. Not a problem, Peng said.

“Ethan is one of our co-captains, but everyone on this team understands that when you get on the court, everyone has to step up when they get their turn,” he said. “All our players are ready to play, and just because one of our captains was missing isn’t going to change the way we play.”

With just two games left in the regular season — including a huge road matchup against second-place Walton on Friday — Science is zeroing in on its fourth straight division title.

“That’s the minimum,” Skilins said. “Winning the division is the minimum. Every year the goal is to get into the top four in the city, and then win the semis and take a shot at the championship. That’s why they brought me to Bronx Science, and these students know that. There is a certain level of excellence that we’re shooting for and that’s the goal. It’s good to have goals in your life.”

And Peng’s goal is to get that championship trophy before he leaves the school.

“The goal for us every year is to go to the playoffs and hopefully win a championship,” said Peng, who has been part of the last three division winners.

“And I believe this team can do that.”